Geoviews is a Python library that lets us plot our geospatial data on Maps. It let us create maps like choropleth maps, scatter maps, bubble maps, etc. Geoviews is built on the top of the library named holoviews. It let us declare metadata about our map and then uses this metadata to create maps. It does not create maps on its own, instead, it uses one of the bokeh or matplotlib as a backend to create maps. We can set whichever backend we want to use using geoviews and then it'll create maps using that backend. The maps created using bokeh will be interactive maps whereas the ones create with matplotlib will be static maps. As a part of this tutorial, we'll explain with simple examples how we can create scatter and bubble maps using geoviews. We'll be using datasets available from geopandas and a few from the internet to create maps in our tutorial. We have already covered the tutorial on creating choropleth maps using geoviews. Please check the below link if you want to create choropleth maps.

If you are interested in learning about holoviews on which geoviews is based then please check our tutorial on it. It'll help you with this tutorial as well.

We'll now start our tutorial by importing geoviews and printing the version of it.

We'll first load a few datasets, to begin with. We'll be merging a few of these datasets as per our need to create maps.

The first dataset that we have loaded below is the world geometry dataset available from geopandas. It's an object of type GeoDataFrame which has information about the geometry of each country of the world. It has information about polygon/multi-polygon objects for each country of the world which will be used to plot countries on the map. We'll be using this dataset to create a world map and then plot points/bubbles on it.

If you want to learn about geopandas then please feel free to check our tutorial on it.

The third dataset that we have loaded has information about stores of Starbucks worldwide. It has Longitude and Latitude of each store. Apart from this, it has information like store name, address, city, state, country, postcode, phone number, etc. We have loaded this dataset as simple pandas dataframe. The dataset can be downloaded from the below link.

In this section, we'll explain how we can create scatter maps using geoviews. We have first set backend as bokeh using extension() method of geoviews. We can use the same method if we want to use matplotlib as a backend for our maps.

Our first scatter map shows locations of Starbucks stores on the world map. In order to create a world map, we have used Polygons() method. We have given it the world geo dataframe that we had loaded earlier using geopandas. This will create an empty world map. We have explained in detail how Polygons() method work in our tutorial on choropleth maps using geoviews.

In order to plot points on the map showing locations of Starbucks stores, we need to use Points() method of geoviews. Below we have given a definition of the method for explanation purposes.

After creating a world map using Polygons() method, we have created the plot of points using Points() method by giving it the Starbucks dataset that we loaded earlier. We have asked it to use Longitude and Latitude columns for kdims parameter and Store Name and City columns for vdims parameter. As Store Name is a column with string values, all points will be of the same size.

We have then merged the world map created using Polygons() with points plot created using Points() using simple multiplication. This is the standard way of combining more than one plot in library holoviews on top of which geoviews is built. We recommend that you go through our tutorial on holoviews to understand this if you don't have a background on this.

Apart from creating a map, we have set modified various map attributes like height, width, title, points color, points size, opacity, etc. We have done that in two ways. Holoviews lets us modify various attributes of maps in two ways. 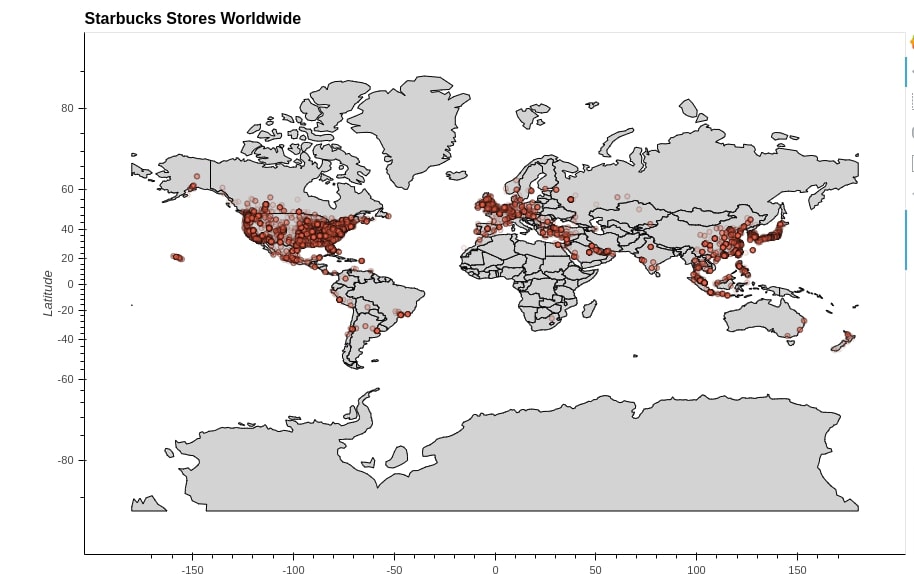 In this example, we have again created Starbucks stores scatter map but this time we have created a background map using tile service provided by bokeh. There are various geo tile providers which present different types of information on the map and we can add that information to our map by just adding that tile to our map. The tile can have information like world countries’ names, a terrain view, midnight view, topographic view, ocean view of the world.

Please make a NOTE that we have set a few options of Points using cell magic command this time. 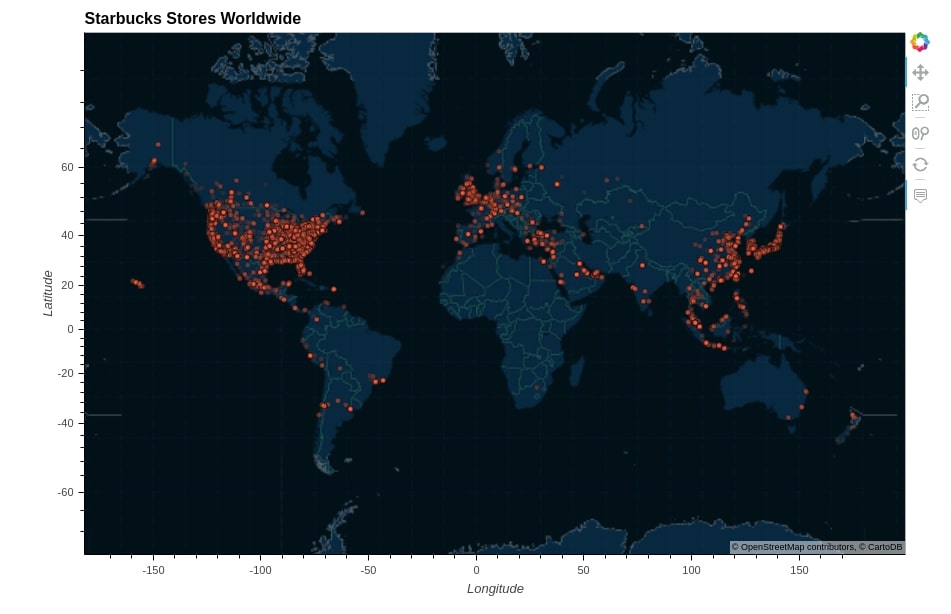 In this example, we have created a scatter map showing Starbucks store locations across India. We have created points on a map using Points() method by giving it a filtered Starbucks dataframe where only entries for India are present. All of the remaining code is almost the same as our previous examples. This time we have used Wikipedia tile for showing the background map as it has little more information. 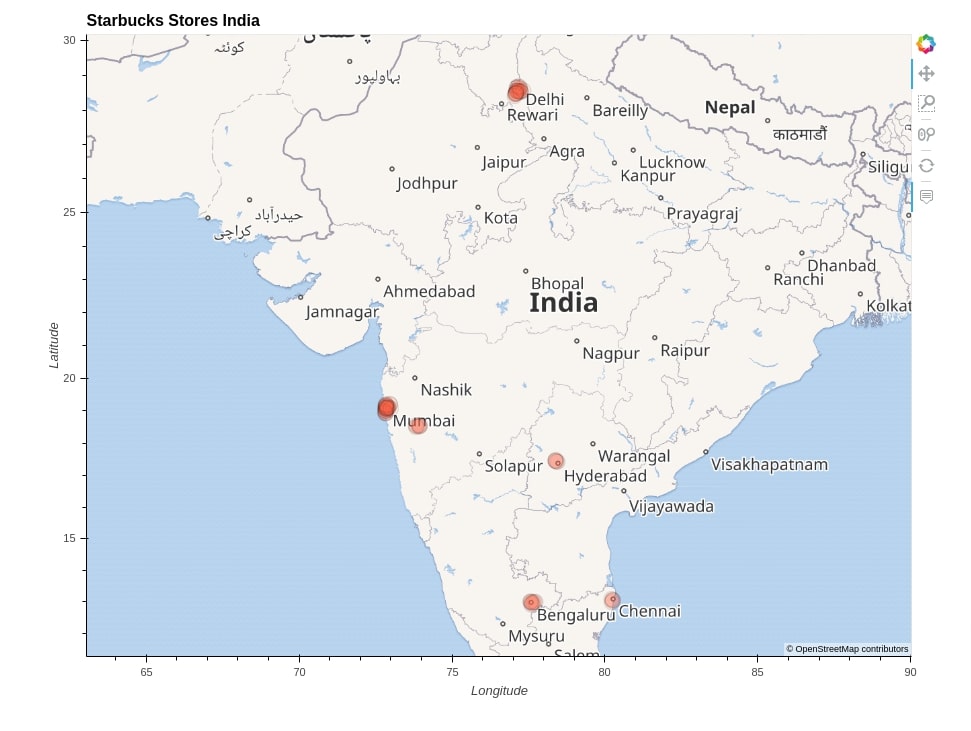 Now, we'll explain how we can create a bubble map which is just a scatter map with points of different sizes to represent another dimension of data.

The first bubble map that we have created shows the population of US states on the US map. In order to create this map, we have loaded and merged a few datasets.

Below we have loaded the first GeoJson dataset which has geometry about the shape of each US state. We have loaded the GeoJSON file using geopandas. The final resulting dataset is geopandas GeoDataFrame where geometry column holds polygon/multi-polygon objects representing individual states of US.

Below we have loaded US 2018 population from a CSV file using pandas.

At last, we have created a bubble map showing the population of US states in 2018 using Points() method by giving it the merged dataframe that we created earlier. We have set a few options of char using cell magic command and a few using opts() method.

We have merged the points chart with Wikipedia tile to create the final US population bubble map. 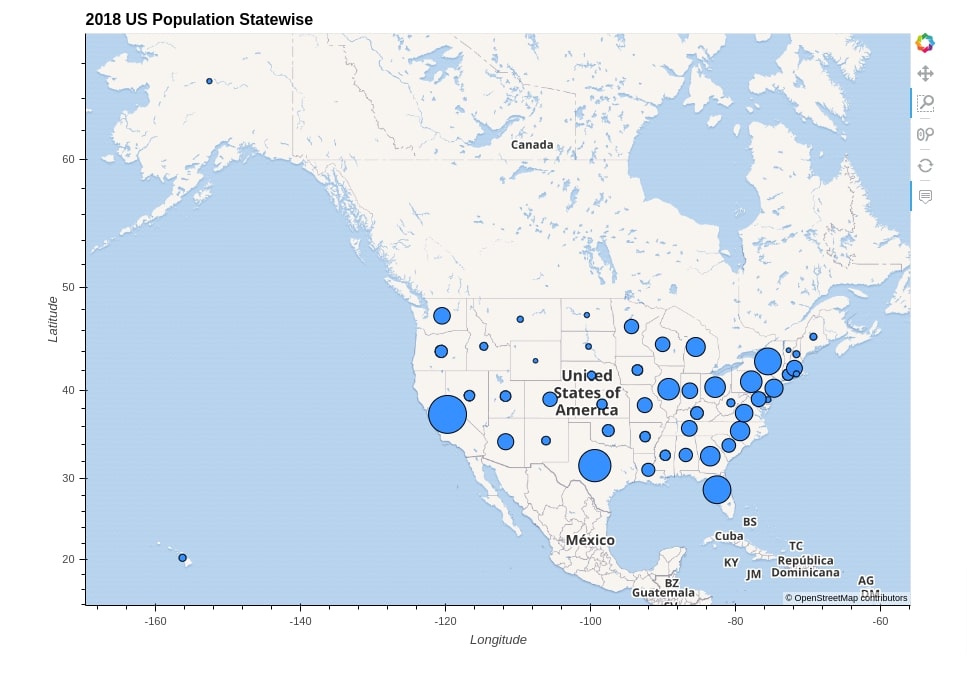 In this example, we have created a bubble map showing the GDP of various countries on the world map. In order to create this map, we have loaded and merged a few datasets which we'll explain next.

Below we have merged the world geo dataset with the world happiness dataset, both of which we had loaded at the beginning of the tutorial.

Below we have first created bubbles of map using Points() method giving it world happiness merged dataframe which we created in the previous step. While giving the geo dataframe, we have removed geometry and center columns to avoid confusion and errors. We have asked the method to use Longitude and Latitude columns for drawing bubbles and use gdp_md_est column to decide bubble size.

At last, we have merged the point chart that we created with EsriNatGeo tile to create the final bubble map. The map background comes from the tile. 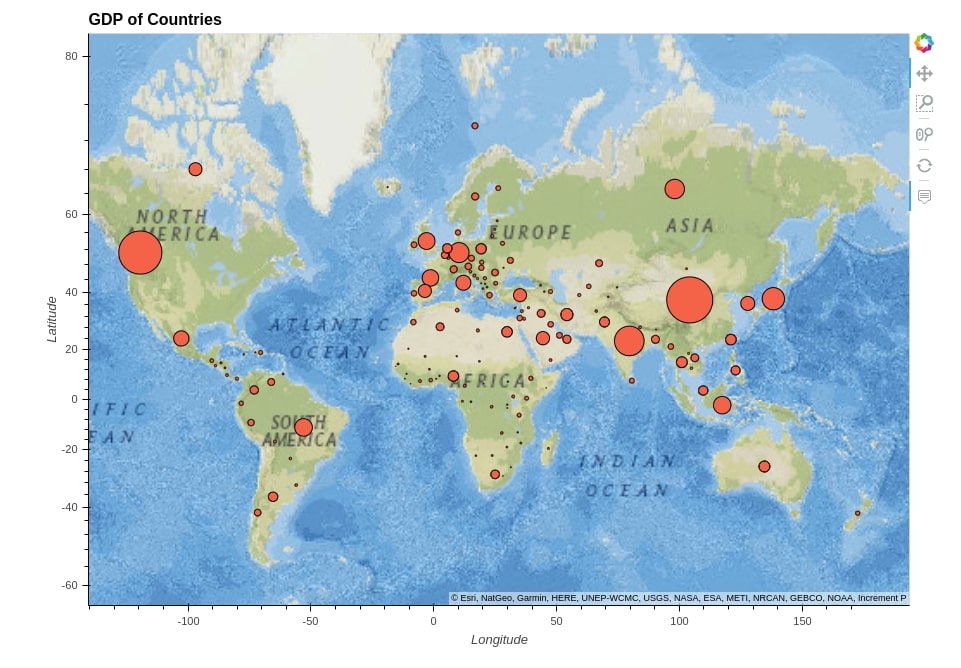 The last bubble map that we'll create will show the number of Starbucks stores per US state. The size of the bubble will be based on the number of stores in that state. In order to create this map, we have modified and merged a few datasets which we have loaded earlier.

First, we have filtered our original Starbucks dataset to keep only entries where the country is the US. We have then retrieved the count of stores per US state by using the grouping functionality of pandas. The final dataframe will have code for each state and store count.

Now we have merged the US state’s geo dataset (US Population Bubble Map Section) which we had created earlier with the state's store count dataset from the previous cell. The resulting merged dataset will have the longitude and latitude of the center of each US state and Starbucks store count as well. We'll be using this dataset for the creation of our last bubble map.

Below we have first created a bubbles chart using Points() method by giving it a merged dataframe from our previous cell. We have then merged this bubbles chart with Wikipedia tile to bring the map background into the chart. As usual, we have set various chart options using the cell magic command and opts() method. 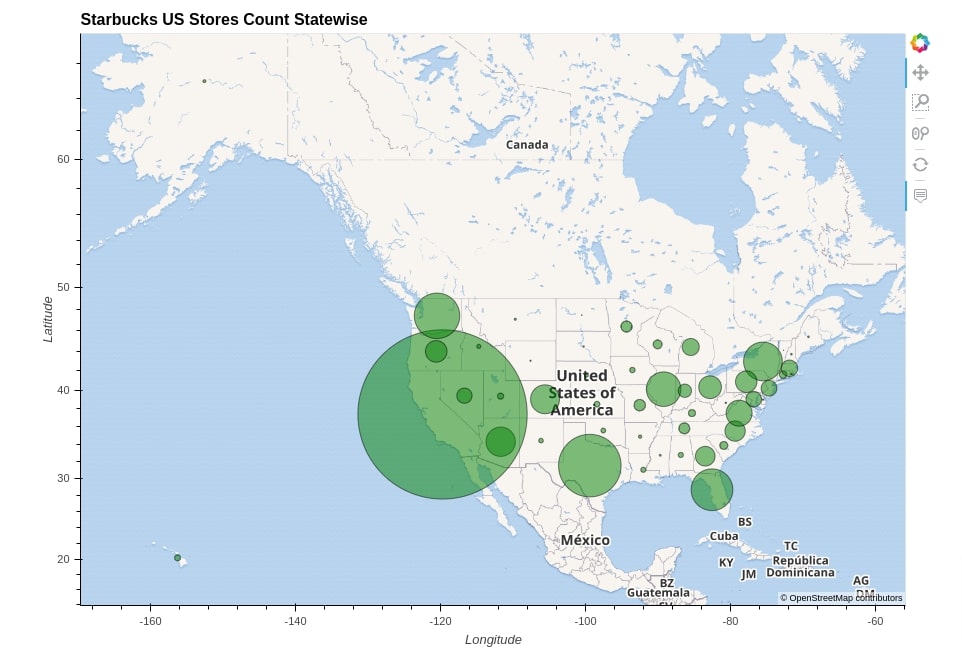 This ends our small tutorial explaining how we can create scatter and bubble maps using geoviews. Please feel free to let us know your views in the comments section.