folium is a python map plotting library based on leaflet.js. After manipulating data in python, we can visualize it on an interactive map using folium. folium has a number of rich tilesets from OpenStreetMap, Mapbox, and Stamen, and supports custom tilesets with Mapbox or Cloudmade API keys.

We'll start by showing a few examples of how to load maps with just single latitude and longitude. Below we are loading Surat city from the Gujarat State of India from where coderzcolumn developers belong. 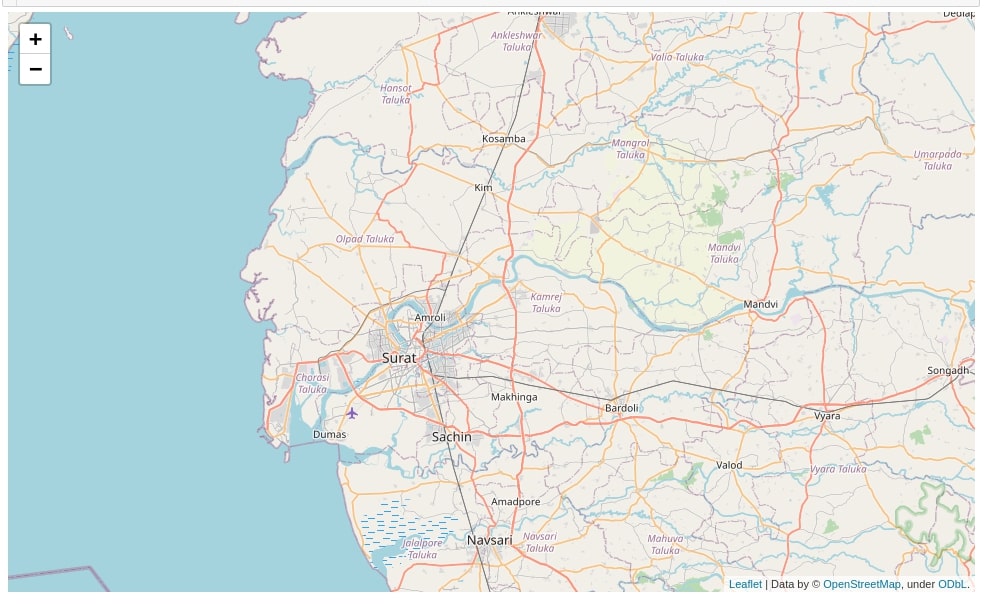 Folium provides a list of tiles as mentioned below. We'll need APIs for using Cloudmade and Mapbox tiles.

Below we are loading again same city map with tile Stamen Toner. 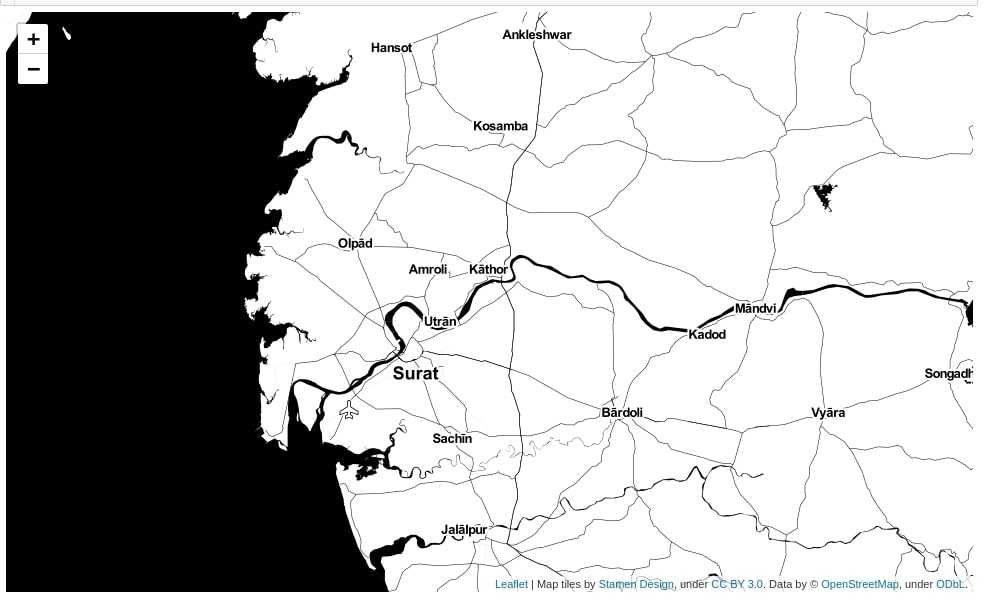 Another map with Stamen Terrain tile. We have also added LatLongPopup to map so that it brings in a popup at a location in a graph where you click displaying Latitude and Longitude of that location. 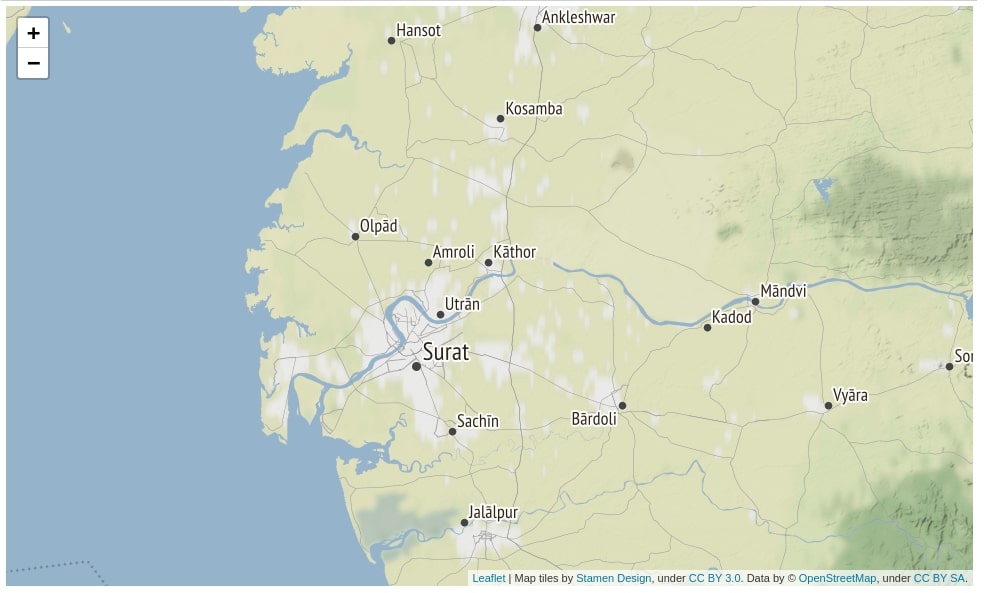 Below we have loaded another map by taking center latitude and longitude for India and then have set bounds to cover in a map using FitBounds. 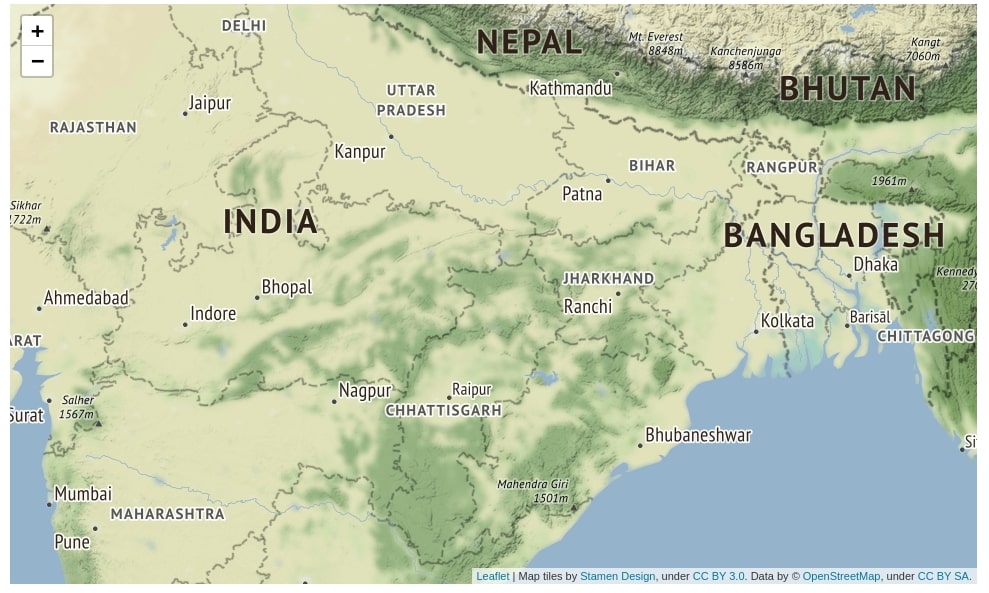 We are plotting a state-wise census bubble chart for India using CircleMarker. We also have used tooltip and popup for displaying a count of the population for states. We also have taken population count to calculate the radius of the bubble by dividing it by 1e7 so that it stays within bounds and does not flood on map. 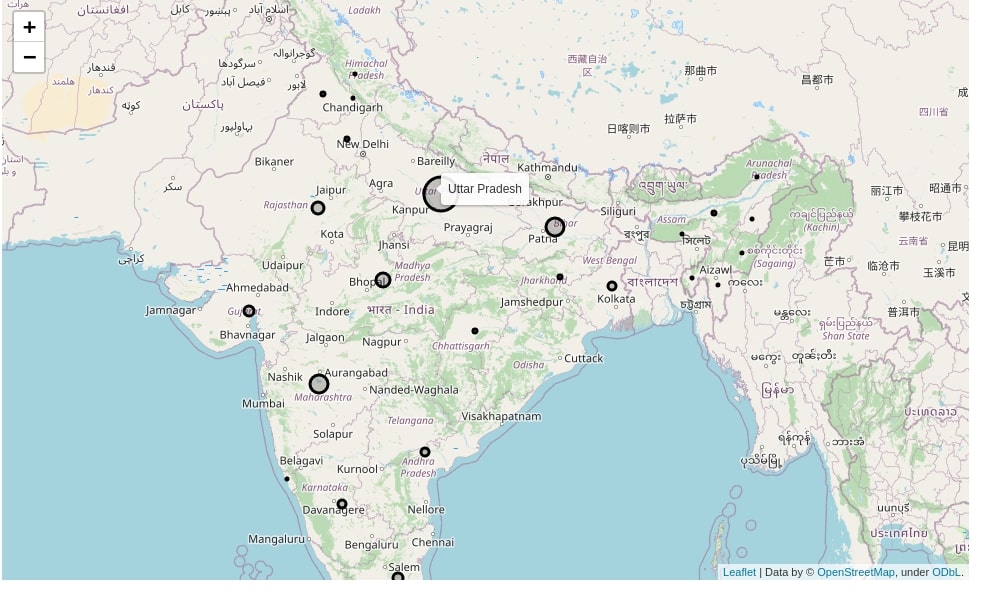 We have again plotted a map with a statewide census of India. We have used rectangle this time instead of circles. 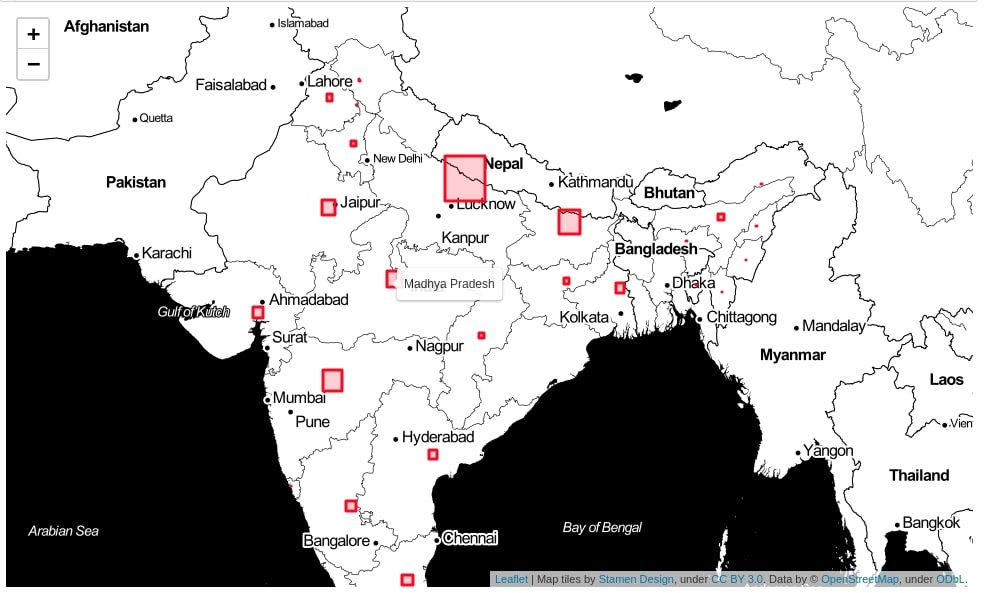 We have first calculated the US states Starbucks store counts. We have then taken an average of latitude and longitude for the location of stores in each state. We are then plotting a scatter plot on it using CircleMarker where circle size represents a number of stores. 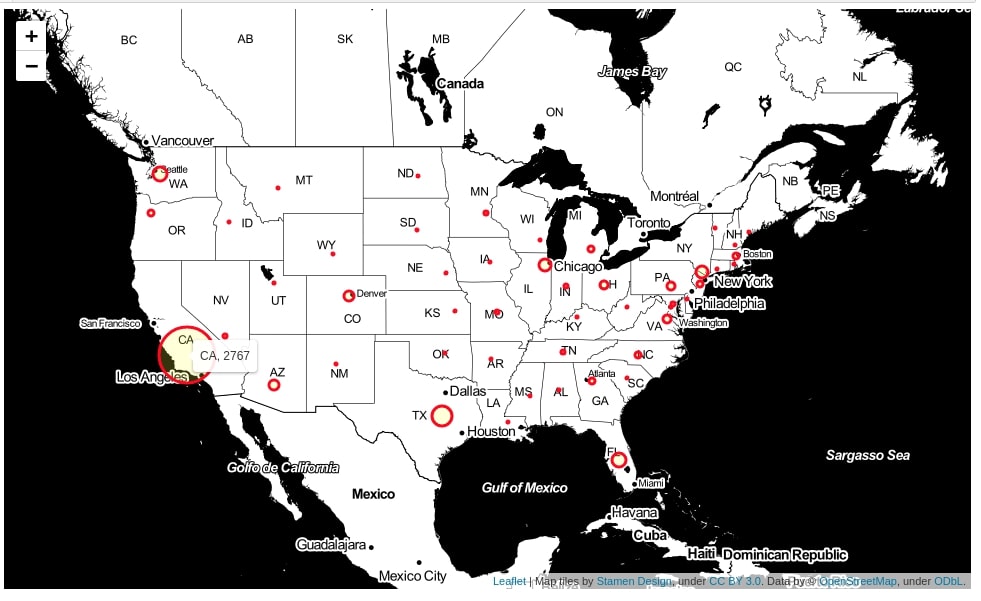 Please make a note that if you are plotting too many points like more than 1k points and try to display it in jupyter notebook then it won't render due to some limitation of chrome/notebook. If you are plotting too many points and jupyter notebook is not displaying output then it's a better idea to save the map as HTML file and open it in chrome to see output.

We have created another scatter map that represents district wise census for the Gujarat state of India. We have used tile CartoDB dark_matter for this chart. Each bubble in the map represents the population of that districts. We have also used tooltip and popup for displaying census of the district. 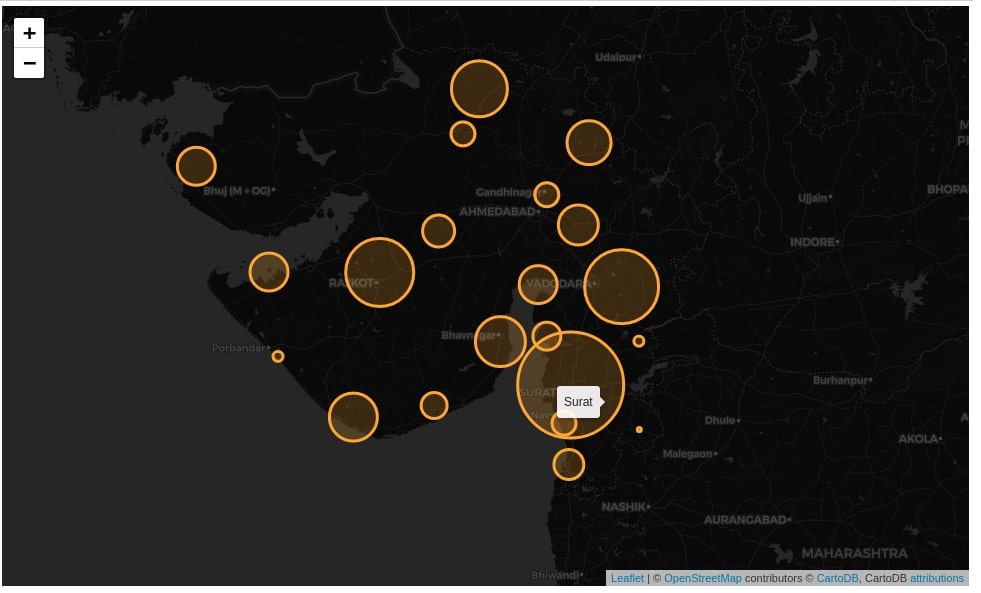 The below the map is almost the same as above map with bubbles replaced by RegularPolygonMarker. 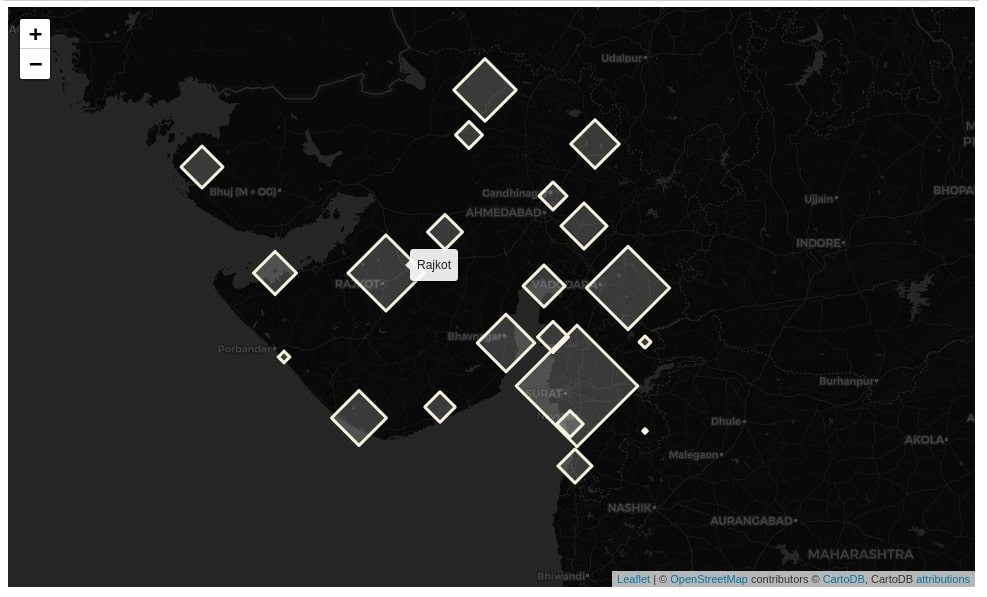 We have plotted a map with markers on various districts of Gujarat state of India. We have also used popup and tooltip to display census for district in 2011. 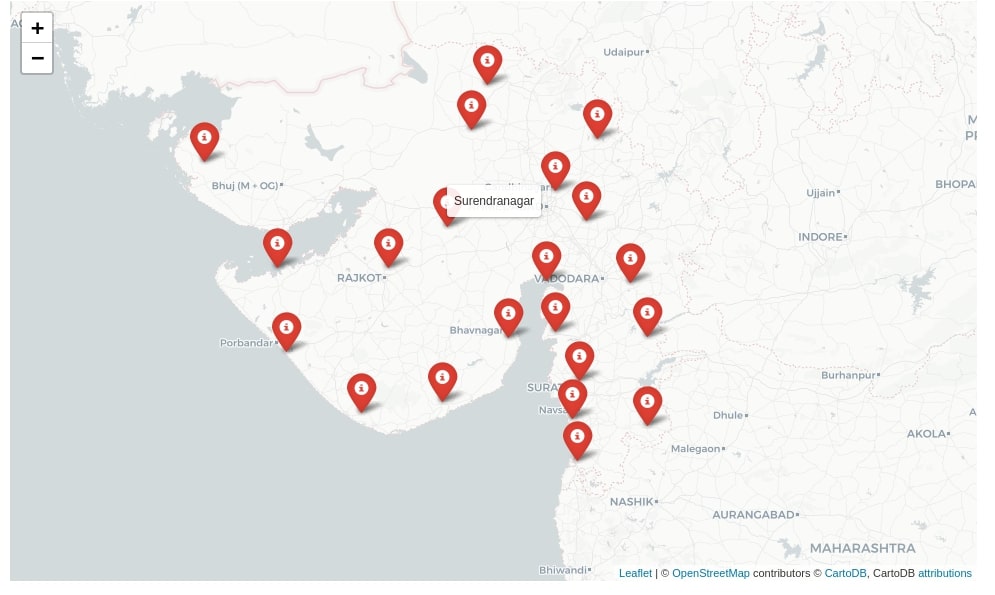 Below we are using markers on the new york city map where each marker represents the Starbucks store. We have also used popup and tooltip which displays store address. 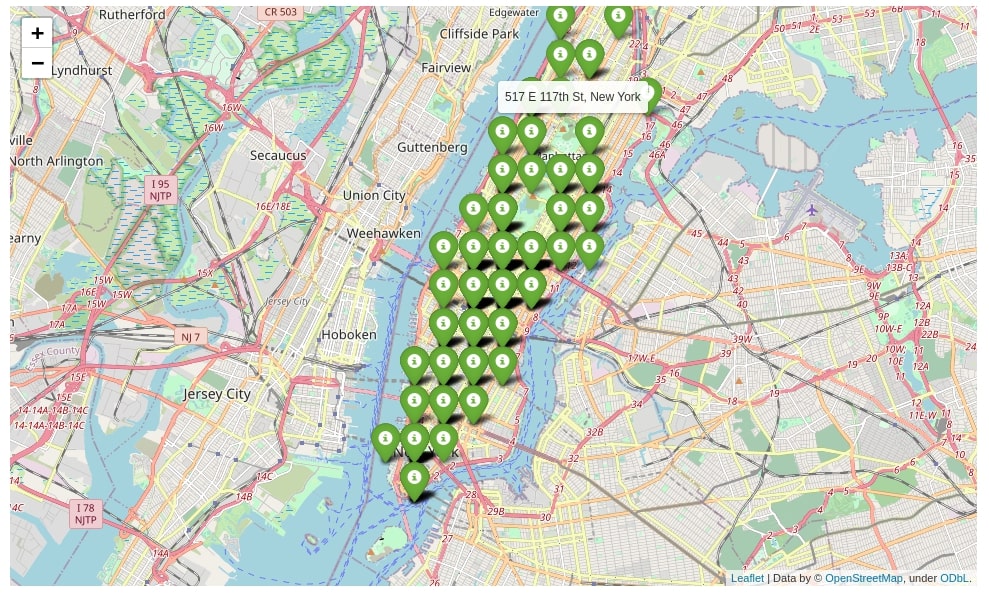 Below we are plotting markers on the state of Gujarat (India) where each marker represents districts of the state. We have then tried to link all districts by using PolyLine. PolyLine lets us display lines on the map. 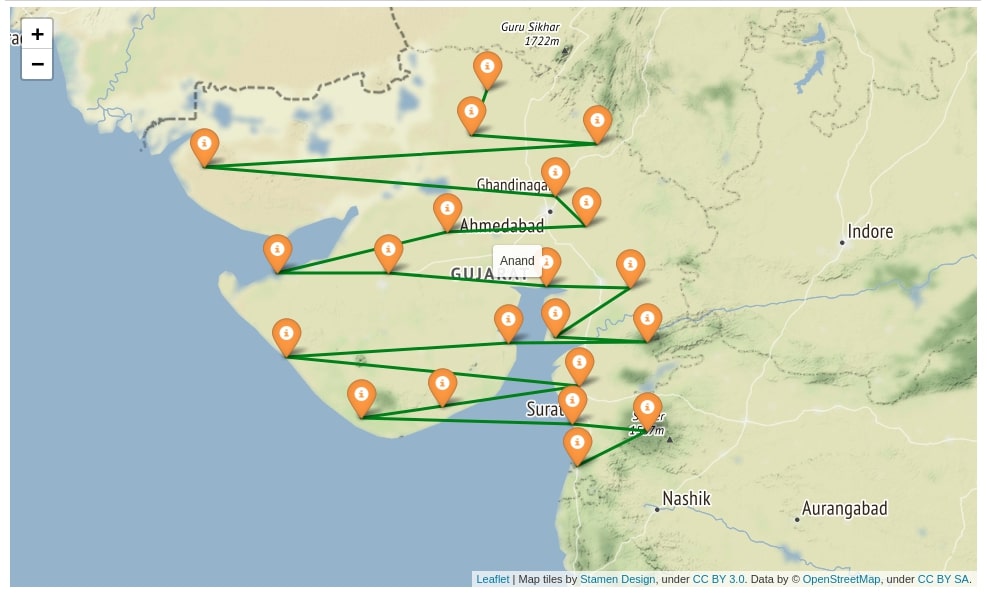 Below we are plotting markers on the state of Gujarat (India) where each marker represents districts of the state. We are then plotting polygons to identify a particular area by calling Polygon method of folium passing it list of locations. We are plotting 2 random polygons to display use of it. 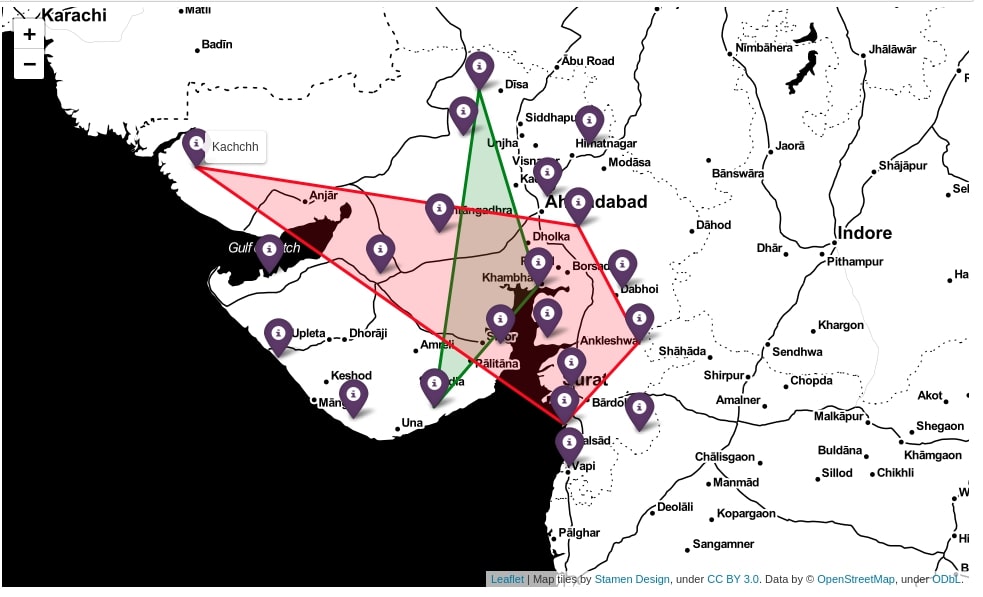 We need polygon (list of latitudes and longitudes) representing the region to plot choropleth maps with folium. Below we are downloading USA states geo JSON which has polygon for each states of US. We are then linking it to columns of Starbucks locations dataframe. The linking between polygon JSON and pandas dataframe happens based on one key column the same between them. We then pass another column to columns attribute of Choropleth() for which we need to create choropleth maps. 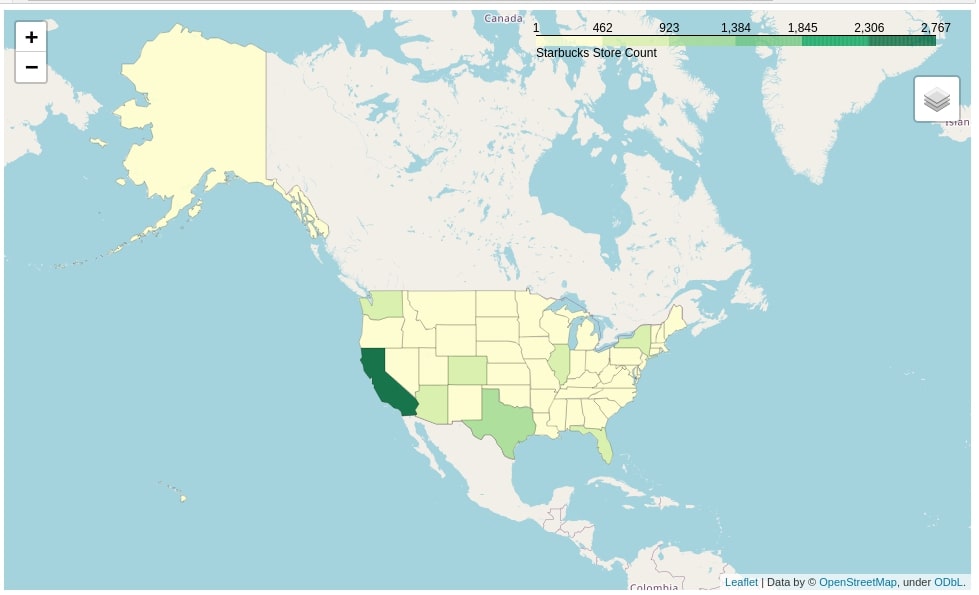 For this map, we need to download geo JSON for a world with polygon representing each country of the earth. We suggest that you download it from here. We noticed that feature key of JSON has a key named properties which has a dictionary with a key named sovereignt that maintains country name. The country named mentioned in JSON at feature.properties.sovereignt matches with a country named mentioned in Country or region column of happiness report dataframe. 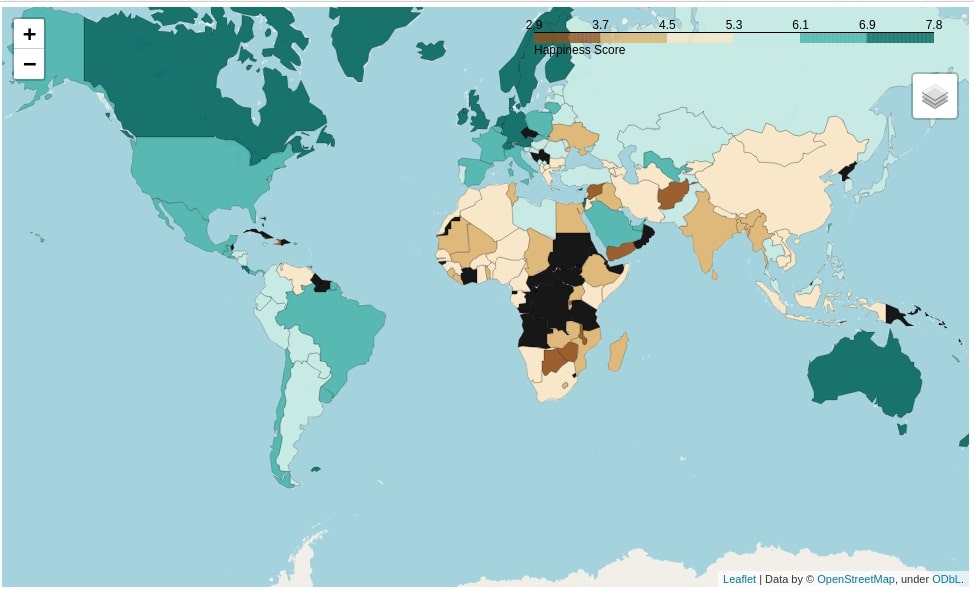 Below is another choropleth map linking GDP per capita column of happiness report dataframe with a world map. 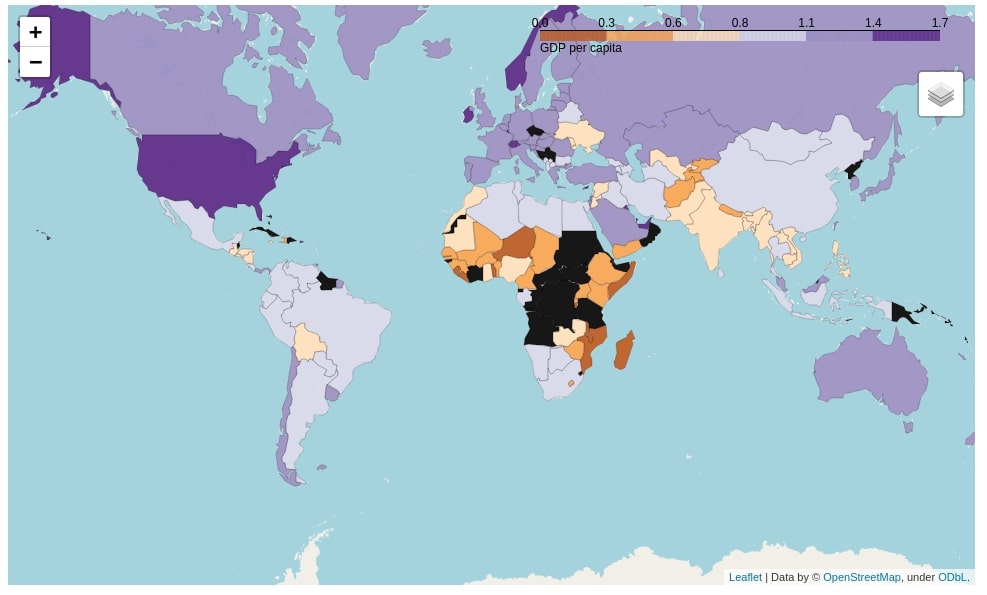 Below is another choropleth map linking Perceptions of corruption column of happiness report dataframe with a world map. 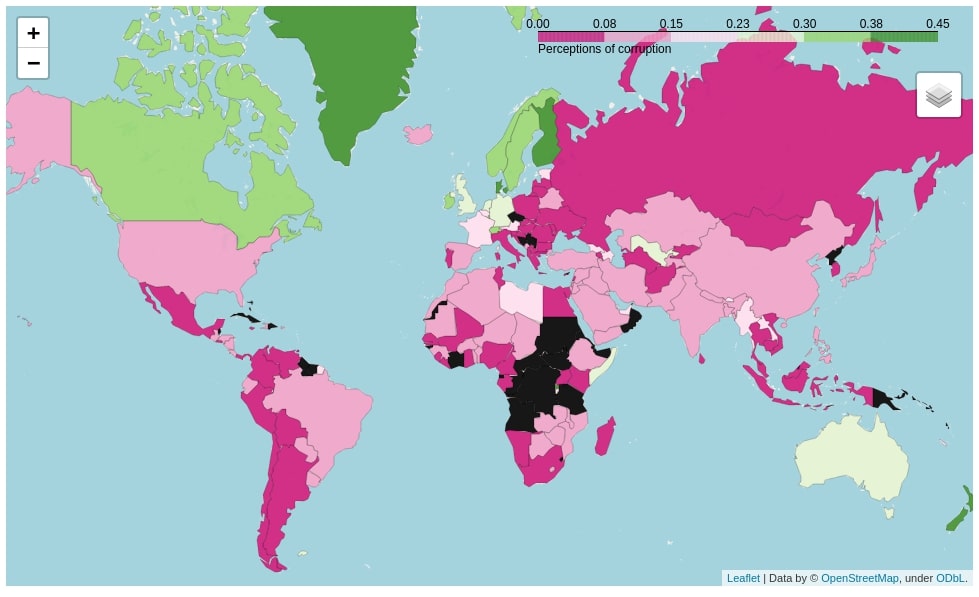 Below is another choropleth map linking Freedom to make life choices column of happiness report dataframe with a world map. 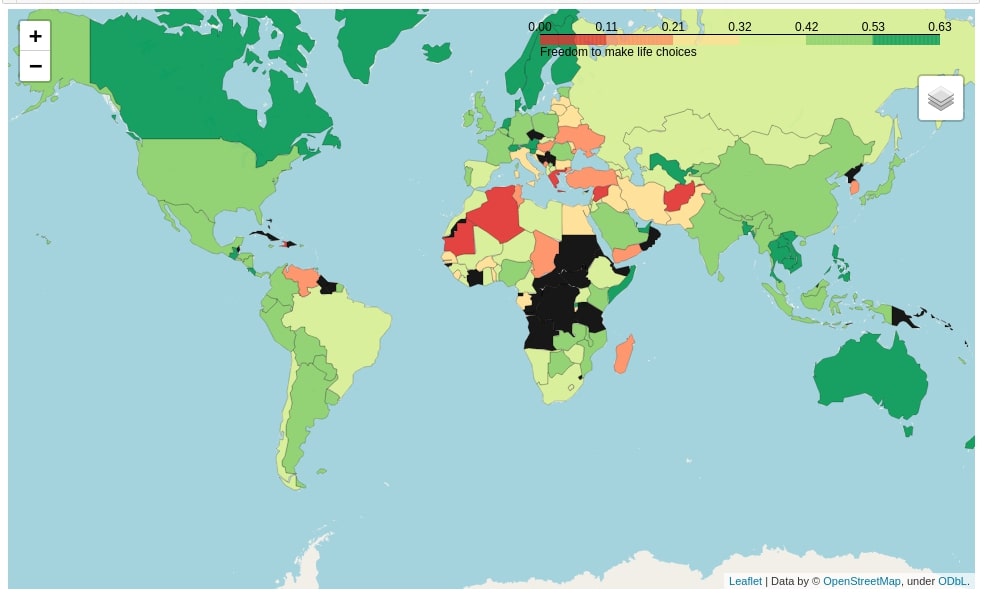 Below is another choropleth map linking Healthy life expectancy column of happiness report dataframe with a world map. 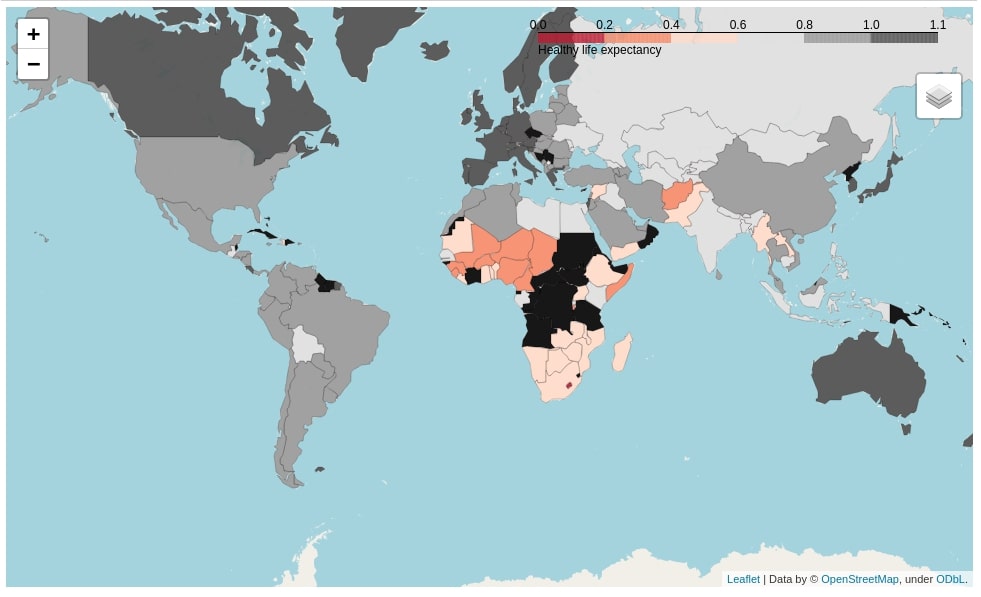 We can save folium plots as HTML files by calling save() method on map objects.

This ends our small tutorial on folium library usage. Please feel free to let us know your views in the comments.