The ipyleaflet is a python library for plotting maps. It's built on top of leaflet.js and ipywidgets. We have already covered a detailed tutorial about the usage of ipyleaflet as a separate tutorial. If you are interested in learning about various maps creation using ipyleaflet then we suggest you go through that tutorial.

We'll be explaining how to create choropleth maps using both constructors. Both methods require a little bit of data preparation which we'll explain with different examples. We'll be using various datasets for creating choropleth maps.

The first way of creating choropleth maps using ipyleaflet is using the Choropleth() constructor. We'll be explaining the usage of this constructor with various examples.

We'll also need geo JSON data for each country of the world which has information about each countries boundaries.

There is a discrepancy in the country name between geo JSON and pandas dataframe. We have hence included small code which loops through each geo JSON country name and checks whether there is mapping for it present in the proper_name_mapping dictionary then it takes that mapping to fill value of that country name. If the country is not available in the proper_name_mapping dictionary then it'll put 0 as a happiness score for that country. This small code is written so that if the country happiness score is available with a different name then it'll be mapped to the name which is present in the geo JSON dataset.

Below we have created our first choropleth map representing the happiness score for each country of the world. We have created Map() as usual way. We have then created a choropleth layer using the Choropleth() constructor. We have given geo JSON data loaded to the geo_data parameter and mapping dictionary created to the choro_data parameter. We also have provided colormap to use. We have provided which key to use to identify features which is the name key for each feature in the dictionary. This is the reason we had earlier moved name one level up when loading the geo JSON dataset as a python dictionary.

As each map and component of ipyleaflet is ipywidgets widget we can provide style information as a dictionary to the style parameter of Choropleth(). 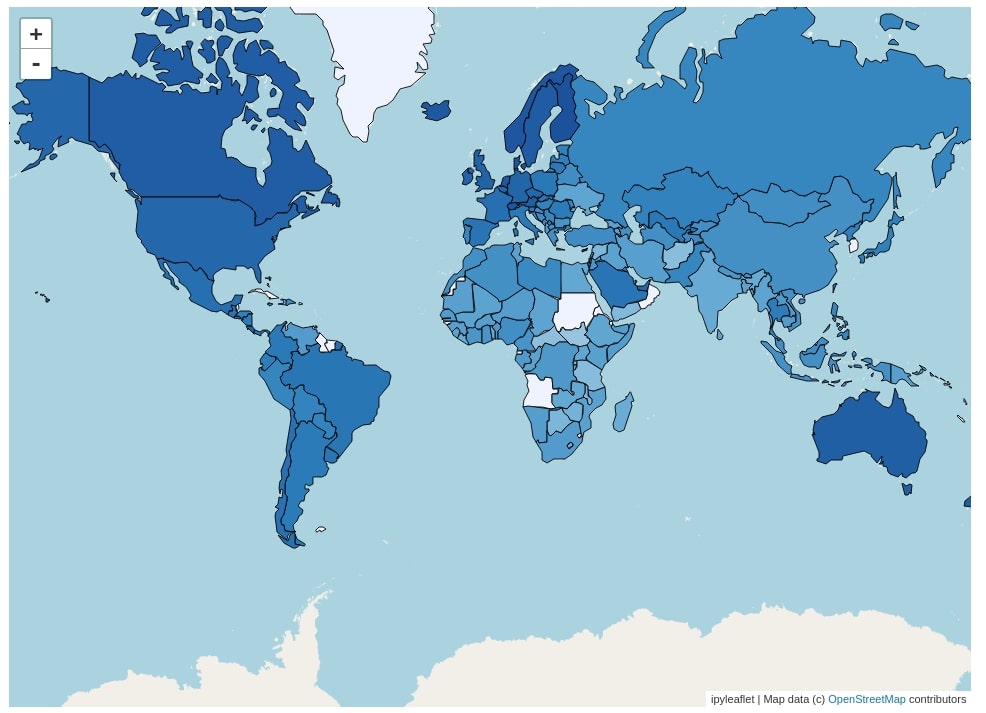 We have created mapping the same as last time and also corrected a few mappings due to discrepancy in country name across datasets. 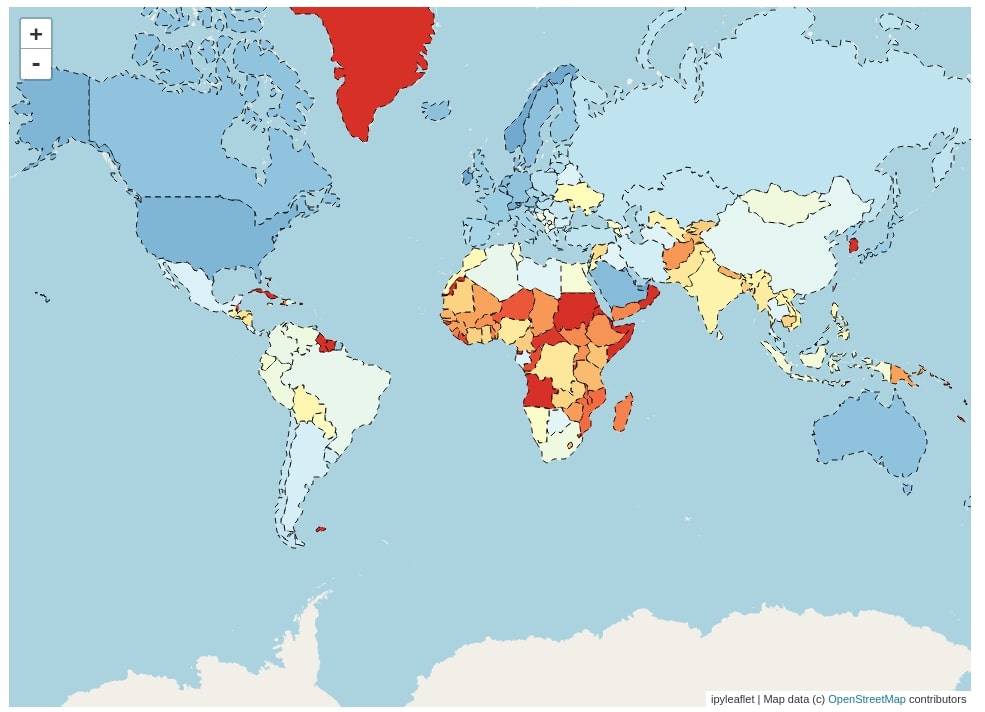 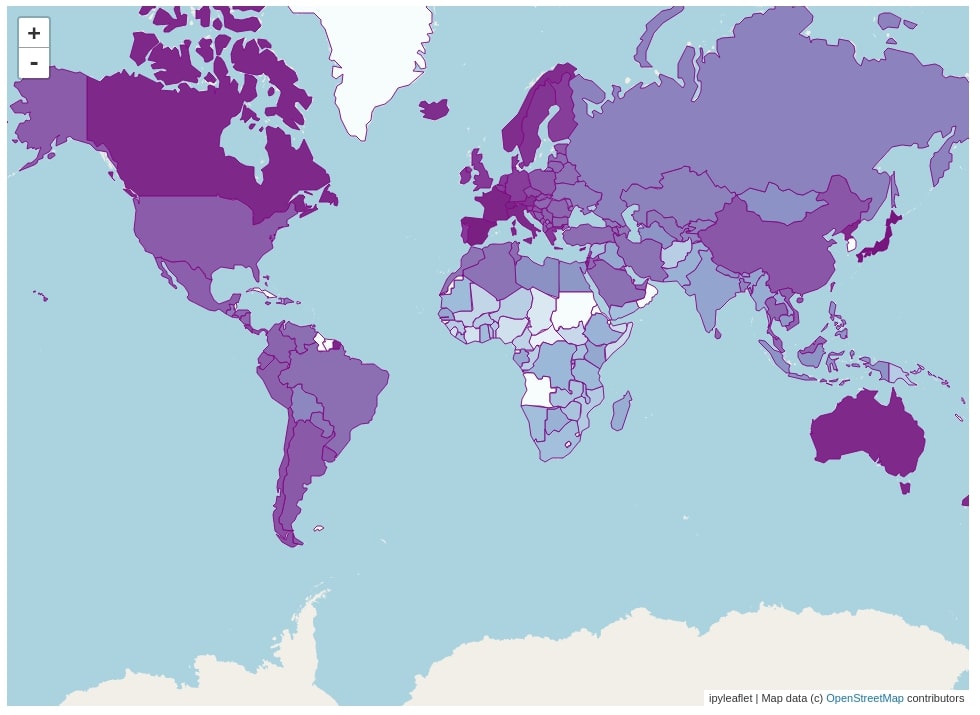 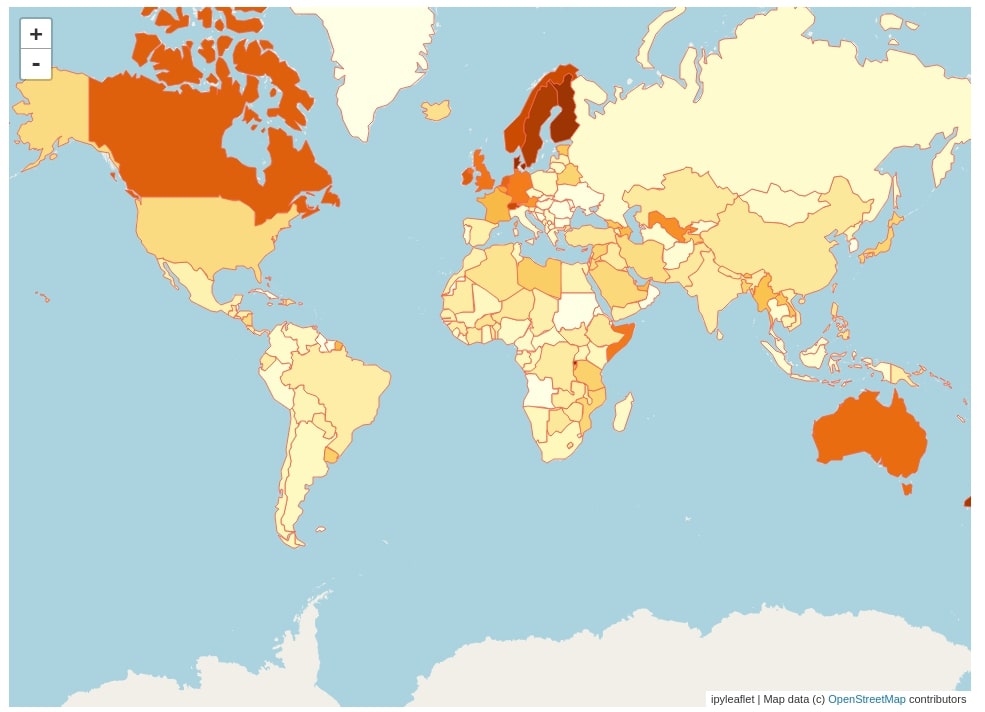 The fifth choropleth map that we'll create using ipyleaflet is the US states population choropleth map. The dataset which has information about each state population is available on kaggle.

We have loaded the dataset as a pandas dataframe.

Below we have created a choropleth map for the US state-wise population. It has the same steps as a previous choropleth map. We have loaded the geo JSON dataset which has boundary information about each US state. 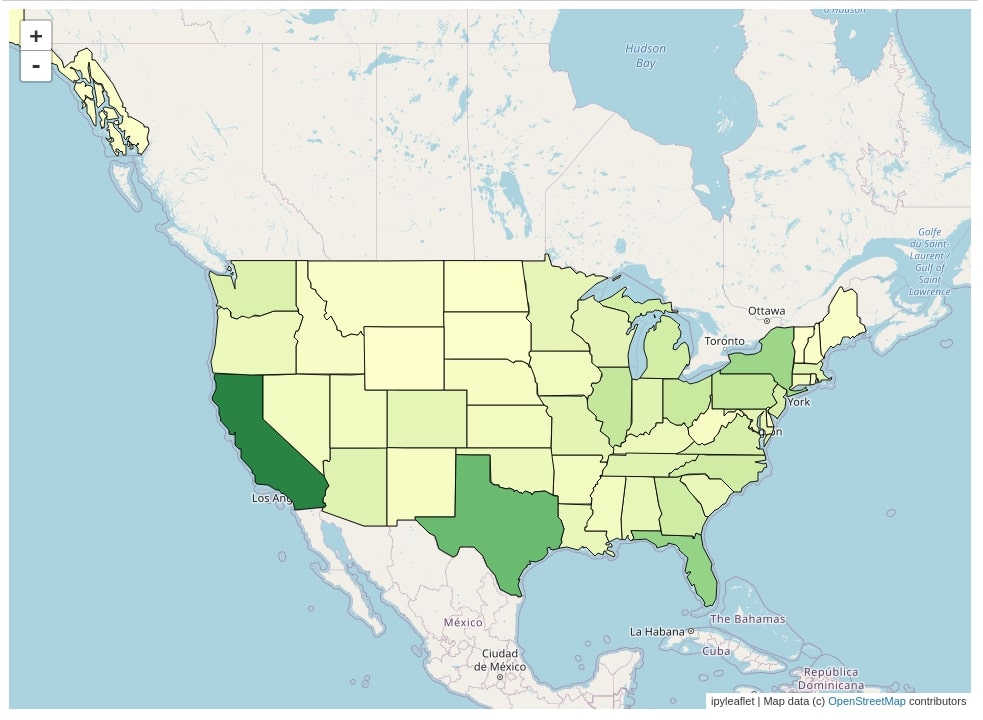 The sixth choropleth map that we have created using ipyleaflet is state-wise Starbucks store count for the US. The dataset which has information about Starbucks store locations is available from kaggle.

We have loaded the dataset as a pandas dataframe.

Below we have filtered the original dataset to keep only rows where the country is the US. We have then grouped the dataset based on the state name to get a count of stores per each state.

Below we have created a choropleth map with exactly the same steps as the previous example with the only difference that this time we have used different key in the Choropleth() constructor. The dataset has state name available as code and the geo JSON dataset also has state name available as code as a part of the id key of it. This will allow state code matching between mapping data and id key data of the geo JSON dataset. 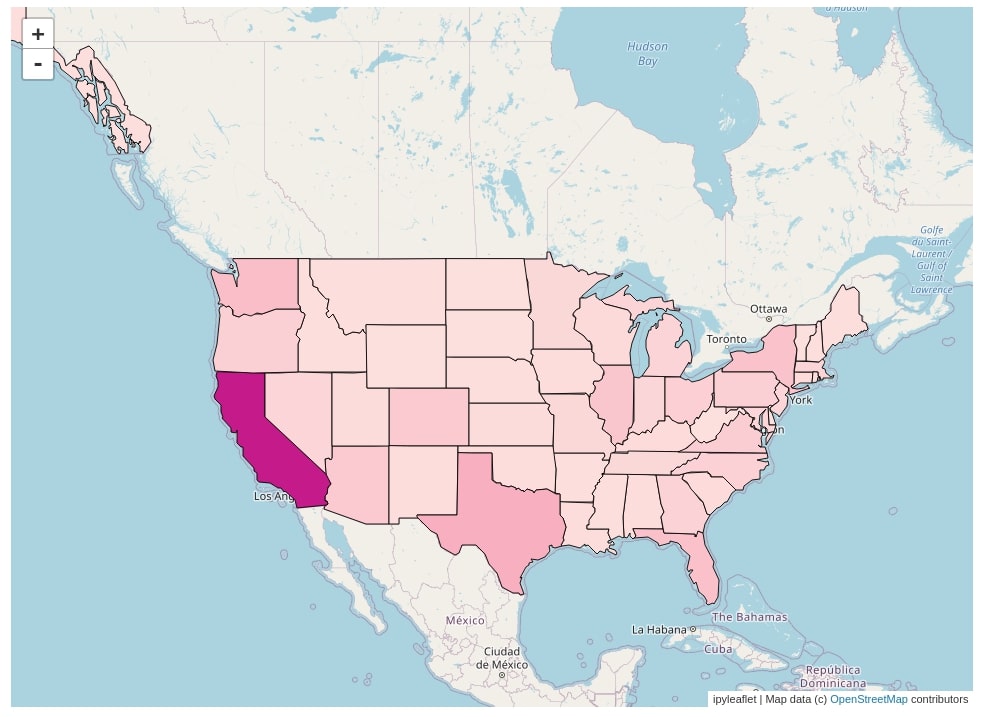 The second way of creating choropleth maps using ipyleaflet is using the GeoJSON() constructor. This step requires a little bit of modification to data than the previous step. We'll explain the usage of this way to construct choropleth maps with few examples.

The first choropleth map that we'll create using the GeoJSON() constructor is the happiness choropleth map for each country of the world. We'll start with loading world countries geo JSON data the same as earlier examples.

Below we have created our world happiness choropleth map using GeoJSON(). We have created a map object first. We have then created a geo json layer using the GeoJSON() constructor passing it geo json data and a callback function which will be used to style each country.

We have declared callback function named feature_color() which returns style information for each feature (country). It maps the normalized happiness score for each country to color available for that value in BuGn_04 colormap. We have also provided information about the hover style for each feature. 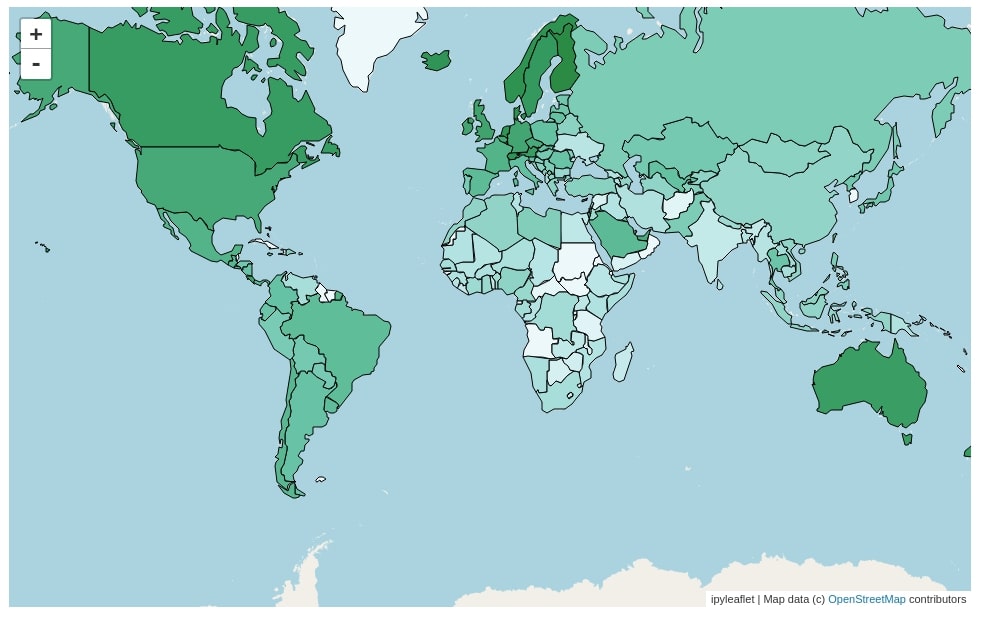 Below we have created another choropleth map using the GeoJSON() constructor but this time using Healthy life expectancy of pandas dataframe. The code is totally the same as the previous step with only a change in column name to use for the choropleth map. 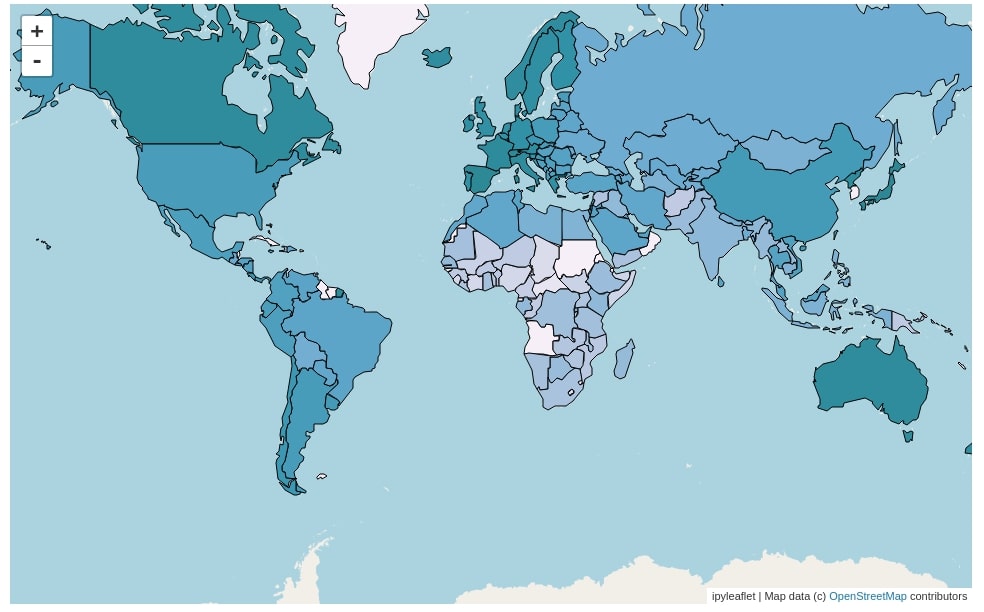 The third choropleth map that we have created using GeoJSON() is the US states population choropleth map. The steps to create a map is almost the same as the previous two examples with only changes in geo json and pandas dataframe. 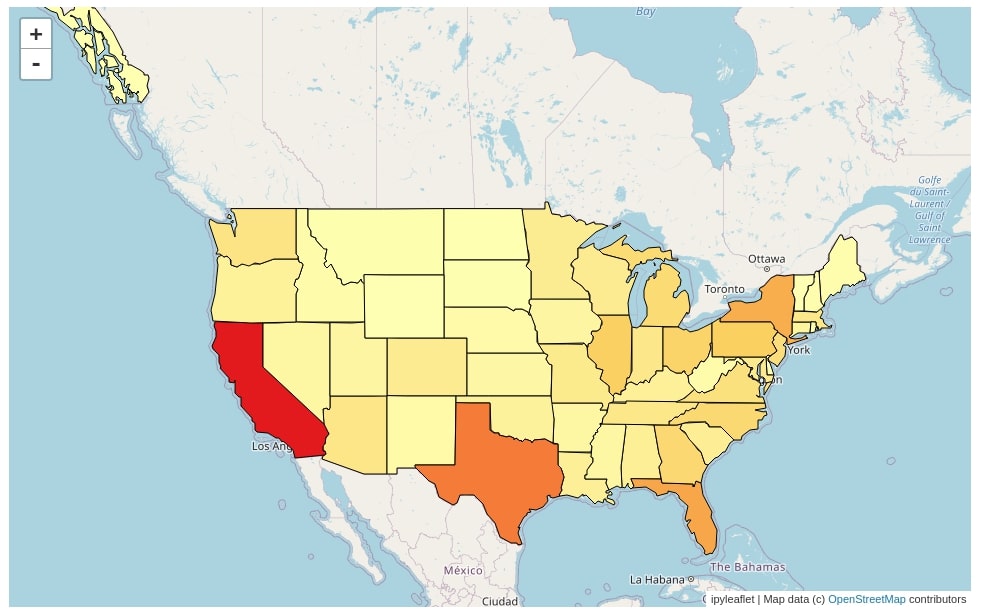 This ends our small tutorial explaining ways to create choropleth maps using ipyleaflet. Please feel free to let us know your views in the comments section.