Many data analysis tasks nowadays involve working with geo spatial data and plot it on maps to get useful insights. For this purpose, we need a trustworthy and reliable plotting library that can be used for plotting maps from a different perspective. Python has a list of libraries (geopandas, bokeh, holoviews, plotly, bqplot, etc) which provides functionalities to plot different types of maps like scatter maps, choropleth map, bubble map, etc. We have already covered tutorials on creating maps using geopandas, holoviews and bqplot.

In this tutorial, we are going to introduce one more python map plotting library named cartopy. Canopy is a map plotting library in python which is based on matplotlib for plotting. It uses PROJ.4, numpy and shapely for handling data conversions between cartographic projection and handling shape files. Cartopy can be very useful to generate a high-quality static map chart that has high publication quality. If you want a high publication chart for your research paper and looking for plotting library with various projections available then cartopy is for you.

As a part of this tutorial, we'll explore the API of cartopy in order to generate various maps. We'll be using various datasets available from kaggle for our map examples.

We'll start by loading necessary libraries for our plotting purpose.

The generation of maps using cartopy can be done by following below mentioned common steps:

Above mentioned steps are common steps when you want to generate world maps but it also provides other functionalities which can let you restrict map area to a particular region. We'll use the above-mentioned steps to plot a simple map.

Below we are plotting our first simple plot with projection PlateCarree. We have also added the COASTLINE feature so that we can see all continental borders. 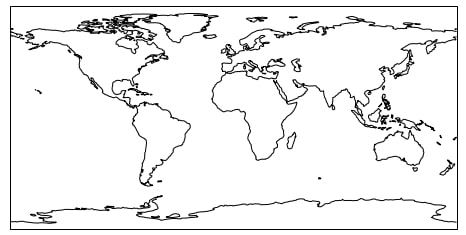 If you are facing issue when running cartopy code where your kernel crashes or you are getting error related to GEOS then we suggest that you follow solution mentioned on this link.

Below we are again trying the same PlateCarree projection which we had tried in the previous figure but we have also introduced natural earth look to the plot. We can add it by simply calling the stock_img() method on the axes object. We have also introduced a new way to add new coastline features to our plot. 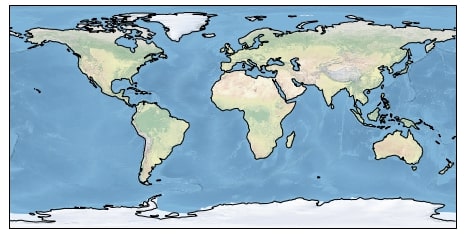 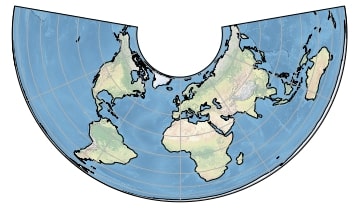 Below we have introduced another projection named Orthographic which has a shape of the globe. We also have passed its parameter central_latitude and central_longitude which centers glob location on that point which is the center of India. 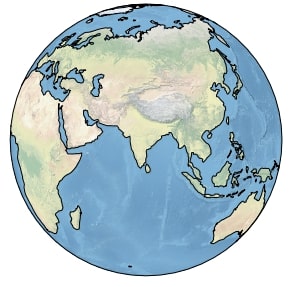 We are adding below feature to our map:

There are few more classes available from cartopy which lets us add our own designed features but we have not discussed them here as they are not part of the scope of this tutorial. 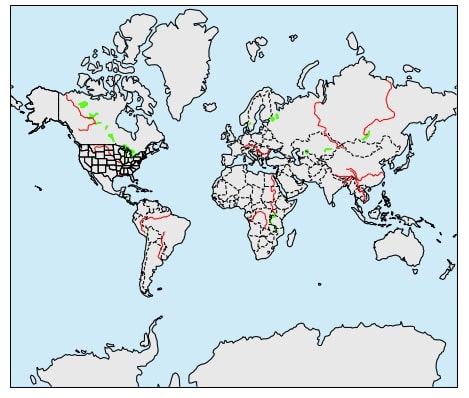 Below we are adding one more feature to cartopy map called nightshade feature. We need to create a datetime object with datetime data and need to pass it to Nightshade object so that it can create nightshade on a map at this time. It'll create a shade effect on a map covering countries where it'll be night during that time. 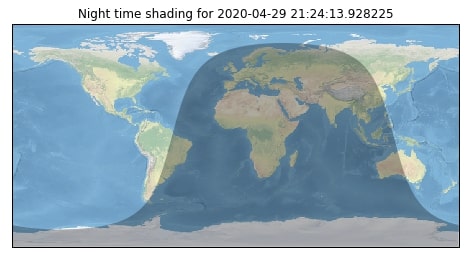 We have used the below set_extent() method passing it projection as PlateCarree so that it projects box from that projection. We have tried to cover Asia and Europe continents on a map. 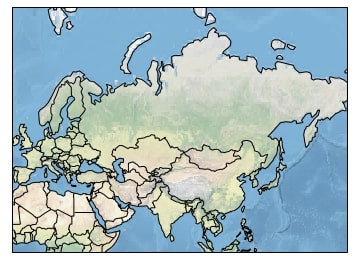 We have now explained how to create various maps using cartopy. We'll now explain how to add further more data on maps like plots, lines, etc below. For that, we'll be using the Starbucks store locations dataset and brazil flight dataset.

The first dataset that we'll load is Starbucks store locations dataset available from kaggle. We suggest that you download a dataset from kaggle to follow along.

We'll be filtering dataset removing entries from all other countries present other than the United States.

Below we are plotting scatter map of showing Starbucks locations on the whole Earth.

We have first created a map using a new projection named Robinson. We have then added scatter points on a map using commonly using plt.scatter() the method passing its longitude and latitude of locations. We have also passed it PlateCarree projection as a transform parameter value. We need to pass it so that it plots points on that projection first and then projects it on a map with Robinson projection. This is the convention that we'll be following in future maps as well. 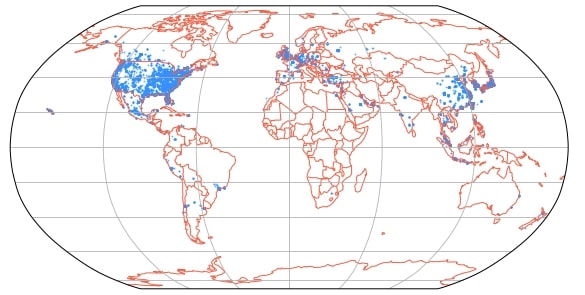 We can notice a high number of Starbucks locations in the whole US and Europe. There is also a sizable number of stores in Chine and Canada as well. All other locations of the world have very less or no Starbucks presence.

For creating a bubble map of Starbucks store count per US states, we need to prepare data by following the below-mentioned steps.

Our final dataset will have an entry for each state along with its latitude, longitude, and Starbucks store count which we'll use for plotting bubble map.

Once we are done with creating a dataset, we'll plot the bubble map exactly the same way as the previous map. We'll call plt.scatter() the method passing it latitude and longitude of each state of the US. We also have passed the size of the marker to be used for each step which is count of stores available in that state. This time we are also restricting graph by setting a limit on it using set_extent() so that it only displays US map. We also have added for states of the US. 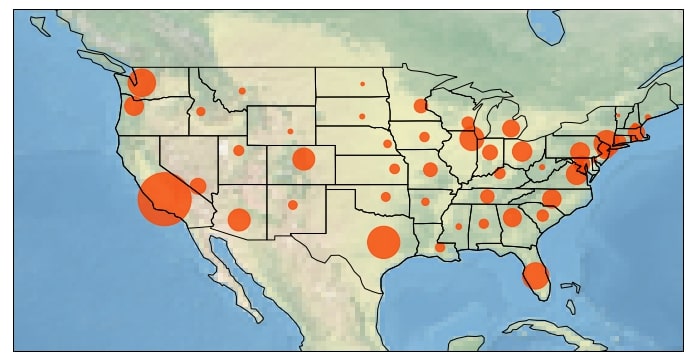 We can notice from the above chart that there is a very high presence of Starbucks in California, Washington, Texas, Florida, Illinois, and New York.

The second dataset that we'll be using is flight data for a number of flights from and to Brazil. The dataset is available at kaggle.

To plot a connection map depicting flights from Brazil to other countries, we need to first prepare the dataset by following a list of the below steps.

Our final dataset will have information about flight count from source to destination countries as well as geospatial data for each country.

Our last map is a connection map where we'll be displaying flight movement from Brazil to various countries of the earth using a line. We also show a thick line where there are more flights going on and a thin line where fewer flights are going.

We have used Mollweide projection this time for the creation of a world map. We are then looping through each flight entry taking the source and destination latitude, longitude to draw line between them using conventional plt.plot() method. We have used Geodetic projection for plotting lines so that it shows a curvy line instead of a straight line from source to destination. We are also plotting names of destination countries where flights are landing from Brazil to highlight them. 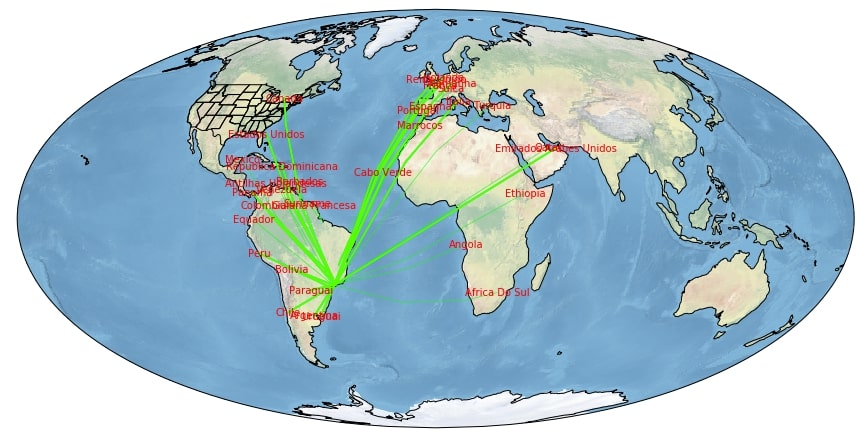 We can sizable number of flight traveling from Brazil to Southern American countries, US, Canada, and European countries. There are some travels to African countries as well but none traveling to Asia.

This ends our small tutorial on covering the basics of cartopy. Please feel free to let us know your views in the comments section.