The simplest way to create a map with ipyleaflet is by just creating an object of class Map(). It'll create a default world map with OpenStreetMap.Mapnik tile as a base map. We can set the center attribute with a tuple consisting of latitude and longitude telling it where to center the map. We can change different zoom levels by setting the zoom attribute with values between 1-15. The value of 1 will result in no zoom and the value of 15 will result in maximum zoom.

We can access basemap used for creating maps in ipyleaflet by calling basemap attribute on the map object. Below we can see that when we called basemap on the map object it shows us that the default basemap is OpenStreetMap.

The list of total basemaps available with ipyleaflet are available from this link:

Below we have explained a simple example where we have changed the default basemap from OpenStreetMap.Mapnik to OpenStreetMap.BlackAndWhite.

Below is another example where we have set basemap to OpenStreetMap.HOT.

We can change the base map even after the map is created. We can call the add_layer() method on the map object passing it basemap name as argument. The below example demonstrates how to do it by setting basemap to Esri.WorldStreetMap.

We'll now explain how to add various types of markers, icons, and pop-up messages to maps. We'll load Indian census data for various districts of states. The dataset is available from kaggle.

Below we have created another dataframe that will have information about districts of only one state (Gujarat) of India. We'll be using this dataset for plotting various districts’ locations on maps.

We can create a marker in ipyleaflet using the Marker() constructor available. We need to pass the location of the marker as a tuple of latitude and longitude and it'll create a marker on the chart on that location. We can also pass a string that will appear as a popup when the mouse is dragged over that popup using the title attribute of Marker(). By default, the marker can be dragged from one location to another, but as we don't want it to move we have set the draggable attribute to False.

We can add a marker to the map by creating markers and then calling the add_layer() method on the map passing it a marker.

Below we have created a map where there is a marker on all district locations of the state of India. As the ipyleaflet map is ipywidgets widget internally, we can apply various styles to it. Below we have changed the height of the map by setting the height attribute of the layout of the map. 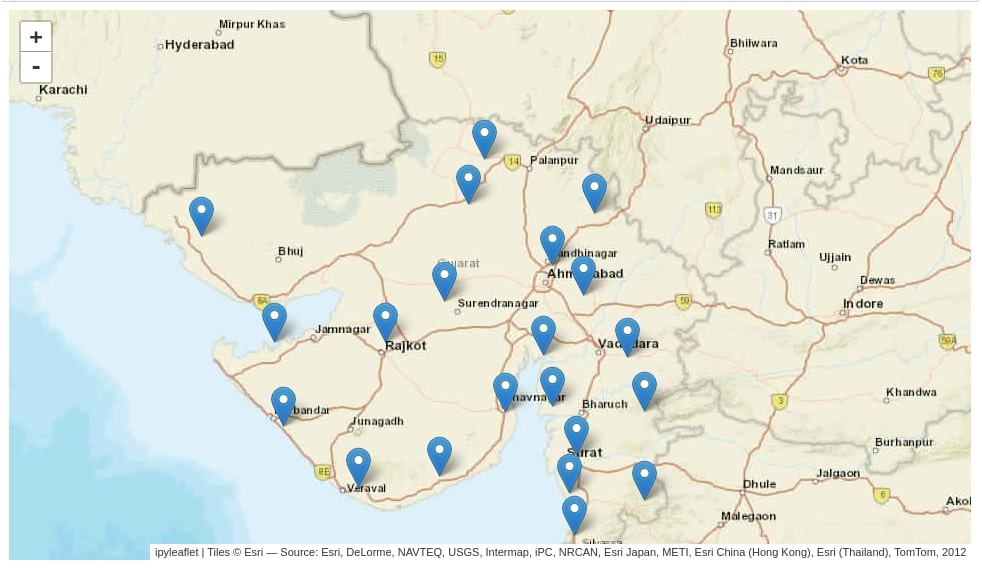 Below we have explained the usage of MarkerCluster where we are creating a cluster of all markers first and then adding them to the map. 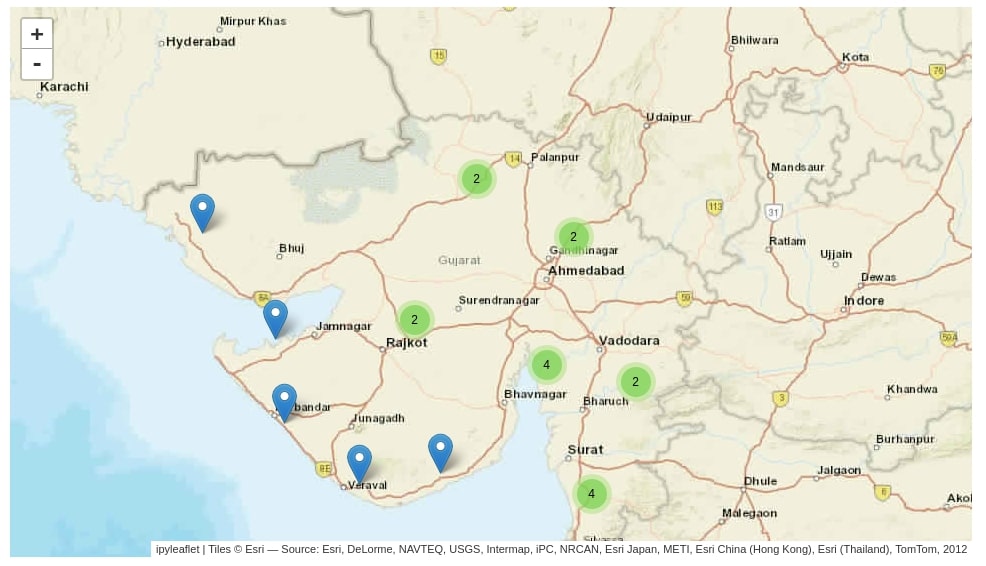 Once an icon is created then we need to set that icon object as the icon attribute of Marker() constructor. 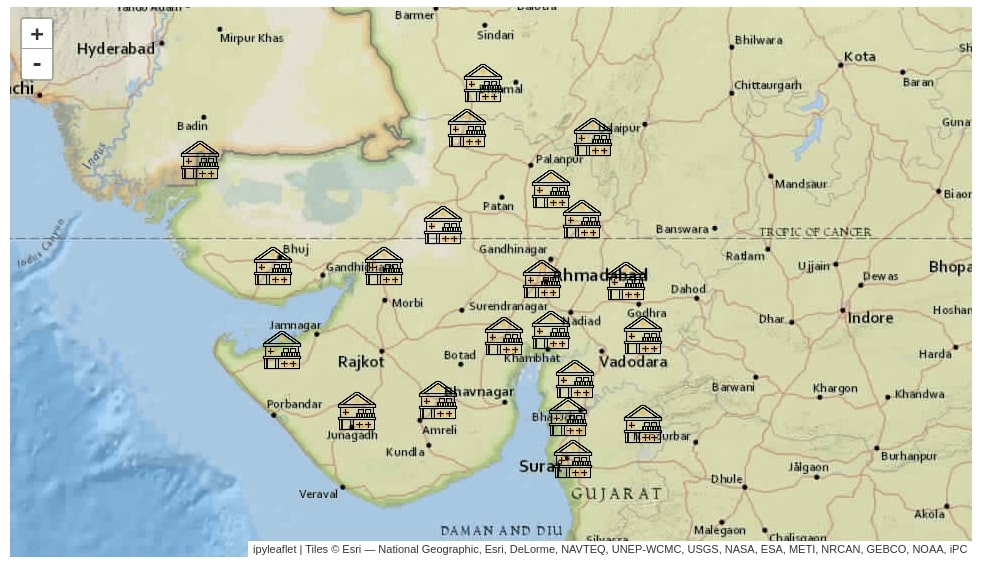 We need to create an object of AwesomeIcon available from ipyleaflet passing it name of fontawesome that we want to include in our map. We then need to set this icon object as an icon attribute of Marker(). 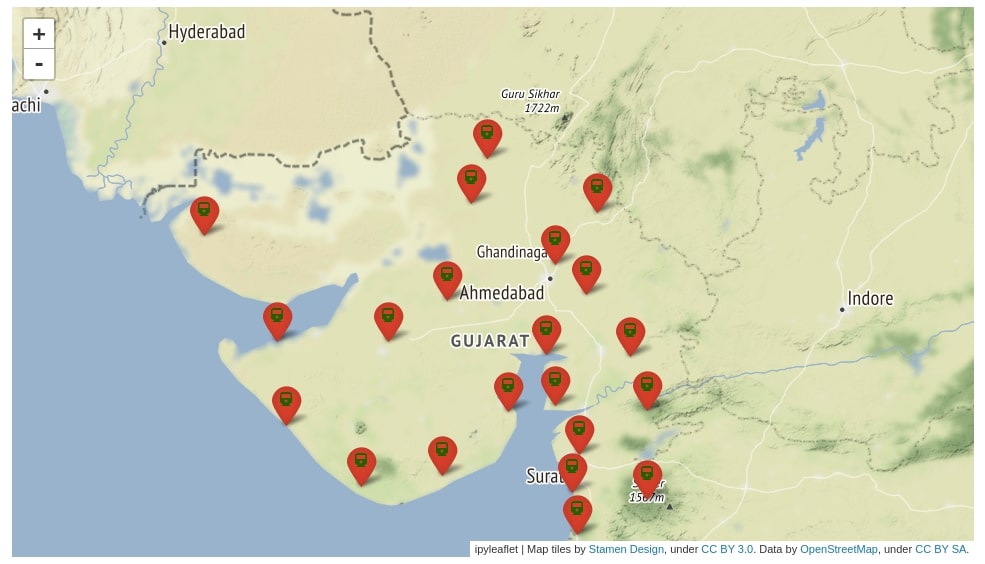 The ipyleaflet also allows us to add a popup to various locations on the map. We can create popup by using the Popup() constructor available from ipyleaflet.

Below we have created popup at various district locations of the state of India. We have also displayed district names and populations in the popup. 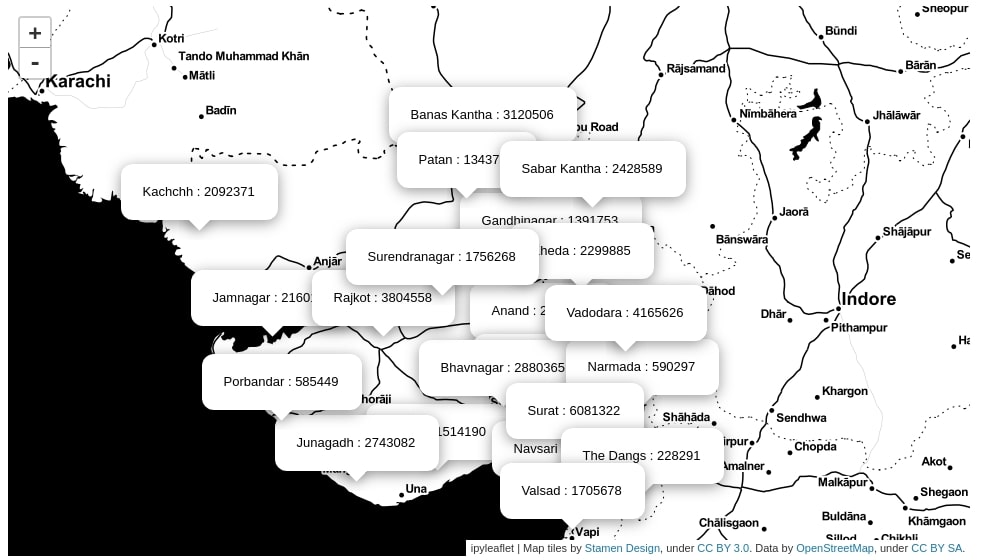 We can also add a popup on top of markers by creating an object of ipywidgets.HTML and then setting it as the popup attribute of the marker. We have explained the usage of the same in the below example. This popup will appear when someone clicks on a marker.

Please make a note that popup won't be visible on the tutorial page as all maps are shown as a static images. It'll be interactive when code is run in a jupyter notebook. 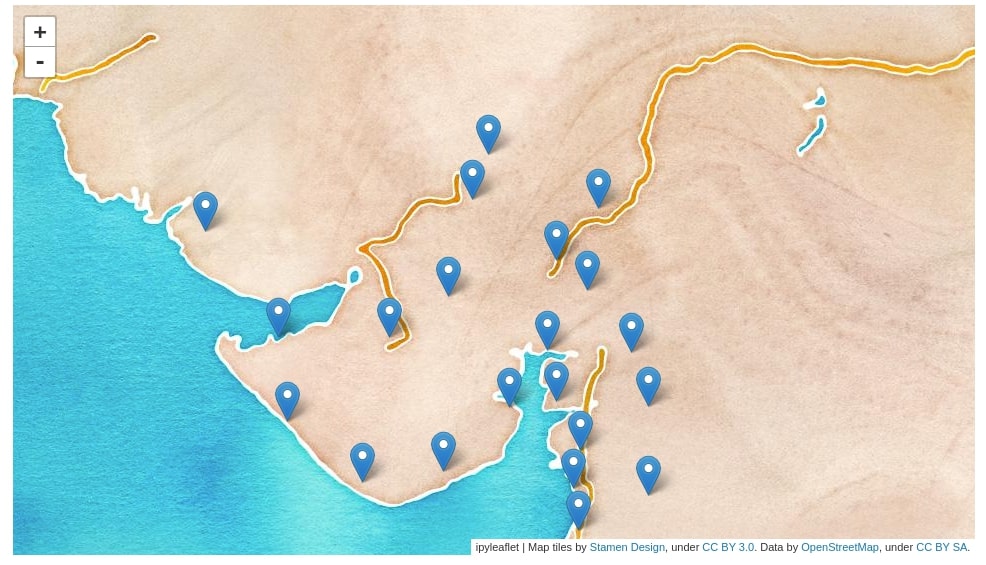 The lines can be added to the ipyleaflet map using the Polyline constructor of ipyleaflet. Below we have drawn a line between the first three districts of the Indian state dataframe.

We need to pass a list of a tuple of latitude and longitude to the locations attribute of Polyline(). We then need to add this polyline object map using the add_layer() method map passing it polyline object. We can also set attributes like the color of the line, the width of the line , etc.

Please make a note that the locations attribute expects location details as python list object and will result in an error if numpy array or any other object type is passed. 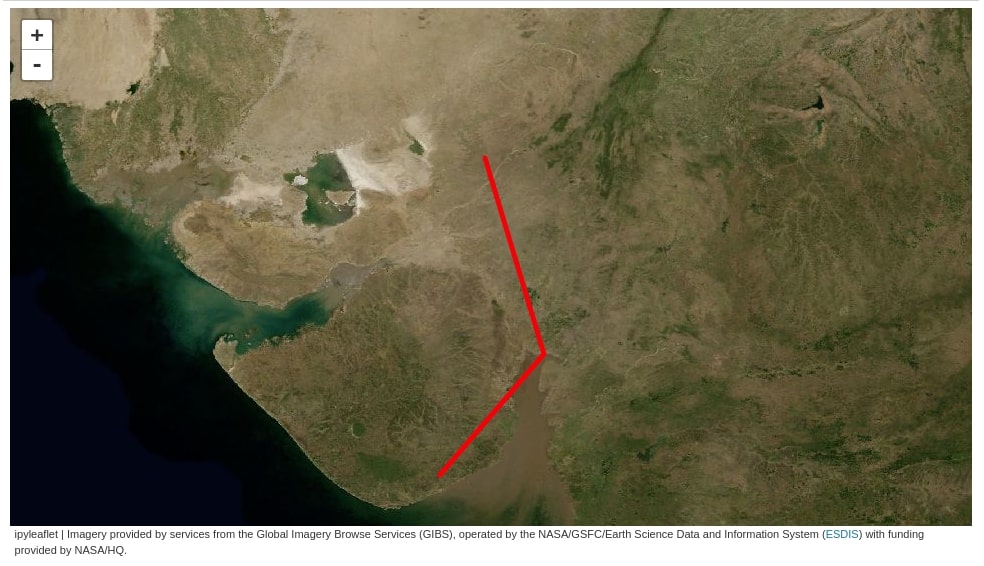 Below we have explained another example to show usage of Polyline(). This time we have added two polylines to the map. One polyline consist of the first three district locations of the state and the second polyline consists of the last three district locations of the state. We have also changed line color and width this time from default. We can also fill the area covered by polyline by setting the fill attribute of the constructor to True. It'll fill the area created by connecting endpoints of the polyline. 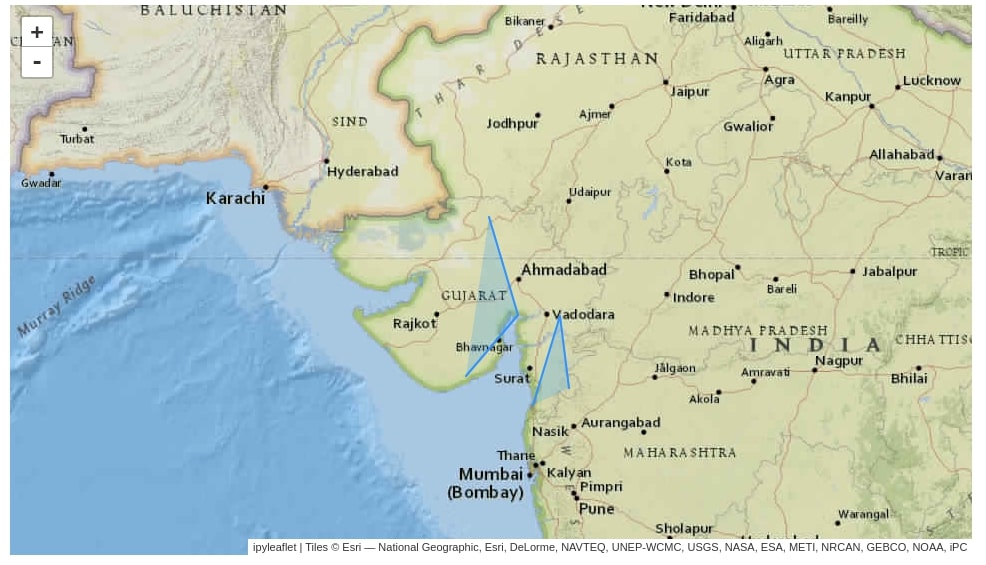 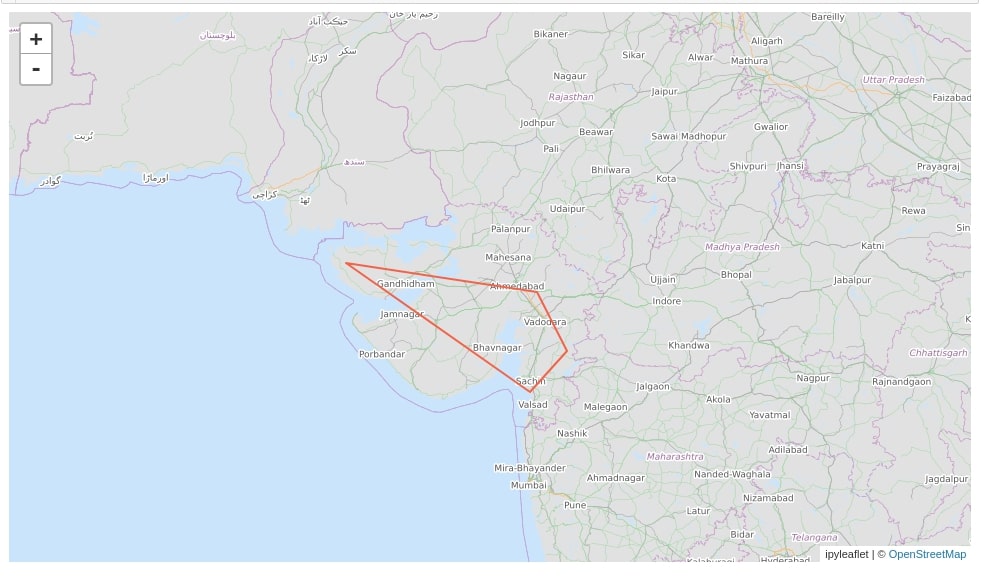 Below is another example demonstrating the usage of Polygon(). This time we have added two polygons to the chart as well as modified a few polygon attributes like color, line width, opacity, etc. 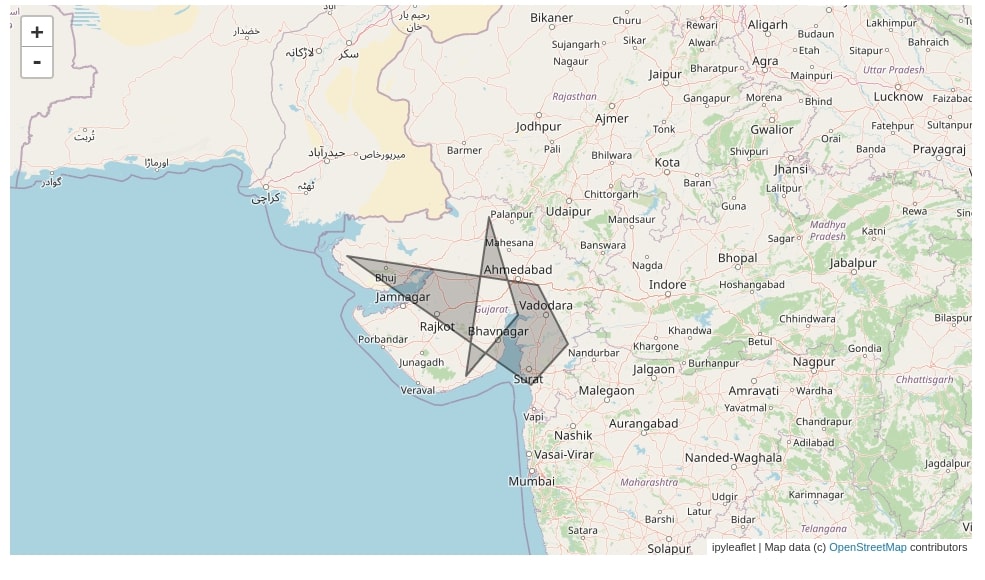 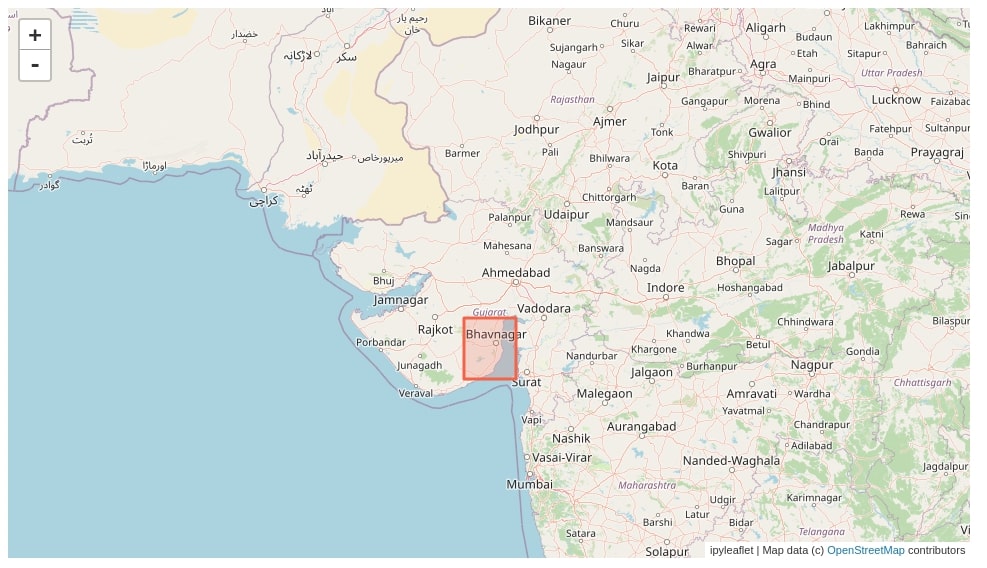 The ipyleaflet lets us add a circle of different sizes on maps as well. We can create a circle by calling Circle() constructor passing it a location where the circle needs to be created. We can also modify circle size by setting the radius attribute of Circle(). 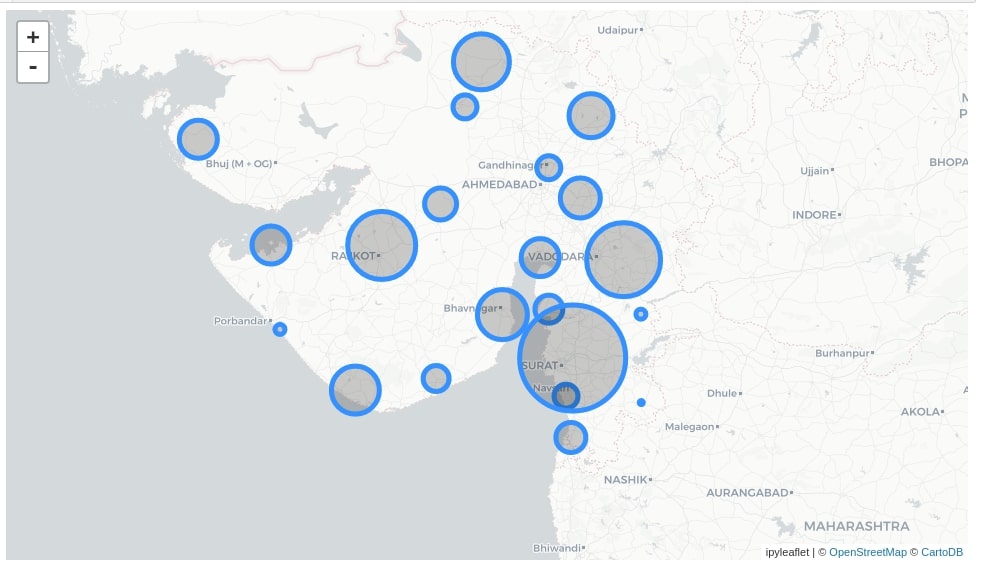 The ipyleaflet provides us unique functionality which lets us create a line between locations of map-like an ant is moving. It can be very useful to show the movement of any kind of resource from one location to another. Its commonly referred to as the ant path and can be created using the AntPath() constructor.

We need to pass it a list of locations as a tuple of latitude and longitude. It'll then create an ant path between that location with a path starting from the first location. We can also change the path of ants movement from the last point to the first by setting the reverse attribute to True.

Please make a note that the ant movement will not be visible on the tutorial page but it'll be visible when code is run in the jupyter notebook. 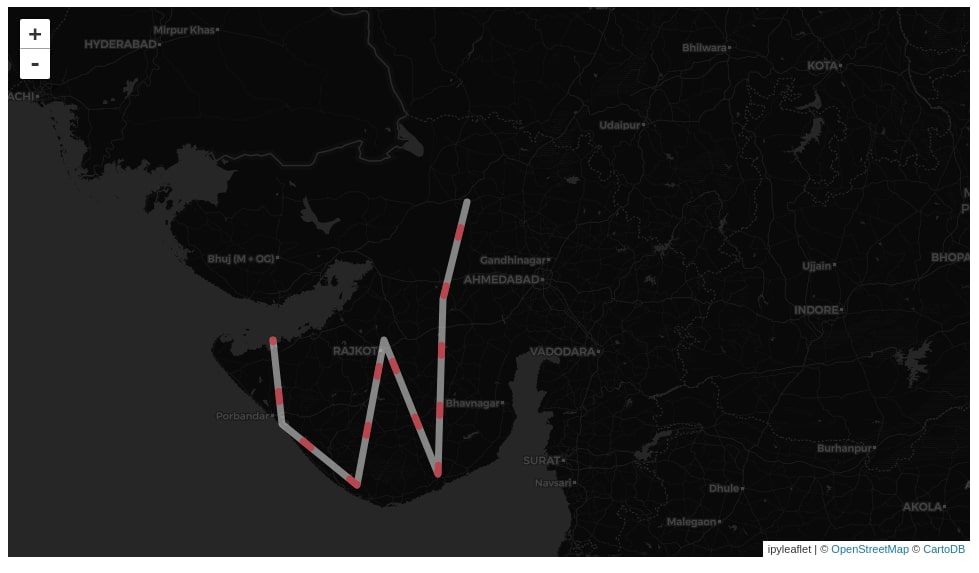 Below we have created another example of usage of AntPath() where we have created polygon of movement. We have also modified various attributes like path width, color, movement speed, etc. 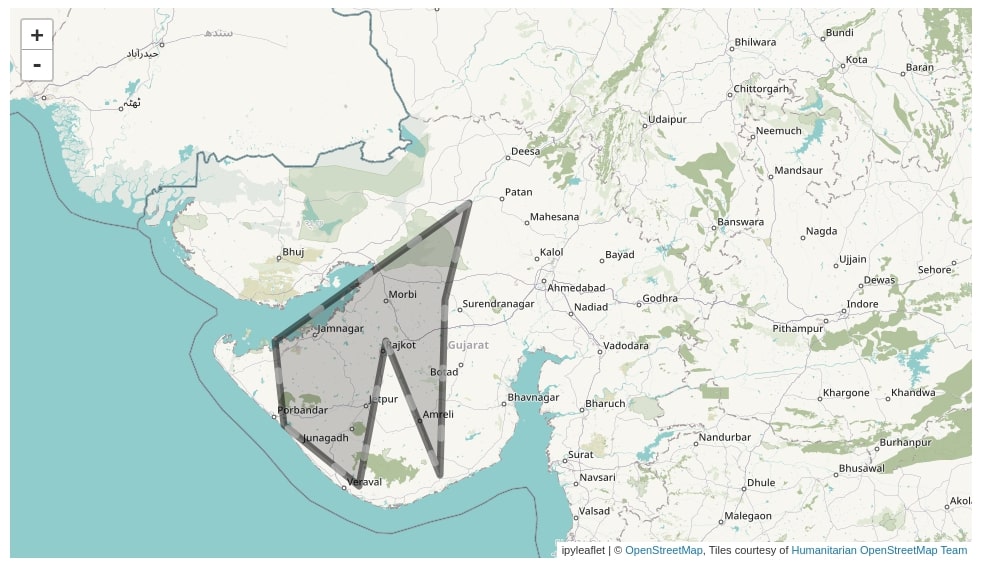 We'll now explain another example where we'll plot CircleMarker() on a chart depicting different locations of new york where there is a Starbucks store. We'll be using the Starbucks store locations dataset available from kaggle for this.

Below we have created a circle on all locations in new york where there is a Starbucks store. We have created the MarkerCluster() of all circles in order to prevent the map from getting crowded. We can see the MarkerCluster() has created clusters of circles where the stores are very near to each other. We can click on that cluster and it'll zoom and expand circles. We have also used popup which will display the store name and country when clicked on the circle. 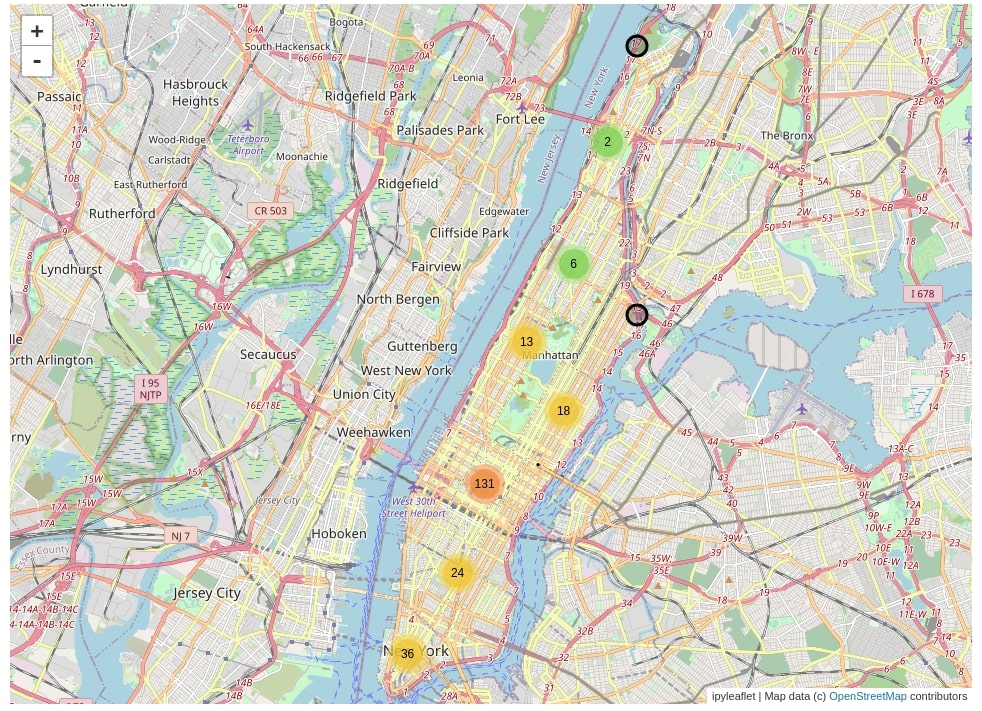 This ends our small tutorials explained the API of ipyleaflet to create maps. Please feel free to let us know your views in the comments section.