Python library geopandas provides a way to plot geographic spatial data on maps. Geopandas makes use of matplotlib for plotting purposes. All maps generated by geopandas is static. A Scatter plot made with geopandas does not give insights about points if a different size is used for points. We need interactive plots in this kind of situation to look into detail.

If you are a Python developer who has experience plotting maps with geopandas and wants to use the same API for creating interactive maps without learning many new things then this tutorial is for you. Also if you are starting out plotting maps with geopandas then we recommend that you follow this tutorial as it'll guide you about generative interactive graphs from the beginning.

We suggest that you go through our tutorial on plotting maps with geopandas before starting this as it'll help you understand things quicker.

We'll start by just plotting the world dataframe which we loaded above to see results. We can simply call plot() on GeoDataFrame and it'll plot world countries on a map. By default, it'll just print all countries with their borders.

Dataset also holds information about GDP per capita, social support, life expectancy, generosity, and corruption. We'll be merging this dataframe with geopandas world GeoDataFrame which we loaded above to combine data and then use combined data for plotting.

Below we are plotting our first choropleth map by simply calling the plot() method on geopandas GeoDataFrame by passing a column name as the first parameter to use for the map. We can pass other arguments like figsize, edgecolor, edgesize, etc for map. As it is a static matplotlib plot, we can call other matplotlib methods like title(), xlabel(), ylabel(), etc will work on it. 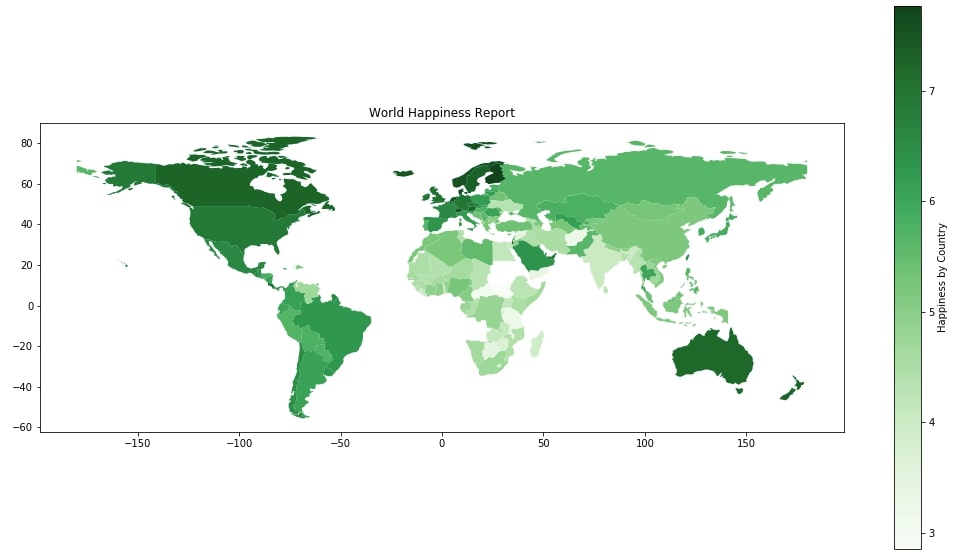 Below we are plotting a simple map plot first and then using a scatter plot available in matplotlib to plot all Starbucks locations on it. Please make a note that we have longitude and latitude data for each store available in the dataset which we are utilizing in scatter plot. 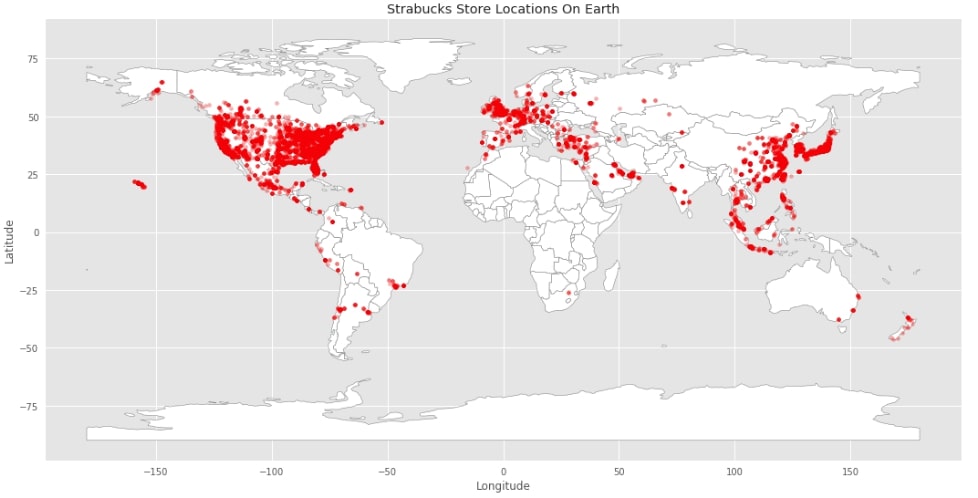 We'll now start converting above static maps to interactive maps using hvplot. We just need to import hvplot's pandas module to start. We then just need to call hvplot() method instead of plot() method on geodatagrame and it'll use holoviews to generate map plots.

We have below generated simple happiness map which can be generated by just calling hvplot() method passing is column Score to generate an interactive map. We can hover over it to see a score for each country.

We can pass other attributes to make changes to graphs like height, width, colormap, title and changing color when hovered over any country.

Please make a note that entries where NaNs are present are represented with grey color.. 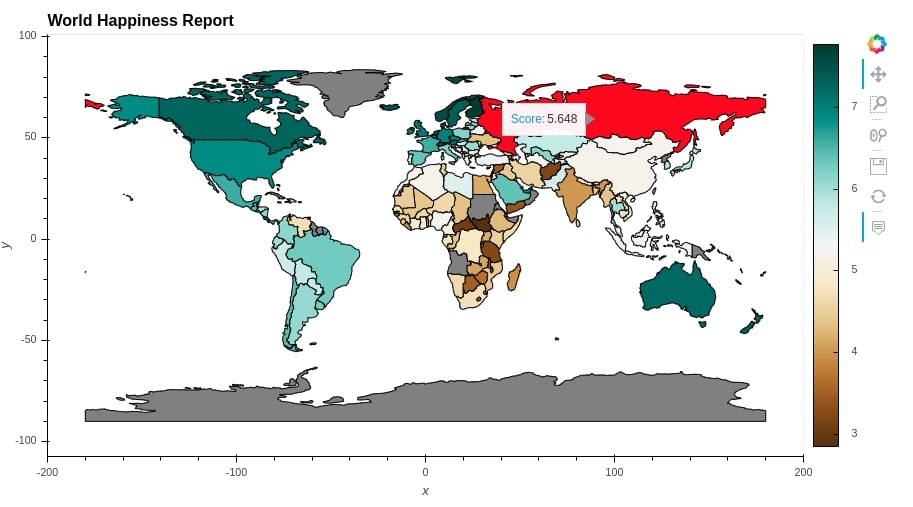 Below we have introduced a few more attributes like hover_fill_color, line_width, etc. 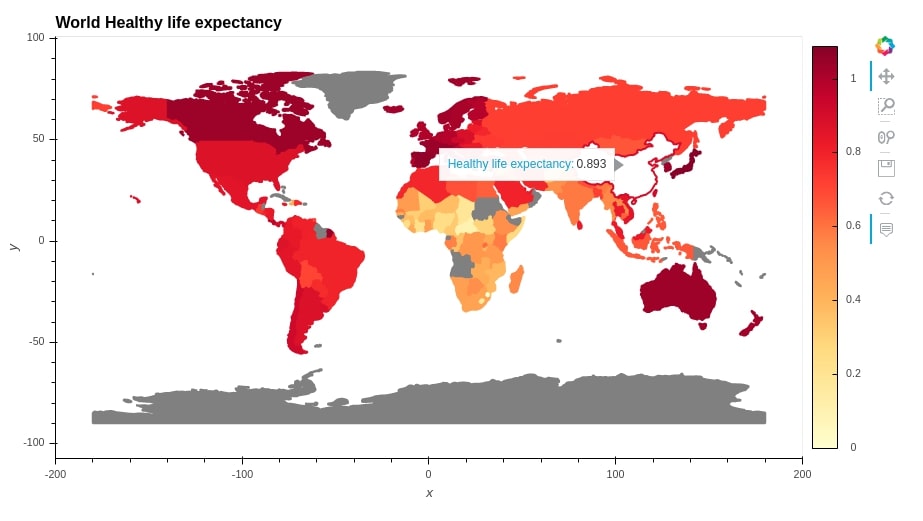 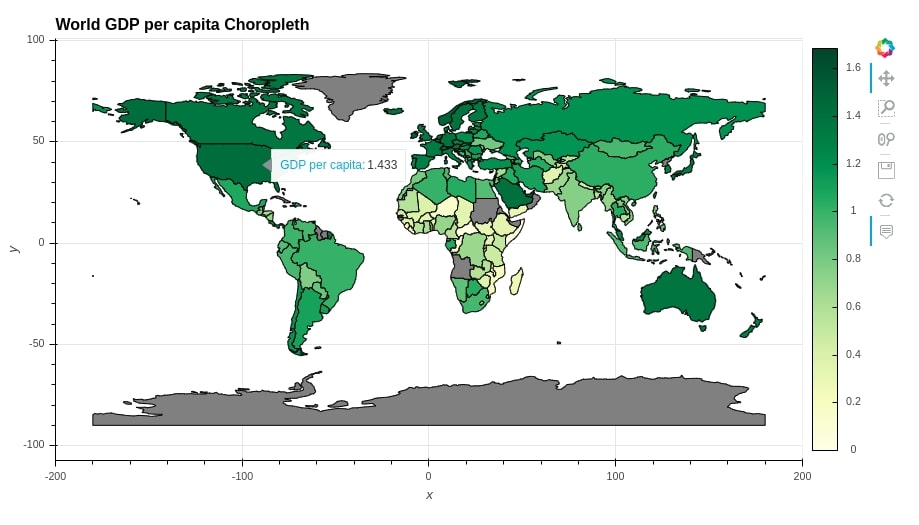 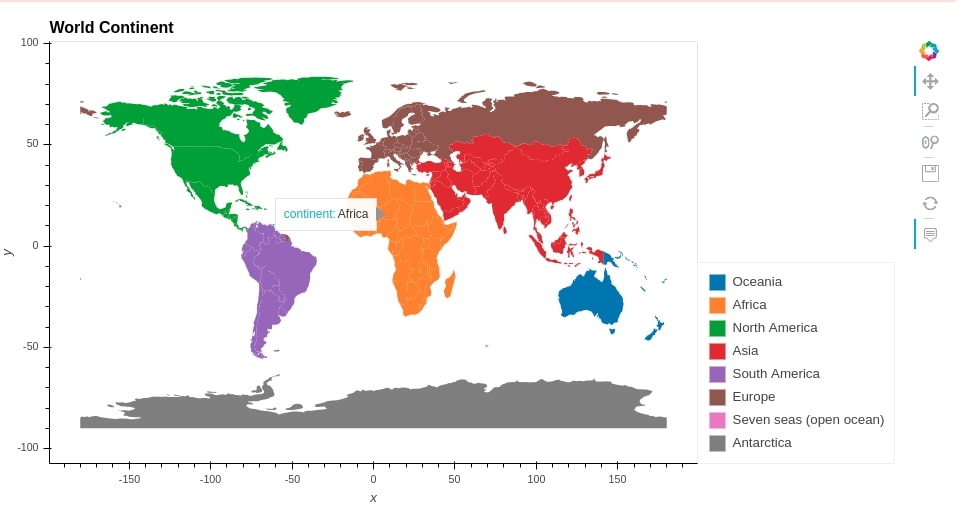 We can generate more complicated graphs by merging more than one graph. Holoviews provides 2 operations to merge graphs.

Below we are creating a scatter map by overlaying scatter plot on a map using * operation.

Below we are creating another scatter map where we are overlaying city-wise store counts scatter plot on a map of US. We can clearly see a big bubble for New York indicating a very high number of stores there. 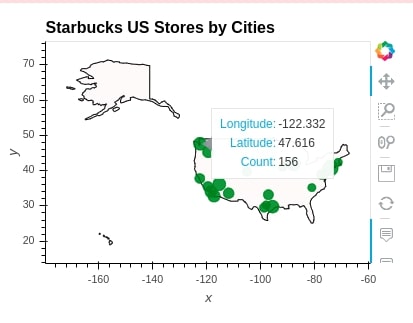 Below we are merging 3 choropleth using + operations. 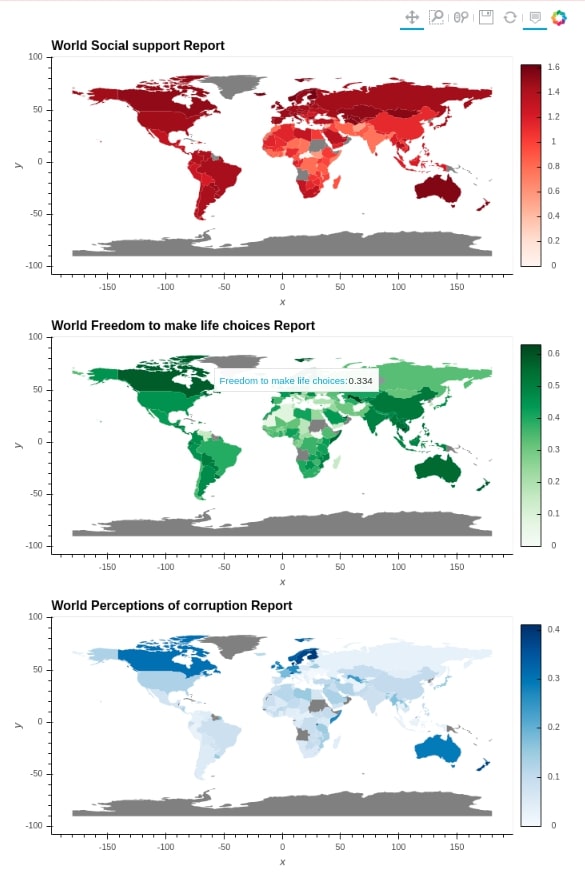 Below we have given another example where we are making use of * and + operations both to create a figure of Starbucks stores location scatter map and world happiness choropleth. 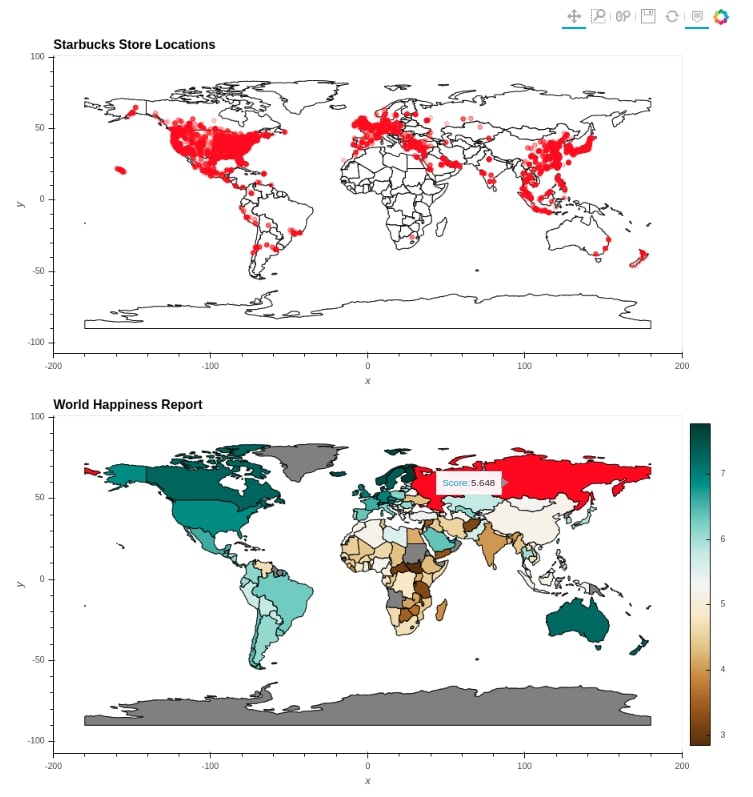 This ends our small tutorial on creating interactive maps using geopandas. Please feel free to let us know your views.