hvplot - Interactive Charts from Pandas DataFrame with One Line Of Code¶

Pandas is a famous python library that provides easy to use interface to maintain tabular data with its efficient data structure dataframe. It is the most preferred python library when working with tabular datasets. Data scientists and researchers worldwide prefer pandas to this date.

But what if you want your charts to be interactive?

What if you want to use the same interface of pandas for plotting which you are used to but want interactive graphs instead of static?

If the answer to any of the questions is yes then this tutorial is for you. Python has a library named hvplot that let us create interactive charts from pandas dataframe. It has same API as that of pandas plotting API.

What Can You Learn From This Article?¶

As a part of this tutorial, we have explained how to create interactive charts from pandas dataframe using Python library "hvplot". Tutorial covers many different chart types like scatter charts, bar charts, line charts, histograms, etc. Tutorial also covers how to modify chart properties (axes labels, title, etc) to improve look and feel of it.

Hvplot is built on top of another famous python data visualization library named "holoviews". Please feel free to check below link if you are interested in holoviews.

Below, we have imported "hvplot" and printed the version that we have used in our tutorial.

Please make a note that holoviews library itself is depended on bokeh for plotting. You'll need to have holoviews, hvplot and bokeh installed to continue with this tutorial.

We'll start loading the wine dataset available in scikit-learn. It has 13 features and a target variable with 3 different classes of wine. We'll keep the total dataset into pandas dataframe so that it becomes easily available for plotting and manipulation.

The second dataset that we'll use in our tutorial is apple OHLC dataset. We have downloaded dataset from yahoo finance as CSV file and loaded it in memory as pandas dataframe. 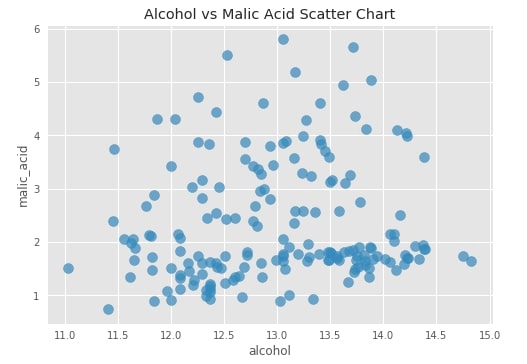 We can see that the above-generated graph is static and does not let us interact with individual points to look at values. We'll now try to convert this graph to an interactive graph and introduce a few other interactive graphs as well for the exploration of hvplot API.

It's quite simple to convert static pandas plots to interactive. We just need to import pandas module of hvplot which will provide a wrapper around the existing pandas module and expose hvplot API which we'll be exploring further for plotting purpose.

After importing pandas module of hvplot, we need to call hvplot() method on pandas dataframe to generate interactive graphs. Please make a note that we have called the method hvplot() with almost the same parameter values as above one.

Please make a note that hvplot use holoviews for plotting which is based on bokeh hence some of the parameters based on matplotlib won't work with hvplot() method. We'll need to use bokeh parameters for a purpose like a plot figure size and few other things. But the majority of parameter names are almost the same as matplotlib and almost perform the same operations on the graph which we noticed above.

We'll now explore furthermore graphs for explanation purposes. We have grouped wine dataframe by wine class and then taken mean for each column per wine category. We'll use this averaged dataset for plotting few graphs.

To create a bar chart, we have first taken an average of all columns of wine dataframe by grouping it according to the wine categories column.

In order to create bar chart, we need to pass chart type "bar" to kind parameter. 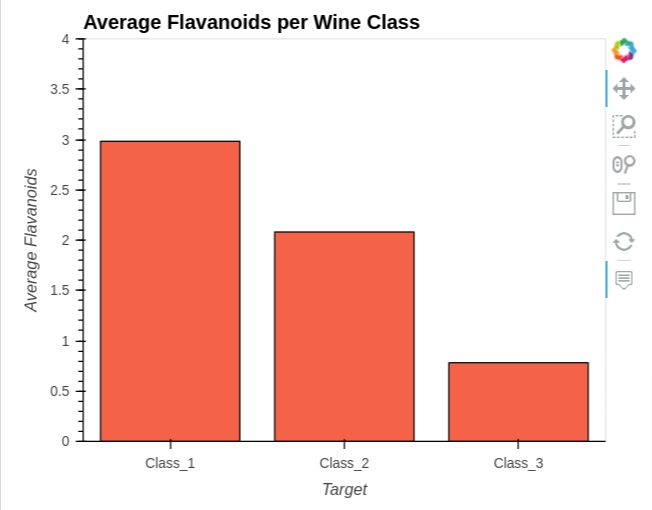 Below, we have created a grouped bar chart by calling hvplot() method and passing it columns ["malic_acid", "ash", "total_phenols"] to compare quantities. We also pass kind=bar to create bar charts. 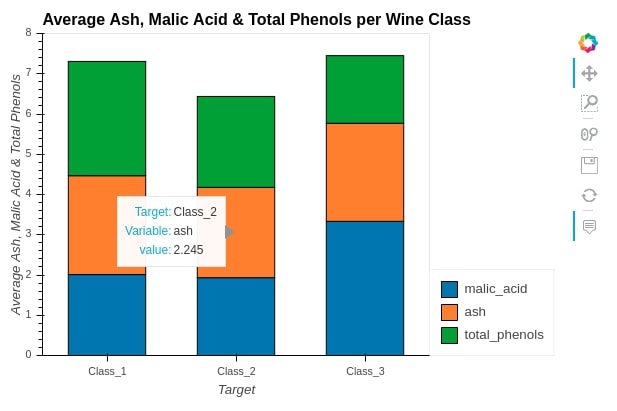 We can also call methods on hvplot like we can call on the plot method of pandas. We have explained further through the below example.

We can call methods on the hvplot module of pandas dataframe as well. We'll now call barh() method to create bar chart of ["color_intensity", "hue"] by wine categories. 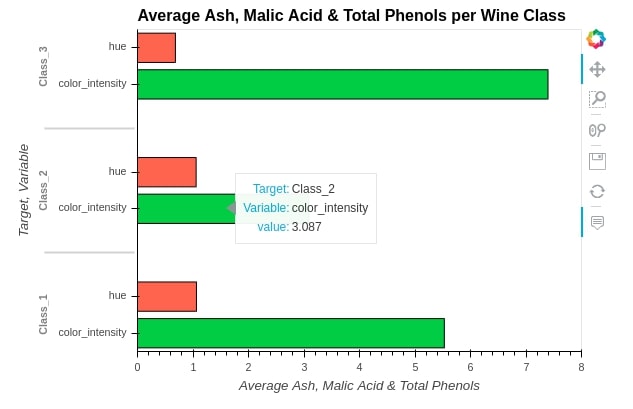 We can easily create a scatter plot by calling the scatter() method on the hvplot module by passing x and y values. We even color-encoded points according to wine categories by passing by='Target' or color="Target". 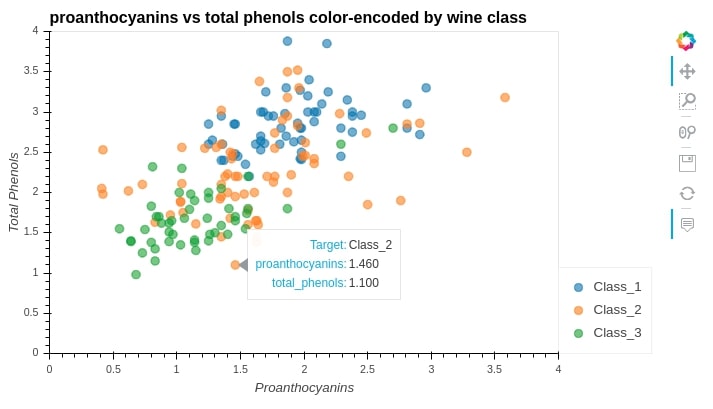 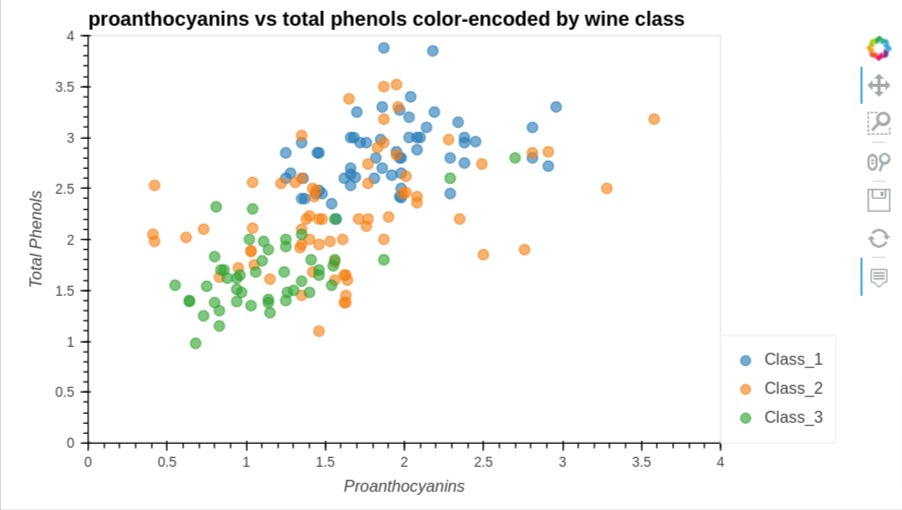 We can create histogram by calling hist() method on hvplot by passing malic_acid to plot histogram of malic_acid. We can change bins by passing a number of bins to bins parameter. 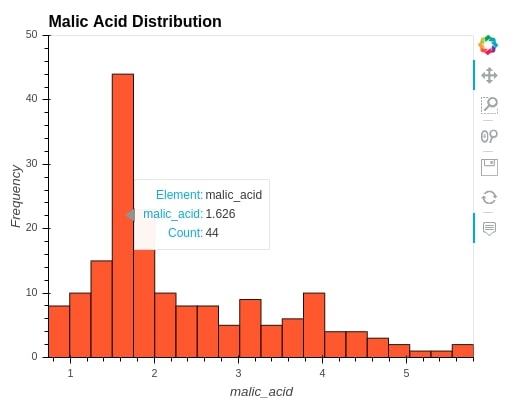 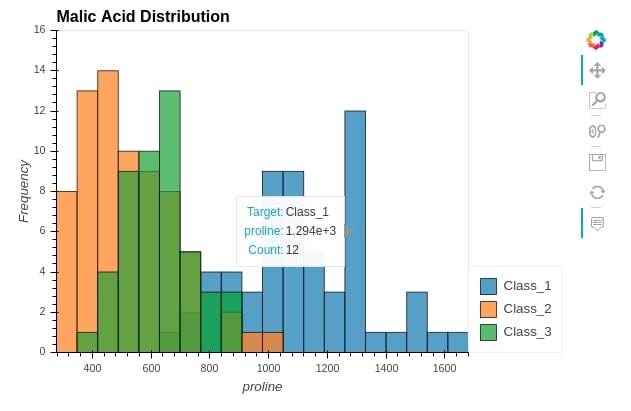 We can also create Kernel Density Estimation graphs by passing the column for which estimation is needed. 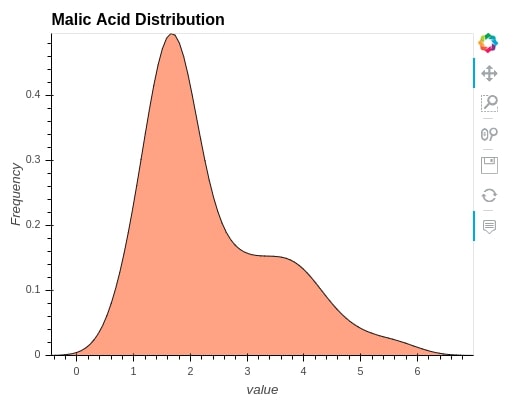 We can create overlapped KDEs the same way we created overlapped histograms. 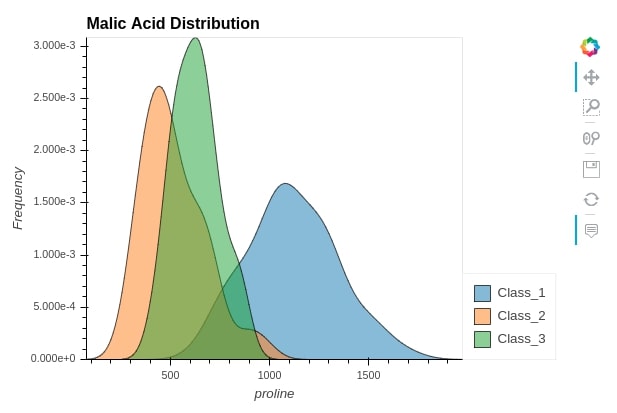 We can create a box plot by passing a list of columns for which box plots are needed as a list. We are creating box plot for ["malic_acid", "ash","flavanoids", "total_phenols"]. 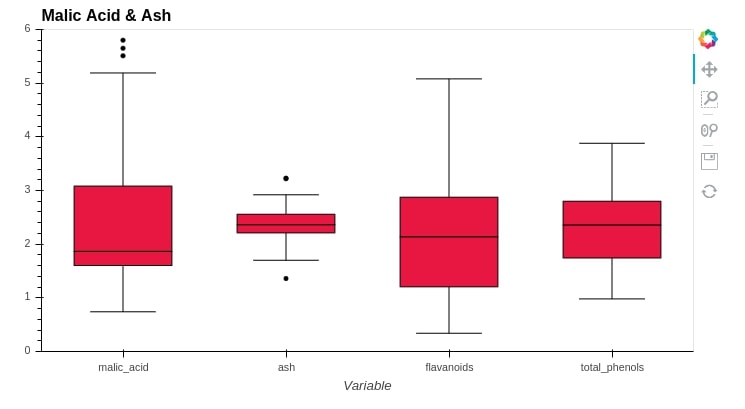 We can also create a box plot for one variable according to different categories. We are creating below proline box plot for its distribution per wine category. 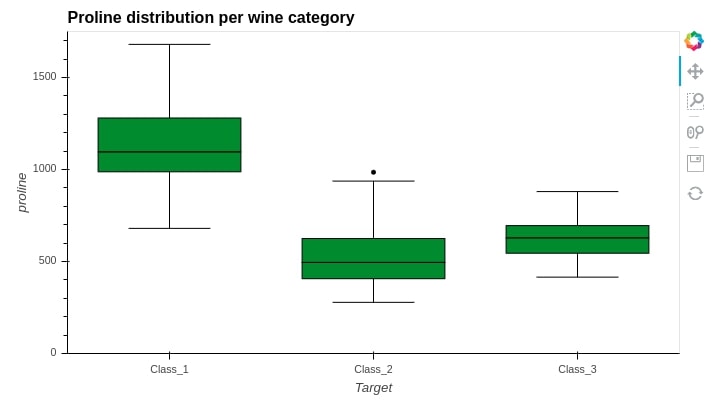 We can easily create bar charts by calling hvplot() method x and y values as it'll create a line chart by default. The line chart is ideal for time-series plots where we use datetime as x axis and other quantities as y axis. We can pass more than one column as a list to y parameter so that it creates a line chart for all of them. 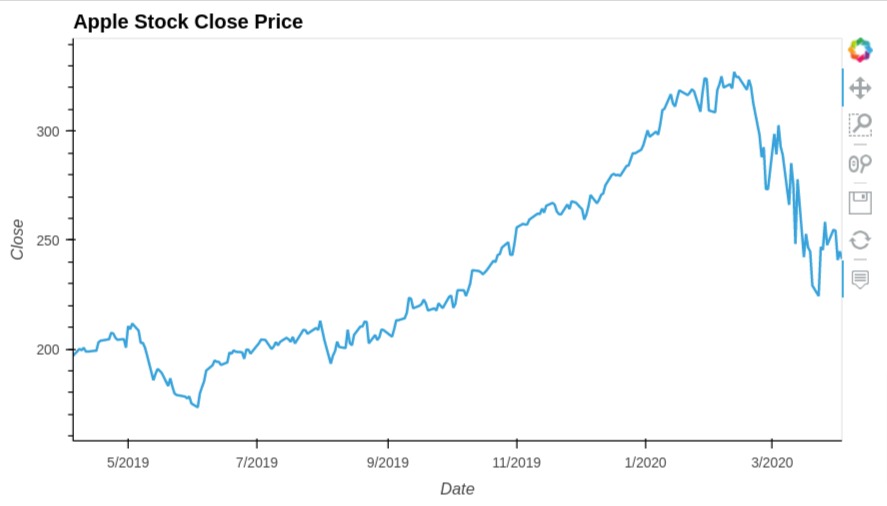 Below, we have created one more line chart where we are displaying more than one lines. We have displayed open, high, low and close prices of apple stock. 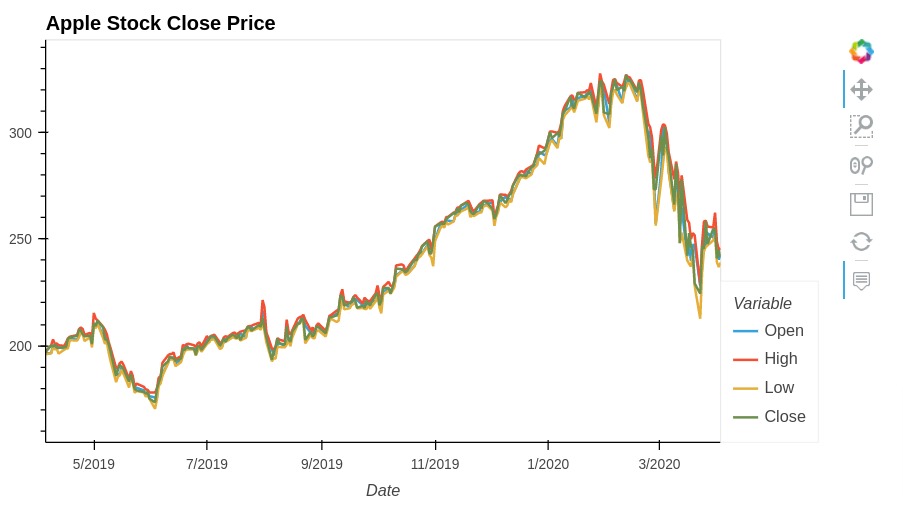 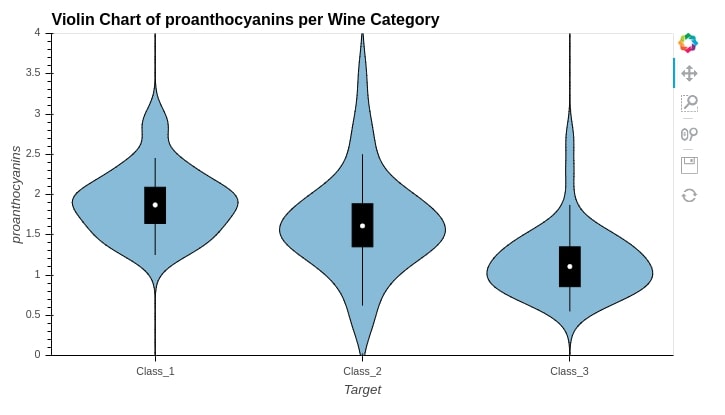 We can easily create area chart by passing a column name to area() method.

We can pass more than one column to area() method to create an overlapped area chart. We can either keep them stacked over one another or prevent them from stacking over one another using stacked parameter.

We can even plot dataframe data as tables by calling table() method with column names.

If you want to know parameters of any method of hvplot like bar(), barh(), violin(), scatter(),etc then you can press Shift + Tab inside method parenthesis and it'll load list of parameters to explore further. It only works in jupyter notebook.

Hvplot also lets us merge more than related graphs to create a figure of related graphs and it can also let us overlay one graph over another. It supports 2 kinds of operations for this.

We'll start with '+' operation to merge 3 bar charts. We'll create a bar chart of malic_acid, alcohol and magnesium grouped by wine category. We'll then merge all of them using '+' operation. 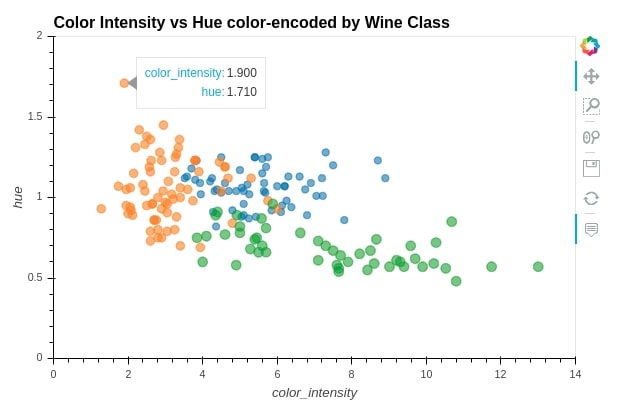 Below we have created another example of * operation by merging area and step graphs of ash attribute. 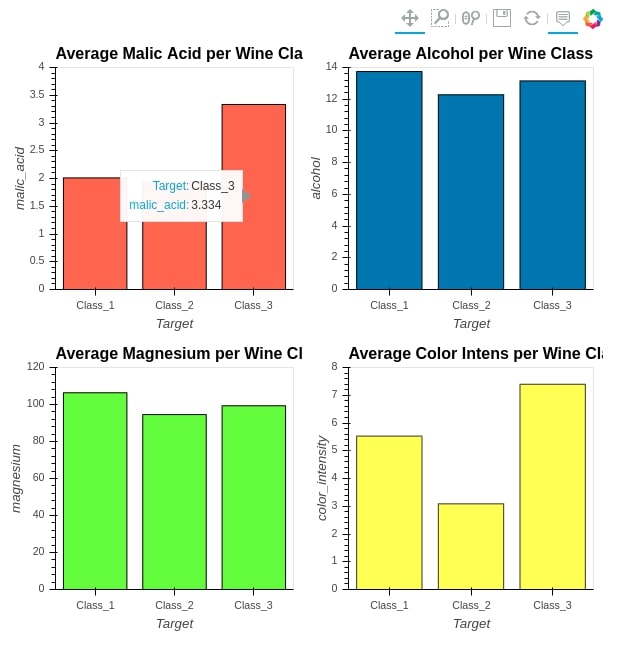 Below we have given another example of + operation where we are merging bar chart and table. 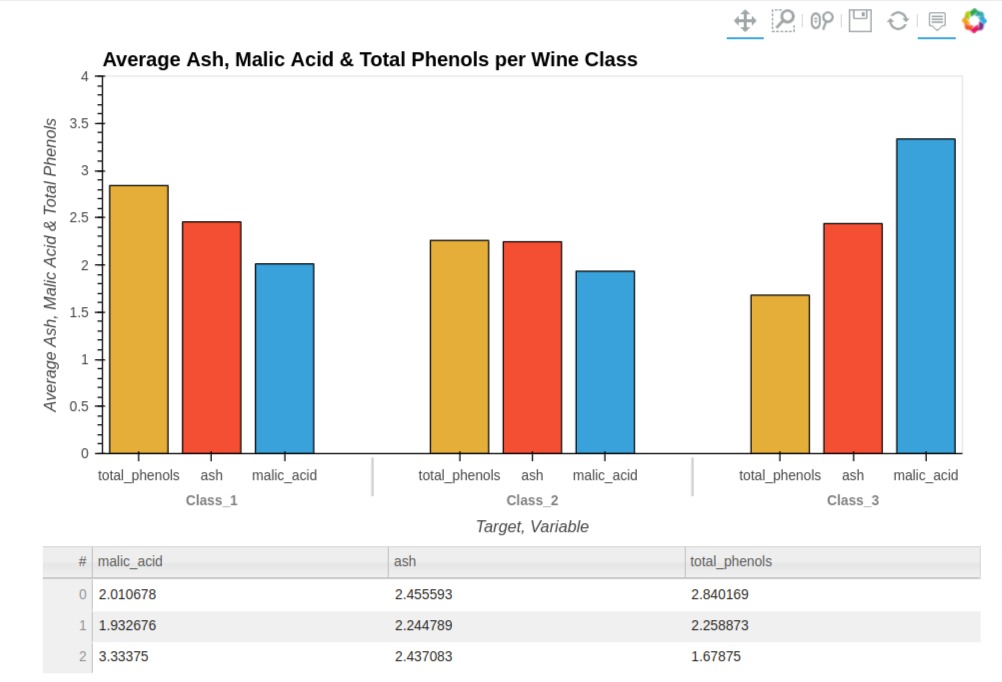 This concludes our tutorial on converting static pandas plots to interactive plots. We tried to cover as much material as possible. To summarize, hvplot module which we used to create interactive graphs makes use of holoviews library for plotting which is based on bokeh.

Apart from hvplot, python has two other libraries that let us create interactive charts from pandas dataframe with just one line of code.