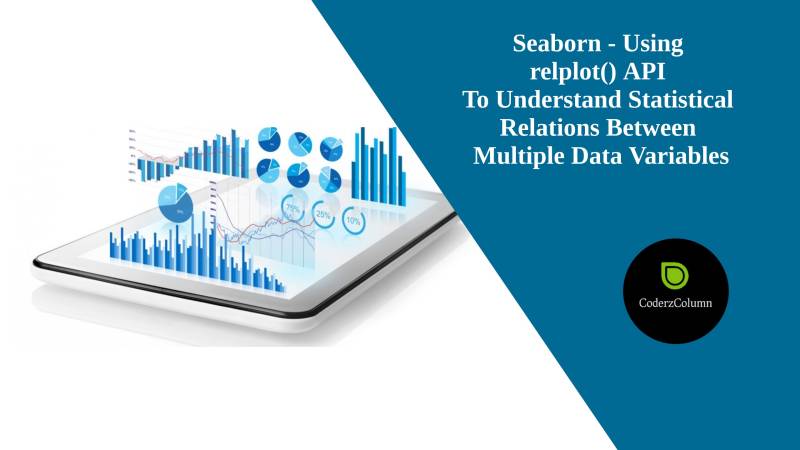 As a part of this tutorial, we'll be exploring seaborn functionalities for understanding the statistical relationship between multiple variables. We'll be using various datasets available by default with seaborn for understanding usage of the library.

So without further delay, let’s get started with coding to understand seaborn usage better.

The first dataset that we'll load is dots dataset available from seaborn. We'll load it and print its size and first few rows to better understand its contents.

Our second dataset is a famous auto mpg dataset that has information about car models generated over years from various manufactures. We'll load it, display its size and first few rows to check its contents.

The third dataset that we'll load is apple OHLC data downloaded from yahoo finance. We suggest that you download it as well from the yahoo finance website as CSV file to follow this step.

We'll be using seaborn's relplot() method for visualizing the relationship between multiple variables as either scatter plot or as line plot. Seaborn also provides separate methods named scatterplot() for scatter plots and lineplot() for plotting line plots. We'll be using relplot() with most of our examples as it provides very easy to use interface to plot relationships and explore data further.

Below is a list of important parameters of relplot() method which we'll be exploring further: 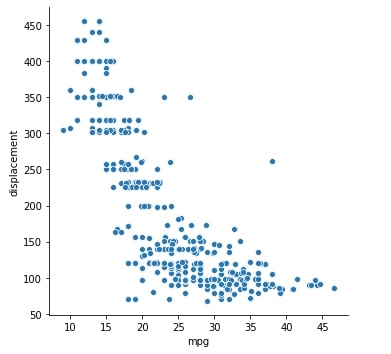 Below we are plotting the same plot as above one but with using scatterplot() method instead of replot() as both have almost the same API. 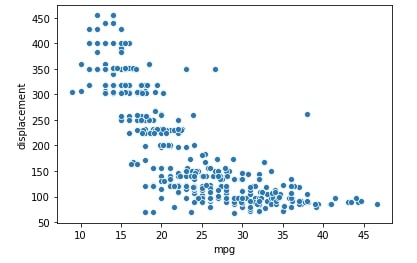 We can also change plot style in seaborn using set() method available with seaborn passing is the style name available.

Below is a list of styles available with seaborn

We can see from below plot that different color is used for different origin of cars. 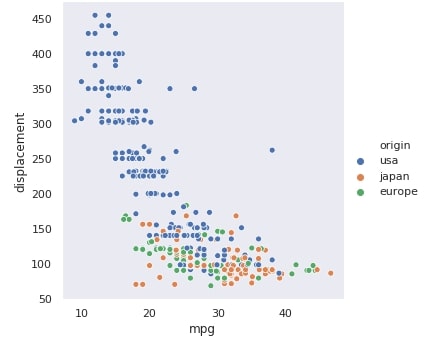 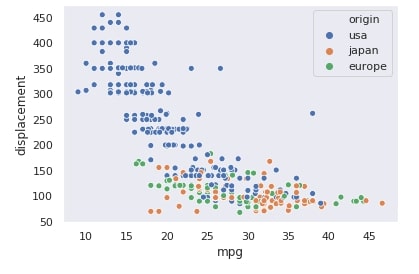 Below we are plotting mpg vs displacement scatter plot where we have used a different color for different categories of origin of cars. We have further used the fourth variable named cylinders whose categorical values are used for different marker styles for points according to different cylinder numbers present per car. 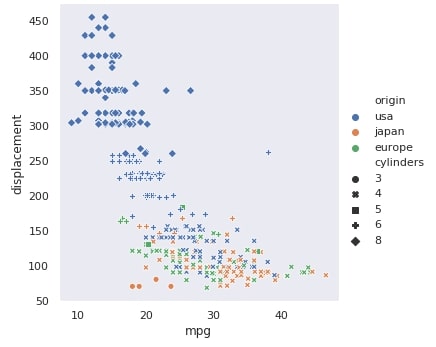 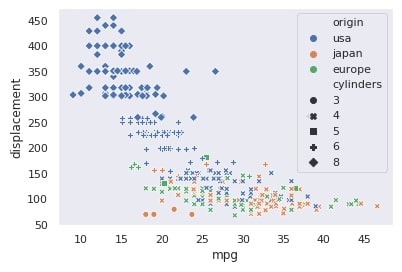 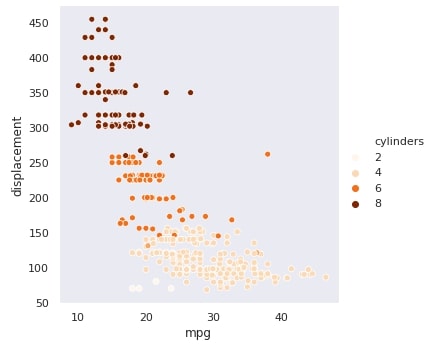 2.5 Mpg vs Displacement Scatter Plot Color-encoded by Origin and Size-encoded by Cylinders [Dark2 Palette for Colors]¶

Below we have used cylinders categorical variable to use a different sizes for various points of scatter plot. 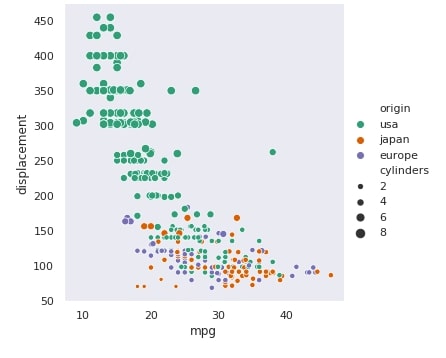 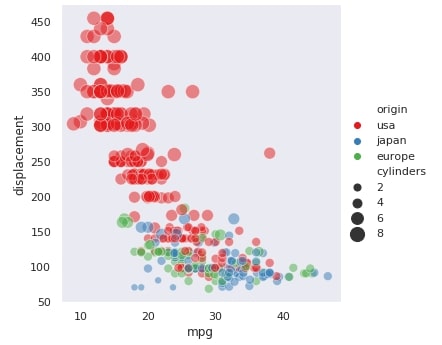 We'll now use relplot() API for plotting various line chart. We need to pass kind="line" in order for it to plotline the plot instead of a scatter plot. The kind attribute has a default value as scatter which will force it to plot scatter plot.

We'll first set our plot styling to darkgrid which is the same as dark style but with grids present.

Below we are plotting time vs coherence line plot whose value is shown aggregated in the below plot. Lighter blue area represents till how much part line values are spread and the actual line represents aggregated data line. 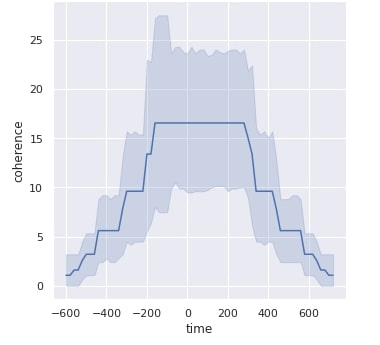 Below we are plotting exactly the same plot as above one but with using lineplot() method instead of relplot(). 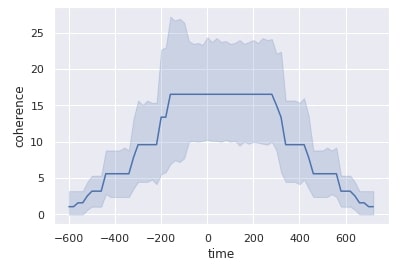 Below we are plotting above mentioned line without aggregating its data hence it looks wiggly. 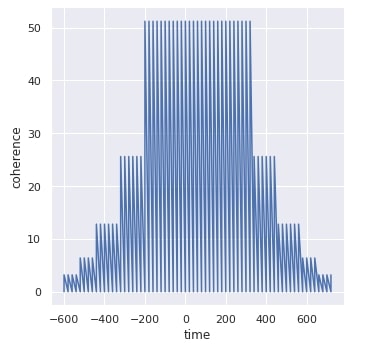 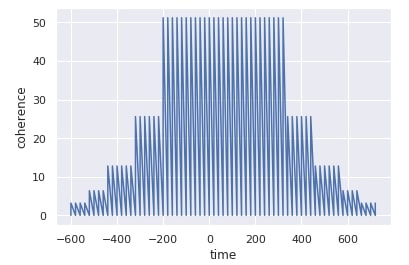 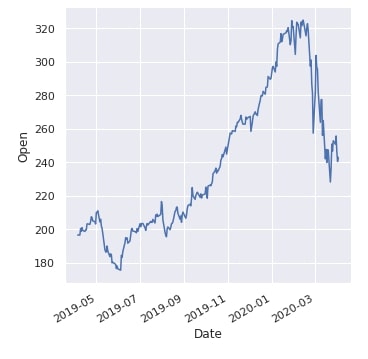 3.5 Time vs Coherence Line Plot with Different Lines for Choice Variable of Data.¶ 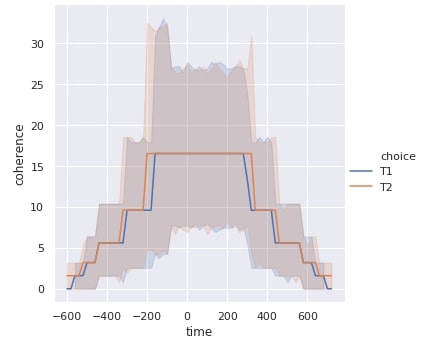 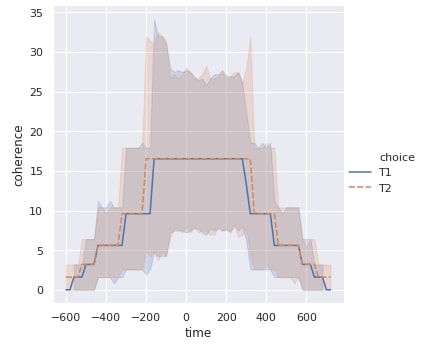 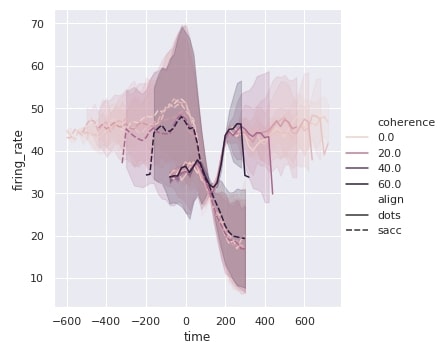 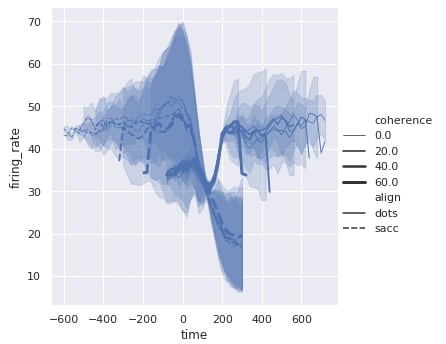 4. Visualizing Relations with Multiple Plots Based on Categorical Variable. ¶

Till now we have analyzed the relationship between multiple variables within one plot only. We can add one more facet of exploration to our data by plotting different plots for the categorical variables. We can plot multiple charts depicting the relationship between multiple variables with each chart representing one category of a categorical variable. We'll explain it below with few examples where we'll be plotting multiple scatter and line charts per figure.

As a part of this exploration, we'll explore a few more parameters of replot() which we had not discussed above:

4.1 Mpg vs Displacement Scatter Plot Color-encoded by Origin with One Plot per Cylinder Category.¶

In the below figure, we have one plot per cylinder count. We then plot mpg vs displacement scatter plot with different markers for different points according to cylinders. 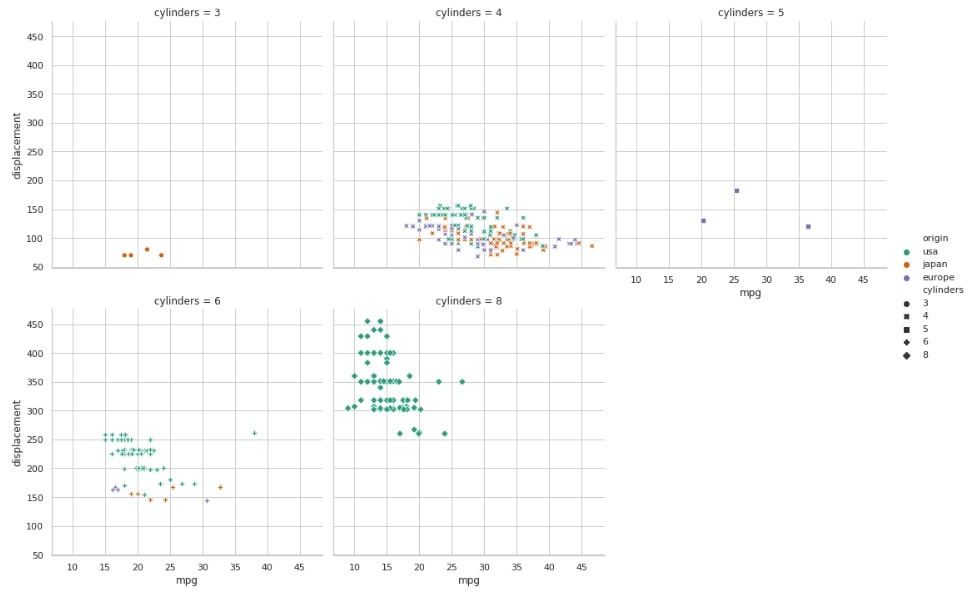 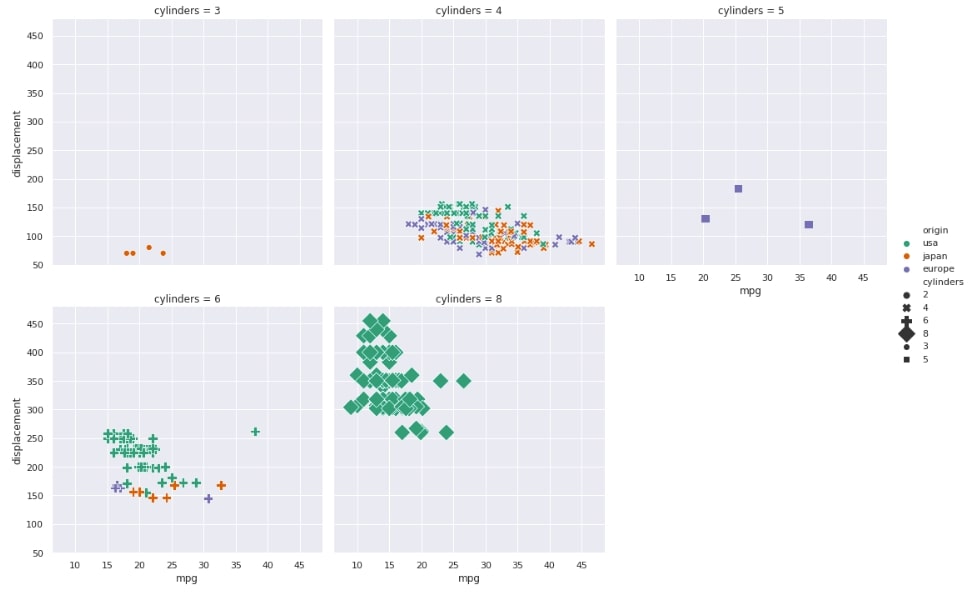 4.3 Time vs Firing Rate Line Plot Having Different Color and Line Style Per Choice Categories with One Plot per Align Category.¶

4.4 Time vs Firing Rate Line Plot Having Different Color and Line Style Per Choice Categories with One Plot per different Align and Choice Category combinations.¶

The below example demonstrates the usage of col and row parameters at the same time. We have two values per choice column and two values per align column hence resulting in 4 (2x2) charts in the figure. 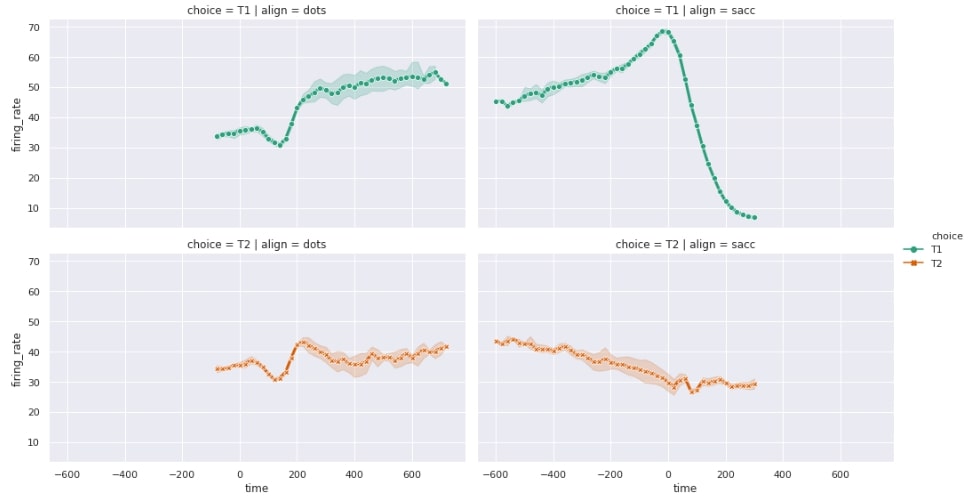 This ends our small tutorial on exploring replot() API of seaborn to understand the statistical relationship between multiple variables of a dataset. Please feel free to let us know your views in the comments section.