Streamlit is an open-source python library that lets us create a dashboard by integrating charts created by other python libraries like matplotlib, plotly, bokeh, Altair, etc. It even provided extensive supports for interactive widgets like dropdowns, multi-selects, radio buttons, checkboxes, sliders, etc. It takes very few lines of code to create a dashboard using streamlit. The API of streamlit is very easy to use and pythonic. As a part of this tutorial, we'll explain how to create a simple dashboard using streamlit by integrating charts created in matplotlib. We'll be adding interactions to charts which will let us modify charts to explore different relationships.

We have already covered one more tutorial where we explain how to create a basic dashboard using streamlit and plotly.

We expect that readers have basic knowledge of matplotlib and how to create charts using it to follow along in this tutorial. We'll also be skipping definitions of some of the streamlit functions which we have already covered in the tutorial whose link is given above. We recommend that readers go through that tutorial as well.

We'll start by importing the necessary libraries for our tutorial.

We'll be using the breast cancer dataset available from scikit-learn. The dataset has various measures of tumor like radius, texture, perimeter, area, smoothness, etc. The dataset also has a type of tumor available which is either malignant or benign. Dataset has 569 rows where 357 are for malignant tumors and 212 are for benign tumors.

Below we have loaded the dataset into pandas dataframe. We'll be using this dataframe for plotting charts to create our dashboard.

In this section, we'll explain the charts that we'll be including in our dashboard separately for explanation purposes.

The scatter plot shows relationship between two measurements where each point of scatter point is colored to represent tumor type (malignant or benign). This can help us understand how measurements are varying across two tumor types.

Our code for creating a scatter chart starts by creating a figure object. We have created an axis object using a figure object on which we'll be drawing a scatter chart. Then We have divided our original dataframe into two dataframe where one has an entry for malignant tumors and one has an entry for benign tumors. We have then created a scatter plot first using malignant tumors dataframe and then using benign tumor dataframe. We have created a chart directly by calling .plot.scatter() method on pandas dataframe. This method internally creates a plot using matplotlib and reduces the number of lines of code that we need to write if we do it using matplotlib directly. We have colored malignant tumor points with tomato color and benign tumor points with dodgerblue color. We have provided axis object that we created at the beginning to both functions calls so that both creates chart on the same axis. 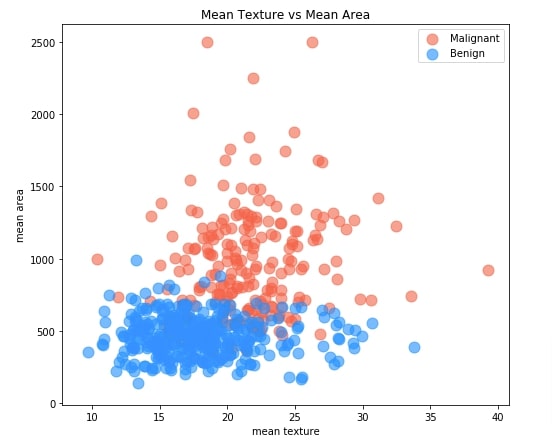 Side by Side Bar Chart¶

Below we have created a side-by-side bar chart which shows an average of measurements mean radius, mean texture, mean perimeter, and area error per cancer tumor type. By default, these four values will be displayed in the dashboard.

Our code starts by creating a figure and axis objects. It then filters our average measurements dataframe which we created in the previous cell to include information about four measurements we mentioned earlier. The chart is created using this dataframe by calling .plot.bar() method on it. 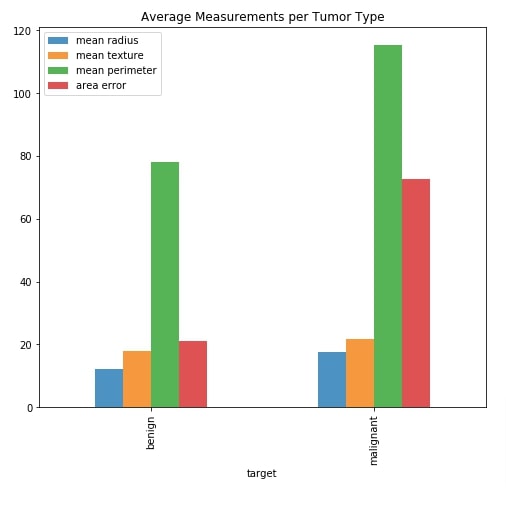 Our code starts by creating a figure and an axis object. We then create a dataframe that has an entry for only mean radius and mean texture. The histogram is created by calling .plot.hist() method on this dataframe. 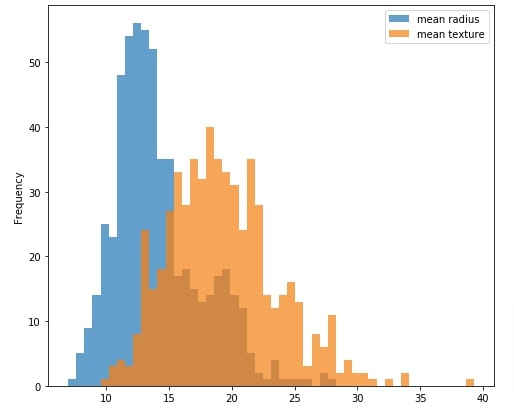 The hexbin chart is useful to show a relationship between two attributes explaining the density of samples. The chart has hexagons in it where the color of a hexagon is based on a number of data samples that fall in that hexagon. The darker hexagon represents the presence of more points in it.

Our code for this example starts by creating a figure and axis objects. It then creates hexbin by calling .plot.hexbin() method on our original breast cancer dataframe. We have provided mean texture to be used for the x-axis and mean area to be used for the y-axis. 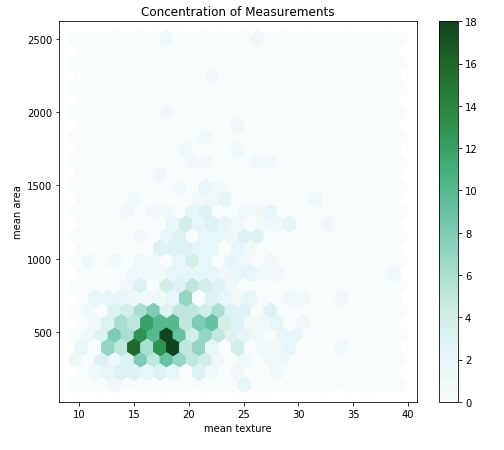 In this section, we'll briefly explain the widgets and containers that we'll be using in our dashboard. We'll be using widgets to update charts and explore different relationships.

Putting it All Together ¶

In this section, we have included code for the dashboard. We have put together all charts, widgets, and containers that we discussed till now to create a final dashboard. We'll now explain the code of the dashboard.

If you want to see the definition of methods used in this tutorial then please feel free to check our tutorial explaining how to create a dashboard using streamlit and plotly whose link we have given at beginning of the tutorial and also in the reference section at the end.

Please make a note that each time you make a change to dashboard file, it'll show a button named Rerun on top-right corner of dashboard. Clicking on this button will rerun original file again to create dashboard with new changes.

You can execute the below command in shell/command prompt and it'll start the dashboard on port 8501 by default.

This ends our small tutorial explaining how we can create a basic dashboard using streamlit and matplotlib. Please feel free to let us know your views in the comments section.