The bqplot is an interactive plotting library of Python. It's developed by the Bloomberg development team. The bqplot is developed on top of ipywidgets widgets library hence all component of bqplot chart is a widget. The bqplot provides two different API for creating charts.

We have already covered a tutorial on creating charts using matplotlib pyplot like API. As a part of this tutorial, we'll be covering an internal object model API which is very flexible. It lets us create individual chart components (like axis, scales, glyph, figure, etc.) and then merge them all to create full chart. We'll be using datasets available from scikit-learn for plotting various charts.

If you are interested in learning bqplot's matplotlib pyplot like API then please feel free to refer to our tutorial on the same:

We also suggest that you learn about ipywidgets as it'll help you with this tutorial. If you are interested in learning about ipywidgets then please feel free to go through our tutorials on the same.

We'll be converting each dataset into a pandas dataframe in order to better maintain it and make it more usable for charting purposes.

Below is a list of steps that will be commonly followed to create an interactive chart using bqplot.

We can easily save the bqplot chart as png, or SVG format. We need to call the save_png or save_svg method on the figure object passing it filename by which to save the chart.

Below we are again creating a line chart using the same steps as the previous chart but this time we have added two lines to the chart. We have added lines for open and close prices both. The values that we pass to the labels attribute of Lines will be used to create a legend. We also have changed marker style and marker size for the line chart. 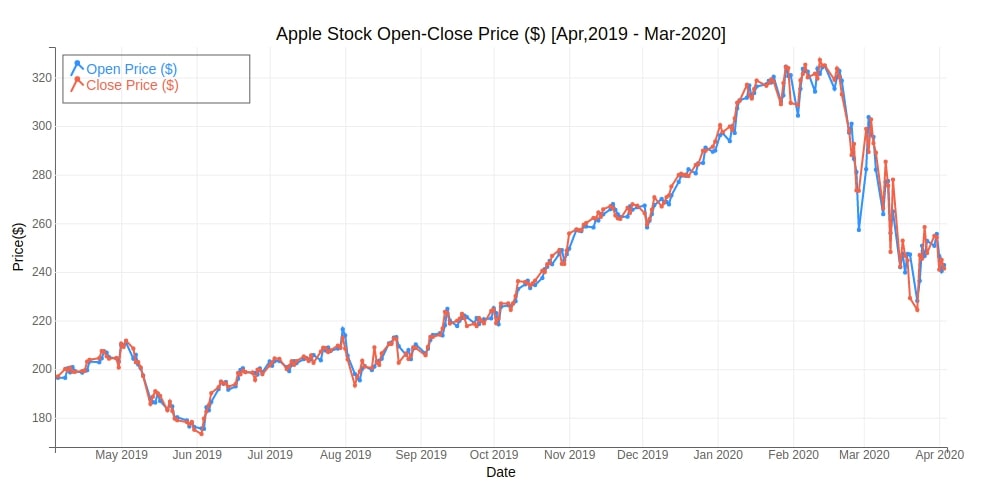 Below we are creating an area chart that covers the area covered by the closing price of Apple stock. We can create an area chart by using the same code as that of the line chart from the previous step with the addition of only one parameter to the Lines() method. We need to pass the fill parameter with the value bottom. It'll fill the area below the line. 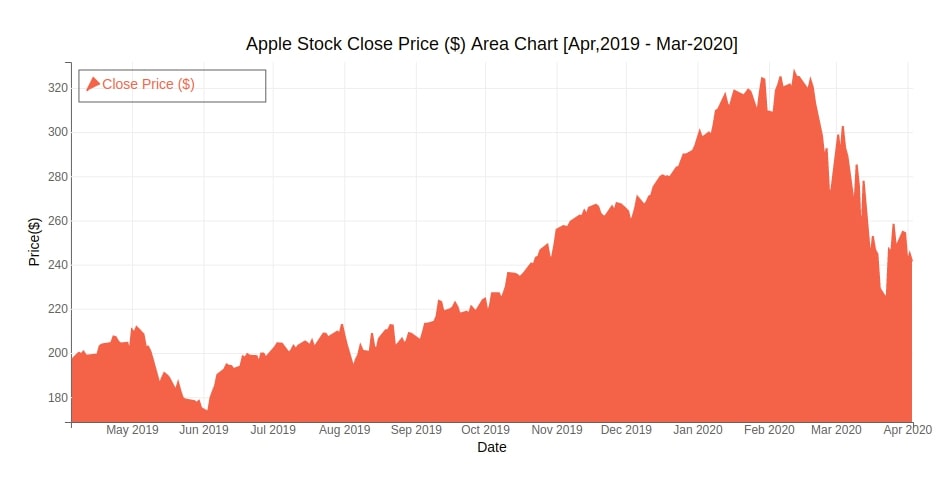 Below we have created anther area chart with the area under open and close prices getting highlighted. We have used the same steps as previous to create an area chart. We have changed opacities for both area charts using the fill_opacities attribute. We have passed two floats for two area charts. All other code is the same as that of the previous step.

The third chart that we have created using the bqplot object model API is scatter plot of sepal length and sepal width of IRIS flower data. We have created both X and Y scales as LinearScale for this chart. We have also modified the attribute of charts like default_opacities and default_size to change opacities and size of the circle marker.

We also have set offset for the X and Y axis as well have introduced tick formating.

We can add a tooltip to the chart by creating an object of class Tooltip and setting it as tooltip attribute of the chart as explained below. We need to pass the tooltip list of fields from the chart whose values will be displayed in the tooltip along with labels for that fields to the Tooltip constructor.

Below we have created another scatter chart the same as the previous step but this time we have modified even more attributes of axis, chart, and figure. We have modified grid colors, tick style, grid line format, tick format, axes label colors, tick colors, etc.

Below is another example of a scatter chart which is the same as the last chart but with more modification of various chart attributes. We have modified marker style as well as have added labels for each marker. 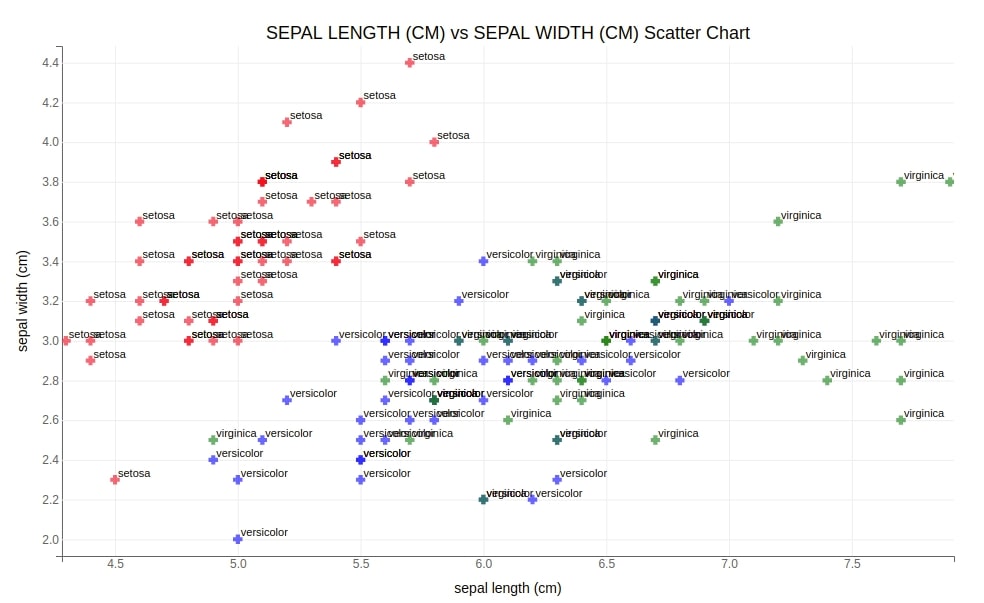 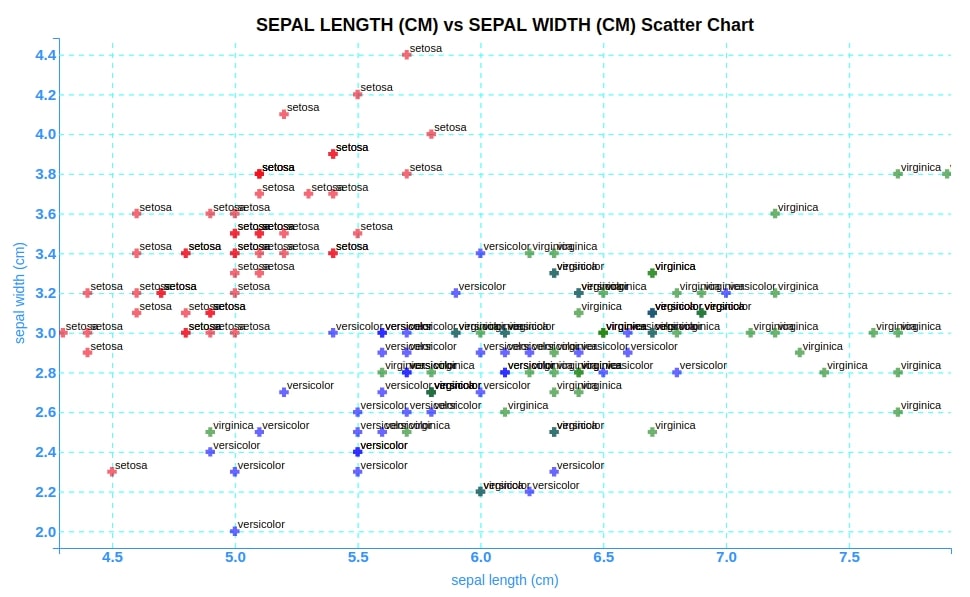 The fourth chart type that we'll introduce is the bar chart. We'll be plotting below bar chart avg malic acid used per each category of wine.

We have first created a dataframe that has information about the average quantity of each ingredient per wine category. We'll be reusing this dataframe in the future as well.

We have created X-axis as OrdinalScale and Y-axis as LinearScale. The reason behind using OrdinalScale for X-axis is due to only three different categories of wine.

We have then created axes for both the X and Y axis using scales for them along with various axis attributes. We also have a modified the figure size this time by setting width and height of the layout of the figure. As bqplot is internally based on ipywidgets, it provides a layout attribute like ipywidgets widgets. 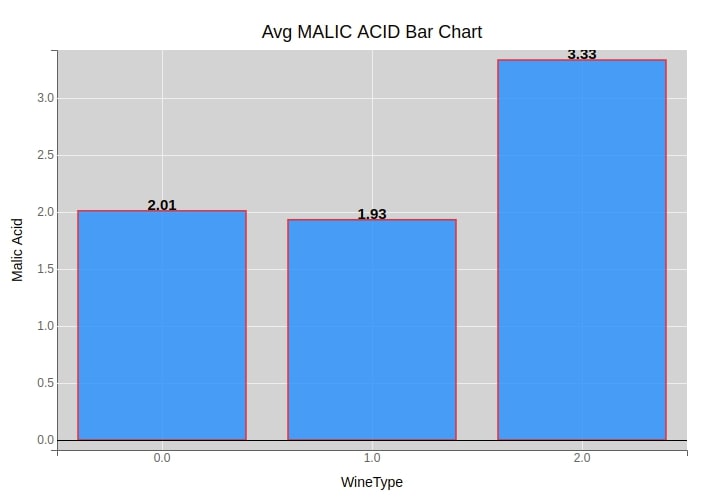 Below we have created the same bar chart as the previous step but this time bars are laid out horizontally. We have also modified a few chart attributes like bar colors, label colors, grid colors, background colors, etc. 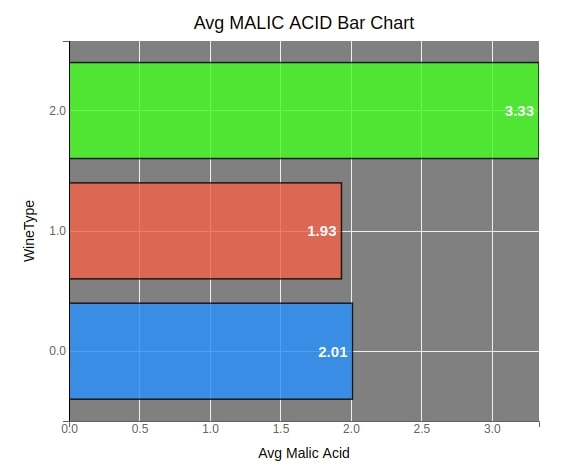 Below we have created another example demonstrating bar chart creation using bqplot object model API. This time we have created side by side bar chart explaining the average alcohol, average malic acid, and average ash per each wine category. We have even modified various chart attributes to improve the look and feel of the chart. 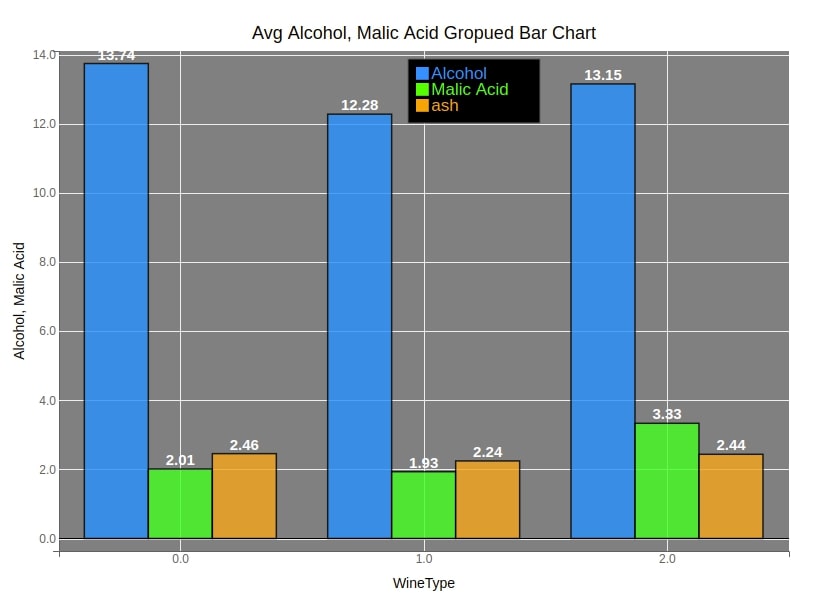 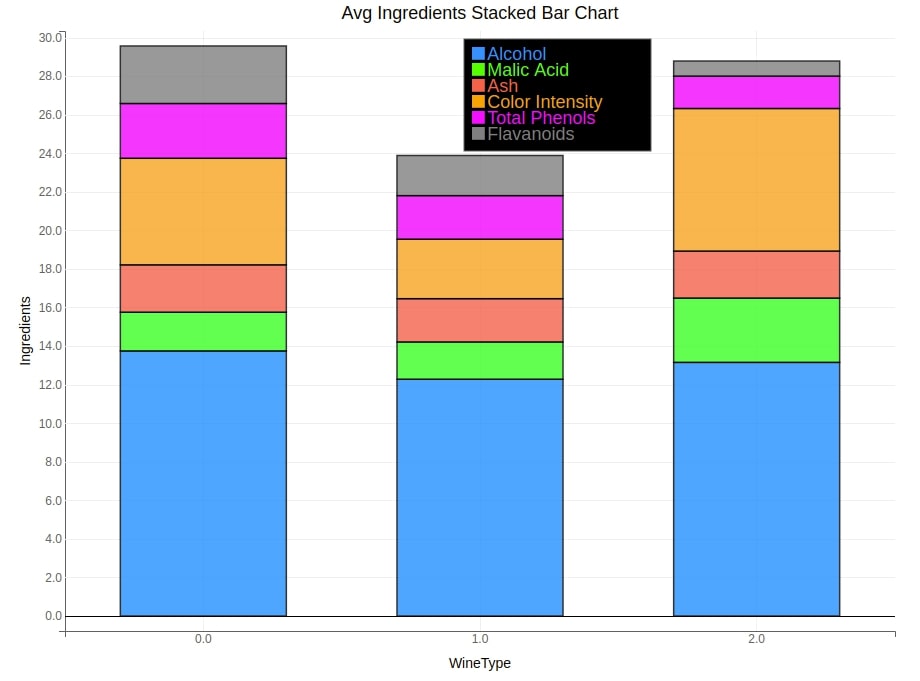 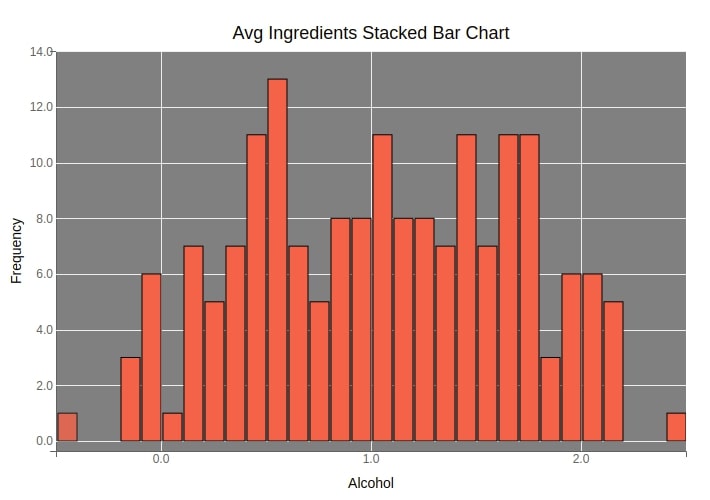 The sixth chart type that we'll introduce plotting using bqplot object model API is a pie chart. We have created pie chart showing the distribution of wine data examples per each category of wine. We have created a pie chart using the Pie() constructor. We have even modified various attributes of the chart to improve chart look and feel like the radius of the circle, the radius of the inner circle, label colors, label size, values format, font-weight, etc. 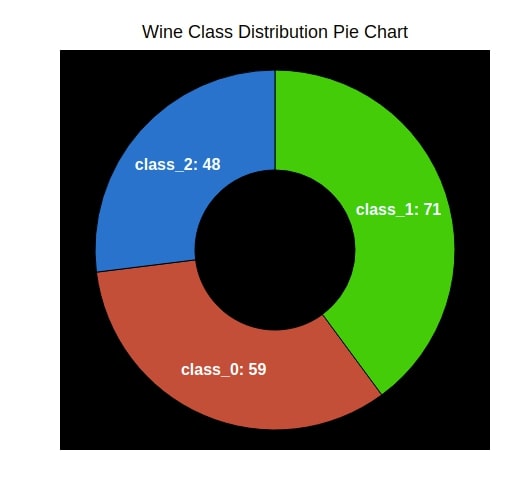 Below we have created another pie chart based on the same data as the previous step with the only difference is that we have not used the whole circle to show distribution. Instead, only 75% of the circle is used for showing distribution. We have modified various chart attributes like the previous steps to improve aesthetics. 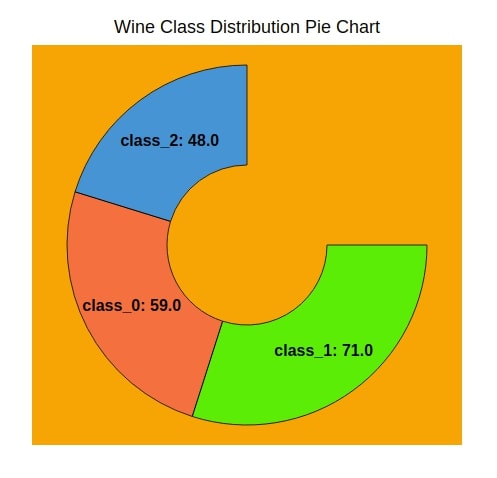 The seventh chart that we'll plot using bqplot is a box plot. We have created another dataframe from the original dataframe by keeping only a few columns that will be used for the box plot chart. We have created the X-axis scale as OrdinalScale because of different columns used for the box plot. The Y-axis scale has been created as LinearScale to show the spread of data of each column. We have created a box plot using the Boxplot() constructor available from bqplot passing scales for both axes. We have also modified various chart attributes like outlier color, line color, box width, background color, grid color, etc. 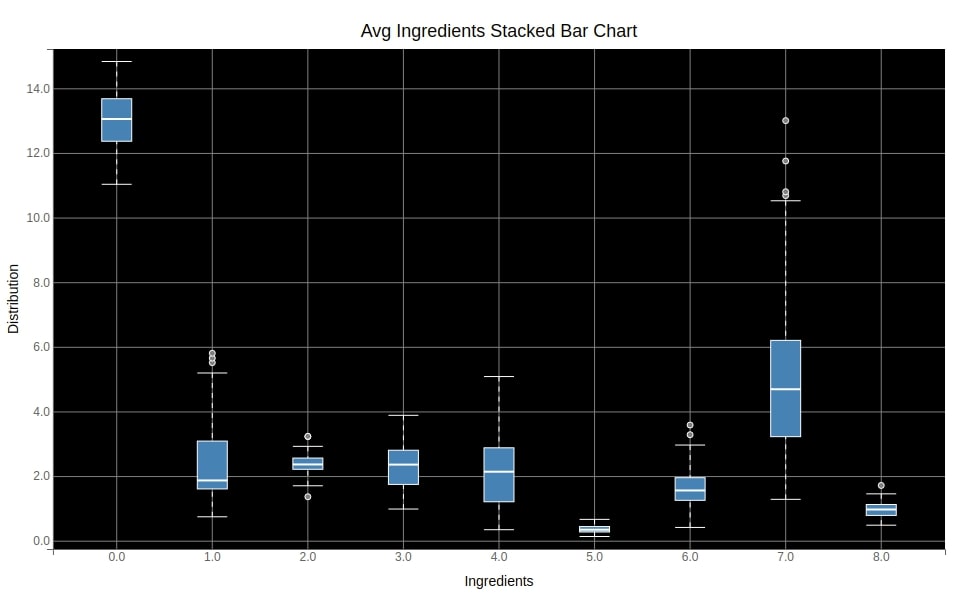 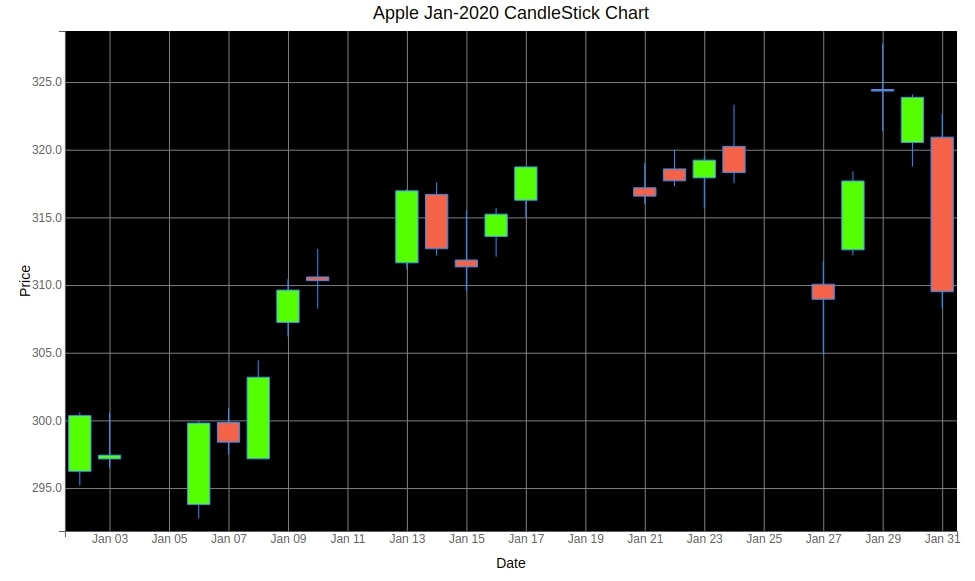 Below we have created another candlestick chart which is sometimes referred to as ohlc chart as well. We have used almost the same code as the previous step with one major change which is setting the marker attribute of OHLC() constructor to bar instead of candle. 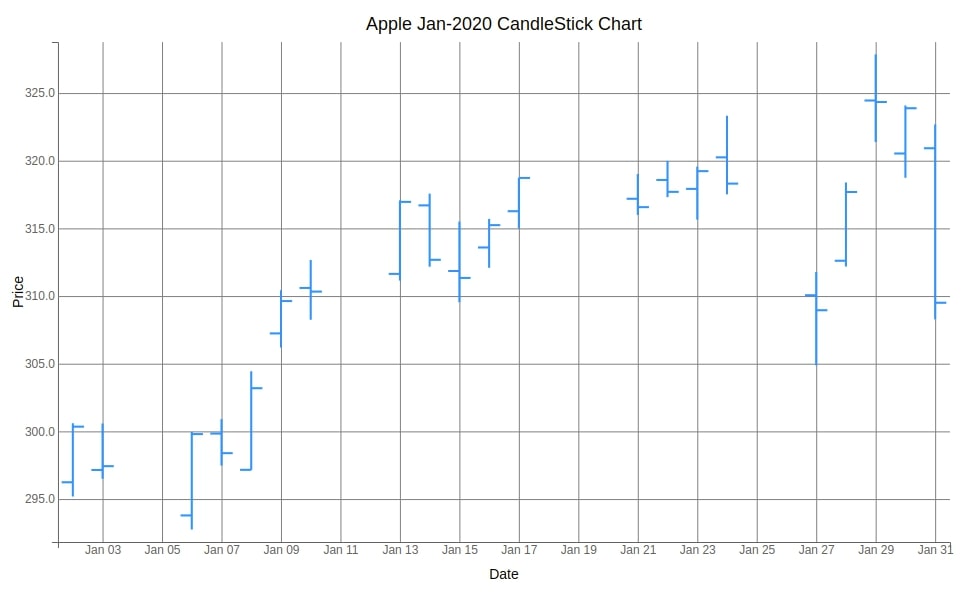