Getting Started with Holoviews - Basic Plotting¶

We'll start loading the wine dataset available in scikit-learn. It has 13 features and target variable with 3 different classes of wine. We'll keep the total dataset into pandas dataframe so that it becomes easily available for plotting and manipulation.

We'll start importing holoviews and then set its backend using the hv.extension() method. We'll be using bokeh and matplotlib backends interchangeably to explain how the same holoviews code can be used for both(matplotlib & bokeh).

Holoviews maintains metadata about your plot and it does not do any plotting by itself. It just organizes metadata about how to plot data and uses it's underlying back-end library like bokeh, matplotlib or plotly to actually plot data.

Please make a note that if you don't provide any back-end then it selects bokeh by default.

We are plotting the scatter plot below to show the relationship between alcohol and malic_acid values in wine. We can see that just one line of code is enough to create a simple interactive graph. We need to pass the first argument as a dataframe that maintains data and then kdims and vdims to represent x and y of a graph. 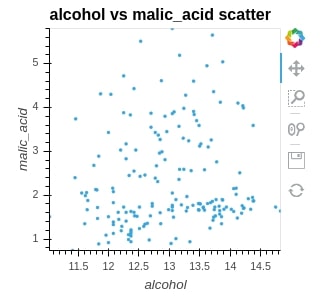 To plot the bar chart, we are grouping dataframe by Target variable, taking an average of all columns and then filtering dataframe with only one column named malic_acid. We then just pass that to the Bars method to generate a bar chart. 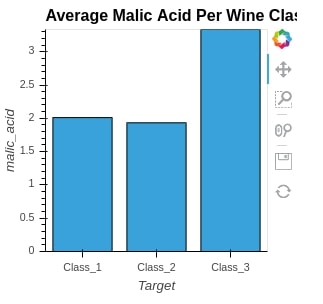 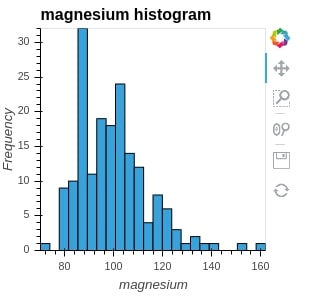 We can generate box whisker plot easily by passing kdims=Target and vdims=total_pheonols. It'll generate distribution of total_phenols values per each wine class. 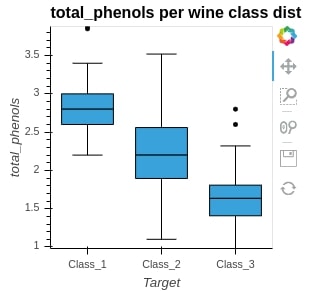 We can also generate basic line charts and points chart using holoviews as described below. 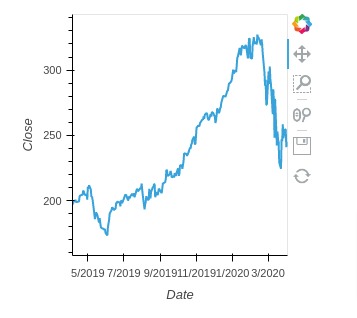 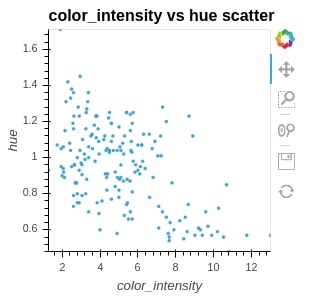 We can notice by looking at all the above graphs is generated using bokeh. It shows the bokeh symbol as well in the toolbar to confirm it.

We'll now print holoviews objects which we created above to see their structure further which can give us meaningful insights.

As we already discussed above that holoviews just maintains plotting metadata and uses underlying back-end python library for plotting, we'll now explain below on how can we change different back-ends according to our needs. It won't require any code change in plotting graphs to change back-end.

We can change backend by simply calling the extension() method and passing it a new backend. It'll then start using that backend for plotting. Below we have initialized holoviews with matplotlib backend.

We can see that we have clearly used the same code for generating a matplotlib graph without changing code even a little bit. We might need to sometime change some argument of code as parameters might be different for the different backend but in the majority of cases, it'll be almost the same. 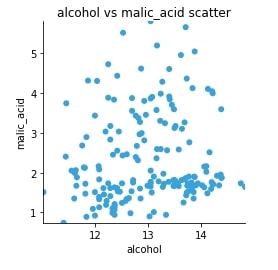 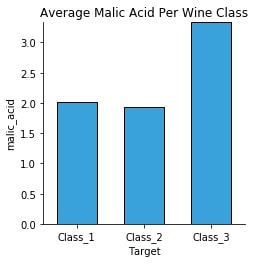 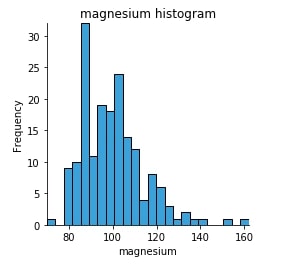 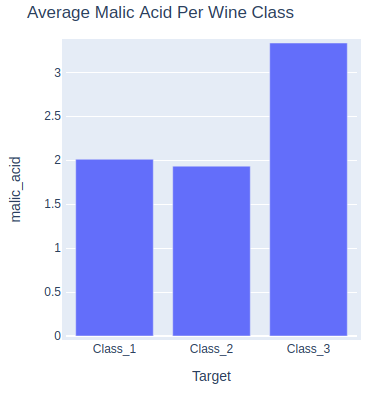 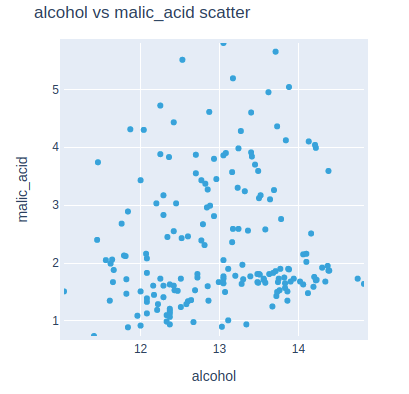 Please make a note that plotly graphs won't be interactive on our website page. It'll load properly interactive graph when you run it in a notebook.

We can notice from the majority of the above graphs that the majority of plotting options like height, width, axes labels, ticks limits, colors, etc. are default selected by holoviews.

But what if a person needs control over it and needs to change various options according to it needs?

Holoviews provided two very easy ways to provide configuration options that will be passed to underlying libraries. It'll also ignore options which do not available in the underlying library by giving warnings. We'll start setting our extension as bokeh again. 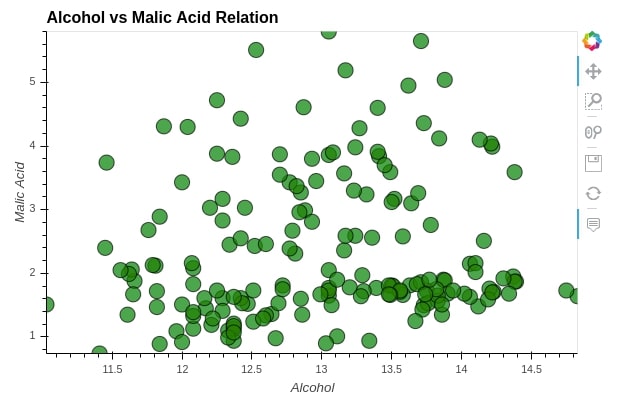 The below graph makes use of a hover color option which changes bar color when the mouse pointer is hovered over it and highlights it. 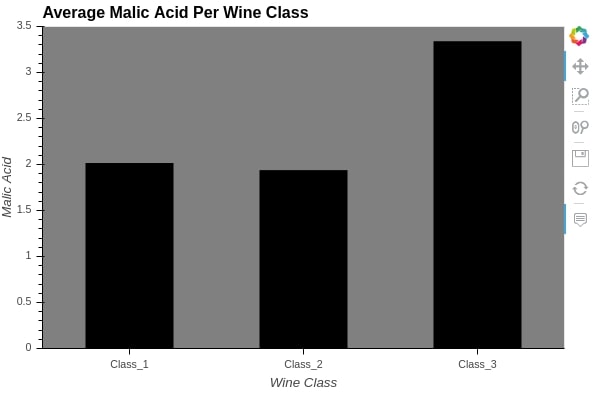 Below, we have explained another way of passing configuration options. We can also call opts() or options() method on graph object and pass it all parameters as per need. 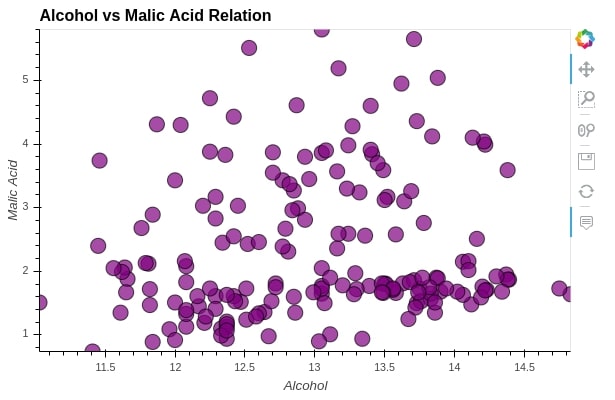 We have explained how to create basic graphs. We'll now explain how can we merge more than one graph into holoviews.

By printing bars object, we can see that it’s of type Layout. Layout objects are responsible for maintaining the layout of the charts. The above layout is set out a grid of 1 row and 3 columns(1x3). Below we'll give another example where we'll make changes to these default layout.

We can even access an individual elements as well by simply following dot notation. 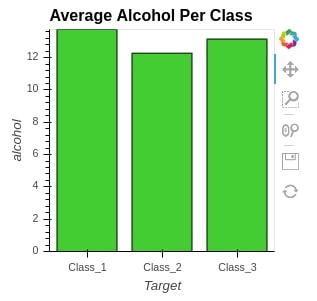 We'll now explain another merge operation using *. We'll be using * to overlay 3 scatter plots over one another. We are creating 3 scatter plot of alcohol vs malic_acid for 3 different wine categories. We'll then overlay them on each other to create a single scatter plot. 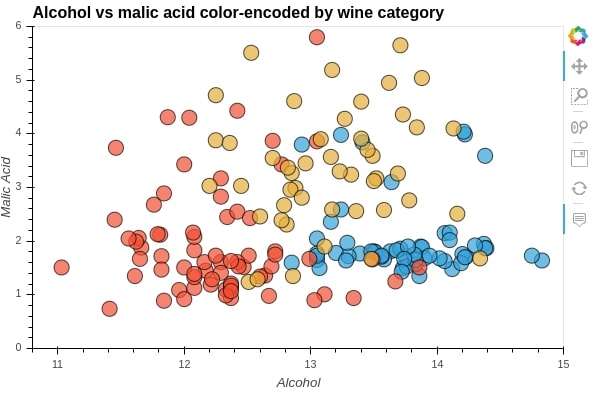 By printing the scatters object, we can see that its type is Overlay. We can access an individual elements of Overlay by simply following dot notation. 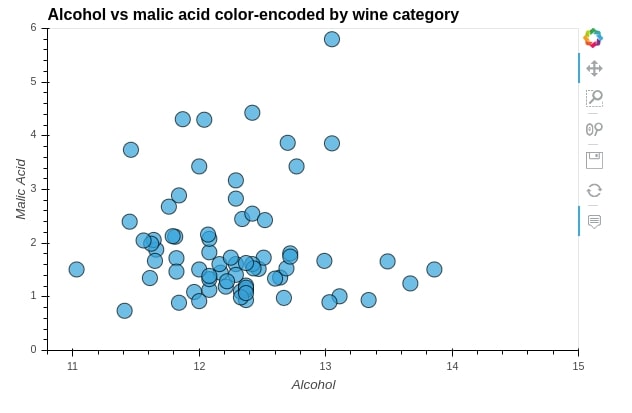 The below example explains, how can we organize a Layout object created when we merge more than one graph using + operation. We'll be using it's cols() method passing it a number of columns to organize graphs. We have below created 4 graphs and passed 2 as cols value which will organize graphs into 2 columns instead of just putting them next to each other. 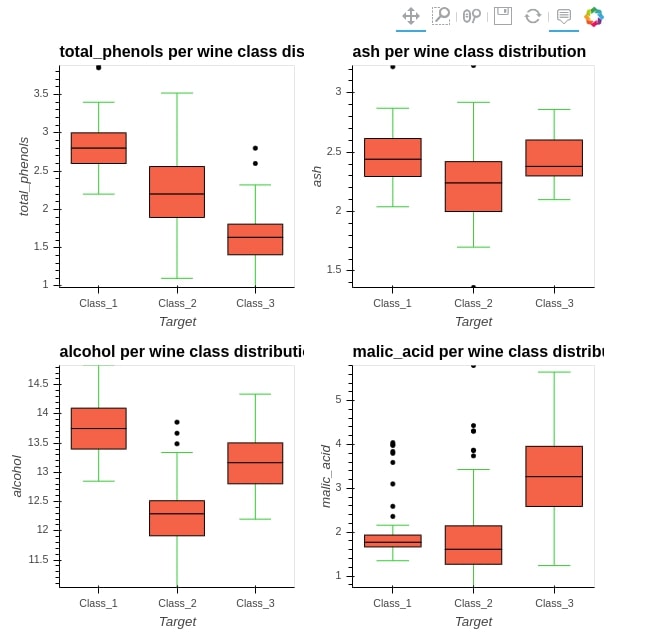 The simple process of merging more than 1 graph explained above a reduced a lot of coding from the developer side. We can even mix + and * operations into one expression to create a complicated figure.