To get started with our tutorial, we need to import all the necessary libraries. We'll be importing pandas, geopandas, maptlotlib.pyplot and plotly.graph_objects.

We'll be using flight data for a number of flights from and to Brazil. The dataset is available at kaggle.

We suggest that you download the dataset and follow along with us using the same dataset to better understand the material and get an in-depth idea about the whole process. We'll first load the dataset as pandas dataframe and then subset it to keep only columns that we'll be using for plotting.

Please make a note that original dataset is quite big with size of 600+ MB and nearly 2.5 Mn rows. If you have low RAM then you can use nrows attribute of read_csv() method to load only first few thousand entries to follow along with tutorial without getting stuck. We have loaded only 100k entries for making things simple for explanation purpose.

We'll be creating two datasets from our original dataset by cleaning it and filtering entries that we don't need.

1.1 Connection Map Depicting Flights from Brazil to All Other Countries. ¶

The first connection map that we'll create will depict flights from brazil to all other countries in the world. We would like to know where Brazilians are traveling more often. We'll be using plotly Scattergeo() method available from plotly.graph_objects module. To create a connection map, we'll loop through all source and destination latitudes/longitudes to plot scatter plot on the world map with a marker as lines. We'll first merge all source and destination latitudes/longitudes into one list and then loop through it adding one line at a time to connection map. 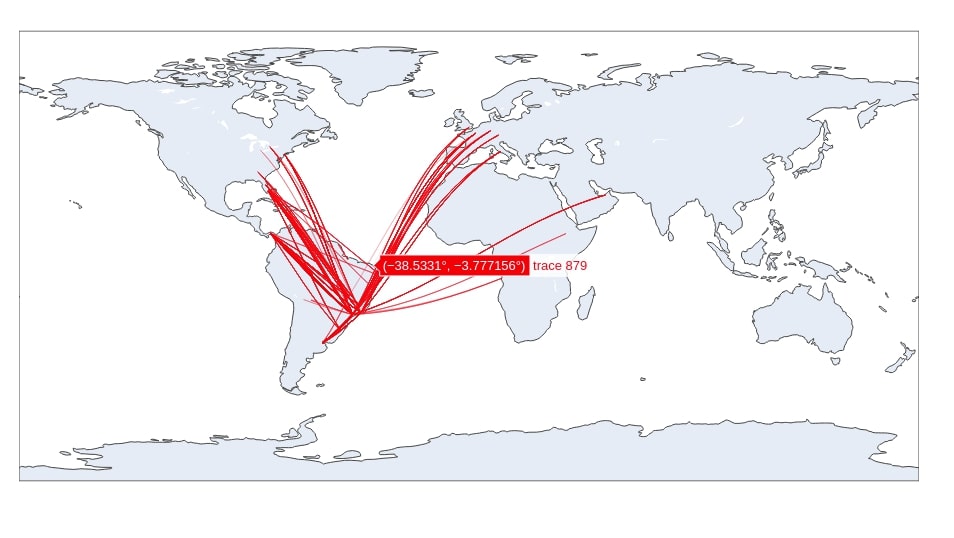 1.2 Connection Map Depicting Flights from Brazil to All Other Countries With Airport Locations as Scatter Plot. ¶ 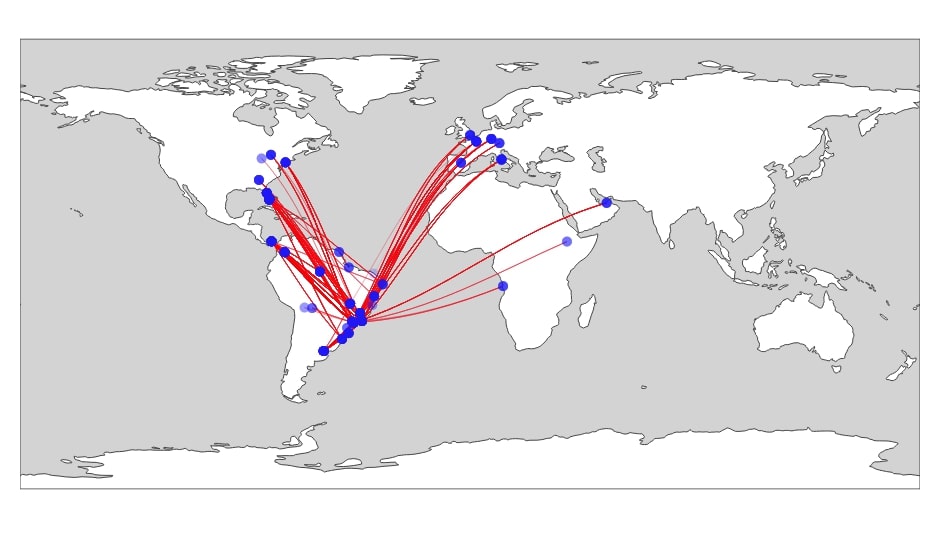 1.3 Connection Map Depicting Flights from Brazil to All Other Countries with Airport Locations as Scatter Plot [Orthographic Projection]. ¶

Our third connection map is exactly the same as the previous connection map with only a change in the projection of the graph. We have used the orthographic projection to allow the user to look at the graph from a different perspective. 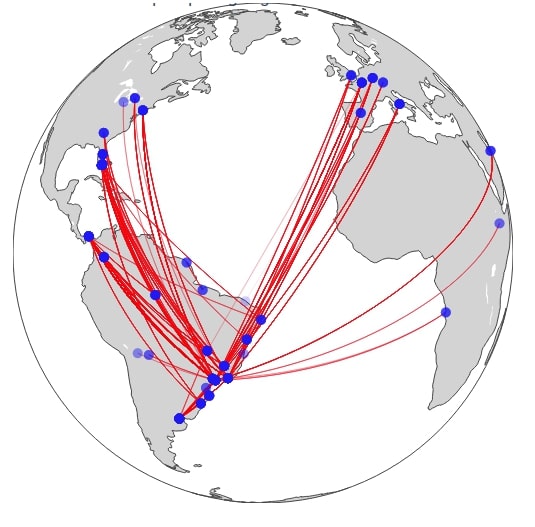 The fourth connection map that we'll be plotting will be showing all domestic flights of Brazil. We'll be using the domestic flight dataset that we created earlier to create a connection map. We'll use the same logic as that of previous maps to plot this connection map as well. Apart from that, we are also plotting only the South American continent as a part of this map. 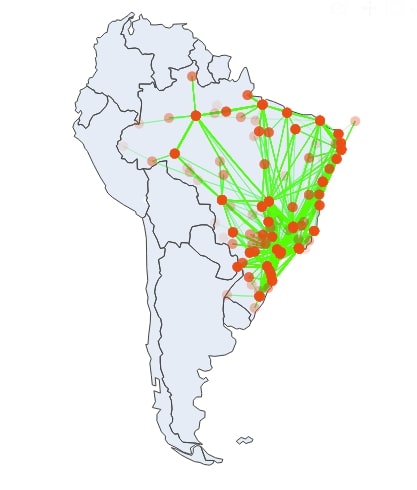 2.1 Connection Map Depicting Flights from Brazil to All Other Countries. ¶

The below plot is exactly the same as the plot depicted in section 1.1 of this tutorial. The only difference between this graph and the previous graph is that lines were bit curved in projection to give the rounded look of earth.

Plotting a connection map with geopandas and matplotlib is a very easy task. We first need to plot world map by simply calling plot() on world geopandas dataframe which we had loaded earlier. We then need to loop through each flight entry plotting lines from source to destination of that flight.

If you do not have a background that we suggest that you go through our tutorial on geopandas to get a grasp on its usage. 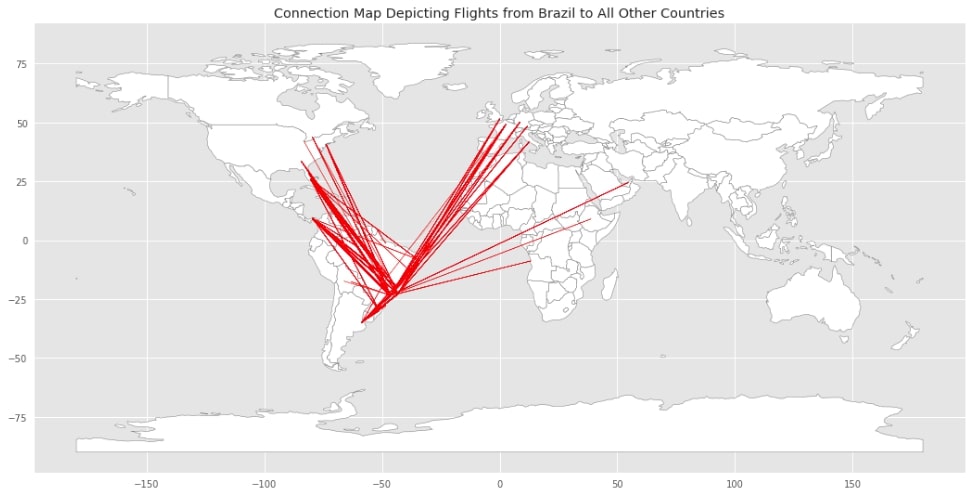 2.2 Connection Map Depicting Flights from Brazil to All Other Countries With Airport Locations as Scatter Plot. ¶

Our second connection map using geopandas and matplotlib is exactly the same as that of a previous plot but we have also added points depicting source and destination cities by blue color. We have used the matplotlib scatter() method for this purpose specifying the size and color of each point in a map. 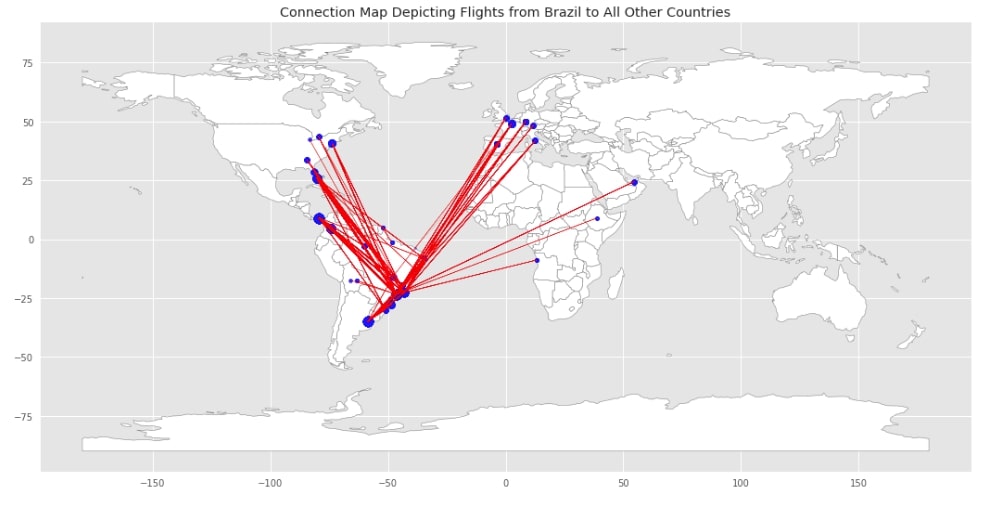 2.3 Connection Map Depicting Flights from Brazil to All Other Countries With Airport Locations as Scatter Plot [Destination Cities Labeled]. ¶

Our third connection map plot is exactly the same as our previous connection plot with added functionalities. We have added labels of city names where Brazilian flights are landing. We have not added labels of source cities as it'll make the graph look very cluttered. 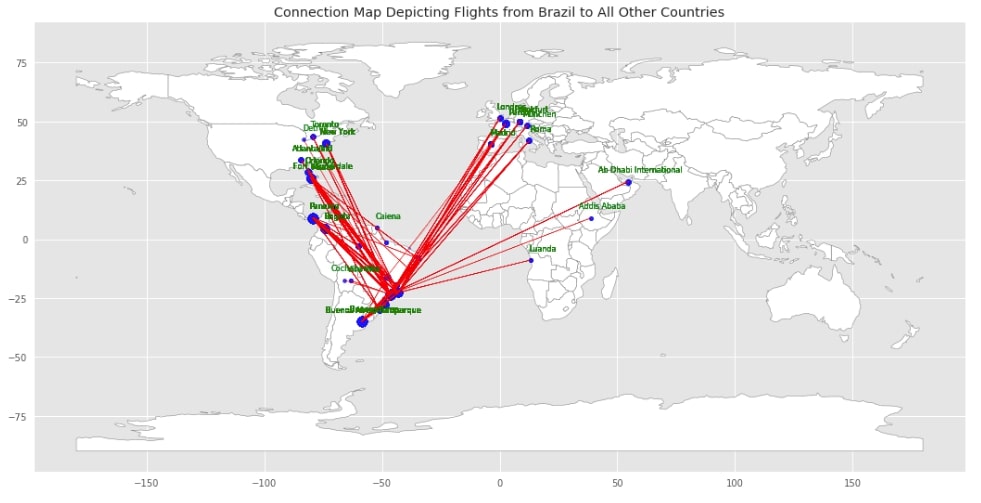 The fourth connection map that we'll be plotting using geopandas and matplotlib depicts flight travels between various cities of Brazil. We also have used a scatter plot to display various cities. 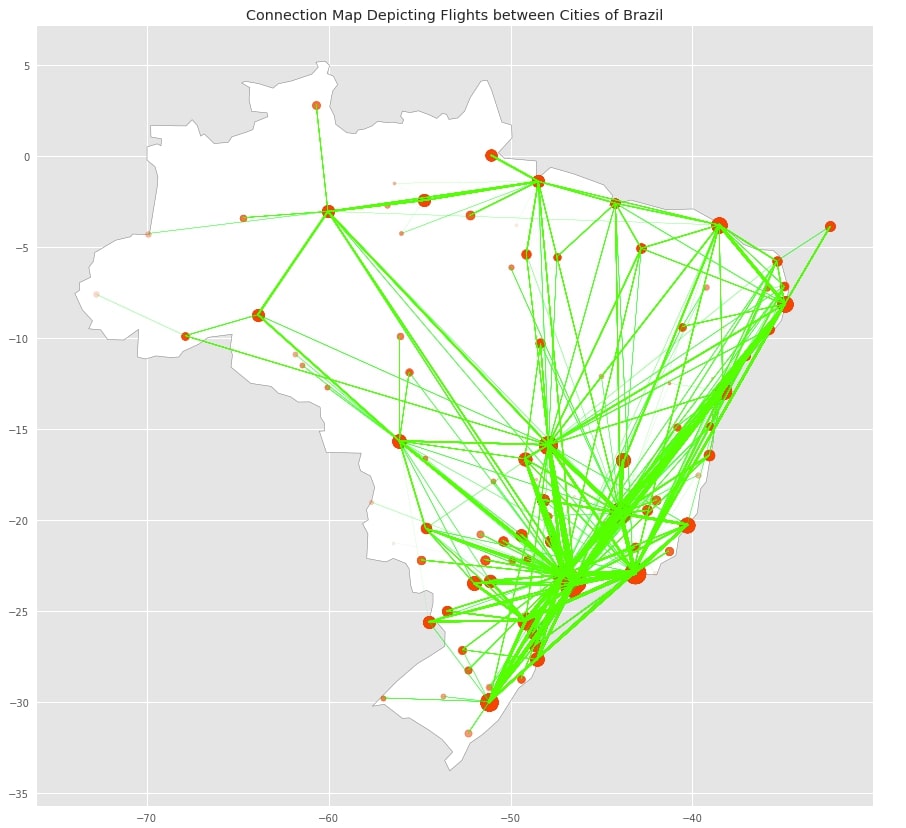 Our fifth connection map is exactly the same as the previous connection map but we also have added labels for each source and destination cities to map. 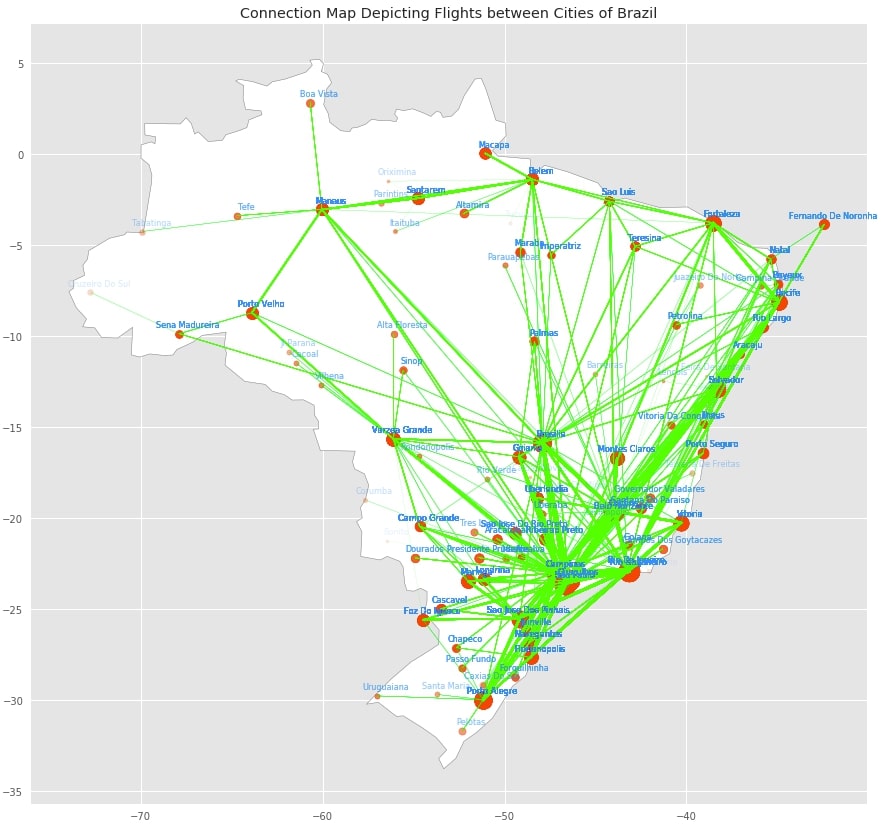 This ends our small tutorial explaining how to plot connection maps in python jupyter notebook using Plotly, Geopandas, and Matplotlib. Please feel free to let us know your views in the comments section.