The Choropleth map is one such representation of geospatial data. It can be used to analyze the distribution of data in geographical regions (e.g. population density, GDP per capita of countries, etc). Python has a list of libraries (geopandas, bokeh, cartopy, folium, ipyleaflet, etc.) that let us create choropleth maps. As a part of this tutorial, we'll introduce one new library named geoplot which is built on top of geopandas and cartopy. It let us create a choropleth map with just one line of code. We'll be using datasets from geopandas as well in our tutorial. As geoplot is built on top of geopandas and cartopy which itself are built on top of matplotlib, we can add details to charts using matplotlib as well.

If you don't have a background in geopandas and cartopy then please feel free to check our tutorials on them.

If you want to create scatter and bubble maps using geoplot then please check our other tutorial where we cover them.

We'll be creating choropleth maps using geoplot as a part of this tutorial. We'll try to explain the usage of geoplot API with simple examples.

We'll start by importing the necessary libraries. We have also printed the versions of the libraries that we are using.

Below we have imported geopandas library which we'll be using for loading geospatial datasets. We have printed the version of the library and the list of datasets available through it.

Below we have loaded the dataset with geospatial data about countries of the world. We can notice that geopandas dataframe has a column named geometry which holds information about the plotting shape of countries. We can merge this dataframe with other data frames and display other details for countries as well which we'll explain in our examples.

Below we have loaded the world happiness dataframe. It has information like the happiness score of countries, GDP per capita, social support, life expectancy, generosity, freedom, and perception of corruption. We'll be merging this dataframe with geo dataframe from geopandas which we loaded earlier so that we can plot information from this dataset on the world map.

The happiness dataset can be downloaded from the below link.

Below we have merged the geo dataframe which we loaded earlier with a happiness dataset based on the name of the countries. The final merged dataset will have columns from both datasets. We'll be using this dataset to create choropleth maps.

If we want to create simple maps without any information presented through them then we can use polyplot() method available from geoplot.

Below we have created a world map by giving world GeoDataFrame which we loaded earlier using geopandas. We have asked the chart to fill the color of each country with lightgrey color. 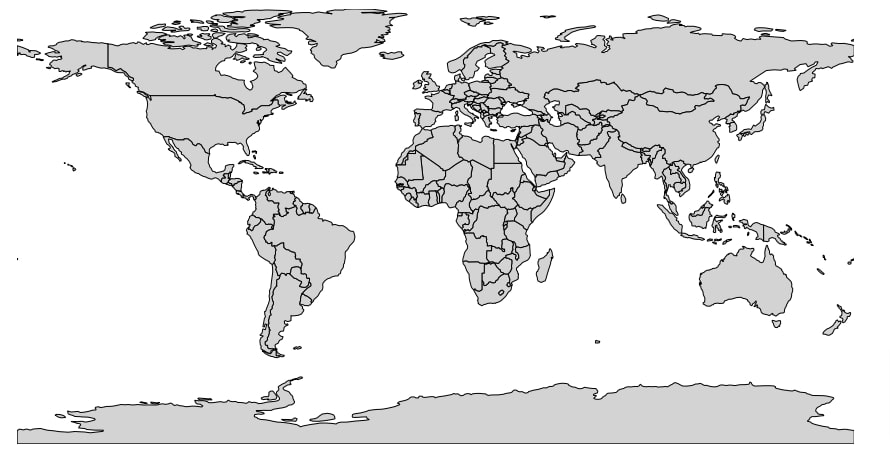 In this example, we have created a map of the US using polyplot() method. We have the first loaded dataset which has geospatial data of the US. We have loaded GeoJSON file as GeoDataFrame using geopandas. The link to the dataset is below.

We have then created the US map using GeoDataFrame. We have asked the method to fill polygons with dodgerblue color and the border color of the method is lightgrey. We have also used extent parameter specifying the bounding box of longitudes and latitudes for the US Map. 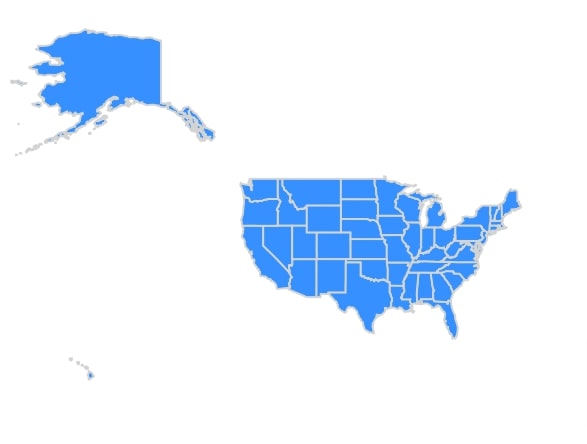 In this section, we'll introduce a method named choropleth() from geoplot which will let us create choropleth maps.

Below we have created our first choropleth map which highlights each continent using a different color. We have used world GeoDataFrame which we have loaded earlier to create a map. We have give hue parameter with column named continent from GeoDataFrame which is categorical column. We have instructed the method to use Pastel2 colormap for our purpose. 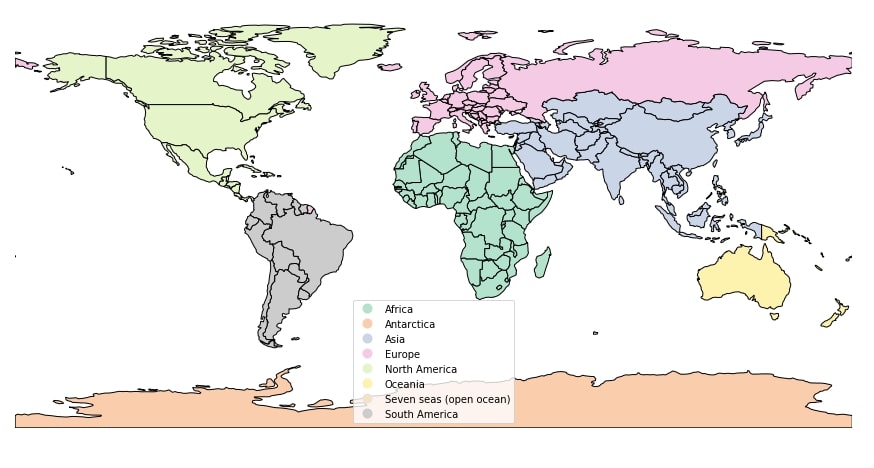 In this example, we have created a choropleth map using a continuous column of data. We have created a choropleth map showing the happiness scores of countries. We have used world happiness GeoDataFrame which we had created earlier by merging world GeoDataFrame with happiness pandas dataframe. We have instructed the method to use Score column of the dataframe to color polygons of the map. As Score is a continuous column, the map has created a color bar instead of showing categorical legend like the previous chart. 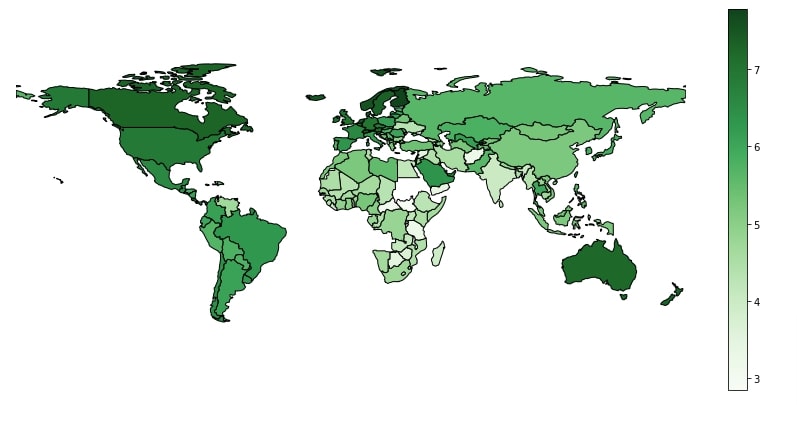 In this example, we have created another choropleth map showing healthy life expectancy across world countries. 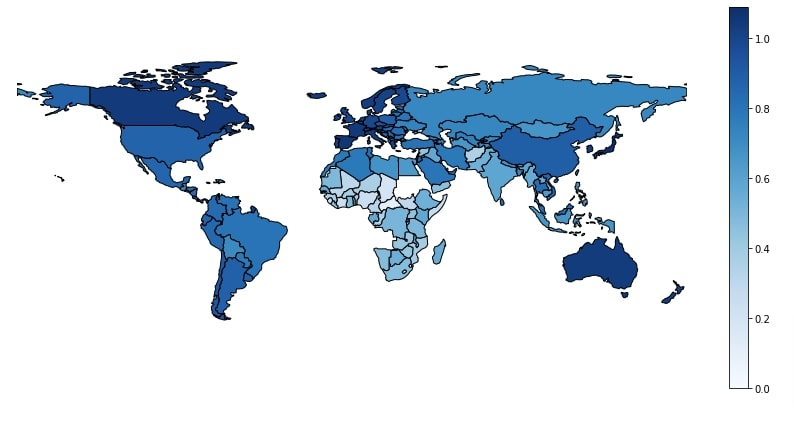 In this example, we have explained how we can categorize the continuous column of GeoDataFrame. We have again created a choropleth map of the happiness score of countries but we have treated the happiness score column as categorical by using scheme parameter of choropleth() method. We have given it an instance of EqualInterval() with parameter k set to 8 which will divided values of happiness score columns into 8 equal clusters. We can notice in map legend the range of values covered in each cluster. This can be useful in a situation where we want to give a name to values that fall in particular ranges.

In this section, we have created another choropleth map explaining how we can categorize continuous columns of data. This time we have created a choropleth map using the perception of corruption column of data. We have using Quantiles scheme to cluster values of perception of corruption columns into three clusters. We have given legend labels to three clusters as most corrupt, somewhat corrupt, and least corrupt. We have also given a dictionary to legend_kwargs parameter specifying how to modify the look of legend.

In this example, we'll be creating another choropleth map showing the US population in 2018 per us states. We have loaded the dataset which has information about states from the below link.

We have then merged us states GeoDataFrame with us population pandas dataframe to create merged dataframe which we'll use to create choropleth map.