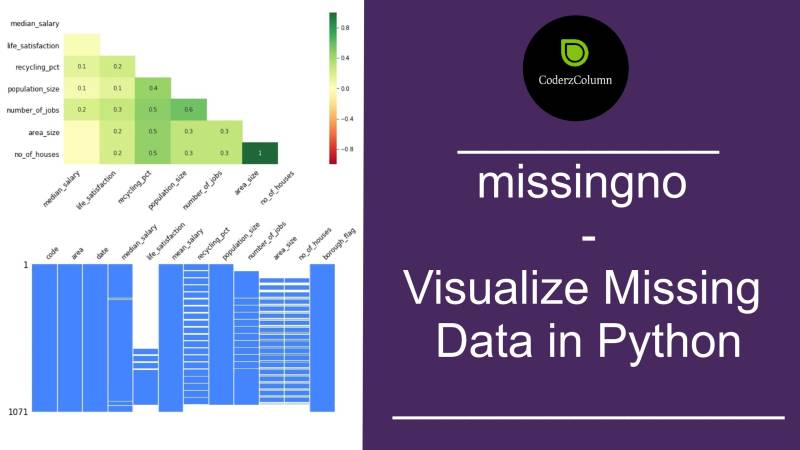 Python has a list of data visualization libraries for analyzing data from various perspectives. All of the data analysis tasks concentrate on the relationship between various attributes, distribution of attributes, etc. But many real-world datasets often has many missing values present in them. It might be due to many reasons like data not available, data lost in the process, etc. The missing data needs special handling before feeding it to machine learning algorithms as they can not handle missing data. We need a way to better understand the distribution of missing data as well in our datasets.

Python has a library named missingno which provides a few graphs that let us visualize missing data from a different perspective. This can help us a lot in the handling of missing data. The missingno library is based on matplotlib hence all graphs generated by it'll be static. We'll be explaining the usage of this library as a part of this tutorial.

missingno provides 4 plot as of now for the understanding distribution of missing data in our dataset:

This ends our small introduction to the library. Let’s get started with coding part without further delay.

We'll start loading our datasets that we'll be using as our dataset for analyzing the distribution of missing data first. We'll be loading below mentioned 2 datasets as pandas dataframe, to begin with.

Both of the datasets are available from kaggle. We suggest that you download datasets to follow along with our tutorial.

We'll now explain each graph type one by one with examples.

Below we are plotting count of values per columns ignoring missing values for London housing dataset with default settings of missingno. 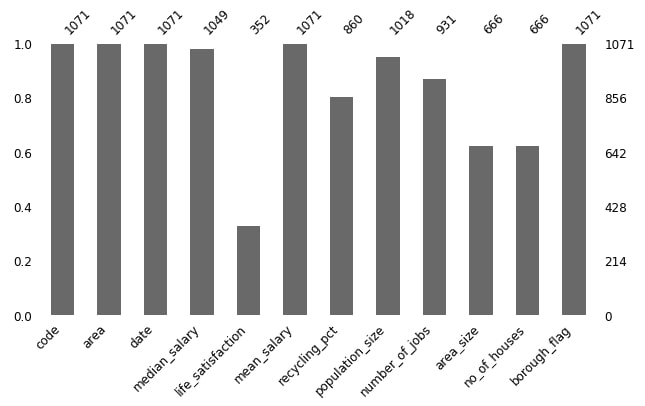 Below we are plotting count of values per columns ignoring missing values for the London housing dataset. We also have sorted columns based on missing values. 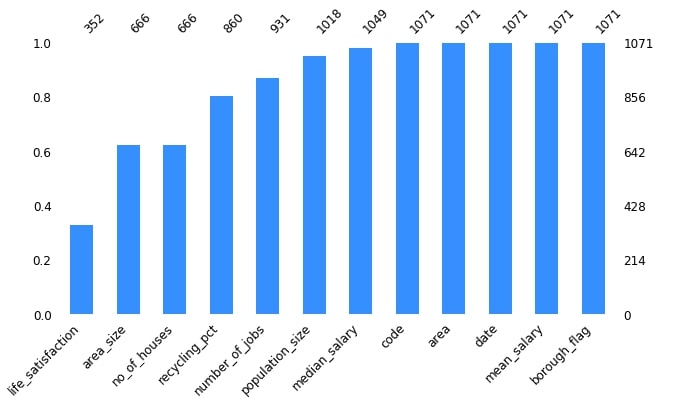 Below we are plotting count of values per columns ignoring missing values as well as a log of that counts for Starbucks locations dataset. We have combined both charts into one figure using a matplotlib axes configuration. We have changed bar color, figure size, and font size of the chart as well to improve graph aesthetics.

Below we are plotting the first matrix plot showing the distribution of missing values for Starbucks locations dataset. We can see that all columns except Postcode and Phone Number has data present into them. 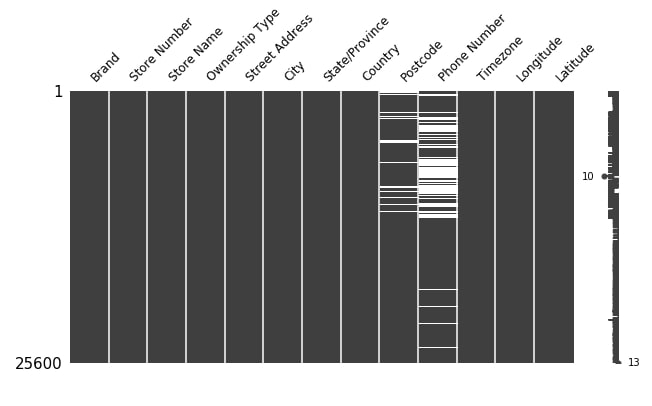 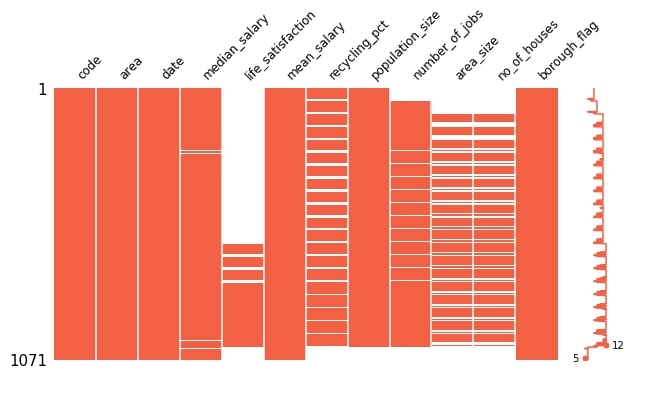 Below we are plotting the first matrix plot showing the distribution of missing values for Starbucks locations dataset but without sparkline. We also have changed the color of the plot along with figures size and font size of the chart. 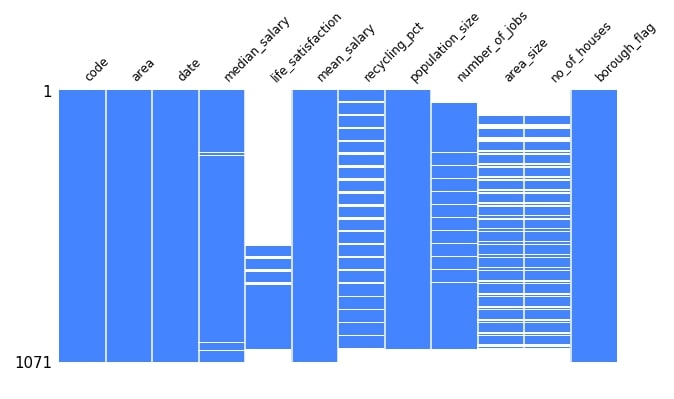 The nullity correlation ranges from -1 to 1.

We can see from the dataset that Longitude and Latitude has a correlation of 1.0 which highlights that if Longitude value is missing then Latitude value will be missing as well. There is little correlation between Postcode and Phone Number as well which we had noticed above when visualizing matrix chart. 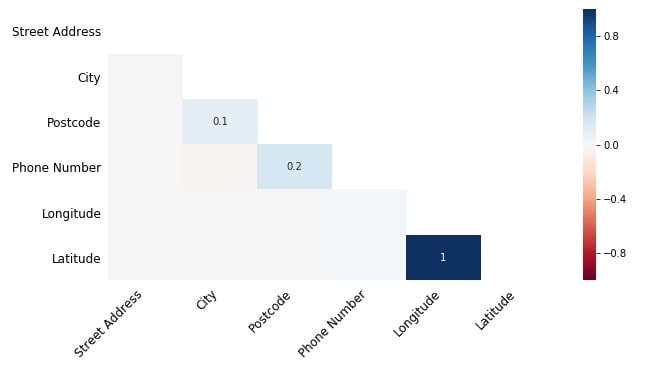 Below we are plotting Heatmap showing nullity correlation between various columns of London housing dataset. We have made changes to graph colormap, figure size, and font size as well this time. 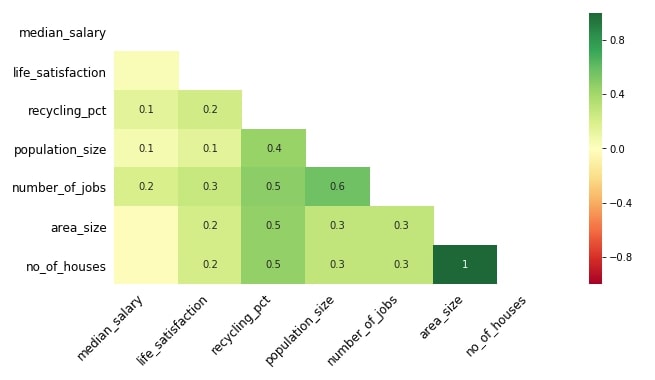 Below we are plotting dendrogram which shows hierarchical cluster creation based on missing values correlation between various datasets. The columns of the dataset which have a deep connection in missing values between them will be kept in the same cluster.

The dendrogram displays clusters with a tree-like structure that displays hierarchy of clusters.

The dendrogram method uses scipy.hierarchy module for the creation of clusters based on data. It uses the average method of that module by default to create clusters. We can also pass other methods present in that scipy module like ward, centroid, etc for creating clusters. 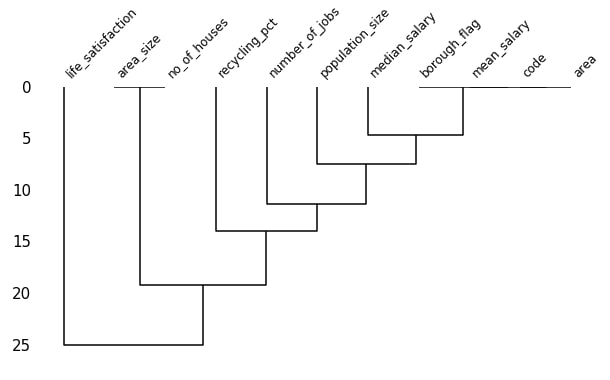 Below we are plotting dendrogram of London housing and Starbucks locations datasets. We have used different methods for creating clusters this time. We have used a centroid method for creating clusters of columns for the Starbucks locations dataset and the ward method for the London housing dataset. We suggest that you try various clustering algorithms available from scipy using this link.

We can notice from the below graph that Longitude and Latitude are kept in one cluster. We had noticed in the above heatmap as well that they had a nullity correlation of 1.0. We can notice that State/Province, Ownership Type, Store Number, Brand, Store Name, Time Zone, and Country are kept together because they don't have any missing value.

This ends our small tutorial on explaining the usage of missingno library for plotting various visualization to understand the distribution of missing data in our datasets. Please feel free to let us know your views in the comments section.

Please feel free to let us know in the comments section below (Guest Comments are allowed). We appreciate and value your feedbacks.
Published On : May-09,2020 Time Investment : ~20 mins