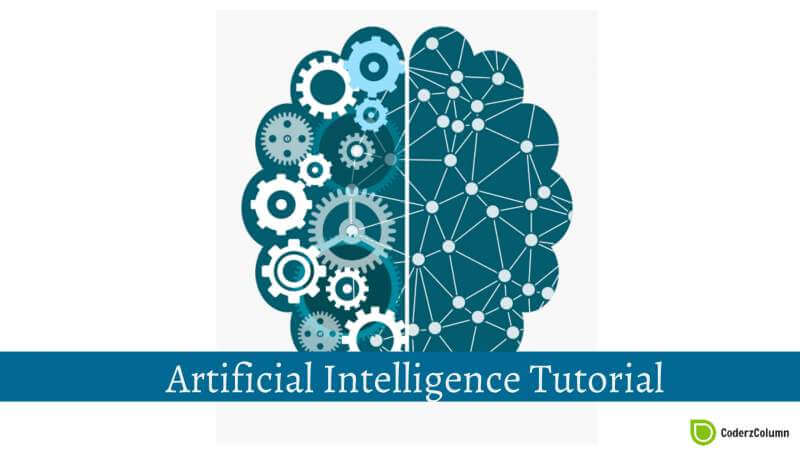 Text data is a type of data that has a sequence in it. We need to follow the grammar of the language in order to create sentences and it requires a sequence of words to appear in a particular sequence. Due to this, when we are trying to solve any NLP task using neural networks, it is preferable that we design a network that can capture the sequence of text. This kind of network that can capture sequences gives the best results. The commonly used deep neural networks which consist of only dense/linear layers are not good at this. Recurrent neural networks are the ones that are specifically designed for this purpose and do a very good job at capturing a sequence of data. But some research has shown that we can use convolutional neural networks with 1D convolution layers as well for NLP tasks and it can give good results as well. Hence, we'll be concentrating on them in this tutorial.

As a part of this tutorial, we have explained how we can create CNNs consisting of 1D Convolution (Conv1D) layers using MXNet for solving text classification tasks. MXNet is a python deep learning library for creating neural networks designed by Apache. We'll be using word embeddings approach to encoding text data to real-valued data as required by networks. We have also evaluated the performance of CNNs by calculating various ML metrics and also explained predictions made by them using LIME algorithms to better understand them.

Below, we have listed essential sections of tutorial to give an overview of the material covered.

Below, we have imported the necessary Python libraries that we have used in this tutorial and printed the version of them.

In this section, we are preparing our dataset so that it can be given to a neural network for training. We are going to use word embeddings approach to encoding text data. In order to encode data using this approach, we'll be following the below steps.

The first two steps will be completed in this section. The third step will be implemented in the neural network as an embedding layer which will be responsible for retrieving embeddings (real-valued vectors) for indexes.

Below, we have included a sample image showing the word embeddings concept. 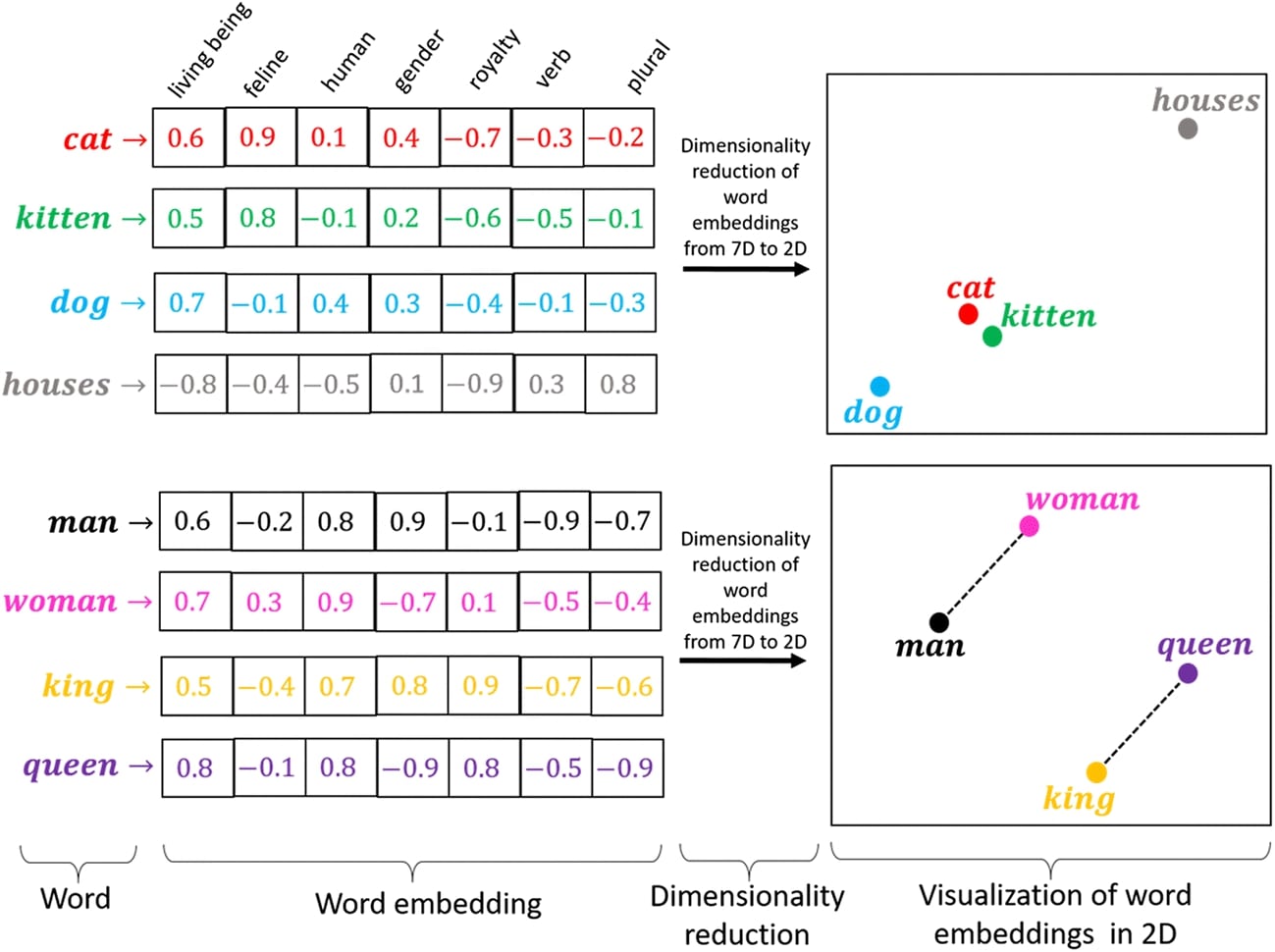 In this section, we have loaded the dataset that we are going to use for our text classification task. We have loaded AG NEWS dataset available from torchtext. The dataset has text documents for 4 different news categories (["World", "Sports", "Business", "Sci/Tech"]). The dataset is already divided into train and test sets. After loading them as normal arrays, we have wrapped them in ArrayDataset which is a commonly used wrapper in MXNet to maintain datasets.

In this section, we have built a vocabulary of all unique tokens from our datasets. In order to build vocabulary, we need to provide a dictionary with all tokens and their respective frequencies in the dataset to Vocab() constructor available from gluonnlp. To create a dictionary of all tokens, we have first initialized Counter object from Python collections library. Then, we have looped through all text examples of datasets one by one calling count_tokens() method. We have provided the method with a list of tokens of text example and Counter object. The method updates tokens of text example in Counter object if they are not present there already.

Once, we loop through all text examples of the dataset, we have the Counter object ready with all unique tokens and their frequencies. We can then give this object to Vocab() constructor to create a vocabulary. We have printed the number of tokens of vocabulary as well at the end.

In this section, we have defined the vectorization function which will be used by the data loaders we are going to create in the next section to map text documents to their respective token indexes using vocabulary.

We have also explained how the function will work with one simple example.

In this section, we have simply defined data loaders (train and test) using datasets. These data loaders will be used during the training process to loop through data in batches. The batch size is kept at 1024 text examples per batch. We have also provided the vectorization function defined in the previous section to batchify_fn parameter which will be applied to each batch of data.

In this section, we have defined the network that we'll be using for our text classification task. The network consists of 3 layers.

The second layer of network is 1D convolution (Conv1D) layer. The layer is created with 32 output channels and kernel size of 7. This layer will translate input of shape (batch_size, embed_len, max_tokens) to (batch_size, conv_out_channels, max_tokens) = (batch_size, 32, 50). After applying convolution operation, it also applies relu activation to it.

After defining the network, we initialized it and performed a forward pass through it using random data for verification purposes. We have also printed the summary of network layers and their parameter count.

Please make a NOTE that we have not covered details of network creation in-depth. If you are someone new to MXNet library and want to learn how to create networks using it then we recommend that you go through the below links. They will help you get started designing neural networks using MXNet.

In this section, we are training the network we defined earlier. To train the network, we have defined a function. The function takes a trained object (network parameters), train data loader, validation data loader, and a number of epochs as input. It then executes a training loop number of epochs time. During each epoch, it loops through whole training data in batches using a train data loader. For each epoch, the function performs a forward pass to make predictions, calculates loss, calculates gradients, and updates network parameters. The function records loss for each batch and prints the average loss per epoch at the end of an epoch. We have also created a helper function for calculating validation accuracy and loss values.

Below, we have actually trained our network using the training function defined in the previous cell. We have initialized a number of epochs to 15 and the learning rate to 0.001. Then, we have initialized the text classifier, cross entropy loss, Adam optimizer, and Trainer object. At last, we have called our training routine with the necessary parameters to perform training. We can notice from the loss and accuracy values getting printed after each epoch that our network is doing a good job.

In this section, we have evaluated the performance of our trained network by calculating accuracy score, classification report and confusion matrix metrics on test predictions. We can notice from the accuracy score that our model is doing a good job at the text classification task, though it can be improved further. We have calculated all metrics using functions available from scikit-learn.

If you want to learn about various ML metrics available from sklearn then please check the below link which covers the majority of them in detail.

Apart from metrics calculation, we have also plotted the confusion matrix. From the plot, we can notice that our model is doing quite a good job at classifying text documents in Sports category compared to other target categories.

We have created a confusion matrix plot using Python library scikit-plot. It provides a charting facility for many ML metrics. Please feel free to check the below link if you want to learn about it. 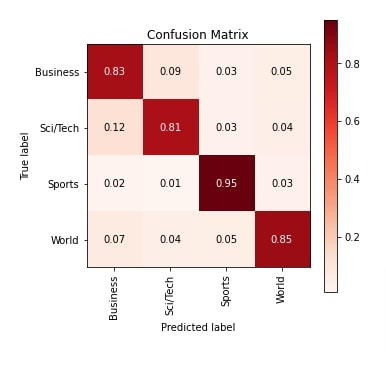 In this section, we have tried to explain network predictions using LIME algorithm. The python library lime provides an implementation of an algorithm. It let us create a visualization that highlights important words in the text document that contribute to predicting a particular target label.

If you are new to the concept of LIME and want to learn about it in depth then we recommend that you go through the below links in your free time as it'll help you enhance your knowledge of it.

Below, we have first retrieved test examples from the test dataset.

Below, we have first created an instance of LimeTextExplainer object. This object will be used later to create an explanation object explaining prediction.

Then, we have created a prediction function that takes a batch of text examples as input and returns their probabilities.

After defining a function, we randomly selected a text example from the test dataset and predicted its target label using our trained network. Our network correctly predicts the target label as Sci/Tech for the selected text example. Next, we'll create an explanation and visualization for this text example.

Below, we have first created an Explanation object by calling explain_instance() method on LimeTextExplainer object. We have provided selected a text example, a prediction function, and a target label. The explanation object has details about words contributing to prediction. Then, we have visualized the explanation object by calling show_in_notebook() method on it. We can notice from the visualization that words like 'software', 'technology', 'devices', 'wireless', 'management', 'departments', 'conference', etc are contributing to predicting target label as Sci/Tech. 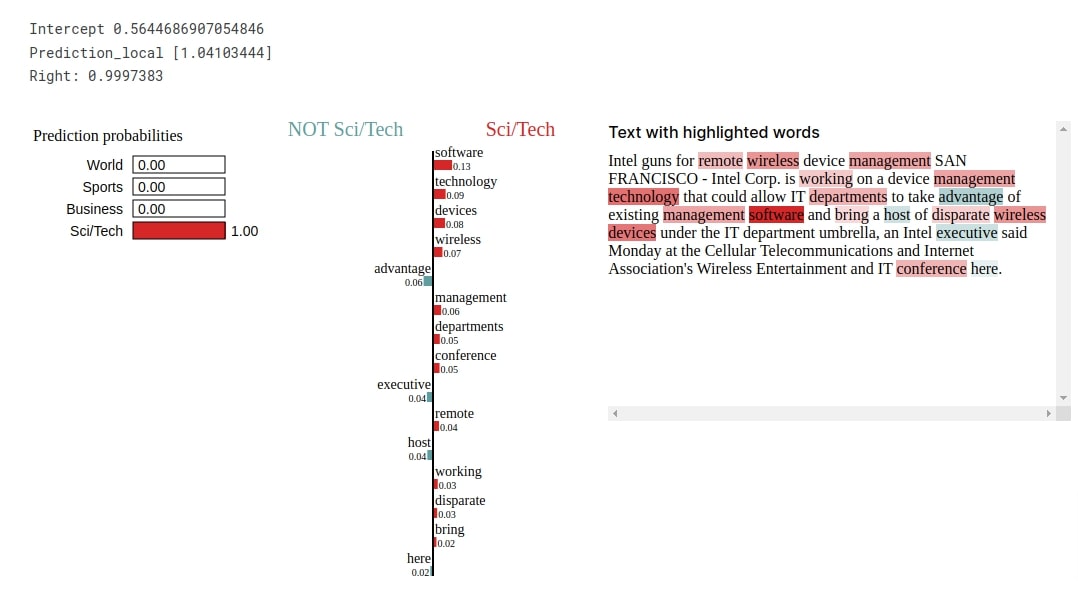 Below, we have trained our network using exactly the same settings that we had used earlier. We can notice from the loss and accuracy values getting printed after each epoch that our network is doing a good job at the text classification task.

In this section, we have evaluated the performance of our trained network by calculating accuracy score, classification report and confusion matrix metrics on test predictions. We can notice from the accuracy score that it's a little less compared to our previous epoch which is surprising as we had expected more accuracy by lining more convolution layers. We have also plotted the confusion matrix for reference purposes. 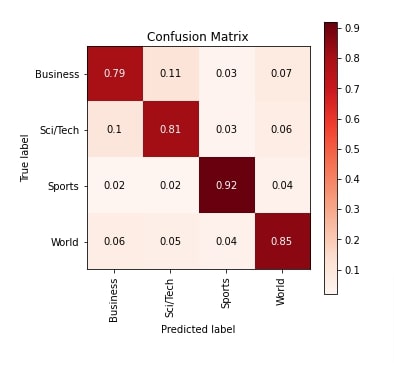 In this section, we have tried to explain predictions made by the trained network using LIME algorithm. The network correctly predicts the target label as Sci/Tech for the selected text example from the test dataset. The visualization highlights that words like 'software', 'intel', 'department', 'devices', 'technology', 'conference', 'remote', etc are used for predicting target label as Sci/Tech. 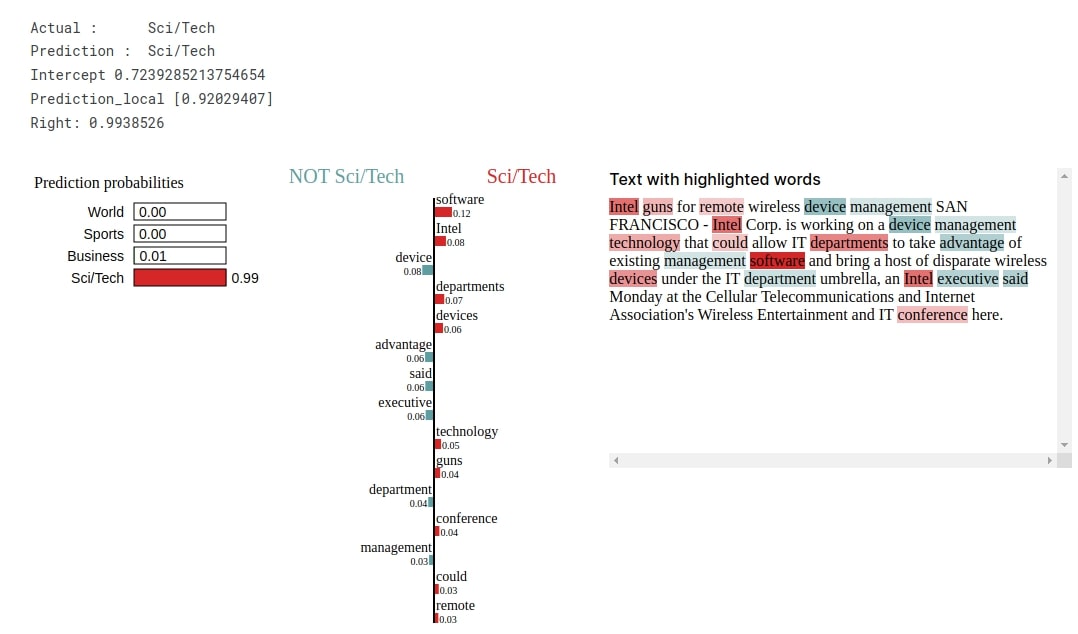 This ends our small tutorial explaining how we can create CNNs with 1D convolution layers for text classification tasks using Python deep learning library MXNet. Please feel free to let us know your views in the comments section.

Please feel free to let us know in the comments section below (Guest Comments are allowed). We appreciate and value your feedbacks. If you like our work please give a thumbs-up to our article in the comments section below. You can also support us with a small contribution by clicking on Support Us link in the footer section.
Published On : May-01,2022 Time Investment : ~30 mins