We'll be using below mentioned three datasets for our purpose of explaining classification metrics visualizations which are easily available from sklearn:

Below we have loaded all datasets one by one and printed their descriptions explaining features of data. We have also kept datasets into pandas dataframe and displayed the first few data samples.

We have now split all three datasets mentioned above into train (80%) and test (20%) sets using the train_test_split() method of sklearn. We'll be using these train/test sets for training models and evaluating performance.

The show method has a parameter named output_path where we can path and image name if we want to store image to disk. 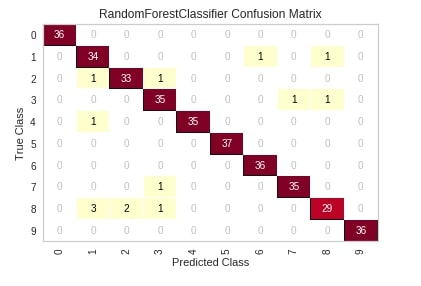 Below we have created another example explaining the usage of the confusion matrix. We have also modified a few important parameters of the ConfusionMatrix. 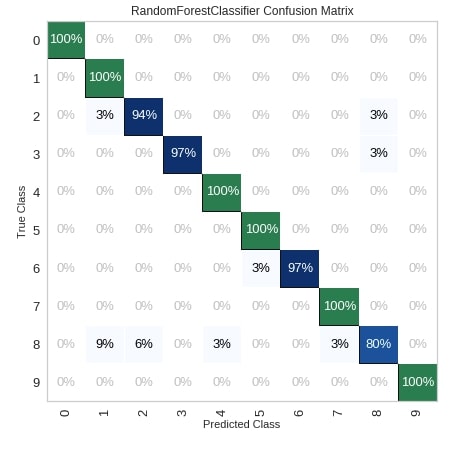 The yellowbrick also provides another way of creating a chart by using methods if we don't want to create a class object. Below we have created a confusion matrix by using the confusion_matrix() method available.

Please make a note that we have passed the sklearn estimator, train data, test data, and few other parameters to the method. The passing of test data is optional. If we don't pass test data then it'll create a matrix based on train data.

The second chart type that we'll explain using yellowbrick is a classification report which shows precision, recall, support, and f1-score for each individual class of classification problem.

We'll be following the same process to create a visualization that we followed in the previous example. We'll first create an object of class ClassificationReport passing it sklearn estimator and list of class names. We'll then fit that object with train data and evaluate using test data. We'll then call the show() method to generate the figure. We have generated a classification report of digits test data and used a sklearn decision tree estimator for training data. 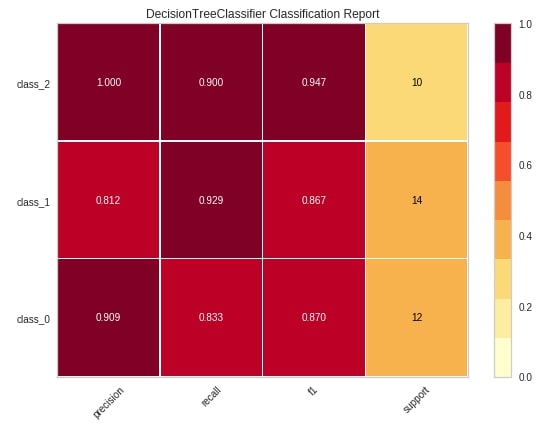 Below we have explained another way of creating a classification report chart using the classification_report() method of yellowbrick. 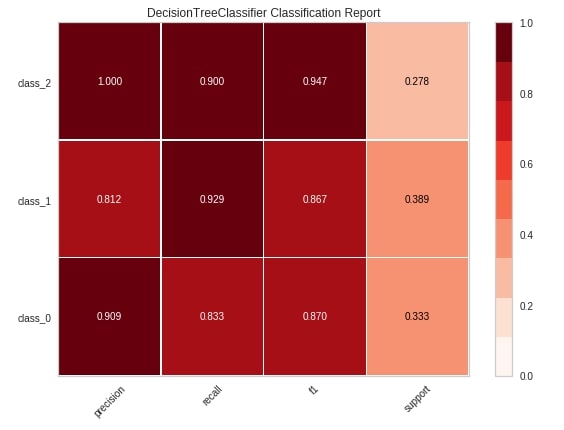 The third chart type that we'll explain is the ROC AUC curve chart. We have followed the same step of creating a chart as earlier examples. We have first created an object of class ROCAUC passing it sklearn decision tree estimator, fir object to train data, evaluated it on test data and plotted figure of test data by calling show() method.

Below are some important parameters of the ROCAUC class: 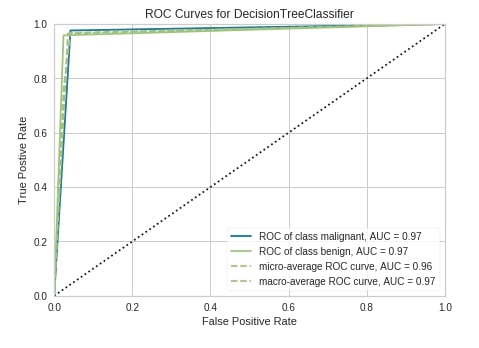 Below we have created the ROC AUC curve using the roc_auc() method of yellowbrick. 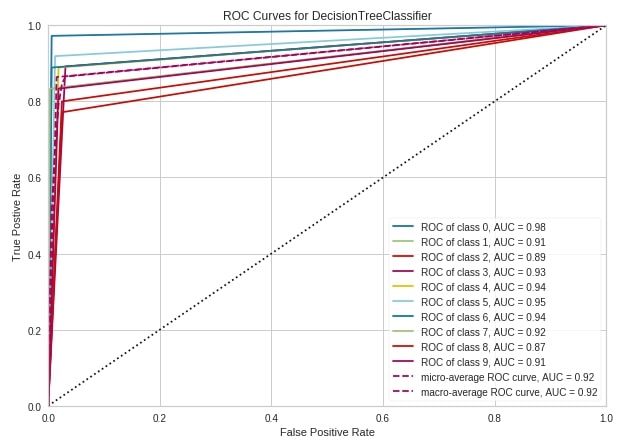 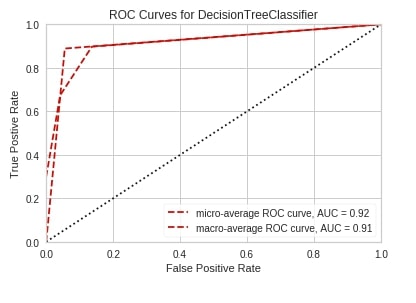 The fourth chart type that we'll explain is precision-recall curves. We have followed the same process as previous examples to create this chart. We have created an object of class PrecisionRecallCurve with a sklearn decision tree estimator, the trained object on breast cancer train data, and evaluated it on test data. We have then called the show() method to display the chart.

Below is a list of some important parameters of class PrecisionRecallCurve: 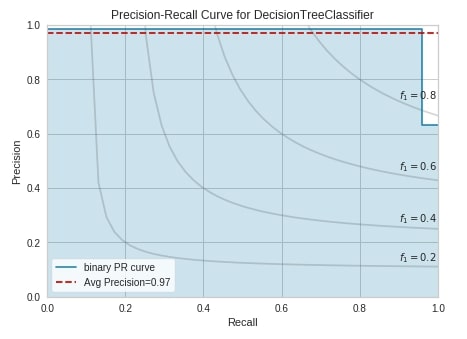 Below we have created a precision-recall curve using the precision_recall_curve() method of yellowbrick on digits test data. 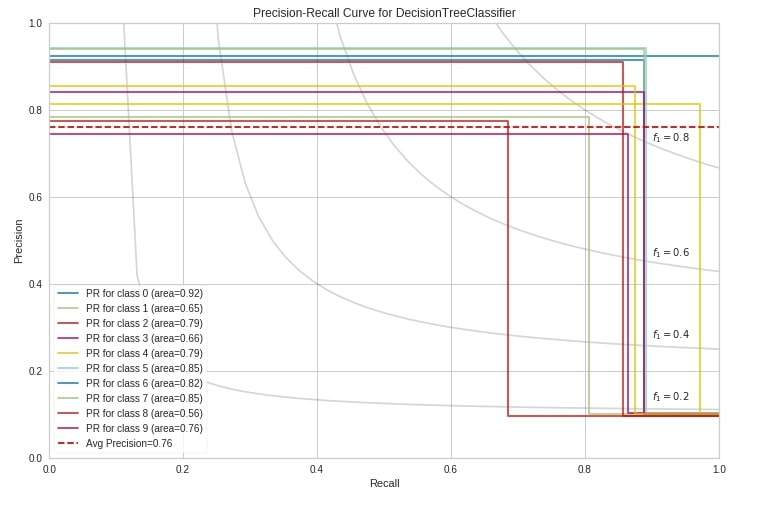 The fifth chart type that we'll introduce is the discrimination threshold. It displays how precision, recall, f1 score, and queue rate change as we change the threshold at which we decide class prediction. The output of the machine learning model for classification problems is generally probability and we decide class based on some threshold on probability. The sklearn has put the threshold generally at 0.5 which means that if the probability is greater than 0.5 then we take the class as positive class else negative class.

Below we have created a discrimination threshold chart by creating an object of class DiscriminationThreshold passing it sklearn logistic regression estimator. We have then fitted object on breast cancer train data and evaluated it on test data before generating a chart. 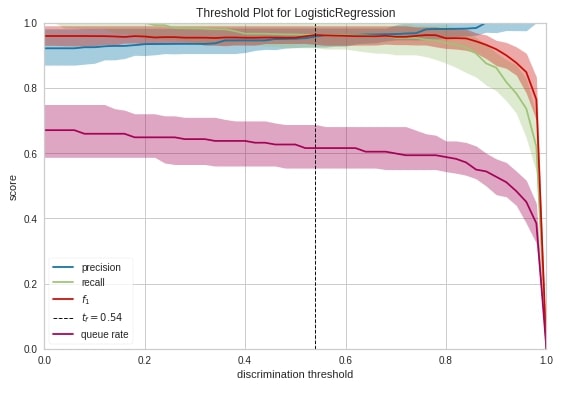 The sixth and last chart type that we'll introduce for classification metrics visualizations is class prediction error. It’s a bar chart showing how many samples are correctly classified and how many wrongly along with a class in which they were wrongly classified. 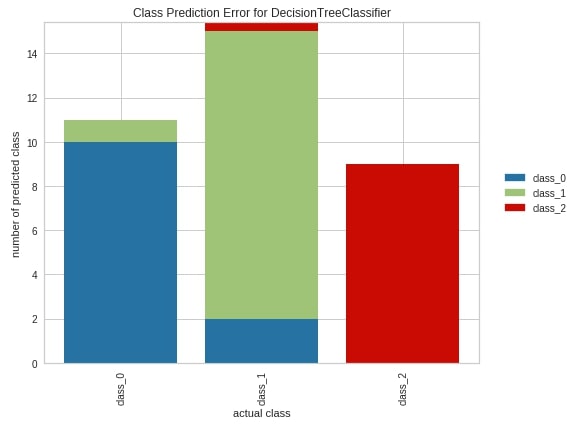 As a part of this section, we'll be explaining various regression metrics visualizations. We'll be loading different datasets and using different sklearn regression estimators for this.

We'll be using below mentioned two datasets which are easily available from scikit-learn for the creation of various regression metrics visualizations:

Below we have loaded all datasets one by one and printed their descriptions explaining features of data. We have also kept datasets into pandas dataframe and displayed the first few data samples.

Below we have split both datasets loaded earlier into the train (80%) and test (20%) sets.

The first chart type that we'll introduce for explaining regression metrics visualizations is the residual plot. The residual plots show a scatter plot between the predicted value on x-axis and residual on the y-axis. It points that if points are randomly distributed across the horizontal axis then it’s advisable to choose linear regression for it else a non-linear model will be an appropriate choice.

We have followed the same process as previous examples to create this chart. We have created an object of class ResidualsPlot, fitted it on Boston housing train data, and evaluated it on test data. 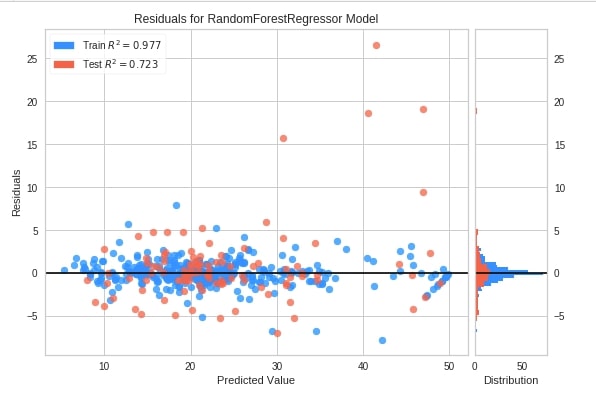 Below we have created a residuals plot using the residuals_plot() method on California housing data. We have used a sklearn random forest regressor this time. 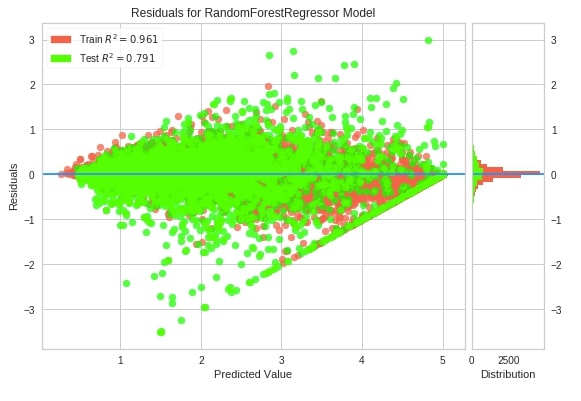 The second chart type that we'll introduce is the prediction error plot which is a scatter plot of actual target values on the x-axis and model predicted values on the y-axis.

We have created a chart by first creating an object of class PredictionError. We have then fitted Boston train data and evaluated test data. The chart also has boolean parameters named bestfit and identity which specifies whether to include the best fit line and identity line in the chart or not. 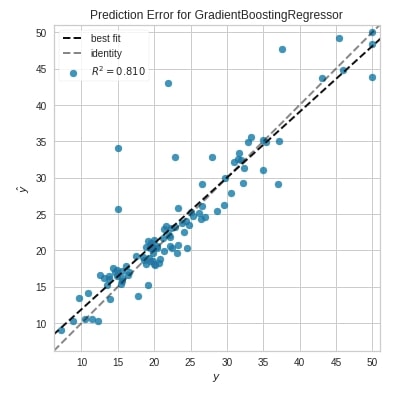 Below we have created a prediction error plot using the prediction_error() method. 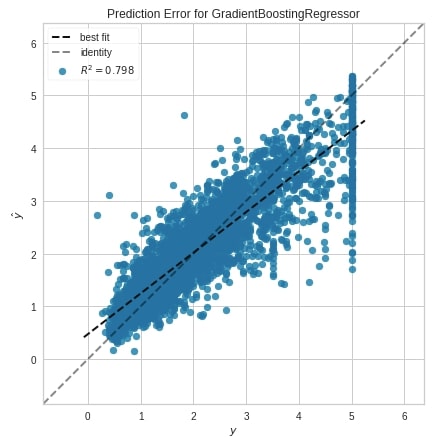 The third chart type that we'll explain for regression tasks is the alpha selection chart which demonstrates how different values of alpha influence model selection during regularization. It shows the impact of regularization on the model. This will work on RegressionCV models of sklearn which are RidgeCV and LassoCV. We can try different alpha values.

We have created a chart by using an object of class AlphaSelection using the same process as previous examples. 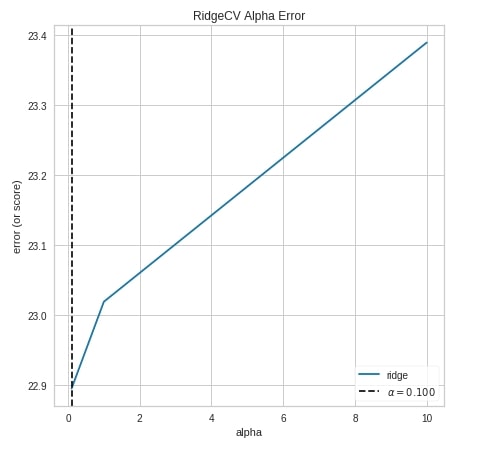 Below we have created the alpha selection chart using the alphas() method of yellowbrick. 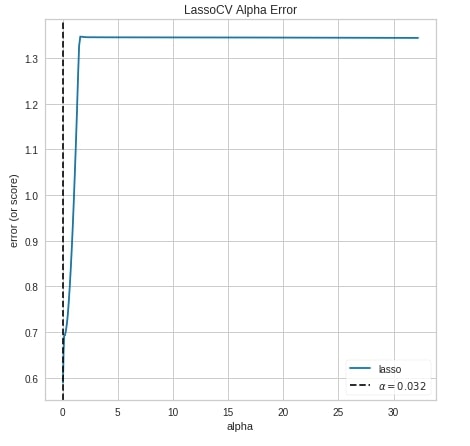 The fourth and last chart type that we'll introduce is the cook's distance chart which displays the importance of individual features on the model. The removal of high influential samples from data might change model coefficients hence performance. Its generally used to detect outliers that can influence the model in a particular direction with the presence of just a few samples. 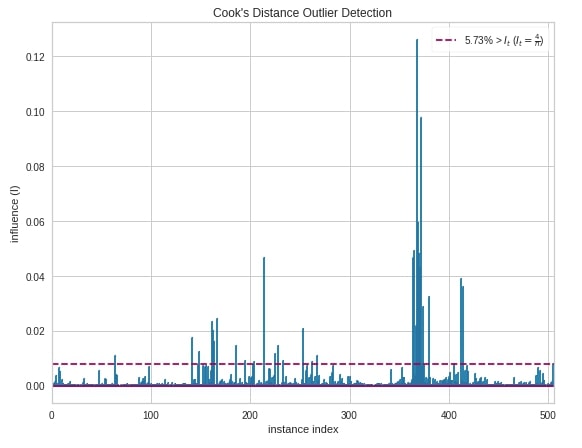 Below we have created a cook's distance chart using the cooks_distance() method of yellowbrick. 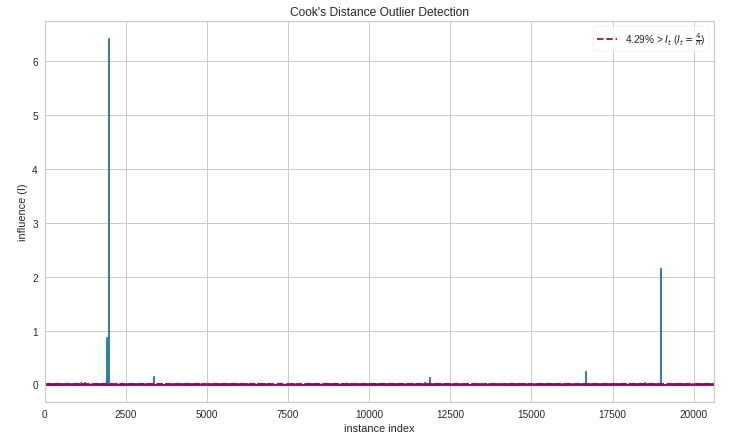 This ends our small tutorial explaining classification and regression metrics visualizations available with yellowbrick. Please feel free to let us know your views in the comments section.