The interpret-text has three main classes that currently provide explainer instance which will be used to generate an explanation for predictions.

The process of generating an explanation using interpret-text is like many other interpretation libraries which starts with the creation of an explainer object and then using that object to create an explanation for individual samples. The same approach is followed by interpret-ml as well.

If you are interested in learning about interpret-ml then please feel free to check our tutorial on the same (link is given in References section at last as well with other useful tutorials on the same topic).

Please make a note that as interpret-text is currently in alpha release, all modules are kept in a module named experimental.

We'll start by importing the necessary libraries which will be used through the tutorial.

The dataset that we'll use as a part of this tutorial is a UCI mail dataset which has around 5k+ emails and their labels (spam/ham). We'll be training different models on this dataset by transforming data to predict whether mail is spam or not.

We'll start by downloading and unzipping the dataset. We have then included simple logic that loads individual mail and its label.

As a part of our first example, we'll not be training any model of our own but we'll use the default model which ClassicalTextExplainer uses if we don't provide is model upfront.

In the beginning, we have divided data into train and text sets by using sklearn data splitting utility.

Below is a list of important parameters of ClassicalTextExplainer which can help us to use it according to our needs.

We have below created a ClassicalTextExplainer instance without giving any parameter which will use LogisticRegression from sklearn as a classifier. We have then called the fit() method passing it

Below, we have created a sklearn LabelEncoder instance which will be used to transform a list of labels (spam/ham) from string to a list of integers by assigning integers to each label (0-ham, 1-spam). This is needed by ClassicalTextExplainer as it does not take as an input list of string labels.

We have now fitted explainer instance with train data. It returns classifier instance and best params after trying a few parameter sequences by itself. We can see from the below results that it returns the sklearn Pipeline instance which has two components. The first estimator is interpret-ml internal encoded which transforms text data to floats and the second estimator is sklearn LogisticRegression which will be fitted on train data.

Below we have assigned our label encoder created earlier to the labelEncoder property of preprocessor of explainer. This is needed in the future by explainer instance hence added from future failures.

Below we have taken a random text sample from the test dataset. We have then called the explain_local() method on our explainer instance passing it actual text sample and predicted label for that sample. It'll then generate an explanation instance which will be used to explain that prediction of the model.

The ExplanationDashboard class from the widget module accepts the explanation instance created from the previous step and generates a dashboard out of it explaining prediction.

Below we can see that dashboard is explaining prediction with weights contributed by words of that text. It also shows which labels contributed positively and which contributed negatively. It even shows original text with words highlighted according to their contribution. We can even change the slider showing the number of important words that we want to see.

Below we have created a dashboard with another example where we are showing prediction which went wrong by our model. This can give us even more insights. 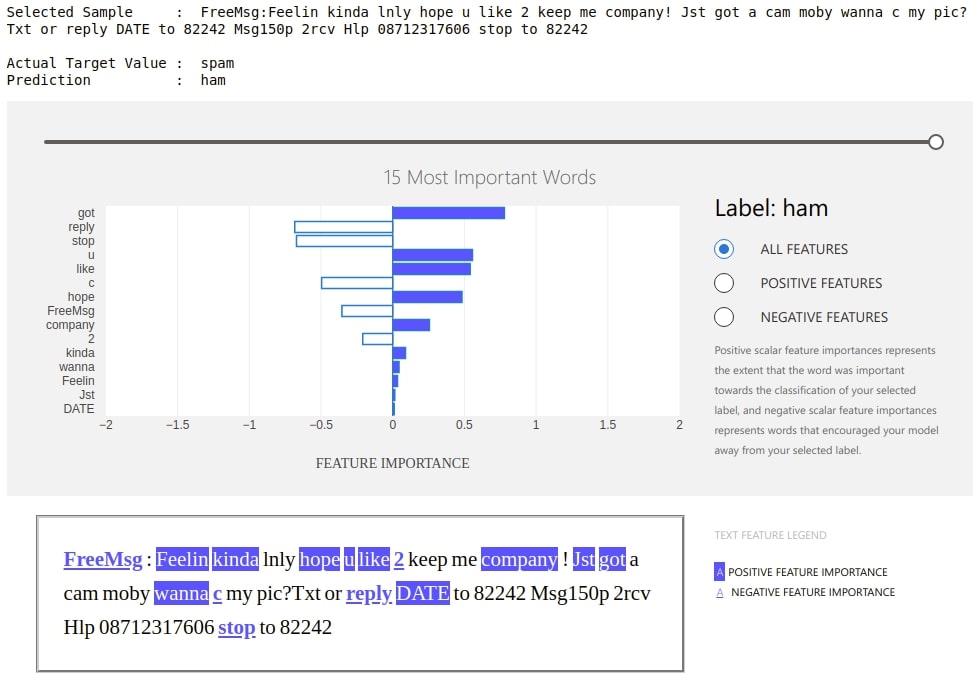 As a part of our second example, we'll explain how to generate an explanation using a tree-based model which we have already trained using sklearn. We have first transformed text data into the floating matrix using the Tf-IDF vectorizer. We have then divided data into train and test sets. After dividing data, we have fitted train data to random forest classier and printed a few classification metrics on test data.

If you do not have a background on feature extraction from text data that we have performed below and is interested in learning about it then please feel free to check our tutorial on the same.

Below we have created BOWEncoder which will be used to encode text data.

Below we have created LabelEncoder like earlier. We have also assigned our encoder and TF-IDF vectorizer instances to bow encoder properties.

We have now created our instance of ClassicalTextExplainer using bow encoder as a preprocessor and random forest classifier as a model. We have also set is_trained to False because our model is already trained and we don't need to train again.

Below we have taken a random sample from test data and generated an explanation for it using the explain_local() method. 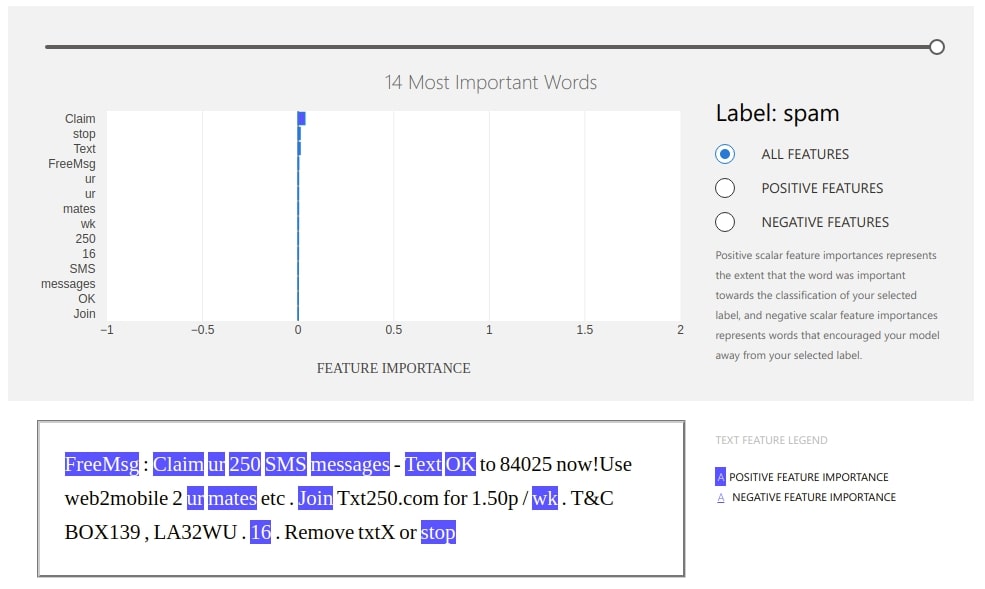 Below is another example of an explanation where our model is making mistake. 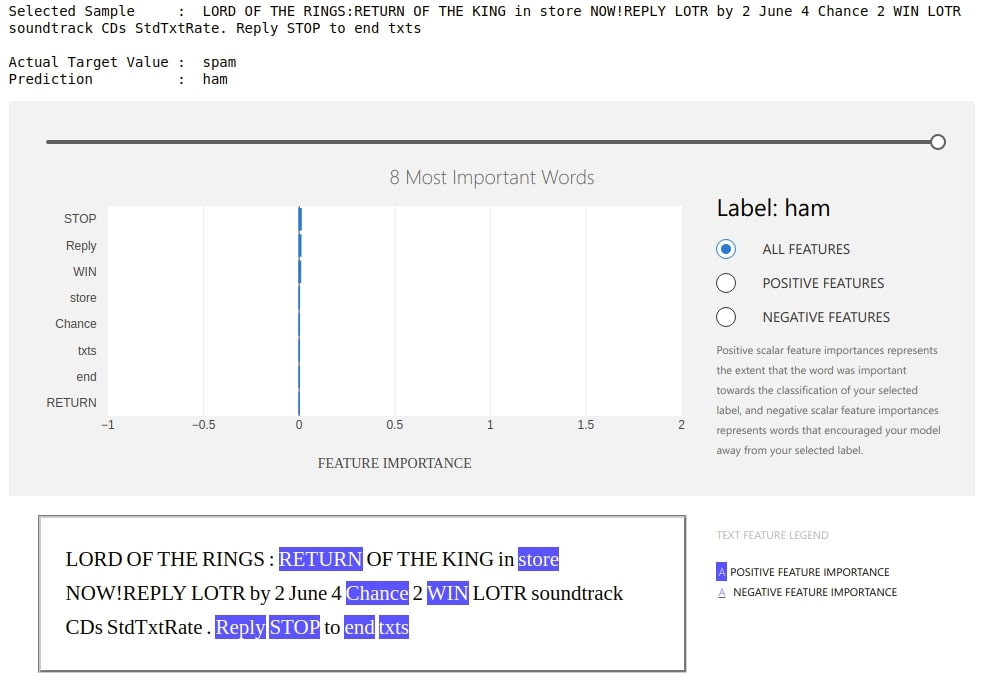 As a part of our third example, we'll explain how we can generate explanations from the untrained tree-based model. The majority of steps will be almost the same as the previous example with one minor change.

We'll start by creating a TF-IDF vectorizer and transform text data to float. We have then divided data into train and test sets.

Below we have created a bow encoder as earlier and have set label encoder and TF-IDF vectorizer on it.

As a part of this example, we have used the GradientBoostingClassifier as our model. We have also passed a dictionary with a list of max depths that we want to try to hyperparam_range parameter of ClassicalTextExplainer. We have also set is_trained to False this time because we'll be training it next.

As our model is untrained, we have to call the fit() method on explainer instance to train it with train data. As earlier, it'll return the classifier and best params.

We have now generated a dashboard from a random test sample below. The code is almost the same as previous examples. 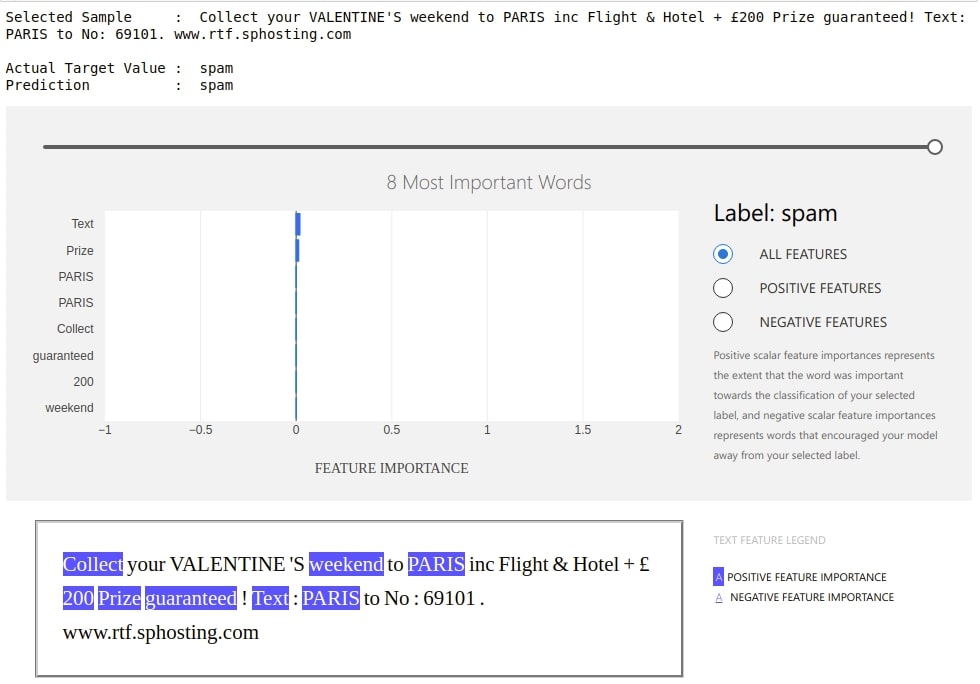 Below is another example where our model is making mistake. 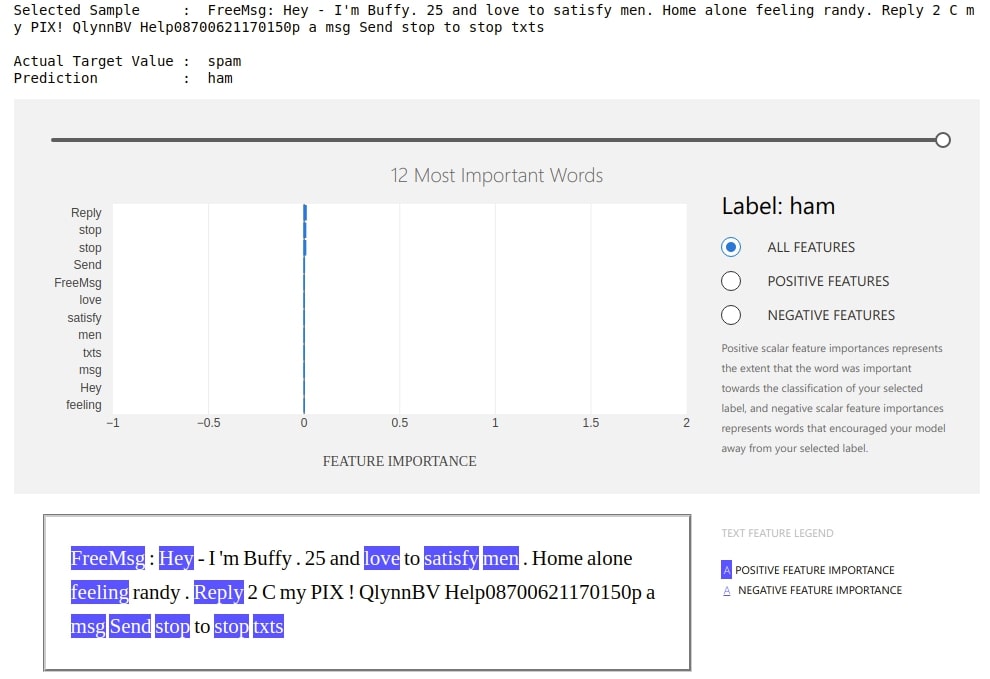 The below code is exactly the same code as that used in example 2. We have transformed data using the TF-IDF vectorizer, trained a random forest classifier on train data, and generated a few classification metrics on test data.

Below we have generated feature contribution of the random test sample using treeinterpreter. We'll be using it to generate an explanation in the next step.

Please make a note that this method has one drawback that it can't generate the text part of the dashboard properly because we have lost sequence when transforming and there is no way to regenerate the original sequence. 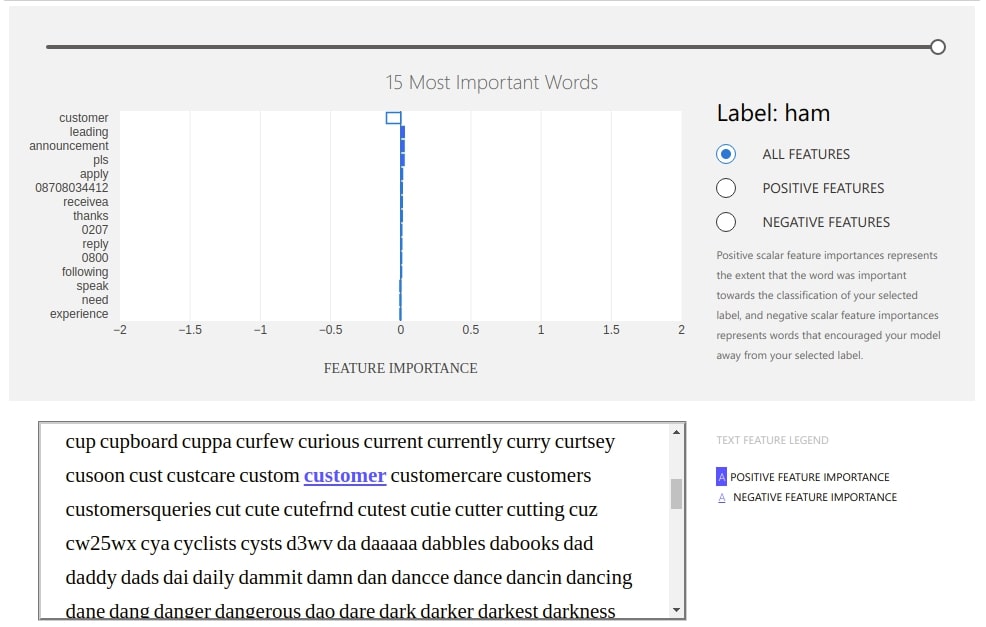 This ends our simple and small tutorial explaining the usage of interpret-text to understand predictions for text data. Please feel free to let us know your views in the comments section.