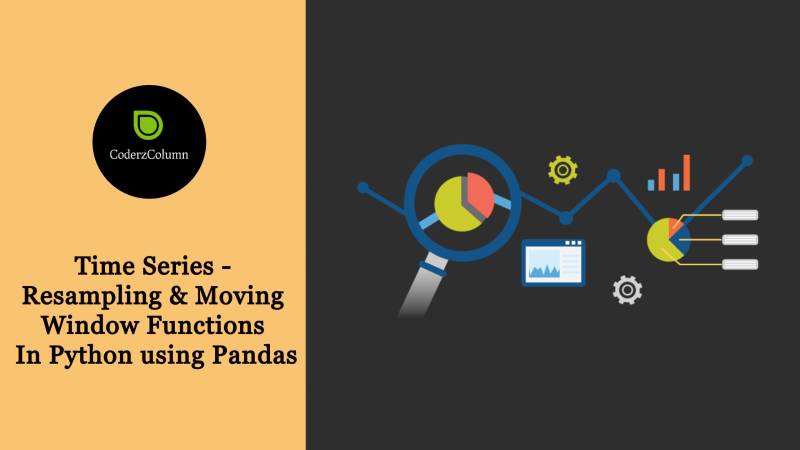 We need methods that can help us enforce some kind of frequency to data so that it makes analysis easy. Python library Pandas is quite commonly used to hold time series data and it provides a list of tools to handle sampling of data. We'll be exploring ways to resample time series data using pandas.

The first method that we'll like to introduce is asfreq() method for resampling. Pandas series, as well as dataframe objects, has this method available which we can call on them.

We'll explore the usage of asfreq() below with few examples.

Below we are trying a few examples to demonstrate upsampling. We'll explore various methods to fill in newly created indexes.

We can notice from the above example that asfreq() method by default put NaN in all newly created indexes. We can either pass a value to be filled in into this newly created indexes by setting fill_value parameter or we can call any fill method as well. We'll explain it below with few examples.

We can see that the above example filled in all NaNs with 0.0.

We can notice from the above examples that ffill method filled in a newly created index with the value of previous indexes.

We can lose data sometimes when doing downsampling and the asfreq() method just uses a simple approach of downsampling. It provides only method bfill, ffill, and pad for filling in data when upsampling or downsampling. What if we need to apply some other function than these three functions. We need a more reliable approach to handle downsampling. Pandas provides another method called resample() which can help us with that.

resample() method accepts new frequency to be applied to time series data and returns Resampler object. We can apply various methods other than bfill, ffill and pad for filling in data when doing upsampling/downsampling. The Resampler object supports a list of aggregation functions like mean, std, var, count, etc which will be applied to time-series data when doing upsampling or downsampling. We'll explain the usage of resample() below with few examples.

We are below trying various ways to downsample the data below.

The above example is taking mean of index values appearing in that 1 hour and 30-minute windows. Out time series is sampled at 1 hour so in 1 hour and 30 minutes window generally, 2 values will fall in. It'll take mean of that values when downsampling to the new index. We can call functions other than mean() like std(), var(), sum(), count(),interpolate() etc.

Please make a note that we can even apply our own defined function to Resampler object by passing it to apply() method on it.

The above examples clearly state that resample() is a very flexible function and lets us resample time series by applying a variety of functions.

Please make a note that in order for asfreq() and resample() to work time series data should be sorted according to time else it won't work. It's also suggested to use resample() more frequently than asfreq() because of flexibility of it.

Moving window functions refers to functions that can be applied to time-series data by moving fixed/variable size window over total data and computing descriptive statistics over window data each time. Here window generally refers to a number of samples taken from total time series in order and represents a particular represents a period of time.

There are 2 kinds of window functions:

rolling() function lets us perform rolling window functions on time series data. rolling() function can be called on both series and dataframe in pandas. It accepts window size as a parameter to group values by that window size and returns Rolling objects which have grouped values according to window size. We can then apply various aggregate functions on this object as per our needs. We'll create a simple dataframe of random data to explain this further. 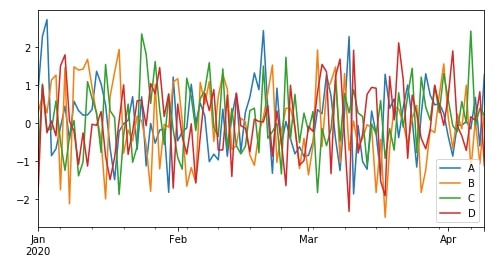 Above, We have created a rolling object with a window size of 3. We can now apply various aggregate functions on this object to get a modified time series. We'll start by applying a mean function to a rolling object and then visualize data of column B from the original dataframe and rolled output. 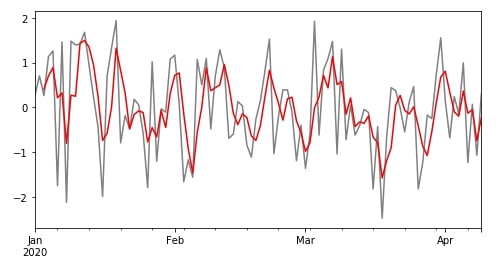 There are many other descriptive statistics functions available which can be applied to rolling object like count(), median(), std(), var(), quantile(), skew(), etc. We can try a few below for our learning purpose. 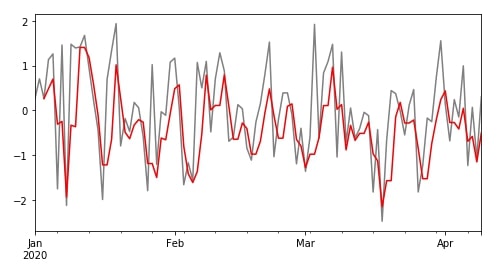 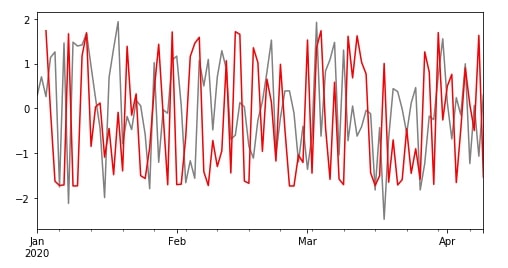 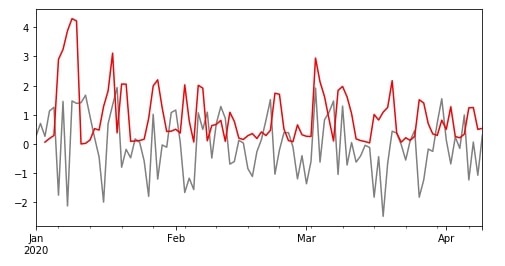 We can even apply our own function by passing it to apply() function. We are explaining its usage below with an example.

Please make a note that input to function passed to apply() will be numpy array of samples same as window size. 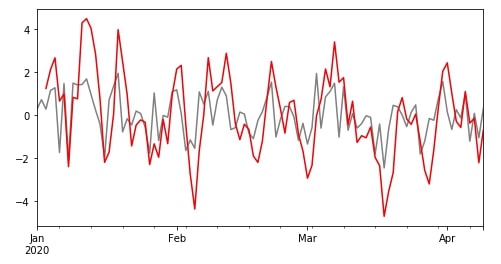 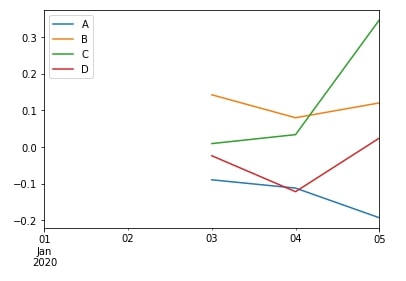 We can notice above that our output is with daily frequency than the hourly frequency of original data.

Pandas provided a function named expanding() to perform expanding window functions on our time series data. expanding() function can be called on both series and dataframe in pandas. As we discussed above, expanding window functions are applied to total data and takes into consideration all previous values, unlike the rolling window which takes fixed-size samples into consideration. We'll explain it's usage below with few examples. 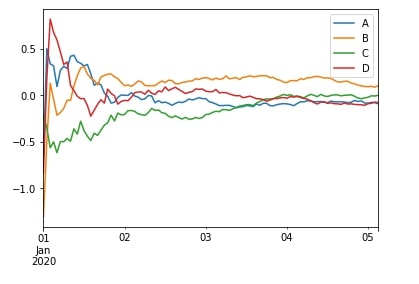 We can notice from the above plot that the output of expanding the window is fluctuating at the beginning but then settling as more samples come into the computation. The output fluctuates bit initially due to less number of samples taken into consideration initially. The number of samples increases as we move forward with computation and keeps on increasing till the whole time-series has completed. 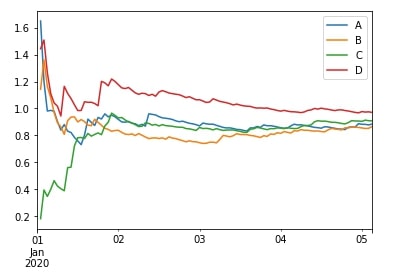 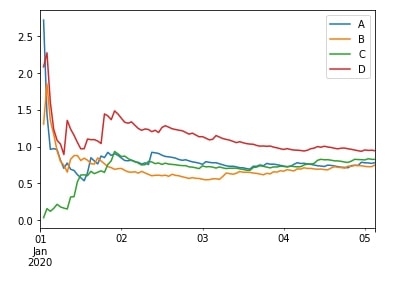 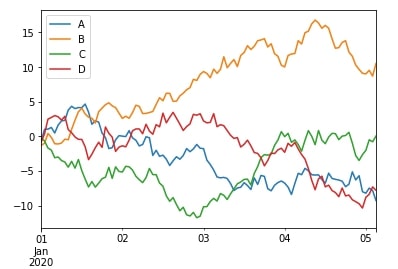 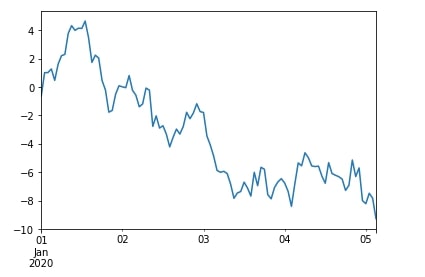 We'll generally use expanding() windows function when we care about all past samples in time series data even though new samples are added to it. We'll use it when we want to take all previous samples into consideration. We'll use rolling() window functions when only the past few samples are important and all samples before it can be ignored. 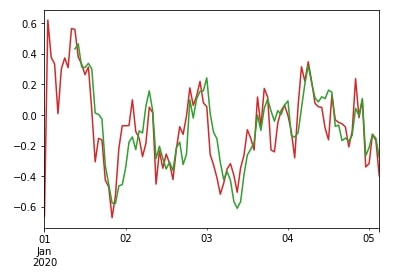 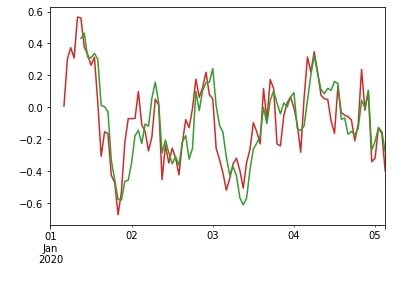 We can apply a different kinds of aggregation functions like we applied above with rolling() and expanding() functions. We'll try below a few examples for explanation purposes. 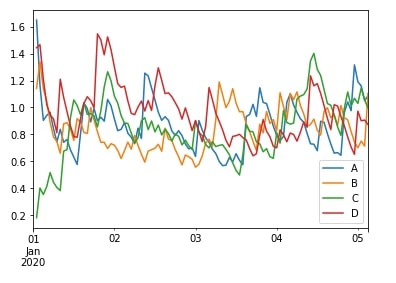 This concludes our small tutorial on resampling and moving window functions with time-series data using pandas. Please feel free to let us know your views in the comments section below.