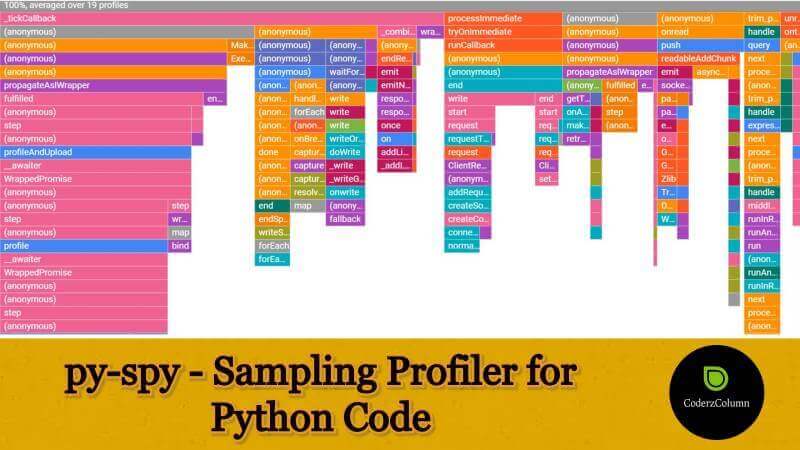 Python has a bunch of good code profiling libraries like cProfile, pprofile, line_profiler, profile, etc. All of this profiler requires us to modify our Python code in some way to profile it and even adds some profiling overhead as they run in the same thread as the main program. The py-spy is a python profiler that performs profiling by sampling running python code and it runs in a separate process than our original code. This results in not impacting the performance of our original python script. The py-spy is designed in Rust and is a very good solution for profiling running python code. It can be very useful for the process running in the production as it'll let us profile it without adding any line of code as well as it'll run in a process of its own hence won't add overhead.

The py-spy finds out call stack of python code by looking at global PyInterpreterState to get all threads running in the python interpreter and then iterates over PyFrameObjects in each thread to get total call trace. It pauses the program for a small amount of time each time sampling for the profiling results. Below we have given some information on some useful options available with py-spy.

Please make a note that py-spy might need to be run with root/administrator access on systems that don't let it access processes running the system for profiling.

The py-spy has three main commands each of which has few options for showing profiling results in a different way.

This ends our small introduction of py-spy. We'll now explain the usage of py-spy with few examples.

In this section, we'll explain with a different example of how we can use the record command of py-spy to record the profiling of a script or process.

Below we have given a general command format that we can use with the record option of py-spy.

Our first example simply explains how we can record profiling results using py-spy. We'll be profiling the below script using py-spy. The script loops 1000000 times generating two random numbers, adding them, and then adding sum to a list before returning a list. We have saved a code to a file named example_2.py in the profiling_examples folder.

Below we have profiled the script using py-spy record options. The py-spy record option expects us to give the file name to which the output of profiling will be stored. Please make a note that by default py-spy record command generates a flame graph of profiling results. Few of our examples start with the ! symbol because we have executed scripts from jupyter notebook which lets us execute the shell command from the notebook.

As a part of our second example, we'll explain how we can use py-spy to profile running python program by tracking its process id. We have written a script that has three functions that generate 100000 in the range 1-100 and then take an average of it before returning. All functions take different time for it because we have artificially introduced time so that it takes longer. We'll be monitoring the process using py-spy which runs this code. We have stored code to a file named a_random_generator.py in the profiling_examples folder.

The process of executing step and generating profiling results by monitoring process will require 3 shells on Linux.

In the first shell, we'll execute the python script as mentioned below.

In the second shell, we'll execute the below command to get the process id of the script which we'll use for profiling.

In the third shell, we'll execute the below-mentioned command to generate the profiling result of the process. The py-spy provides us with option --pid <process_id> or -p <process_id> which can be used to monitor process.

Please make a note that the output file will also be created with root access.

The py-spy lets us format output generated in three formats as mentioned below using -f <format> or --format <format> option.

We can format output to be raw text using --format raw option and it'll store the output in a file in raw text format. We have below generated raw text output for our code from example 1.

Below we have generated output in a format speed score for our random numbers generator script from the previous example. The output will be stored in a file and when we upload the file to a https://www.speedscope.app/, it'll generate speed scope there which we can analyze for performance.

The output generated by a py-spy is according to the sampling it performed which means that if a function is running longer then it'll have more than one entry in the profiling results. We can merge all these entries into one entry by using -F or --function option which will aggregate all entries of the function.

Below we have profiled our code from example 1 again but this time we have aggregated function calls.

As a part of our sixth example, we'll explain how we can inform py-spy to keep information about threads in multi-threading example. We have written a simple script that creates a thread pool of 3 threads. Each thread calls a function that generates a random number in the range 1-100 and returns it taking the time of 2 seconds. We have submitted these 3 threads to the thread pool and retrieving results once they complete. We have kept the code written below to the file named multi_threaded_example.py in the profiling_examples folder.

The py-spy provides us with an option named --threads or -t which instructs thread id to be added in the profiling results.

The below code expects that developer has knowledge of the python module named concurrent.futures. Please feel free to check our tutorial on the same if you are interested in learning it.

Below we have generated a flame graph of the script.

The py-spy also provides us with the option to monitor subprocesses created by our main process using --subprocesses or -s option. Below we have written a simple script which creates three sub-processes from our original process using the process pool of concurrent.futures module. Each process calls a random numbers generator function which generates an array of size 1000 x 1000 of random numbers in the range 1-100 and then returns the average of the array taking a different time. We have kept the code in a file named multi_processing_example.py in the folder profiling_examples. This code also expects background knowledge of concurrent.futures module.

Below we have profiled the script using --subprocesses option.

The py-spy does not monitor idle threads by default but we can force it to do so using --idle or -i option. Below we have executed our script from a multi-threading example with --idle option.

The py-spy generally profiles results by pausing the running program for every sampling which can add little overhead. We can force py-spy to not block the running program and profile results using --nonblocking option. Please make a note that results might not be very accurate with this option.

Below we have given a few other useful options available with record command of py-spy.

We can access the doc of py-spy record using the below command.

The dump command lets us profile one frame of running a python program and prints results to standard output. Below is the common format of using py-spy with dump command.

In this example, we have explained simply how we can profile running python programs using the dump command of py-spy. We have used three different shells for this like our earlier example on the profiling process.

In this shell, we'll run our random generator python program from earlier.

In the second shell, we'll try to get the process id of running the python program.

In the third shell, we'll profile the running python programs using process id. Please make a note that we have used sudo as in Linux, root access is required to access process data.

Our second example is exactly the same as our previous example with the only difference that we have generated output in a JSON format using --json option.

Below are other useful options available with dump command of py-spy.

We can access helper documents as well with the below command.

The top command also lets us profile the running process. We have followed the same steps as we had followed earlier to profile the random numbers generator script. We have again started three shells and executed commands in each as explained below.

In this shell, we'll execute our python script which will run for around 30 seconds.

In the second shell, we'll try to get the process id of the running process.

In the third shell, we'll use the top command of py-spy to monitor the process. Please make a note that we are using sudo as we'll need to run this command with root access.

As apart of our third example, we are explaining the usage of top command for multi-processing example. We are again reusing the script from our previous example (Example 7). We have used --subprocesses option which instructs py-spy to monitor all sub-processes generated by our main program.

We can access the helper doc as mentioned below.

This ends our small tutorial explaining how we can use py-spy to profile the python program. Please feel free to let us know your views in the comments section.

Please feel free to let us know in the comments section below (Guest Comments are allowed). We appreciate and value your feedbacks.
Published On : Nov-20,2020 Time Investment : ~25 mins