How to Plot Radar Charts in Python [plotly]?¶ 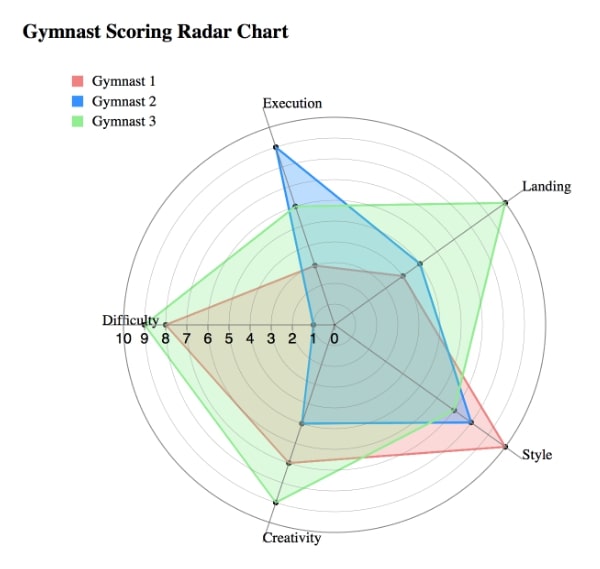 The radar charts also have a few limitations which are worth highlighting. If there are many observations to be displayed then radar charts get crowded. As more polygons are layered on top of each other, distinguishing observations becomes difficult. Each axis of the radar chart has the same scale which means that we need to scale data and bring all columns to the same scale. The alternative charts to avoid pitfalls of radar charts are parallel coordinate charts and bar charts.

This ends our small intro of radar charts. We'll now start with the coding part by importing necessary libraries.

Both of these datasets are available from the sklearn.datasets module. We'll be loading them and keeping them as a dataframe for using them later for radar charts.

Radar chart expects those quantitative variables that we are going to plot are on the same scale. We have used scikit-learn MinMaxScaler scaler to scale data so that each column’s data gets into range [0-1]. Once data is into the same range [0-1] for all quantitative variables then it becomes easy to see its impact. We'll be scaling both iris and wine datasets using MinMaxScaler.

We have grouped iris flowers dataset by flower type and have then take the mean of each column. This will give us the average value of each data dimension for each flower type. We'll use this data to plot radar charts.

We'll be explaining both one by one now.

There are other attributes of data that are generic to plotly for plot decoration.

We'll be first plotting IRIS flower setosa based on average values we have calculated for this flower type. 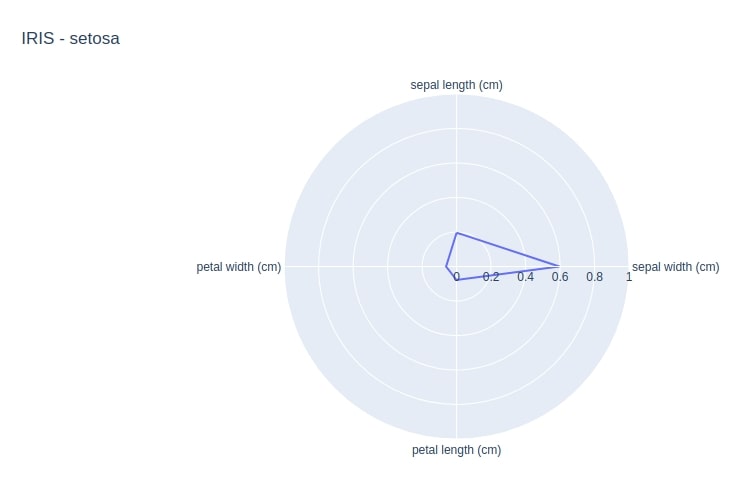 The line_close parameter if set to True will connect end variables to create the polygon. We have also set the range_r attribute to 0-1 because we scaled down all variables between 0-1 using MinMaxScaler earlier.

Below we are using same line_polar() function to plot radar chart for IRIS Versicolor flower type. We can also later update chart attributes by using the update_traces() method. We are filling radar chart polygon this time by setting fill attribute value to toself. We can also change the direction of quantitative variables layout by setting the direction attribute to counterclockwise. We can also set the start angle from where we want to start plotting quantitative variables by setting the start_angle attribute. The default for start_angle is 90. 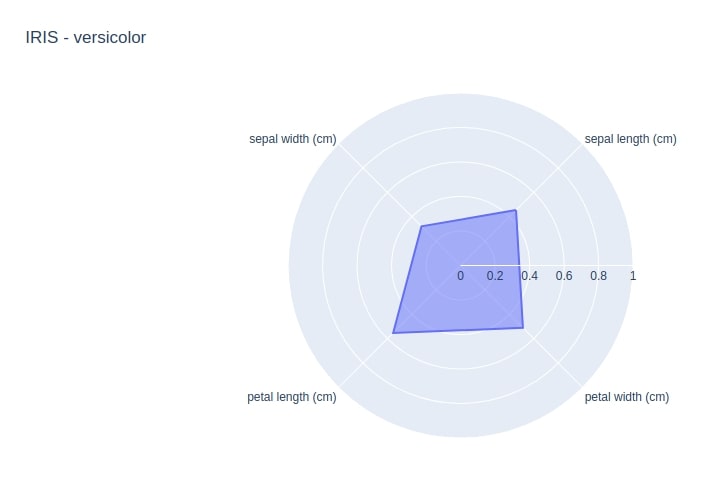 Below we have plotted the radar chart for Wine of class 0. The wine dataset has 13 variables to compare. 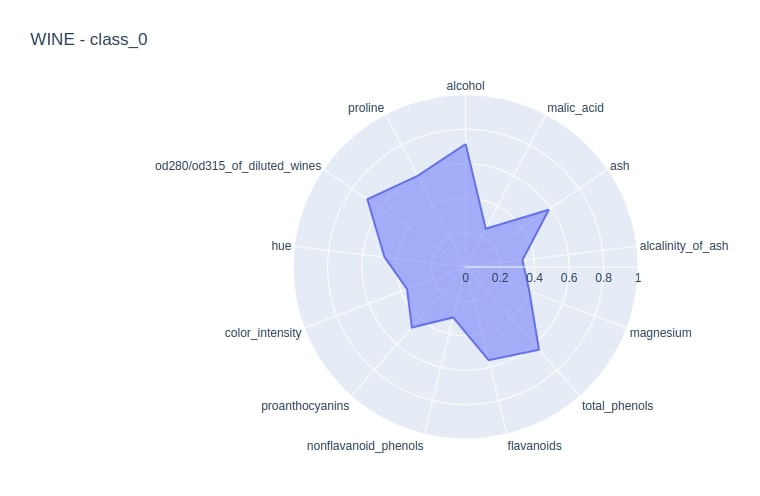 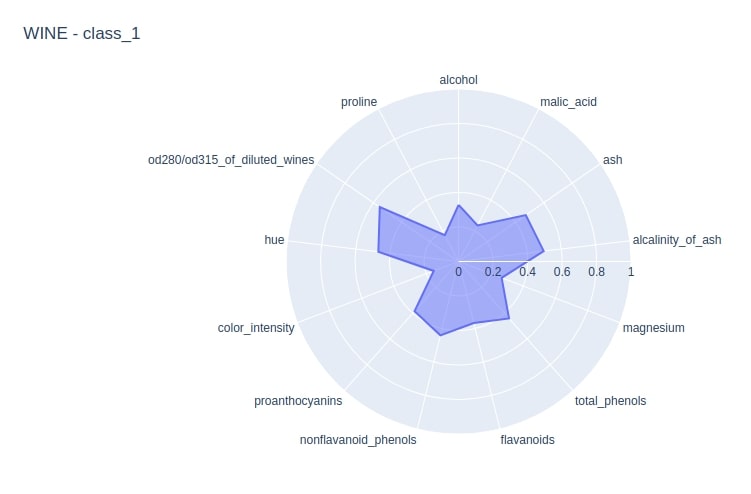 The second method provided by plotly is Scatterpolar available as a part of the graph_objects module of plotly. It has almost the same parameter requirement as that of line_polar() for creating radar charts. It expects that we provide parameter r and theta for generating radar charts. We can specify fill color, line color, fill, etc attributes by passing them directly to this method.

Below we are using Scatterpolar to generate radar chart for IRIS flower type verginica. 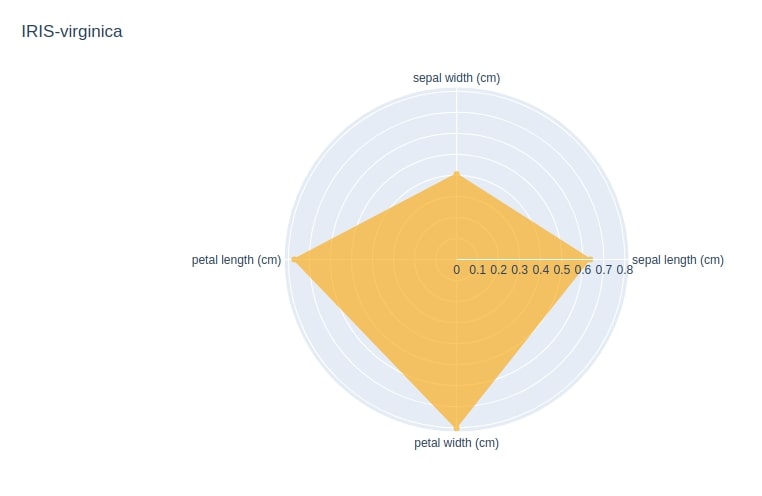 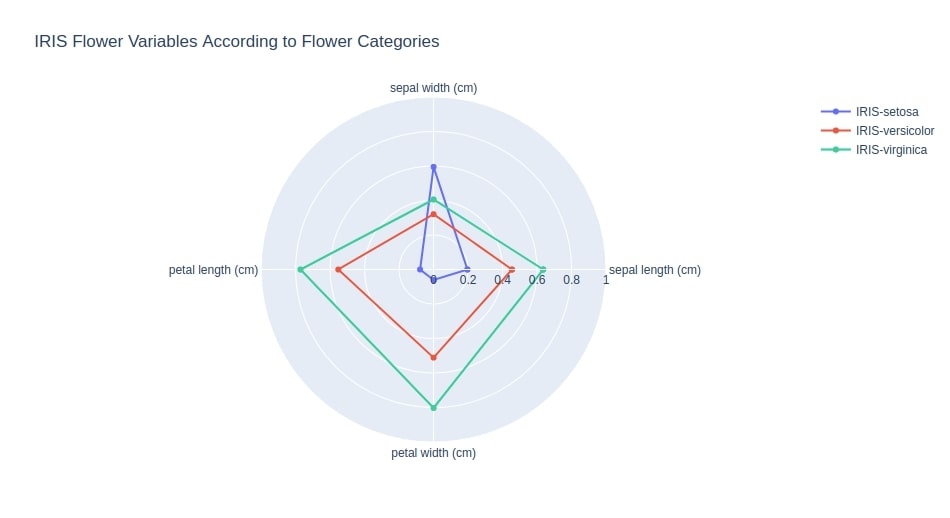 Below we are again plotting three different iris flowers with their polygon filled in this time. 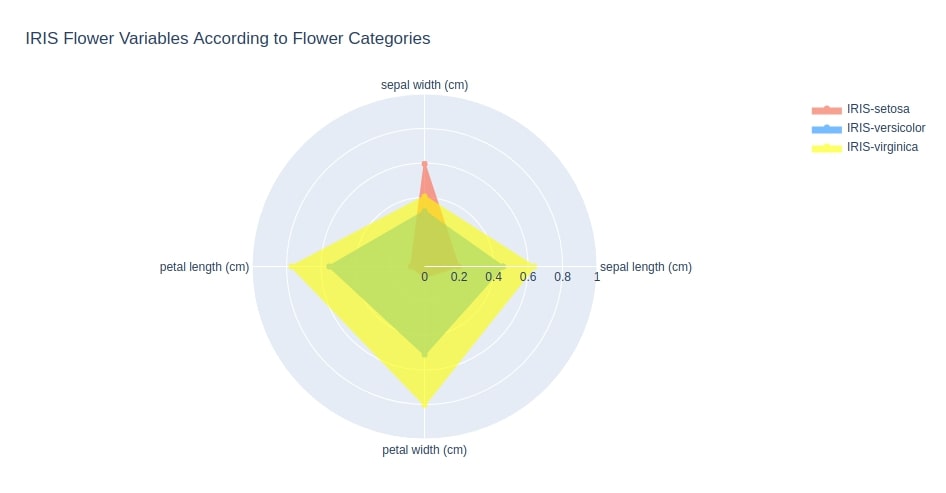 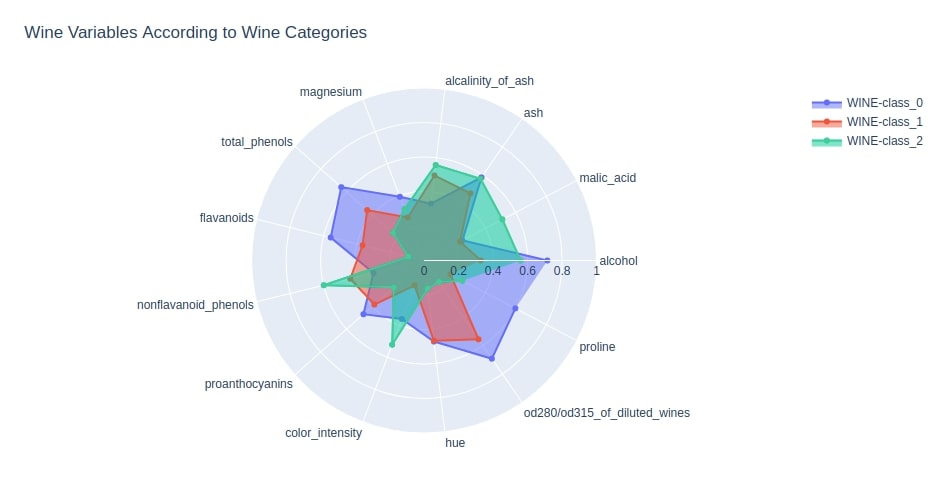