How to Plot Parallel Coordinates Plot in Python [Matplotlib & Plotly]?¶

Parallel coordinates charts are commonly used to visualize and analyze high dimensional multivariate data. It represents each data sample as polyline connecting parallel lines where each parallel line represents an attribute of that data sample. If we take an example of IRIS flowers dataset which has 4 dimensions (petal width & length, sepal width, and length) recorded then there will be four parallel lines drawn vertically in 2d plane and each sample of the flower will be drawn as polyline connecting points on these four parallel lines according to that samples measurements. It’s a common practice to scale data in order to get all data variables in the same range for better understanding. The scaling let us analyze data variables which are on totally different scales.

The radar charts are another alternative for analysis and visualization of multivariate data where parallel lines (axes) are organized radially. If you are interested in learning plotting radar charts in python then we have already covered detailed tutorial - How to Plot Radar Chart in Python? and we suggest that you go through it as well. Andrews’s plot is one more alternative to parallel coordinates plot which is a Fourier transform of parallel coordinates plot.

All datasets are available from the sklearn.datasets module. We'll be loading them and keeping them as a dataframe for using them later for parallel coordinates plot.

We'll be plotting charts with scaled data as well in order to compare it to non-scaled data. We have used scikit-learn MinMaxScaler scaler to scale data so that each column’s data gets into range [0-1]. Once data is into the same range [0-1] for all quantitative variables then it becomes easy to see its impact. We'll be scaling iris, Boston, and wine datasets using MinMaxScaler.

The pandas module named plotting provides ready to use method named parallel_coordinates which can be used to plot parallel coordinates charts. We need to provide it dataframe which has all data and categorical column name according to which various category samples will be colored.

It also has a parameter named color which accepts a list of color names to use for categories of column provided.

Below we have provided iris dataframe as input and FlowerType column for coloring samples according to flower category. We also have provided color names for categories. 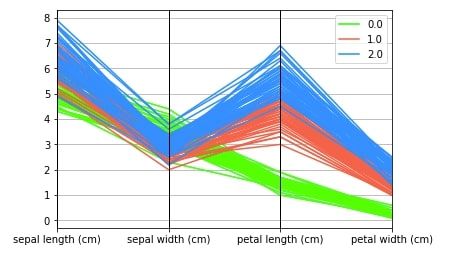 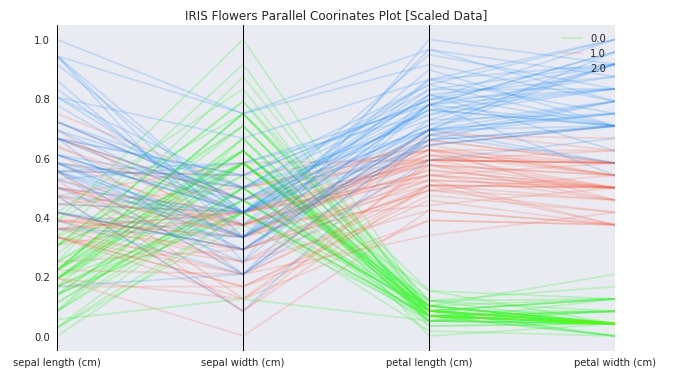 Below we are again plotting parallel coordinates chart using iris scaled data, but this time we have changed column order by providing a list of columns as input to cols parameter of parallel_coordinates method. We can also ignore columns of dataframe if we don't want to include them in the chart by providing a list of column names to be included in the chart to cols parameter. 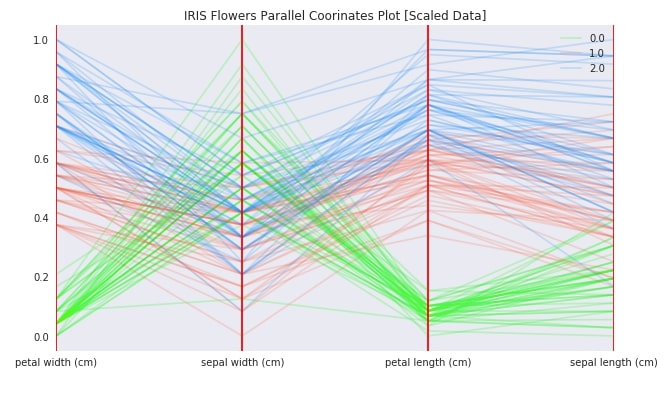 Below we have plotted parallel coordinates chart for wine scaled dataframe. We can see that few columns of data clearly show different values based on categories whereas for a few others its not clear. 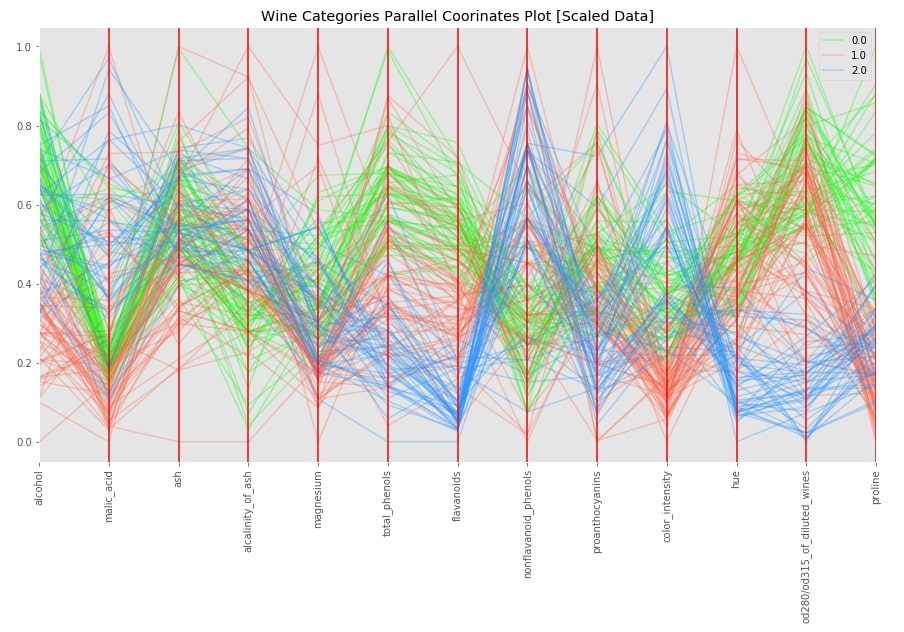 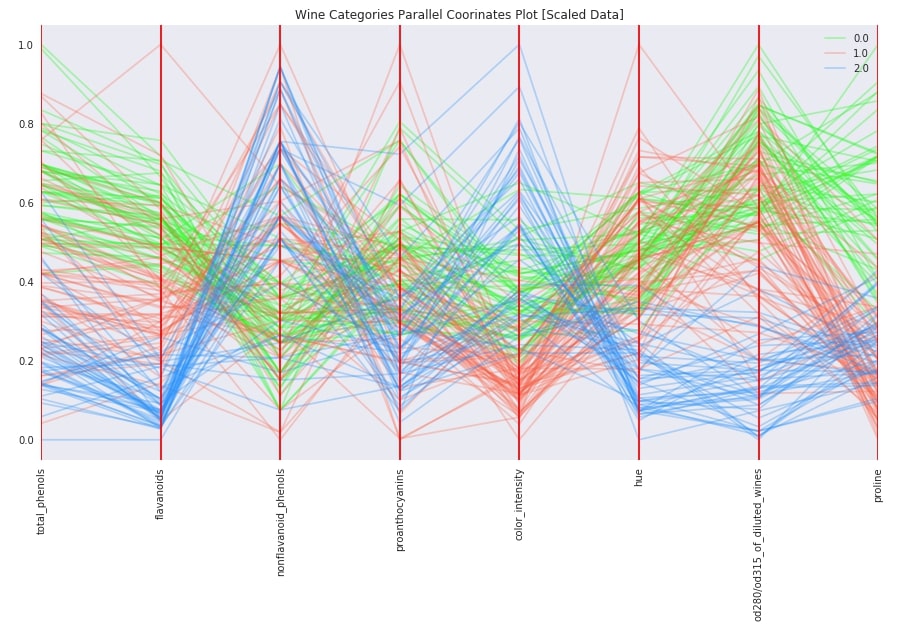 The plotly.express module has a method named parallel_coordinates which accepts dataframe containing data and categorical column name which to use to color samples of data according to categories.

Below we are creating a parallel coordinates chart for iris data. We have provided the FlowerType column to color attribute in order to color samples according to iris flower types. 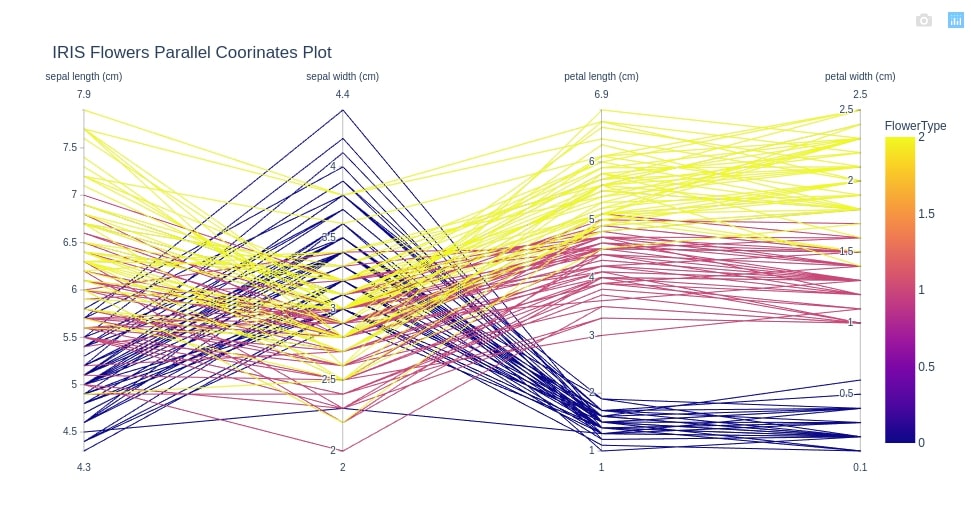 Below we are creating a parallel coordinates chart for the wine dataset. We are providing column names as input to the dimensions parameter of the method. 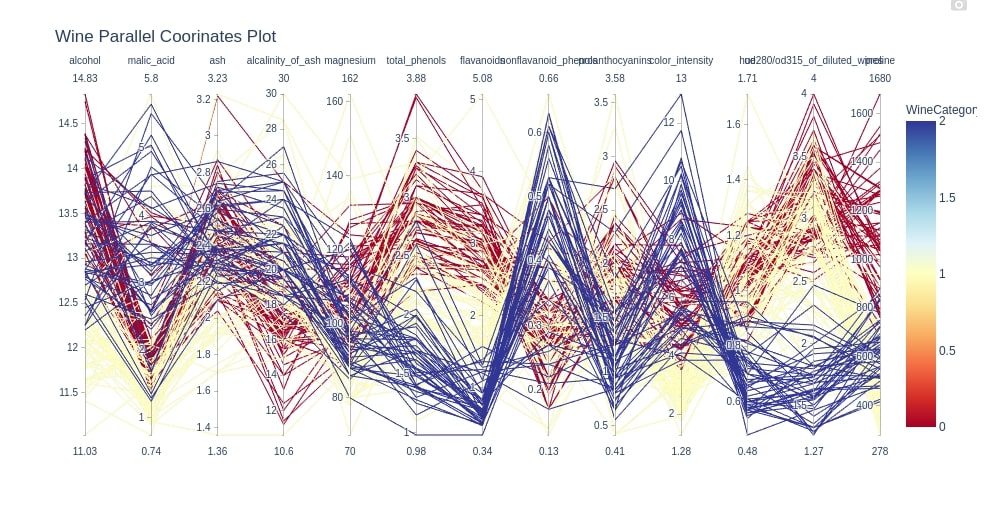 Below we are again creating a parallel coordinates chart for the wine dataset but this time with the last few columns which has samples clearly showing differences based on the wine category. We have also changed the colors of the chart by setting the color_continuous_scale attribute. 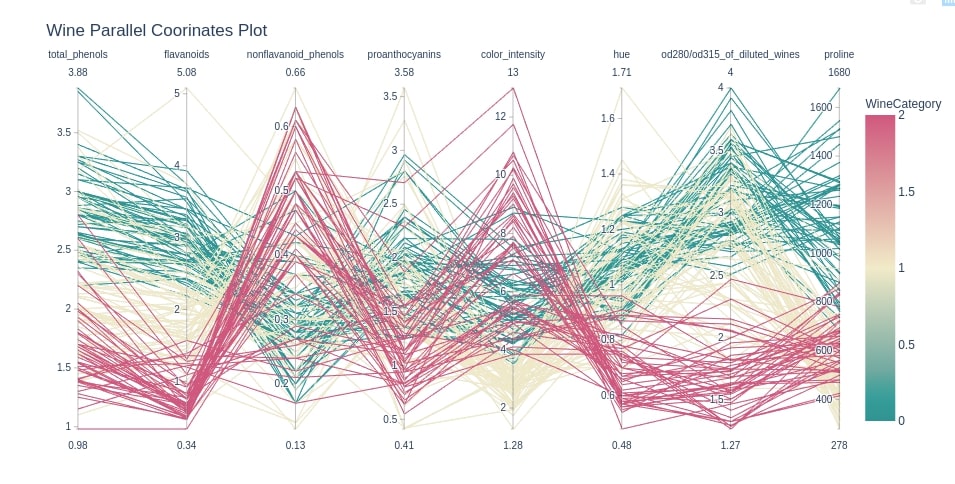 Below we are plotting the parallel coordinates chart for the Boston dataset. We are using HousePrice as an attribute to color samples. We can analyze which attributes are contributing to high house prices.

Below we are plotting parallel coordinates chart for iris dataset. 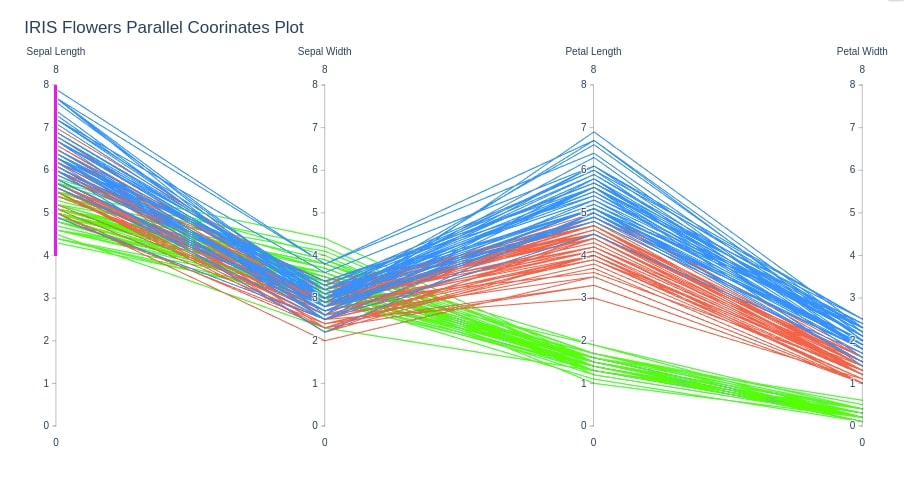 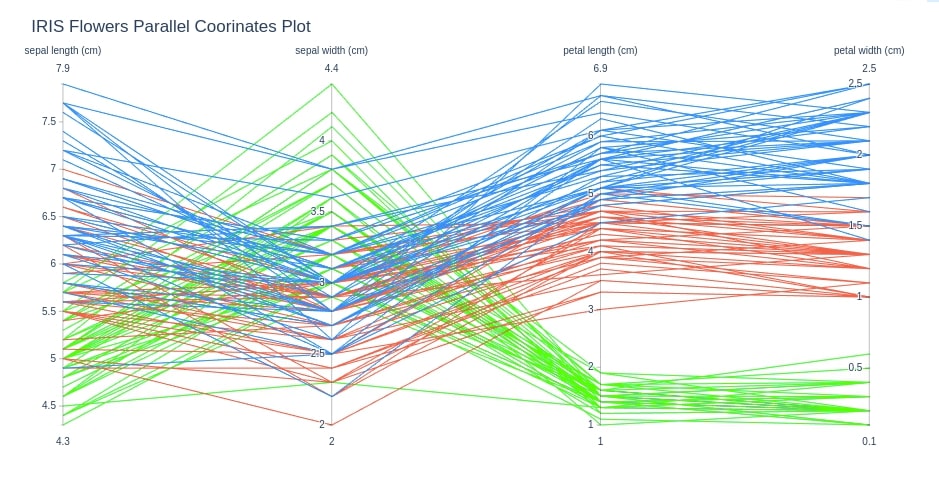 Below we are plotting parallel coordinates chart for wine dataset. 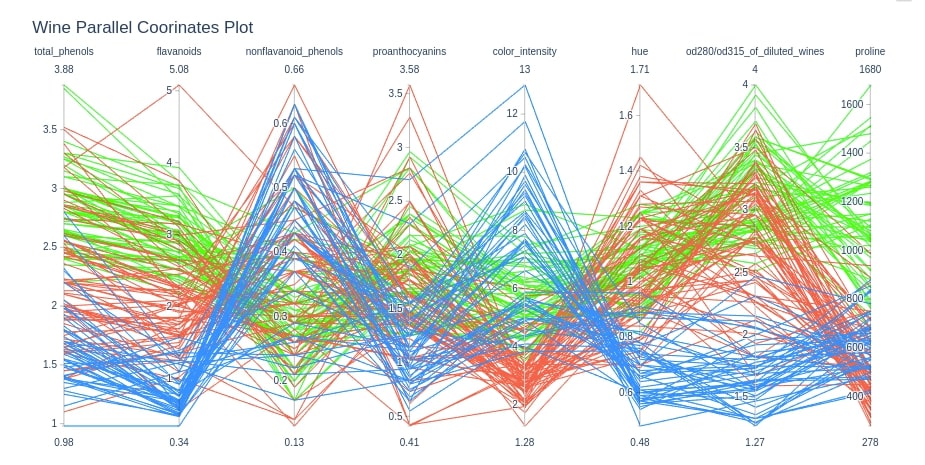 Below we are plotting the parallel coordinates chart for the Boston dataset. 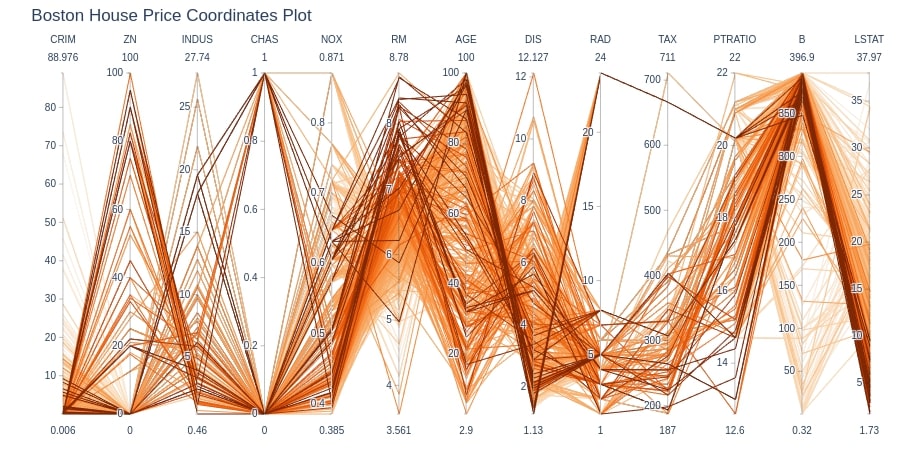 Below we are again plotting parallel coordinates chart for Boston house price dataset but this time for houses with prices in the range of 25,000-50,000 only by setting cmin and cmax parameters of dictionary given to line parameter. 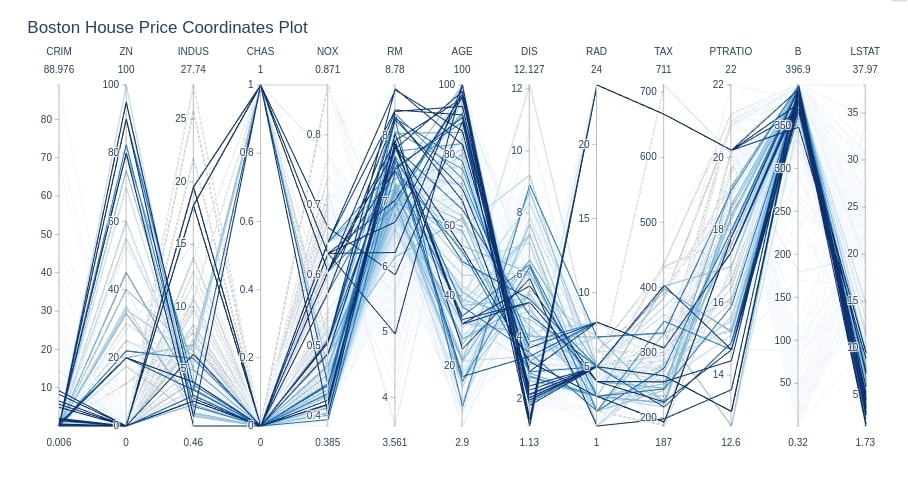 This ends our small tutorial on parallel coordinates charts plotting using python. Please feel free to let us know your views in the comments section.