How to Create Sunburst Chart/Diagram in Python [Plotly]?¶

It can be used to display any kind of hierarchical or multi-level data.

The sunburst chart is very similar to treemap charts with the only difference being that data is laid out radially. If you are interested in learning treemap plotting using python then feel free to go through our tutorial on treemap which explains various ways to draw treemap in python.

> What Can You Learn From This Article?¶

As a part of this tutorial, we have explained how to create sunburst charts in Python using interactive data visualization library "plotly". Tutorial explains different ways of creating charts using Plotly Python API with simple and easy-to-understand examples.

Below, we have listed important sections of tutorial to give an overview of material covered.

We'll also be using 3 datasets available from kaggle to include further data for analysis and plotting.

We'll be explaining both ways one by one below.

The plotly has a module named express which provides easy to use method named sunburst() which can be used to create sunburst charts. It accepts dataframe containing data, columns to use for hierarchy, and columns to use for actual values of the distribution. We can provide a list of columns with hierarchical relations as a list to the path attribute of the method. The values to use to decide the sizes of distribution circles can be provided as a column name to the values attribute. We can also provide title, width, and height attributes of the figure. The sunburst() method returns a figure object which can be used to show a chart by calling show()** method on it.

We'll need to prepare the dataset first in order to show Starbucks store counts distribution per city, and country worldwide. We'll be grouping the original Starbucks dataset according to Country, and City. Then we'll call count() on it which will count entry for each possible combination of Country and City. We also have introduced a new column named World which has all values same containing string World. We have created this column to create a circle in the center to see the total worldwide count. 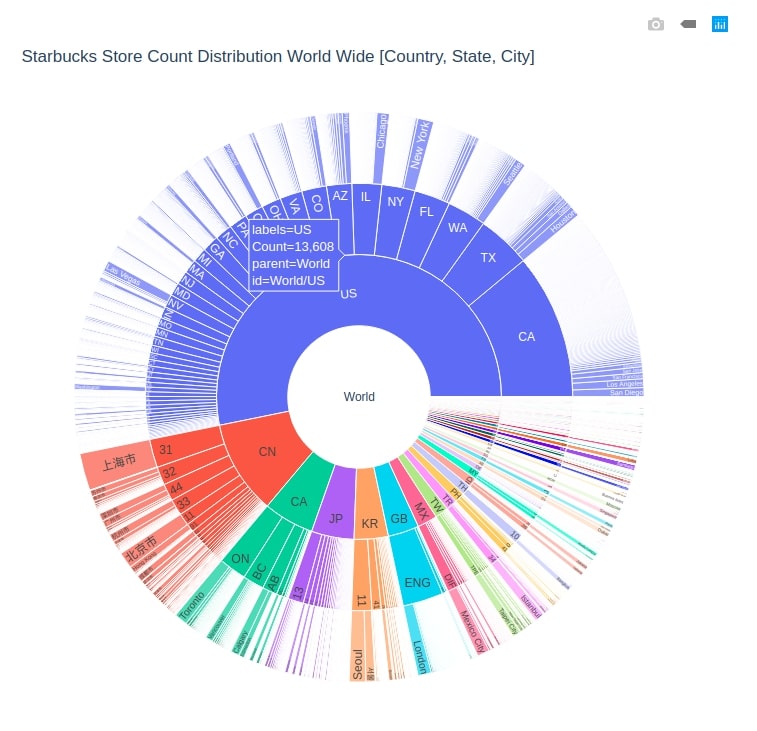 Below we are creating a sunburst chart depicting population distribution per district of India in 2011. We have passed the path parameter list of columns necessary to create a hierarchy. We have covered this in our tutorial on treemap as well. 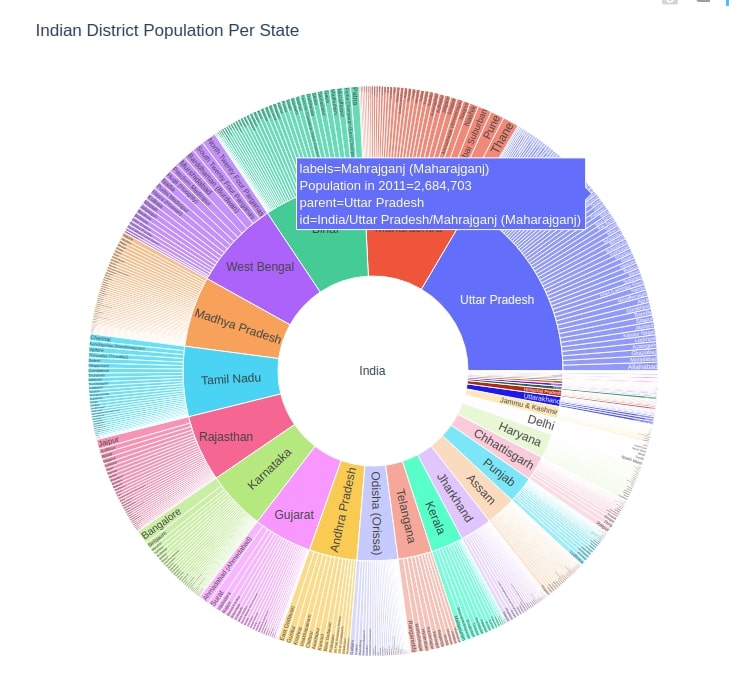 Below we have created a sunburst chart showing population count per country per region of the world. We have provided necessary columns having a hierarchical relationship to the path parameter of the method. 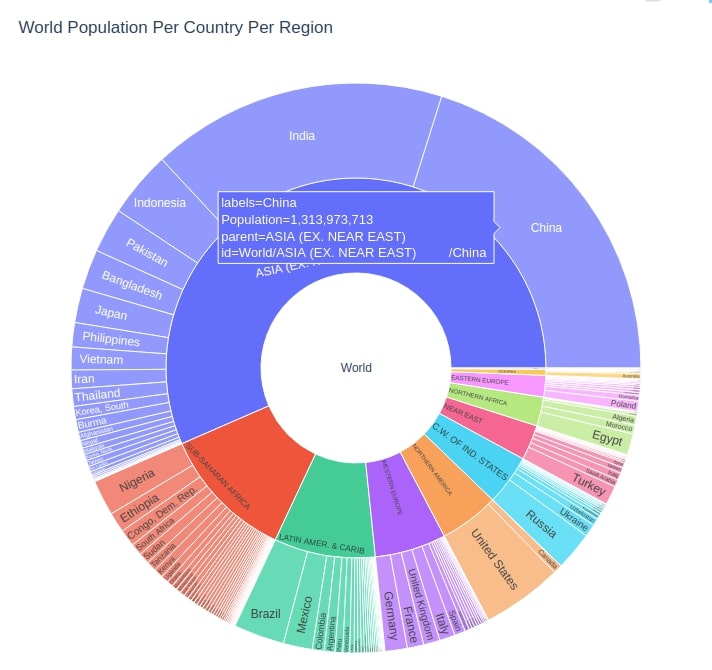 Below the sunburst chart explains area distribution per country per region worldwide. 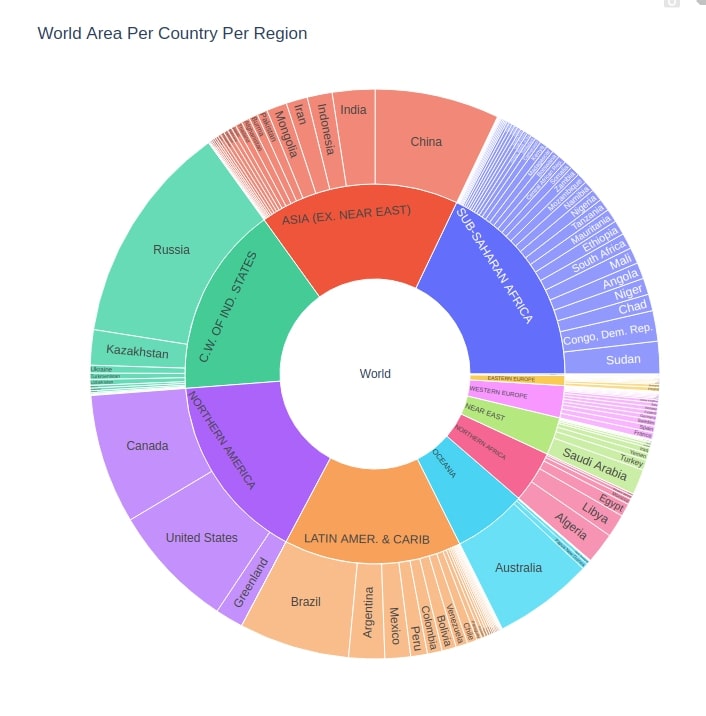 Below we have again plotted a sunburst chart explaining population distribution per country per region but we have also color-encoded each distribution according to GDP of that country/region.

We can compare the population and GDP of the country based on this sunburst chart. We can notice that countries like India and China have less GDP even though having more population whereas countries like the US, Japan, Germany, UK, France, Australia, and Hong Kong have less population but more GDP. 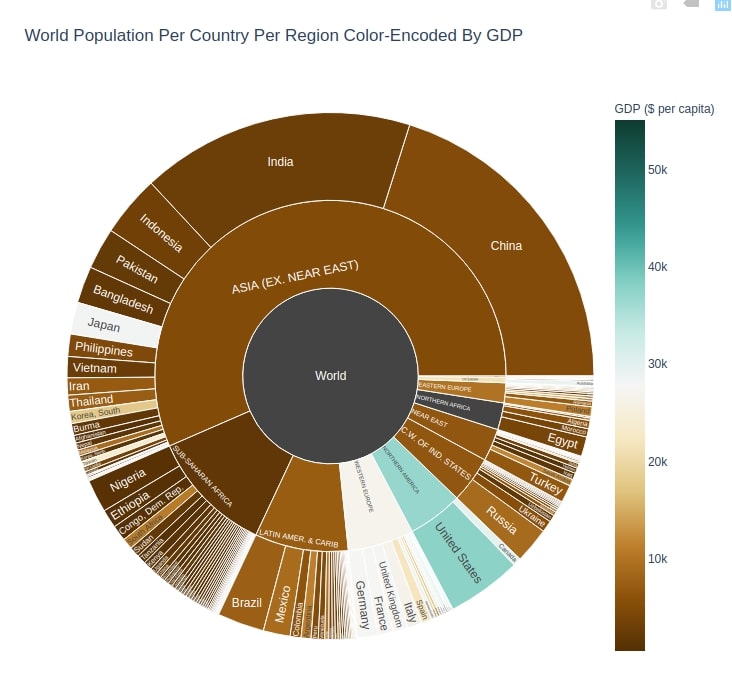 Below we have again plotted population distribution per country per region of the world but this time we have color-encoded data to the area of countries and regions. This helps us compare the relationship between population and area.

We can notice that countries like India are more but has less area compared to countries like Russia, the United States, and Brazil which have visibly more area with less population. 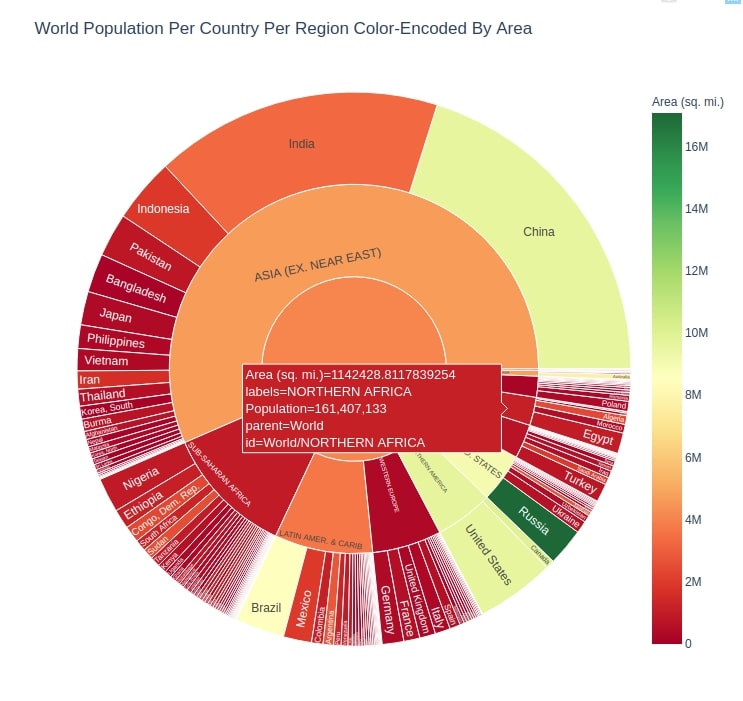 The second way of creating a sunburst chart using plotly is using the Sunburst() method of the graph_objects module. We need to provide it a list of all possible combination of parent and child combination and their values in order to create a chart using this method. 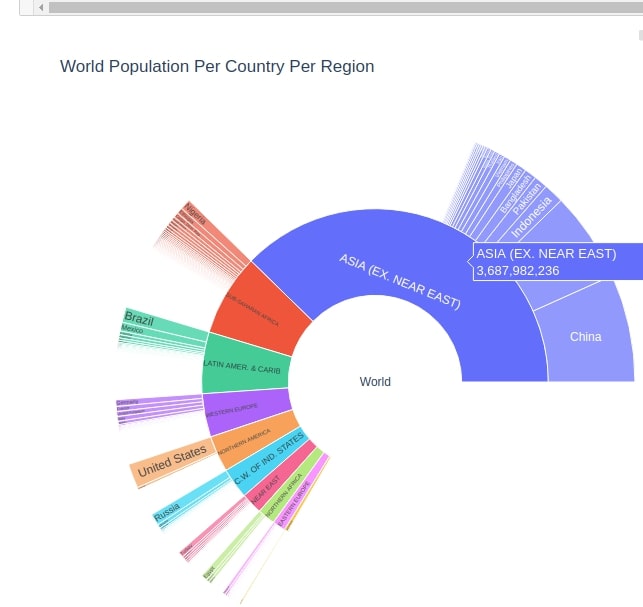 Below we have again created a sunburst chart of population distribution but this time it looks completely like the plotly.express module. We have set the branchvalues parameter to string value total which fills the whole circle. By default, the Sunburst() method does not create full circle sunburst charts. 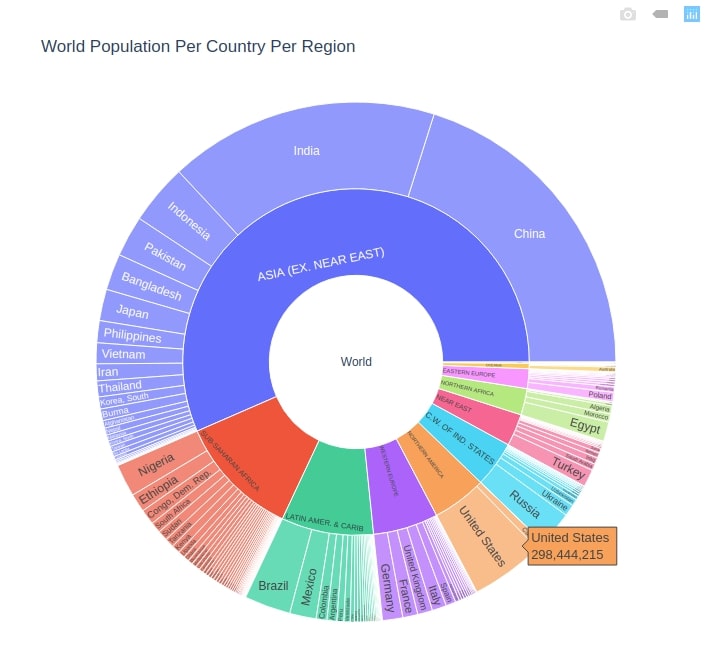 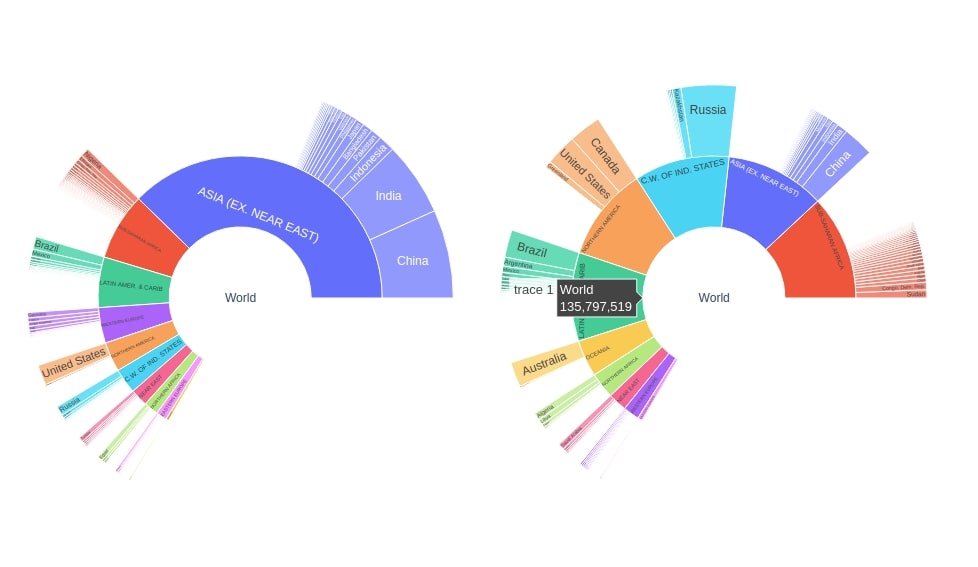 This ends our small tutorial explaining how to plot a sunburst chart in python using plotly.