Nowadays, getting good accuracy on computer vision tasks has become quite common due to convolutional neural networks. The models are easily generating more than 90% accuracy on tasks like image classification which was once quite hard to achieve. Though, many times, a high accuracy model does not necessarily mean that model has generalized well and uses patterns correct patterns from data to make predictions. Such models that have not generalized well fail miserably in production. Hence, to avoid a situation like that, we need a way to understand that our model is actually using parts of the sample that it should use for making predictions. To give an example, let's say that we have an image classification task of classifying cat vs dog, then our model should be activating on parts of the image where there is a cat or dog and not on some background. If we can get information about which parts our model is activating then we can be more confident about the performance of our network that it is using the right patterns to make predictions.

To our surprise, an algorithm named Grad-CAM (Gradient-weighted Class Activation Mapping) is developed that let us look at parts of the image that contributed to the prediction. The grad-CAM algorithm uses the gradients of any target (say 'cat' in a classification network) flowing into the final convolution layer to produce a coarse localization map highlighting the important regions in the image for predicting the concept. Basically, it highlights activations that contributed most to predicting the particular category using gradients of the last convolution layer with respect to predicted output. The output of the grad-CAM algorithm is a heatmap with the same shape as that of an image which we can overlay over the image to see which parts of the image contributed to the prediction. Below, we have highlighted the steps of the grad-CAM algorithm.

The steps will become more clear when we explain with an example below.

As a part of our tutorial, we have used the Fashion MNIST dataset and trained a simple convolutional neural network of 3 convolution layers on it. The network is designed using PyTorch. We have tried to keep things simple for the reader to understand how the algorithm works and how individuals can code it for their task. After getting good accuracy using our model, we have explained the prediction using the Grad-CAM algorithm by showing step by step process.

Below are important sections of tutorial to give an overview of the material covered.

Below, we have imported PyTorch and printed the version of it that we have used in our tutorial.

In this section, we have loaded the Fashion MNIST dataset available from keras. The dataset has grayscale images of shape (28,28) pixels for 10 different fashion items. The dataset is already divided into a train (60k images) and test (10k images) sets. After loading datasets, we have converted them to PyTorch tensors. Then, we have created tensor datasets and data loaders for looping through data easily in bathes during training. We'll be using these data loaders during training. Below, we have included mapping from the target class index to the target class name.

Here, we have defined the network that we'll use to classify images. We have designed a simple convolutional neural network using PyTorch. The network has 3 convolution layers and one linear layer. The convolution layers have 48, 32, and 16 output channels respectively. All of them have relu activation function. The last linear layer has 10 output units which are the same as the number of target classes.

Please make a NOTE that we have not covered how to design a network using PyTorch in detail. Please feel free to check the below links if you want a background with it.

In this section, we have trained our network on data. We have created a simple training function. The function takes model, loss function, optimizer, train loader, validation loaded, and epochs as input. It then executes the training loop number of epoch times. Each time, it loops through whole training data in batches using train data loader. During each batch, it performs a forward pass to make predictions, calculates loss using predictions & actual targets, calculate gradients, and update network parameters using gradients. It keeps track of loss during each batch and prints average loss after completion of an epoch. It also calculates validation loss and validation accuracy after each epoch and prints it. We have created helper functions to make predictions and calculate the loss for validation data.

Below, we have actually trained our network using the training function defined in the previous cell. We have initialized a number of epochs to 5 and the learning rate to 0.001. Then, we have initialized the network, initialized cross entropy loss, and Adam optimizer. At last, we have called our training routine to perform training. We can notice from the loss and accuracy getting printed after each epoch that our model is doing a good job at the image classification task. Now, in the next section, we can actually verify which parts of images are contributing to prediction using Grad-CAM algorithm.

In this section, we'll try to explain the prediction made by our model using Grad-CAM algorithm. We have first explained the whole process step by step by executing each step individually and then we have created a simple function to execute them all together.

After creating a new network to capture the last Conv layer output, we have randomly selected one sample from test data and performed a forward pass through the network using this sample. The output of this network is the same as our original network which is 10 probabilities per sample. We can notice that the output of the last Conv layer is of shape (1,16,28,28) where 16 is the output channels of the conv layer and batch size is 1 because we have taken a single sample into consideration.

We have also printed the actual and predicted labels of the selected sample.

This is our last step where we have taken the average at the channel level (16 channels) on the output of the previous step. This will generate a heatmap of shape (28,28) which will have activations that contribute to the predictions. We generally normalize the outputs of the heatmap for better results.

In this section, we have visualized our original image and heatmap next to each other to understand the performance of Grad-CAM algorithm. We can notice from the results that the heatmap highlights activations that contributed to the prediction. 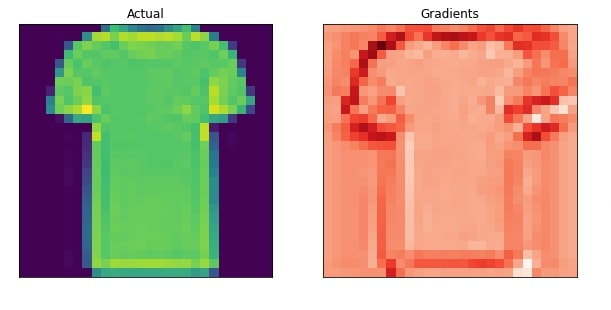 At last, we have called our method to generate a heatmap for the input sample and visualized it along with an actual image. 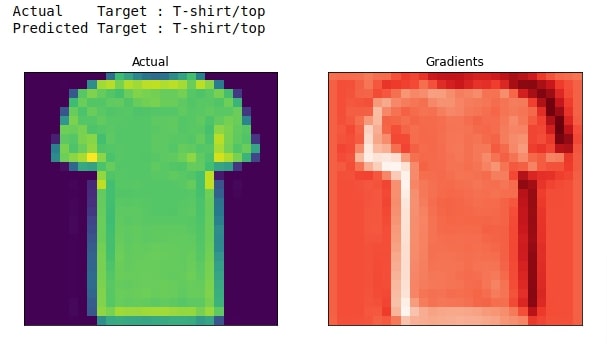 We have designed a network that captures the output of the first convolution layer. Then, we have called our method to perform steps of the Grad-CAM algorithm to generate a heatmap for our sample. At last, we have plotted the actual image and heatmap next to each other for comparison. 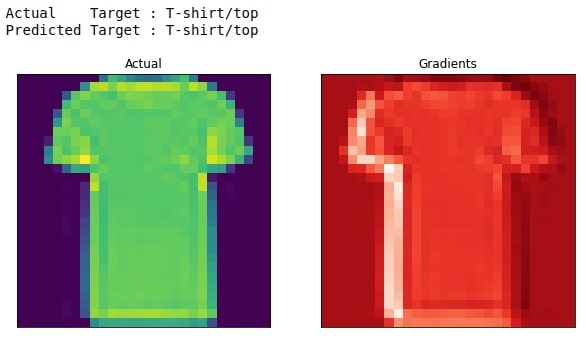 This ends our small tutorial explaining how we can design our Grad-CAM algorithm with PyTorch network. Please feel free to let us know your views in the comments section.