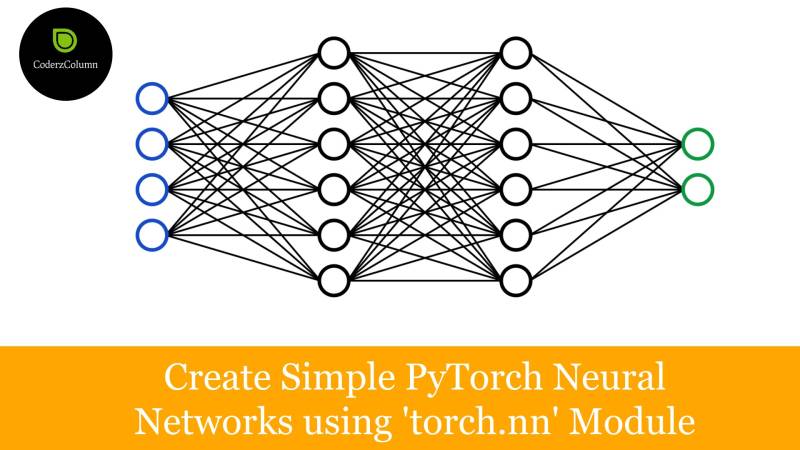 Pytorch is at the forefront of machine learning research with its pythonic framework to design neural networks. Pytorch provides a low-level numpy-like API to design a neural network from totally scratch as well as a high-level API where layers, loss functions, activation function, optimizers, etc are already defined and can be used without modification. We have already covered a tutorial where we discussed how we can create small neural networks to solve simple tasks using low-level PyTorch API where we have designed everything. Please feel free to check that tutorial as it'll help you with this tutorial.

As a part of this tutorial, we'll again explain how to create simple neural networks but this time using high-level API of PyTorch available through torch.nn module. We'll be working with small toy datasets available from scikit-learn to solve one regression and one classification task. We'll be creating small neural networks to explain the torch.nn API. We assume that the reader of the tutorial has little background on neural networks, loss function, optimizers, activation function, etc as we won't be covering them in detail here. The main aim of the tutorial is to get individuals started using Pytorch's torch.nn module to design neural networks.

Below we have imported PyTorch and printed version of it that we'll be using in this tutorial.

In this section, we have loaded the Boston housing dataset available from scikit-learn. We have loaded data features into variable X and target values in variable Y. After loading the dataset, we have divided it into the train (80%) and test (20%) sets. We have then converted datasets loaded as numpy array to torch tensor as the neural network requires an input of that type. We have also recorded a number of samples in training data and a number of features of data in separate variables.

In this section, we'll explain how we can define a neural network using torch.nn module.

Below we have first defined our Regressor class by inheriting from nn.Module class. We have then defined three linear or dense layers inside of init() method which are hidden layers of our neural network. Then we have defined the final layer of our neural network. We have used nn.Linear() method for defining layers of our neural network. The nn.Linear() method takes as input number of units from the previous layer as first parameter and number of units for current layer as the second parameter. For the first layer, there is no previous layer but input data hence the number of input units will be the same as the number of features. The Linear() method will initialize the weights and biases of the layer. It has a bias parameter which is True by default to include biases for layers. We can set it to False if we don't want biases in the layer. We have defined Relu (Rectified Linear Units) as an activation function for hidden layers. All our layer objects and activation objects can be used as methods and can be called parenthesis.

Below we have created an instance of Regressor class and then called it to perform a forward pass through our data. We have given the first 5 entries of our train data as input to it to make predictions.

The function executes the loop number of epochs time. It first performs a forward pass-through model with data features and makes predictions. It then calculates loss using the loss function by giving it predictions and actual target values as input.

We have then called optimizer.zero_grad() function. The reason behind calling this function is that we need to remove any previous gradient values present in our parameters before we call backward() on loss as backward propagation will add gradients to existing gradients and if we already have values there then it'll create a problem.

Then we have called loss.backward() method. This method actually performs a backward propagation algorithm and calculates gradients of loss with respect to input weights and biases.

At last, we have called optimizer.step(). This will actually update weights using learning rate and gradients.

We are also printing loss value at every 100 epochs to check progress.

Below we are actually performing training of our neural network. We have initialized a number of epochs, (1000), learning rate (0.001), neural network, loss function, and gradient descent optimizer. We have then called our training function with all these initialized values to perform training.

As this is a regression problem, we'll be using mean square error as our loss function. It finds an average of the squared difference between original target values and predicted ones. We have defined loss by creating an instance of MSELoss class available from torch.nn module.

We can notice from the MSE loss getting printed every 100 epochs that as it's reducing our model seems to perform better. We'll also evaluate the performance of our model later on test data using different metrics.

In this section, we have made predictions on train and test datasets using our trained neural network regressor.

In this section, we have evaluated the performance of our neural network regressor by calculating R^2 score on train and test predictions. We have used r2_score() method available from scikit-learn to calculate the score. The R^2 score generally returns the value in the range [0,1] where a value near 1 is a good score and indicates a good model. WE can notice from our results below that our model seems to have done a decent job at prediction.

If you are interested in learning about model evaluation and scoring metrics then please feel free to check our tutorial which covers various metrics available from scikit-learn with simple examples.

Even though our dataset is quite small, we'll assume that it does not fit into the main memory to explain how to perform training in batches and we'll treat the dataset in batches.

Our function loops the number of epochs times. Each time, it creates a number of batches and then uses batch numbers to create start and end indices of each batch. It then takes a single batch at a time by filtering the original dataset based on start and end indices, making predictions on batch, calculating loss, calculating gradients, and updating weights using gradients. This process is repeated for all batches of data. When we are done with all batches of data covering the whole dataset, it’s referred to as one epoch. We are recording a loss for each batch of data and printing the average of batch losses at every 100 epochs.

Below we are training our neural network in batches using the function we created in the previous cell. We have first initialized number of epochs (1000), learning rate (0.001), batch size (32), our neural network, loss function (MSELoss()) and gradient descent optimizer (SGD()). We have initialized SGD() by giving our model parameters and learning rate. At last, we have called our function by giving our model, loss function, optimizer, training data features, target values, batch size, and epochs as input. We can notice from the loss value getting printed at every 100 epochs that our network seems to be doing a good job.

Below we have called our function to make predictions in batches on train and test datasets.

In this section, we have evaluated the performance of our model by calculating R^2 score on train and test predictions. We can notice from the results that our model seems to be doing a decent job at prediction.

In this section, we have loaded the breast cancer binary classification dataset available from scikit-learn. The data features are loaded in a variable named X and target values are included in a variable named Y. We have then divided data into the train (80%) and test (20%) sets. We have also converted datasets loaded as numpy array to torch tensors as required by PyTorch models.

In this section, we have normalized our datasets. The code is an exact copy of the code from the regression section hence the detailed description is not included here.

Below we have initialized our classification neural network and made predictions on 5 samples of train data using it for testing purposes.

In this section, we have included functions to train the neural network. This function will train whole data in a single pass and the code for it is exactly the same as the one we had in the regression section. There is only one change from the regression section that we are printing log loss here instead.

Now, we are actually training our classification function by using a function defined in the previous cell. We have initialized number of epochs (1500), learning rate (0.01), neural network, negative log loss (NLLLoss()) and gradient descent optimized (SGD()). We have then called our training function with classification neural network, loss function, optimizer, train features, train target values, and the number of epochs.

In this section, we have made predictions on train and test datasets using our trained neural network. As we had explained earlier, the output of our neural network is probabilities, we have included simple logic to convert probabilities to actual class by calling torch.argmax() method. It returns the argument of maximum probabilities in the 1st axis which will be either 0 or 1.

In this section, we have evaluated the performance of our model by calculating the accuracy of train and test predictions. We can notice from the results that our network seems to be doing a decent job at prediction. We have also calculated classification report on test predictions using classification_report() function available from scikit-learn.

If you want to learn about the model evaluation and scoring metrics then please feel free to check our tutorial which covers various metrics available from scikit-learn.

In this section, we have included code for training our classification neural network on data in batches. The code for this function is an almost exact copy of the function we had in the regression section hence we have not included a detailed description here.

We can notice from the loss value getting printed at every 100 epochs that our model is doing a good job because loss is decreasing over time.

In this section, we have included the code for making predictions on data in batches using our neural network. The code for this function is exactly the same as the one from the regression section.

Below we have made predictions on the train and test datasets in batches (batch size = 32). We have then combined predictions of each batch and converted them to class from probabilities.

This ends our small tutorial explaining how we can create simple neural networks using a high-level torch.nn module of PyTorch. Please feel free to let us know your views in the comments section.

Please feel free to let us know in the comments section below (Guest Comments are allowed). We appreciate and value your feedbacks. If you like our work please give a thumbs-up to our article in the comments section below. You can also support us with a small contribution by clicking on Support Us link in the footer section.
Published On : Nov-16,2021 Time Investment : ~45 mins