Interpreting the results of the deep neural networks has become a quite common practice nowadays in a deep learning community. As the models become deep and complex that are hard to understand, we need to look at which parts of the input data are used by the model to make predictions. This can help us make better decisions and understand whether our model has generalized or not. Whether our model is using the parts of data that it generally makes sense to use for making predictions. Let's say for example in the cat vs dog image classification task, the model should use pixels in an image that contribute to cat or dog in the image and not some background pixels.

As a part of this tutorial, we have explained an algorithm named Grad-CAM (Gradient-weighted Class Activation Mapping) that let us look at parts of an image that contributed to the prediction. The grad-CAM algorithm uses the gradients of any target (say 'cat' in a classification network) flowing into the final convolution layer to produce a coarse localization map highlighting the important regions in the image for predicting the concept. Basically, it highlights activations that contributed most to predicting the particular category using gradients of the last convolution layer with respect to predicted output. The output of the grad-CAM algorithm is a heatmap with the same shape as that of the image which we can overlay over the image to see which parts of the image contributed to the prediction. Below, we have highlighted the steps of the grad-CAM algorithm.

The steps will become more clear when we explain with an example below.

In this tutorial, we have explained step by step guide to implement Grad-CAM algorithm for Flax (JAX) networks. We have trained a simple CNN on Fashion MNIST dataset and then interpreted the predictions using Grad-CAM algorithm.

Below, we have highlighted important sections of tutorial to give an overview of the material covered.

Below, we have imported the necessary libraries and printed the versions that we have used in our tutorial.

In this section, we have loaded the Fashion MNIST dataset available from keras. The dataset has grayscale images of shape (28,28) for 10 different fashion items. The dataset is already divided into the train (60k images) and test (10k images) sets. After loading datasets, we have converted them to JAX arrays as required by networks. Below, we have included mapping from the target class index to target class names for reference purposes.

Please make a NOTE that we have not covered a detailed description of network creation using Flax as we have already covered it in the below tutorials. Please feel free to check them if you don't have a background on Flax.

In this section, we have defined a loss function for our image classification task. We'll be using cross entropy loss for our purpose. The function takes network parameters, input samples, and actual target values of those samples as input. It then performs a forward pass through the network to make predictions and one hot encodes actual target values. Then, it calculates loss using softmax_cross_entropy() function available from Optax python library.

In this section, we have trained our CNN on the fashion MNIST dataset. Below, we have first defined a function that will perform the whole training process. The function takes training data (X, Y), validation data (X_val, Y_val), number of epochs, network parameters, optimizer state, and batch size as input. The function executes the training loop number of epoch times and returns updated network parameters at the end. During each epoch, it loops through training data in batches. For each batch of data, it calculates predictions, calculates loss value, calculates gradients, and updates network weights using gradients. It also keeps track of loss value for each batch and prints average loss at the end of one training epoch. The function also calculates validation accuracy at the end of the epoch and prints it.

Below, we are actually training our network using a function defined in the previous cell by initializing necessary parameters. We have initialized batch size to 256, epochs to 8, and learning rate to 0.001. Then, we have initialized the network, network parameters, and Adam optimizer. At last, we have called our training routine with the necessary parameters to perform training. We can notice from the loss and validation accuracy getting printed after each epoch that our model is doing a good job.

In this section, we have evaluated the network performance by calculating accuracy, confusion matrix and classification report metrics on test predictions. We can notice from the metrics results that our model is doing an almost good job in predicting each target category.

Below, we have calculated all metrics using functions available from scikit-learn. Please feel free to check the below link if you want to learn about various ML metrics available through sklearn.

In the next cell after the below cell, we have plotted the confusion matrix. We can notice from the results that our model is not doing that good job at predicting category Shirt and confusing it very often with category T-shirt/top. This makes sense as images of both categories look almost the same but still, we can try different models to improve better accuracy.

Please feel free to check the below tutorial if you want to learn about scikit-plot. 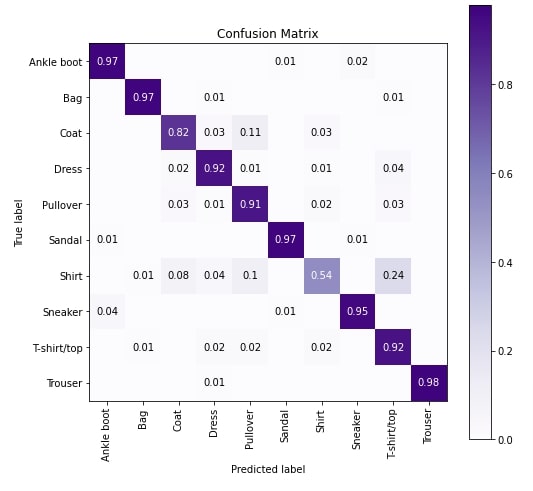 In this section, we have explained a step-by-step guide to implement Grad-CAM algorithm using Flax (JAX). We have implemented Grad-CAM in this section with respect to the last convolution layer. The reason behind this is that the last layer has final combined patterns of previous layers which are then fed to dense layers before making decisions. All other convolution layers also learn different patterns and we'll look at them in the next sections.

After defining the network, we have randomly selected one sample from data and performed a forward pass through this new network to capture the output of the last convolution layer. In order to perform forward pass, we have used network parameters which are trained network parameters of our original network. We can notice from the result that the output shape of our convolution layer is (1,28,28,16) where 16 represents output channels and batch size of 1 represents a single sample.

2. Calculate Gradients Of Prediction With Respect To Output Of Last Conv Layer¶

In this section, we have calculated the gradient of the last convolution layer output with respect to maximum prediction probability. In order to perform this step, we have designed another simple network that takes the last convolution layer output as input and returns network prediction after applying a linear layer to it as in our original network. In short, here, we are performing the remaining half of our network forward pass. The network returns 10 probabilities per sample.

After defining the network, we have defined a function that takes as input convolution layer input and returns maximum probability by performing forward pass through below network. To perform forward pass, it uses trained network parameters that we had from the training of our network earlier.

In this section, we have averaged gradients in a way that after averaging we have values that are the same as the output channels of the last convolution layer. In our case the shape of gradients is (1,28,28,16), hence we have first squeezed it to remove extra dimension from the beginning (new shape (28,28,16)) and averaged at 0th & 1st axis to get 16 values as output which is same as the last convolution layer output channels.

This is the last step in our algorithm where we have calculated the average of output from the previous step at the channel level. This way the output will be of shape (28,28) which is the same as the shape of our image and we'll call it heatmap. This heatmap can be visualized and compared with the original image to look at activations that contributed to the prediction of a particular category. We also generally normalize the heatmap for better results.

In this section, we have visualized the original image and heatmap next to each other to compare and look at activations contributing to prediction. 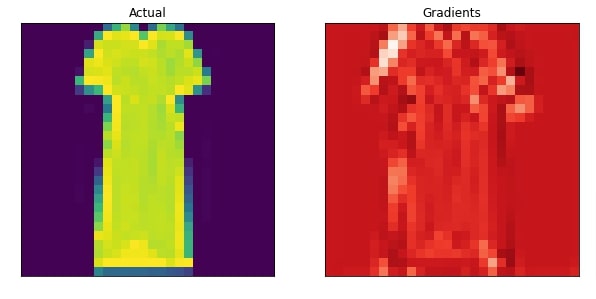 In this section, we have performed the Grad-CAM algorithm with respect to the output of the second last convolution layer. We have followed almost the same steps as we explained in the previous section. The major difference is in how we created two networks. We generally split our original network at the layer where we want to perform Grad-CAM algorithm. 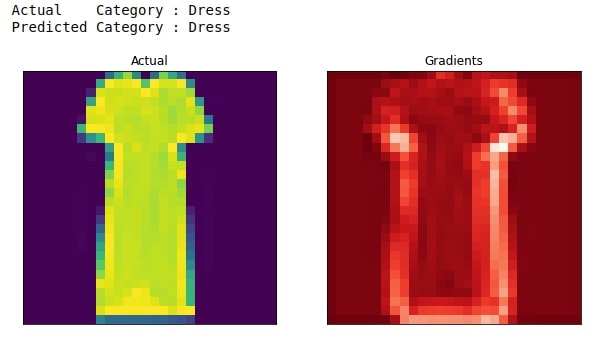 In this section, we have performed Grad-CAM with respect to the third last layer which is actually the first layer of our network. 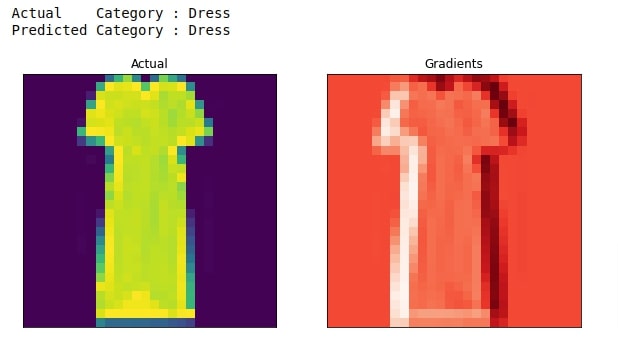 This ends our small tutorial explaining how we can perform Grad-CAM algorithm with Flax (JAX) image classification networks. Please feel free to let us know your views in the comments section.