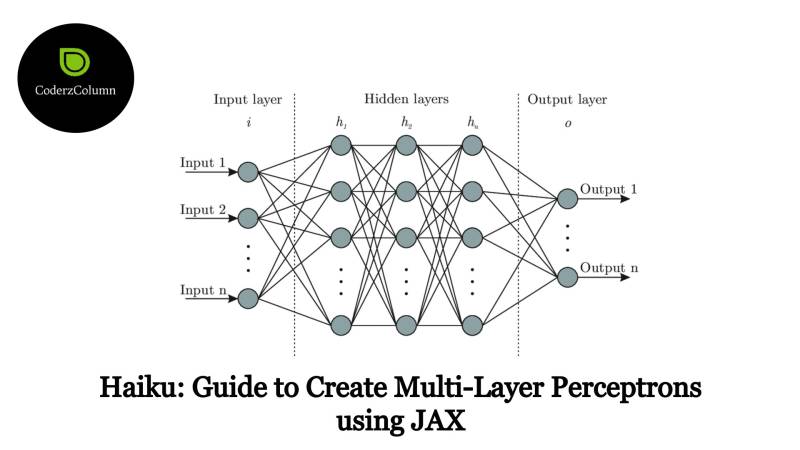 Haiku is a deep learning framework designed by deepmind on top of JAX to accelerate their deep learning experiments. Haiku provides built-in implementations for multi-layer perceptrons, convolutional nets, etc. As Haiku is designed on the top of JAX, a little bit of background with JAX can help better understand Haiku.

Haiku is designed to let developers use object-oriented programming approach to design neural network and at the same time use JAX's function transformations (grad(), jit(), vmap(), pmap(), etc ) on the object-oriented code. All JAX's important functions are designed to work with functions rather than class and when we design neural networks, we generally define it using class (OOP). Haiku makes it possible to use OOP-designed modules/classes like pure JAX functions.

As a part of this tutorial, we'll be explaining how we can create simple multi-layer perceptrons using Haiku. The main aim of the tutorial is to introduce individuals to Haiku framework. We have created two small examples explaining how we can use Haiku with small toy datasets to solve regression and classification tasks.

As we have used JAX in this tutorial for some tasks, if you want to learn about JAX then please feel free to check our tutorial on it.

In this section, we'll explain how we can create a simple multi-layer perceptron using Haiku to solve simple regression tasks. We'll be using a small dataset available from scikit-learn for our example.

Scikit-learn loads dataset as numpy arrays. We have also converted all our datasets from numpy to jax arrays.

In this section, we have normalized our datasets. Normalization is generally performed to bring all features values to the same scales so that optimization algorithms of our neural network converge faster. If values are on a different scale which varies by big amount then it can make the optimization process harder and it'll take more time for the algorithm to converge due to variance in feature values.

The majority of neural networks that we create with Haiku are a subclass of haiku.Module class. We need to transform all class-based models to function based and we can do so by using hk.transform() function. It takes as another function and transforms function to pure jax functions.

We have first defined our MLP with layer sizes [5,10,15,1] inside of another function. We are providing input data to that function and calling our MLP instance with input data and returning it. This function basically creates a neural network and performs forward pass through input data. It returns predictions at last. We have transformed this method using hk.transform() method. It returns a transformed object which has two methods.

In this section, we are training our neural network.

First, we have defined a simple function that takes weights and gradients as input. It then subtracts learning rate times gradients from weights. We'll be using this function to iteratively update the weights of all layers.

In our case first output will be MSE loss value and second value will be gradients of MSE with respect to weights (first parameter of MeanSquaredErrorLoss()).

Then on the next line, we have logic to update the weights of our neural network. We have used jax.tree_map() function for updating weights by subtracting learning rate times gradients. The jax.treemap() function takes function followed by arguments of function as input. The input arguments have a tree-like structure. It then performs a given function on each leaf of input arguments. This process of updating weights based on learning rate and gradients is generally referred to as gradient descent

In our case, weights are the tree-like structure that we had printed when we defined the neural network earlier. The gradients will be in the same structure. We are then applying the update weights function which we declared in our previous cell to each leaf of our weights and gradients. This function will return a new tree-like data structure with weights updates based on gradients and learning rate.

In this section, we have made predictions on our train and test datasets using apply() method of our model.

If you are interested in learning in detail about R^2 score and other metrics available from scikit-learn for different kinds of tasks then please feel free to check our tutorial which covers the majority of metrics in detail with examples.

Train Model in Batches of Data¶

We have initialized model weights first using the seed of random numbers. We have then initialized a number of epochs (500), batch size (32), and learning rate (0.001). We have then executed the training loop number of epochs time. Each time, we have generated indexes for batches of data. We are then looping through the whole data in batches. For each batch, we calculate loss and gradients and then update model weights using gradients. We are updating the weights of the model for each batch of data.

We can notice from the MSE loss getting printed at every 100 epochs that our model seems to be doing a good job.

As we can not fit whole data into the main memory of the computer, we need to do predictions also on a batch of data. Below we have defined a function that takes updated model weights and input data. It then loops through data in batches making predictions on a batch of data at a time. It then combines predictions of all batches and returns them. It uses the same logic to create batch indexes that were used during the training section to create batches.

We have then used the function to make predictions on train and test datasets.

In this section, we have evaluated the performance of the model by calculating R^2 score on train and test predictions.

After loading the dataset, we have divided it into the train (80%) and test (20%) sets. We have also converted datasets held in numpy arrays to jax arrays.

In this section, we have normalized our train and test datasets using the mean and standard deviation of features calculated on the training dataset.

In this section, we have designed a neural network that we'll be using for our binary classification task. The network design is exactly the same as that of the regression section. As Haiku MLP() constructor does not let us explicitly specify activation function for the last layer, we have separately added a sigmoid() activation function in our loss function to be applied to the output of the neural network. We'll apply sigmoid() function available from jax.nn module when making predictions as well.

In this section, we have defined a loss function that we'll be using our binary classification task. We'll be using log loss for our task.

In this section, we have included the logic to train the neural network. Our logic to train a neural network is the same as the logic we used in the regression section. Only our parameter settings and loss function are different. We have set the number of epochs to 1500 and the learning rate to 0.001. We can notice from the loss value getting printed every 100 epochs that our model seems to be doing a good job.

In this section, we have made predictions using the latest weights on train and test datasets. After making predictions using apply() method, we have applied jax.nn.sigmoid() function to outputs to bring all output values in the range [0-1]. We have set the threshold at 0.5 to predict the target class. The values less than 0.5 will be predicted as 0 (benign tumor) and values greater than 0.5 will be predicted as 1 (malignant tumor).

In this section, we have evaluated the performance of our model by calculating the accuracy of train and test predictions. We can notice from the results that our model seems to be doing a good job.

Train Model in Batches of Data¶

In this section, we have included logic to train a neural network in batches. The code for this section is exactly the same as the code from the regression section with only changes in parameter values. We have set epochs to 500, batch size to 32, and learning rate to 0.001. We can notice from the loss value getting printed every 100 epochs that our model is doing a good job.

In this section, we have evaluated the performance of our model by calculating the accuracy of train and test predictions.

This ends our small tutorial explaining how we can use haiku to create simple multi-layer perceptrons. Please feel free to let us know your views in the comments section.

Please feel free to let us know in the comments section below (Guest Comments are allowed). We appreciate and value your feedbacks. If you like our work please give a thumbs-up to our article in the comments section below. You can also support us with a small contribution by clicking on Support Us link in the footer section.
Published On : Dec-17,2021 Time Investment : ~30 mins