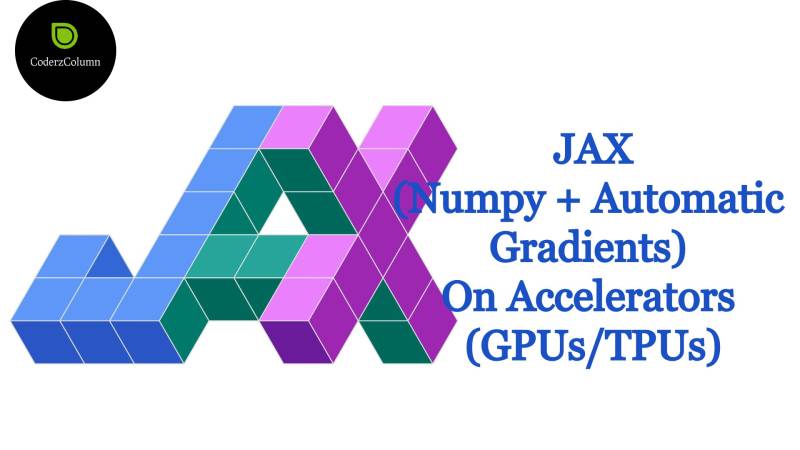 JAX is a python library specifically designed for making machine learning research easier. It provides the same API as that of numpy which lets us create multidimensional arrays and perform operations on them. All the arrays can be easily transferred from CPU to GPU/TPU and vice-versa. Arrays can be created directly on accelerators as well which does not need transfer across devices. Apart from this, it can compute an automatic differentiation of python functions. JAX is successor of famous automatic differentiation library Autograd. It can compute differentiation of almost any python code involving loops, conditions, recursion, etc, and can also compute differentiation of differentiation.JAX compiles code using XLA (Accelerated Linear Algebra) which fuses many operations to reduce the run time of the code based on underlying machine instructions and then run it on CPU/GPU/TPU. JAX can also provide just in time (JIT) compiler for running code fast on a single computer with multiple cores.

Below we have highlighted important features of JAX.

As a part of this tutorial, we'll be covering the basics of JAX where we'll try to explain basic features with a few simple examples. Below we have highlighted important sections of the tutorial to give an overview of the material that we have covered.

We'll start by importing jax, jax.numpy, and numpy as we'll be using this three in our tutorial.

In this section, we'll explain various ways to create a Jax array. The jax.numpy has almost the same API like that of numpy hence it has the majority of functions the same as numpy. The little background with numpy will make this tutorial quite easy to grasp.

Below we have created a JAX array by using arange() function which starts at 0 by default and increments value by 1 till it reaches 10. It has parameters start, stop step, and dtype for generating different arrays according to needs.

The list of devices can be found by calling jax.devices() function. It returns a list of Device instances describing individual devices. This list has more than one entry if there are multiple GPUs.

We have created this tutorial on CPU hence all our arrays will be on CPU.

We can also create an array by using array() method giving it any numpy array or Python list. Below we have created a jax array from a simple python list.

There are also methods like ones() and zeros() like numpy which accepts array dimensions as input and creates an array with all elements one or zero.

We also have methods like eye() and diag() which let us create an array with elements on the diagonal of the array.

The eye() method accepts a single dimension and it'll create a square array of that shape where all elements on diagonal will be one and all other elements will be zero.

The diag() method accepts single dimension array as input. It then creates a two-dimensional array where elements of the input array will be kept on diagonal and all other elements will be set to zero.

Below we have created a new array using arange() method and then reshaped it from one dimension to a two-dimensional array.

The ravel() method transforms the array of any time into a one-dimensional array. It basically flattens an array.

Below we have flattened our two-dimensional array which we had created earlier.

We can find the transpose of an array by calling transpose() method on it or by calling T attribute of it.

Below we have transposed our two-dimensional array.

We can also find our dot product of two arrays using dot() function. It accepts two arrays as input which needs to be multiplied.

We can add two arrays of the same dimension using add() method as explained below.

We can find an index of minimum and maximum elements of the array using argmin() and argmax() methods.

It also accepts axis argument which specifies the axis according to which find a minimum or maximum. By default, it'll find min/max considering array is of single-dimensional hence will return index which will not be according to the dimension of the array which is more than one dimension. We can ravel the array and then use an index to find the min/max array. We can also find min/max according to a particular axis using axis attribute.

Below we have explained usage with simple examples.

We can find the minimum element of the array using min() element.

By default, it'll return the minimum element of the array.

If we want then we can find minimum elements across various axes as well using axis parameter.

Below we have found minimum element across all rows of array.

This method works exactly like min() but finds the maximum element.

This function helps find an average of the whole array or across different axes.

The var() function helps us find the variance of the array. We can use axis parameter to find variance across different axes.

We can generate an array of random integers in a particular range using randint() function. We need to provide seed for generating random numbers as the first parameter followed by the shape of the output array and range as the minimum and maximum values.

We can generate normal random values using normal() function. We need to give it seed followed by the shape of the expected output array.

In this section, we'll explain how we can create a simple python function and pass jax arrays to it. We'll be performing simple operations on jax arrays through function. This section will build the background for the next section which is automatic gradients of functions.

Below we have created a simple function that takes three parameters as input. It then squares the first parameter x. Then it multiplies parameter m with the squared value of x and adds parameter c to it. At last, it returns the sum of all values of the output array.

Below we have created an array with different values and called our function designed above to check whether it’s working properly. We can notice from the output that it seems to do the job.

We'll be using this function in the next section and try to find out the gradient of it.

JAX provides a function named grad() which can be used to find out the gradient of function working with jax arrays.

Below we have calculated the gradient of our function from the previous section. By default, grad() function will find out gradient with respect to the first parameter which is x in our case. We have then evaluated the gradient by giving input data (arr,m, and c) as well.

As our earlier function was easy to understand, we can calculate the gradient of it as well. It'll be m*2x. We can then give x and m parameter values to calculate the gradient. We have given as input x (array of size 2x2 with all elements set to 1), m (scaler value of 10) and c (scalar value of 5). To find out the gradient of the function first all elements of x will be multiplied by 2 and then will be multiplied by 10 (value of m).

Below we have explained another example, where we are finding out the gradient of our input function with respect to all three parameters.

There are situations where we need our user-defined functions to work on a bunch of elements in parallel and combine results. JAX provides a function named vmap() for this purpose. It’s short for vectorized map and as its name suggests it works like the python map() function of python but it takes as input Jax arrays and lets us specify which axis of an array to use to vectorize operations.

Below we have first created an array of size 3x2x2 whose elements will be used as input for parameter x of our function. We'll be vectorizing this array at axis 0 hence all 2x2 arrays will be given as the value of parameter x of function.

Below we have vectorized our function which we had defined in the working with functions section and used in the automatic gradients section. We have vectorized input for parameter x at the 0th axis of the input array.

Below we have explained another example where we are vectorizing gradient of a function.

Below we have created another example where we have vectorized function at 2nd parameter m. We have given a single array of size 2x2 for parameter x and a single scalar value for parameter c. For parameter m, we have declared an array of 3 elements.

In the next cell, we have created another example where we are vectorizing function for two input parameters (m and c). The value of parameter x is a fixed 2x2 array.

Below we have vectorized the gradient of our input function for all three input parameters.

In order to use XLA to speed up operations, JAX provides us with a method named jit(). We can either wrap any existing method inside of jit() method and it'll speed it up or we can also decorate that method with @jit decorator to speed it up.

Below we have taken our existing function which we had been using in our previous sections and wrapped it inside of jit() method to speed it up. We have then called normal function and jit-wrapped functions a few times to compare their performance. We have also recorded the time taken by each call for comparison.

The speedup provided by the jit-wrapped function becomes more visible as the size of Jax arrays increases.

In this section, we have explained how we can combine vmap() and jit() functions to increase the speed of the computation a lot.

This ends our small tutorial explaining JAX library and various functionalities provided by it. Please feel free to let us know your views in the comments.

Please feel free to let us know in the comments section below (Guest Comments are allowed). We appreciate and value your feedbacks.
Published On : Oct-30,2021 Time Investment : ~30 mins