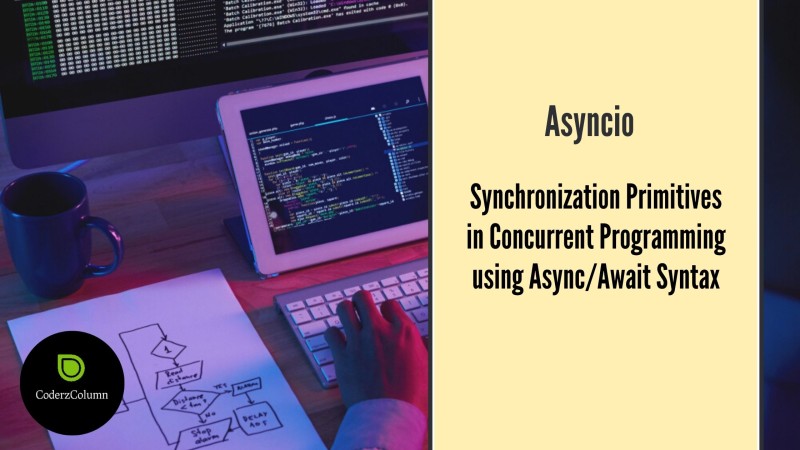 Python module asyncio provides API which lets us write code that runs concurrently. We have already discussed in detail how we can use asyncio module to create tasks, run them in parallel, make tasks wait for other tasks, cancel tasks, etc. Here's a link to that tutorial.

Please make a NOTE that our tutorial expects that reader has background knowledge of using asyncio to create tasks, cancel tasks, etc. If you are interested in learning about them then please check our tutorial on the same before beginning with this tutorial as it'll help you grasp the material of this tutorial soon.

Our examples in this tutorial are inspired by our examples of Python threading module tutorial. Please feel free to check it if you are interested in learning in-depth about working with threads using Python.

Our main coroutine will start by creating three tasks each of which will call Raise with the argument of 3 asking it to raise global variable X to the power of 3. We are then waiting for the completion of each task. We are executing our main coroutine using asyncio.run() method. We are also noting the time of execution.

Please make a NOTE that we'll use terms tasks and coroutines interchangeably but both will refer to the same thing.

As a part of our this example, we are explaining how we can introduce lock to the previous example so that concurrent access to shared global variable can be controlled and inconsistencies can be prevented.

Our code for this example has modified the definition of Raise() coroutine. It now takes two arguments where the first argument is Lock instance and the second argument is number for raising global variable. We have then wrapped code inside of Raise() coroutine between call of acquire() method and release() method of Lock instance. This will make sure that the code inside between these two method calls will be executed by only one coroutine at a time. This will make sure that only one coroutine modifies the global variable X at a time.

Our main coroutine creates an instance of Lock and passes it to each task executing Raise.

When we run the below script, we can notice that it now lets only one coroutine access to global variable X and modify it. We can also notice that output is now correct when compared to the previous example.

Our code for this example is almost the same as our code for the previous example with only change that we have introduced the usage of locked() method.

We have introduced a while loop inside of Raise() coroutine which checks if the lock is locked and if it’s locked then it puts calling coroutine to sleep for two seconds. We are also printing messages to log information about which coroutines went to sleep and which one got access to the lock.

When we run the below script, we can notice from printed messages that how coroutines are trying every two seconds for accessing the lock.

1.4: Lock as a Context Manager¶

When we run the below script the output is exactly the same as the output from example 1.2.

If you are interested in learning about context managers then please feel free to check our tutorial on the Python module named contextlib which provides a list of methods for creating context managers.

Please make a NOTE that wait() method releases the lock which was acquired when waiting for the condition. When the condition is fulfilled, all notified coroutines try to acquire the lock and one of them succeeds to acquire it and proceed.

Our code for this example has 2 coroutines.

Our main coroutine starts by creating a condition instance. It then creates five tasks each of which executes set_item() method with random numbers in the range 1-50. We then create 5 other tasks which execute process_item() method. We keep track of all 10 tasks and make the main task wait for the completion of all tasks.

Our code for this example is almost same as our code from the previous example with only change that we are explaining the usage of wait_for() in this example. We have created a method named is_global_var_set() which returns True if X is not set else False. We have removed while loop from process_item() coroutine and have used wait_for() method instead. We have also created our own Lock instance and have passed it to Condition. The remaining code is exactly the same as the previous one.

2.3: Condition as a Context Manager¶

Our code for this example is exactly same as our code for the previous example with only change that we are calling notify_all() method instead of notify() this time.

As a part of our third example, we'll demonstrate the usage of Semaphore primitive which lets a specified number of coroutines access shared resources. This can be used in a situation where shared resources can be modified/access concurrently by a specified number of coroutines (Like 5 tasks can concurrently access DB at a time.).

Our code for this has created three coroutines.

We are then running main() coroutine through asyncio.run() method. We have also recorded running times.

When we run the script, we can notice from the output that only 3 tasks are able to access global variable X through use_connection() coroutine at a time. Even though we have created 10 tasks, only 3 will be executing use_connection() at a time.

3.2: Semaphore as a Context Manager¶

Our code for this example is exactly the same as our code for the last example with the only change that we are using Semaphore instance as context manager inside of process_item() coroutine. This frees up from calling acquire() and release() methods on it.

The output of running this script is almost exactly the same as our previous example.

Our code for this example has created three coroutines.

Our code then runs main() coroutine using asyncio.run() method. We have also recorded time of running.

This ends our small tutorial explaining how we can use synchronization primitives available from asyncio module when creating concurrent code with async/await syntax. Please feel free to let us know your views in the comments section.