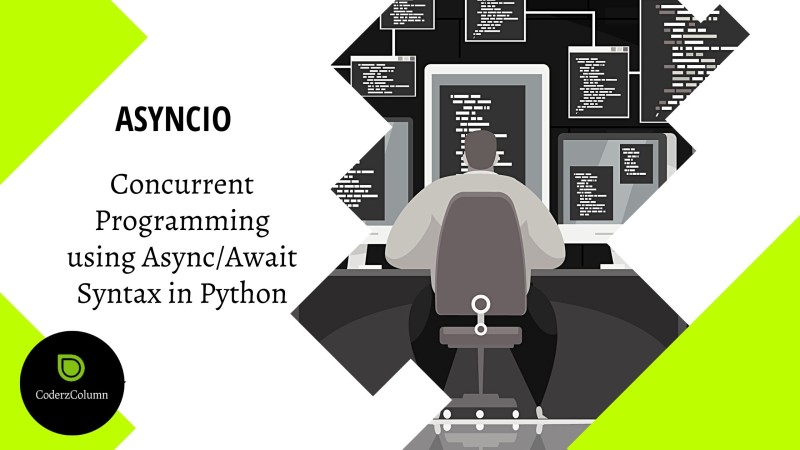 Async/Await is a programming pattern that allows us to asynchronously execute a function without blocking. The normal function would execute line by line and will only proceed to execute a line after it has completed running all previous statements in sequence. This might not always be necessary. There are functions in which parts of the function are not dependent on each other and can be run out of sequence to generate results. The CPU can be assigned to other statements of the function when a particular statement has not returned and is waiting for IO, network input, etc. Async/Await programming lets us run a function in parallel in a single thread of the computer where tasks of the functions explicitly giving up CPUs when they don't need it.

Python provides support for Async/Await programming using async, await keywords, and asyncio module. Python lets us declare functions with async keyword hinting to the Python interpreter that it is suitable for an asynchronous run. The functions declared with async keywords are generally referred to as coroutines in Python because they yield CPU when not using it. We can then use await keyword which will hint Python interpreter that the statement awaited with await will return eventually and the interpreter can in meantime continue execution with the next statements of the function as they might not be dependent on that awaited statement result. Only functions declared with async keyword can be awaited using await keyword in Python.

As a part of our first example, we'll simply explain how we can create a code with async/await syntax and run it.

Our code for this part creates few functions whose use we have explained below.

All of the functions are declared with async keywords to mark them as coroutines. All four arithmetic operations functions have await which calls a function that waits for a specified number of seconds.

Our main function is another asynchronous function that awaits all arithmetic function completion. We have called all functions with different arguments.

We are then running our asynchronous main function using run() method of asyncio module. It executes a coroutine function.

We can notice from the output that each function has run in sequence and not in parallel. It takes nearly 16 seconds to complete the script. The reason that code does not execute in parallel is because we have not created tasks out of functions that are eligible to run in parallel. We'll explain how to create tasks to run this code in parallel in example 3.

Our output for this example is the same as the previous example because we still have not created tasks to run coroutines in parallel which we are going to explain in the next example. This example also takes 16 seconds to complete taking full time for each coroutine.

As a part of our third example, we'll explain how we can create a task around coroutines and execute them in parallel using asyncio module method create_task().

Our code for this part has declared arithmetic functions exactly like the previous example. Our main function has wrapped call to each arithmetic coroutine inside of asyncio.create_task() method. The method will return Task object. We have then awaited each task instance inside of the main function waiting for them to complete. We are then executing our main coroutine like previous examples.

Please make a NOTE that once we create a task using create_task() method, it starts executing coroutines and returns Task instance immediately. We can use this task instance for various purposes like cancel tasks, wait for the task to complete, etc.

As a part of our fourth example, we'll explain how we can call many awaitable instances using a single method then calling await keyword many times. We'll explain the usage of gather() method which runs awaitables as tasks in parallel.

4.1: Using gather() with Coroutines which does not Returns Result¶

We can notice from that output that all coroutines have executed in parallel even though we had not created tasks out of them. The reason behind this is that gather() method creates a task for each coroutine passed to it. It takes nearly 7 seconds to complete this code running like the previous example.

Our code for this part has modified the definition of four arithmetic coroutines. Instead of printing results, they now return two tuples where the first value of the tuple is the name of the operation and the second value is the actual result.

The main coroutine now captures the result returned by gather() method inside a variable and then prints it. The rest of the code is exactly the same as in previous examples.

When we run the script, we can notice from the output that it also takes 7 seconds to complete like previous examples and returns the same results as previous examples. The only difference in the output is the sequence in which operations are printed. We can notice that we are printing results in exactly the same sequence in which we had given coroutine as input to gather() method.

As a part of our fifth example, we'll demonstrate how we can wait for the list of awaitables and returns awaitables which has completed running using as_completed() method.

Our code for this example uses the same four arithmetic coroutines as the example previous example. Our main coroutine has two-part.

The second part of the code is the same as the first part with two minor changes. The first change is that there is a timeout of 4 seconds introduced inside of as_completed() function which will timeout after 4 seconds and won't execute any pending coroutines/tasks. The second change is that call to as_completed() is wrapped inside of the try-except block to catch and print error.

As a part of our sixth example, we'll explain how we can make a task/coroutine wait for other task/tasks to complete using wait() method of asyncio module.

Please make a NOTE that wait() method accepts a list of tasks as input and not coroutines. It's deprecated to pass coroutines. Hence we should first create a task around coroutine and pass it to the method.

Our code for this example has exactly the same four arithmetic coroutines that we have been using for the last many examples. The code for the main coroutine has two parts.

The second part of the call has the same settings as that of the first part with two changes. The wait() method has been given a timeout of 4 seconds. Which will force the wait method to return after 4 seconds and returns tasks which are done and the ones which are pending. The other change is that we have wrapped the code of the second part inside of the try-except block to capture any errors.

When we run the script, we can notice from the output that the first part of the code completes by running all tasks given to wait() method whereas the second part returns after completion of two tasks return other two tasks as pending.

As a part of our seventh example, we'll explain how we can make coroutine wait for another coroutine to complete using wait_for() method of the asyncio module.

Our code for this example has used addition function from the previous example. It has created a new coroutine named Raise which accepts 3 compulsory parameters and one optional parameter. It wraps call to addition coroutine on first two parameters inside wait_for() method. The timeout parameter given to Raise is passed to wait_for(). The Raise then sleeps for 1 second and returns the result of addition coroutine raised to third parameter p. We have wrapped the code involving wait_for() method inside of the try-except block to catch any exception and set results to 0.

Our main coroutine calls await Raise coroutine with different parameters. The rest of the code is the same as the previous example which executes the main coroutine using run() method of asyncio and captures the time taken.

Our code for this example builds on code that we have used till now for various examples. We have modified the definition of all arithmetic coroutines. We are getting Task instances inside of each coroutine and printing statements saying that the task has started execution. We are then pausing tasks for few seconds (asyncio.sleep()) and returning the result.

Our main subroutine creates four tasks for four arithmetic coroutines. It then prints a total number of tasks and their names using total_tasks() method of asyncio. It then awaits all tasks for completion. After all the tasks have completed, it again retrieves a list of pending tasks and prints their count as well as names. After that, it prints the results of completed tasks.

The rest of the code is the same as the previous example which runs the main coroutine.

As a part of our ninth example, we are demonstrating how we can cancel an ongoing task using cancel() method of Task instance.

Our code for this example builds on the previous example. We have used four arithmetic coroutine from the previous example but we have wrapped their code inside of the try-except block to catch CancelledError exception. We have raised the error again after printing its details so that caller of arithmetic coroutine can capture them again. This will make sure that cancelled() method of Task instance returns True when the task is canceled.

Our main coroutine starts by creating a task for each arithmetic coroutine. It then prints a list of existing tasks and their names. We are then putting the main coroutine to sleep for 4 seconds. After that, we are checking for a list of tasks about their completion using done() method of Task instance. If the task is completed then we print their name and if the task is pending then we cancel it with a message using cancel() method of Task instance. We have also put a check for the main coroutine task so that we don't cancel our main task by mistake. Our code then awaits completion for each task. The await statements are wrapped in try-except block to catch any error (CancelledError). At last, we are printing the results of the tasks by checking whether the task was canceled or not. If the task was cancelled then we print the result as 0 else we print the result retrieved using result() method of Task.

When we run the script, we can notice from the output that after the main task has paused for 4 seconds, only addition and multiplication tasks have completed running. The division and subtraction tasks are pending and hence canceled. Both tasks prints cancellation message and then we see the result of tasks execution.

This ends our small tutorial explaining the usage of (async, await) keywords, and asyncio module methods with simple and easy-to-understand examples. Please feel free to let us know your views in the comments section.